Transport has always played an important role in the war, it was used for the prompt transfer of troops to the area of ​​operations, the transportation of ammunition and food, and the evacuation of the wounded from the battlefield. But only in the first half of the XNUMXth century with the beginning of mass mechanization of the armed forces, the advent of cars, tanks and aircraft, the importance of the supply of all types of fuel has multiplied. Before the mass arrival of automobiles in the army, horse-drawn transport was mainly used, even in the first third of the last century it was horses that transported the most army cargo, although already during the First World War more and more trucks began to appear in the armies, tanks rolled out onto the battlefields, and air battles ensued in the sky.

However, even then some commanders did not believe that tanks would play a key role on the fields of future battles. In the USSR, there were opponents of army mechanization, since this was accompanied by a reduction in cavalry units. However, in the end, everyone understood that the country needed a modern army, which simply cannot become such without tanks and road transport. The massive use of mechanized compounds made it possible to overcome long distances in short periods of time. At the same time, there was one very important problem - the supply of troops with fuel and lubricants. Without fuel, cars and armored vehicles became just a pile of metal. This required the command to create a special rear service, which would engage in the timely replenishment of fuel and lubricants, including during offensive operations. 17 February 1936 by order of the People's Commissar of Defense of the Soviet Union KE Voroshilov in the country, the Fuel Supply Authority of the USSR was established. That is why the Day of the Fuel Service of the Russian Armed Forces is celebrated annually on February 17. 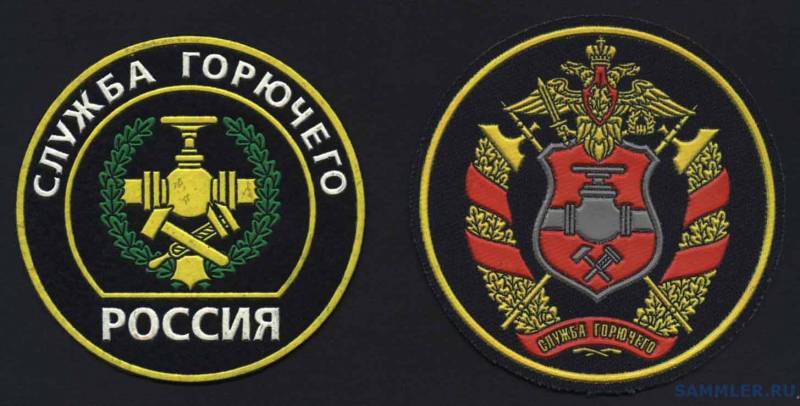 The first truly serious test of the readiness and professionalism of the Fuel Service was the provision of fuel to Soviet units that were fighting at Lake Hassan. In just two weeks of fighting with Japan, more than 8 thousand tons of various fuels were spent at that time. The following year, from May to August 1939, during the fighting on the Khalkhin-Gol river, Soviet troops spent almost 87 thousand tons of fuel and lubricants. And during the winter war with Finland in 1939-1940, the Red Army troops already spent 215 thousand tons of fuel. With the growth of mechanization of parts and formations, the needs of the troops for fuel also grew. By June, 1941 was able to create very large (at that time) mobilization reserves of fuel - on the order of 1,2 million tons (97 percent of the planned volumes).

World War II was the first conflict in which tank forces were massively used by all parties to the conflict. For the Wehrmacht at the first stage of the war, tank and mechanized units became the main guarantee of successful operations, in which the Germans succeeded seriously. The first months of the Great Patriotic War turned into a real catastrophe for the Red Army, a huge number of units were defeated, many warehouses and property were lost, by the end of the year more than three million Soviet servicemen were lost in German captivity, but our country survived a terrible fight with the aggressor. At the same time, the Fuel Service did not let the army down even in these difficult conditions, Marshal of the Soviet Union Alexander Vasilevsky wrote about this in his memoirs after the war. He made a special emphasis on the fact that not a single major operation was failed due to lack of fuel. Even in Leningrad, blocked by the enemy from land, it was possible in record time to organize the delivery of fuel and lubricants, which were enough to ensure the defense capability of the city.

Already in the first military summer in August, 1941, together with the creation of the Red Army’s Main Logistics Directorate, the Fuel Service was transferred to the country's Deputy People's Commissar for Defense, the head of logistics, under whose leadership she conducted her activities during the war years. During the Great Patriotic War, the specialists of this service provided the need of the army fighting the enemy for fuel and lubricants, as well as for technical means. To achieve victory in the war with Nazi Germany, the Soviet armed forces spent 16,4 million tons of petroleum products, while the Fuel Service provided 50 with major strategic operations of front groups, more than 250 front operations and about one thousand army operations and an uncountable number of smaller battles and battles . The successes of the Fuel Service and other rear units are evidenced by the fact that more than half of their officers were marked by government awards at various levels during the war. 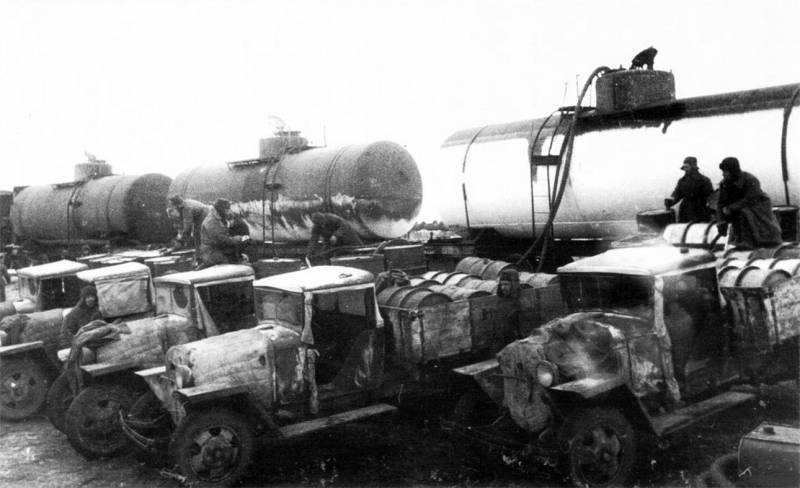 The Cold War, which began after the end of World War II, provoked an arms race between two superpowers - the United States and the Soviet Union; the result was the emergence and spread of rocket forces. Therefore, the Fuel Service had to develop fundamentally new types of fuel, which required increased precautionary measures. However, this task in the Fuel Service was able to cope with honor.

Another very serious test for the Fuel Service was the fighting in Afghanistan. The delivery of fuel to this country was complicated by the mountainous terrain, as well as by the numerous ambushes of dushmans who organized attacks on the “threads” that brought not only fuel but also ammunition and food to the Soviet troops. In total for 9 years and two months of conflict, 6,8 million tons of fuel were supplied to the territory of Afghanistan from the Soviet Union, including 5,4 million tons (about 80 percent) built by field trunk pipelines, and 1,4 million tons were delivered to the country by river. and air travel. In addition, 10 thousand tons of rocket fuel was delivered to Afghanistan by air. More than 6, thousands of Fuel Service specialists, underwent military service in Afghanistan. During all the years of conflict, the suppliers showed a high level of professionalism, providing the units with all the necessary fuel and lubricants, right up to the withdrawal of the entire group of Soviet troops from that country.

The Fuel Service has also demonstrated its readiness to perform the various tasks assigned to it while ensuring the supply of water for extinguishing the 1972 fires of the year, which in their scope and consequences could be attributed to a national scale disaster. This service also played its role in liquidating the consequences of the accident at the Chernobyl nuclear power plant, as well as ensuring the supply of drinking water to the cities and villages of Armenia destroyed by the 1989 earthquake of the year, the press service of the Russian Defense Ministry notes. In the future, the Fuel Service again showed itself well in combat operations, now in Chechnya, providing the howling federal troops with the necessary fuel and lubricants. 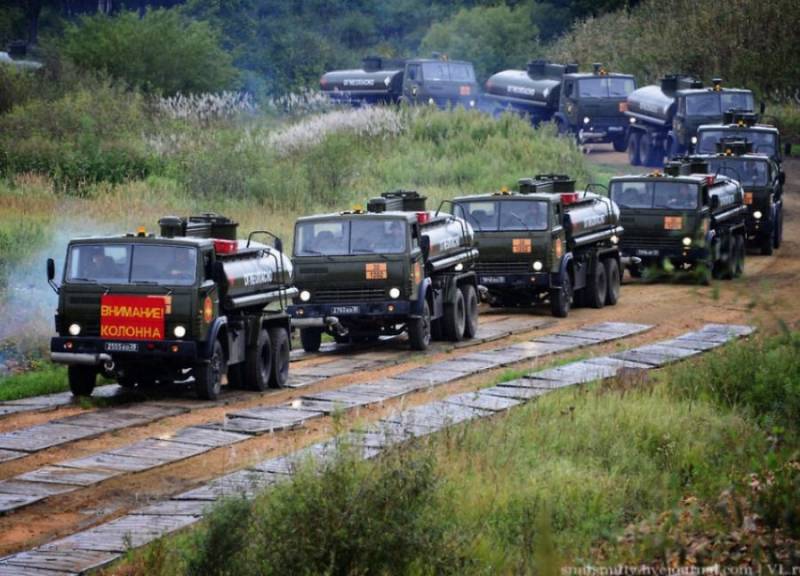 Currently, more than 200 of various grades of lubricants are used in the Armed Forces of the Russian Federation. Each year, the troops consumed about two million tons of fuel and lubricants. In our country, a special 25 State Scientific Research Institute of Himmotology works quite effectively in the interests of the RF Armed Forces. Today it is the only research organization in the country that is able to conduct a full range of tests for fuels and lubricants, propellant components, and equipment for petroleum products. Similar institutions exist only in the USA, France and Germany.

Today, responding to new challenges, specifically for the Russian army, new fuels and oils are being developed that can be used in arctic conditions. At the end of 2014, in the Arctic, they were tested at an ambient temperature of -65 degrees, in the future they will be used by the Russian group. Diesel fuel developed in our country does not cause problems with engine start-up and in 60-degree frost. There are also novelties in the field of rocket fuel, some components of which, using aluminum nanoparticles, increase its energy intensity and density by almost 20 percent, which allows increasing the payload mass of rockets.

Currently, 25-th State Scientific Research Institute of Himmotology continues to engage in work in the field of creation of alternative petroleum feedstock. New samples of aviation synthetic fuel from natural gas and synthetic oil are being tested. Studies are being conducted to obtain new types of motor fuel from coal. In addition, fuel is being developed for promising hypersonic aircraft. In the future, these devices will be able to develop in flight the speed of more than 5 Mach. Work is also underway on new brands of propellant components and fuels and lubricants, including rocket fuel with increased energy intensity for new generations of long-range cruise missiles for the needs of the Navy and Air Force. 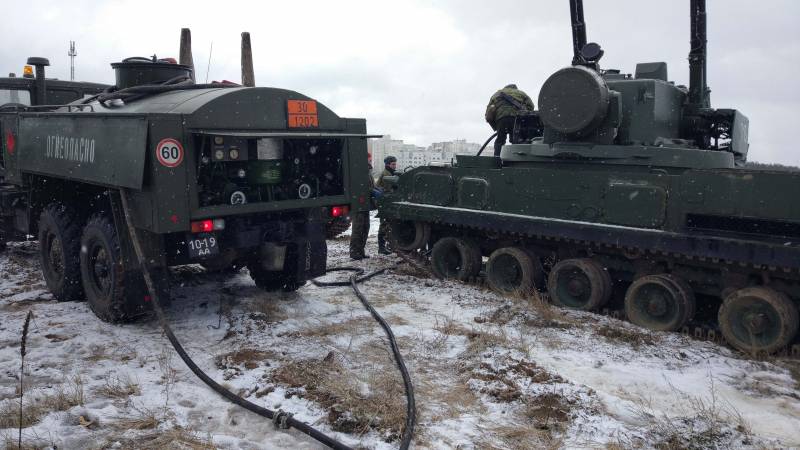 February 17 team "Military Review" congratulates all the servicemen and veterans of the Fuel Service of the Armed Forces of the Russian Federation on their professional holiday!