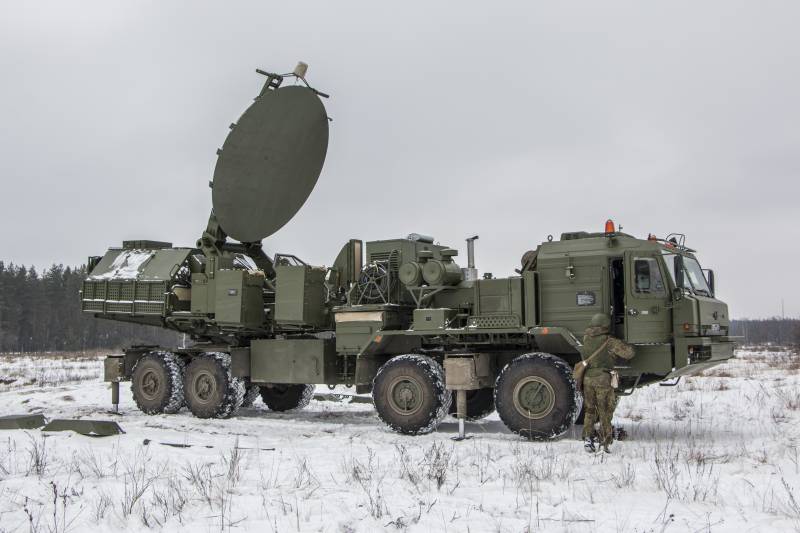 Thanks to the work of the ZVO press service, we once again visited our almost “home” EW brigade, which, by the way, February 23 will celebrate its 55 anniversary from the date of its foundation.

Since our last visit, the team managed to become the best in the district following the results of 2017, and get some absolutely new equipment.

The words "some amount" are relevant here for two reasons. First, in order not to disclose, and secondly, there is also an economic component.

Neighbors, an air defense brigade, last year completely renewed its fleet. We wrote about it, and as soon as retraining ends, I think we will look at how it went.

So, the complete re-equipment of the air defense brigade was cheaper in rubles than the replacement of several pieces of equipment from the Rab workers. Yes, EW is not cheap история.

But back to our current object of admiration. 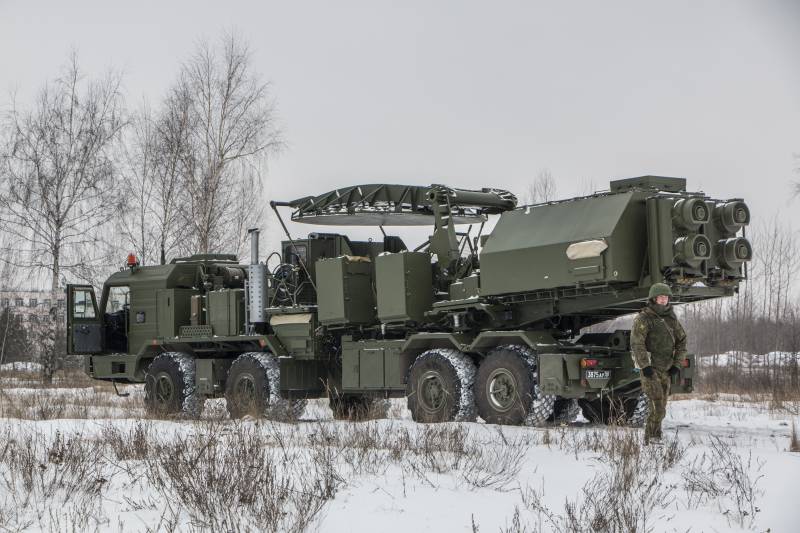 So, the station of electronic suppression "Krasukha-2O". 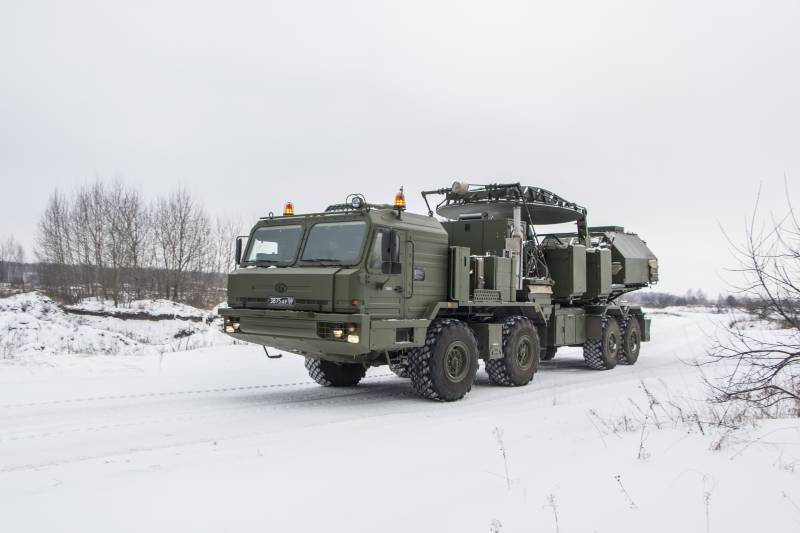 The station analyzes the type of signal and provides the effect on the enemy’s radar with interfering radiation, making it impossible for the enemy to detect targets and direct high-precision weapons at them. 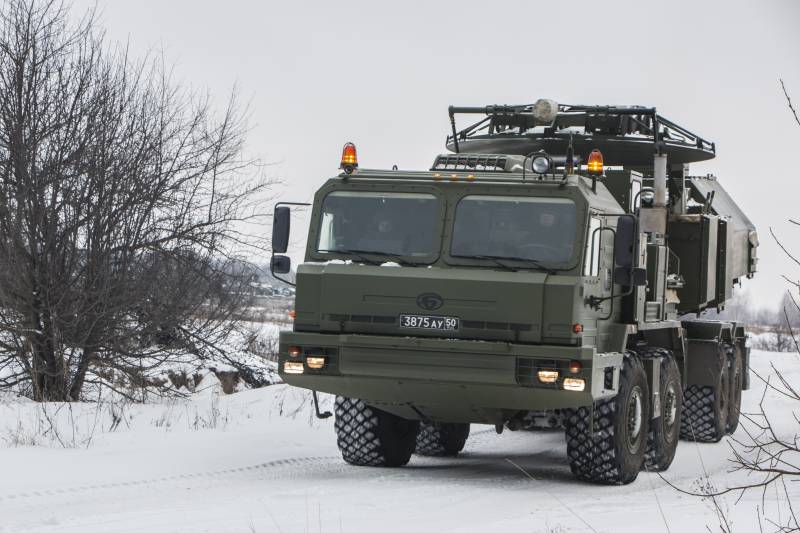 What can you say about the combat performance ... And almost nothing. In the combat position of the station is calculated for 15 minutes. Mechanical work is very small, mostly - the removal of various stoppers and installation of the machine on the supports. 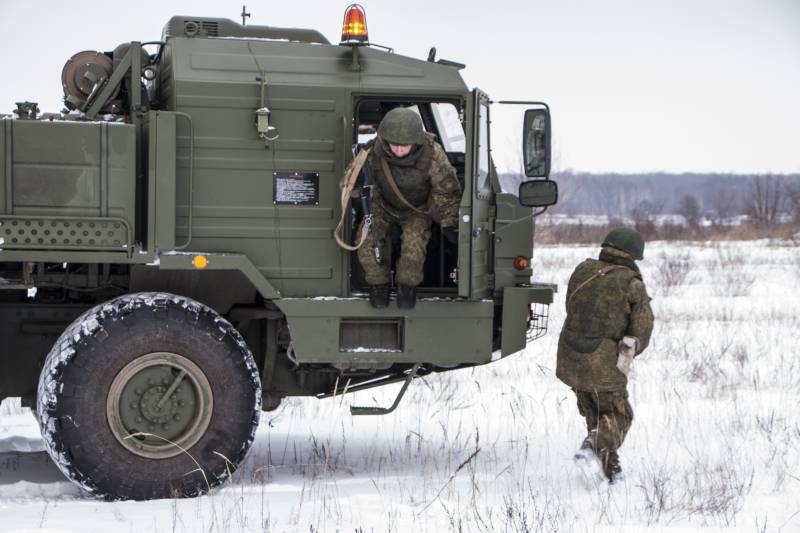 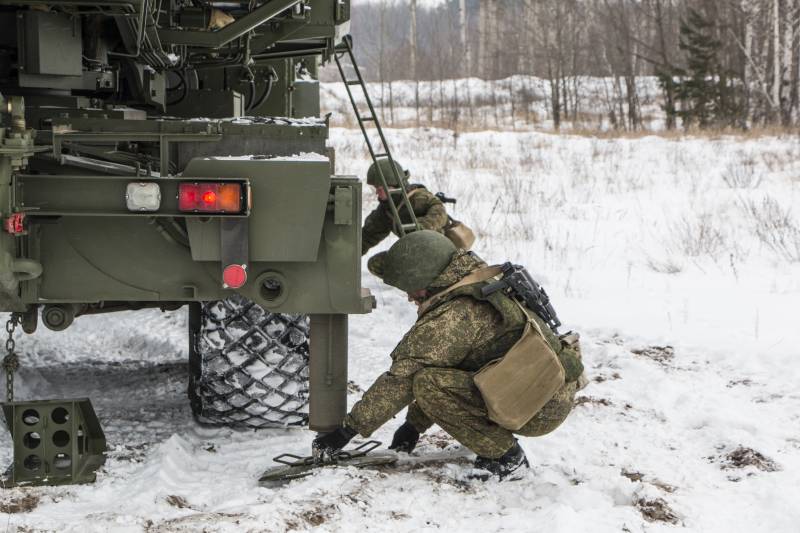 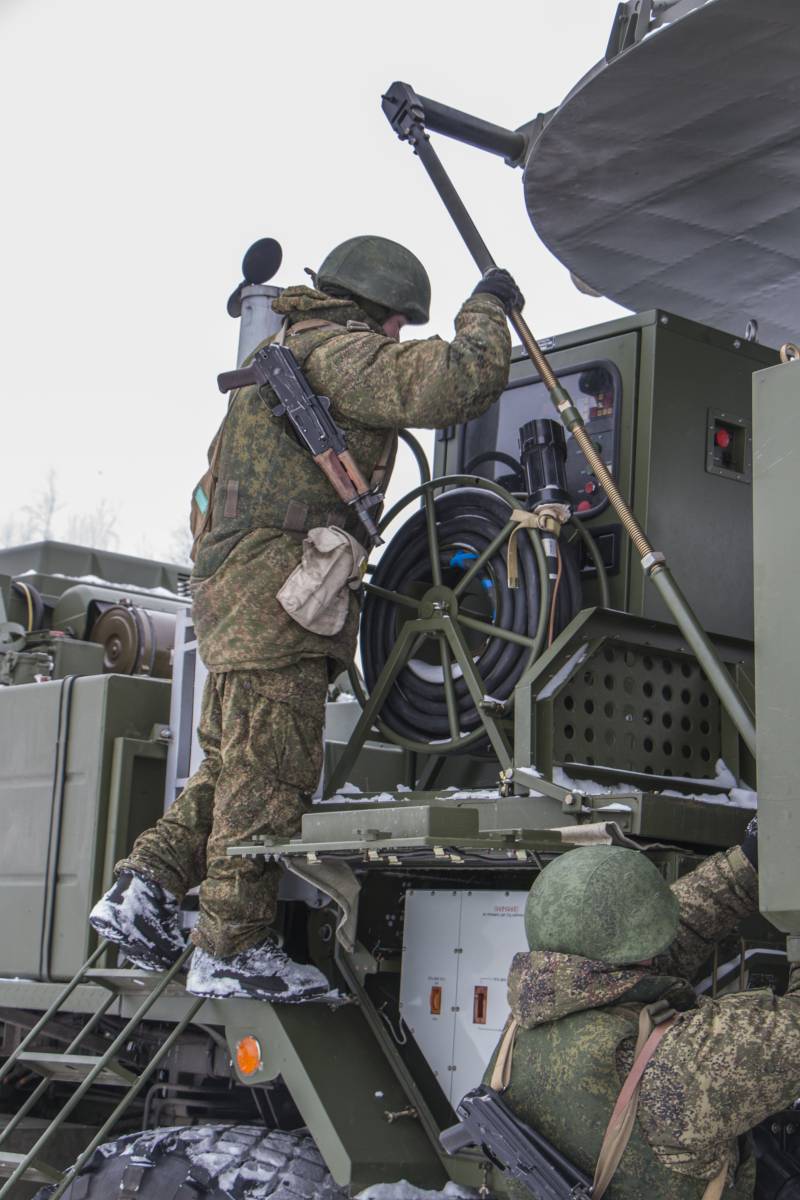 Yes, of course, a lot of cable connections. 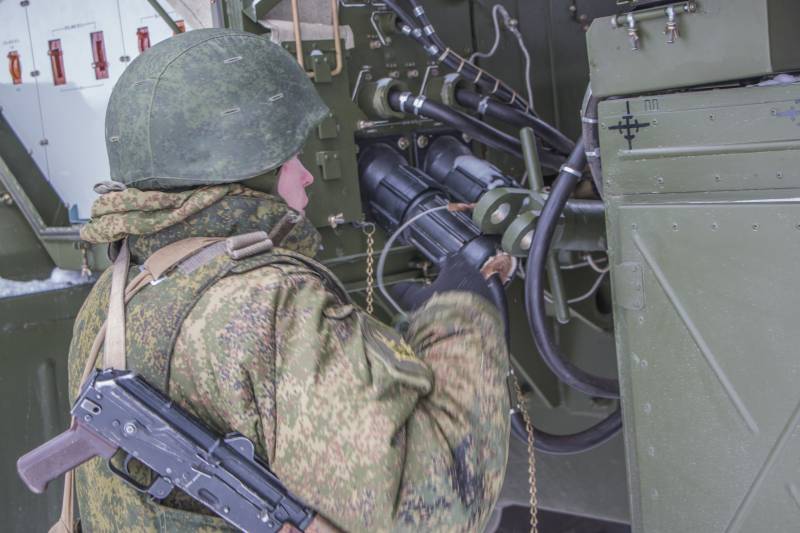 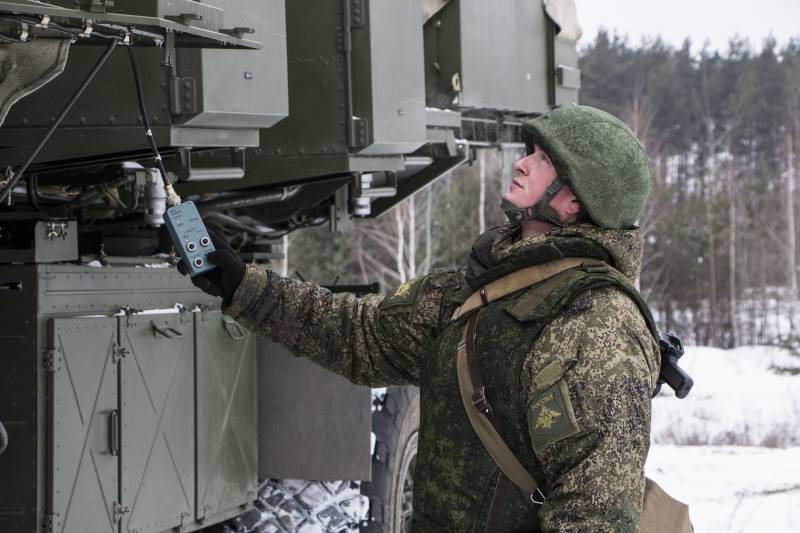 The complex is in a combat position.

Let no one be confused by such an angle of inclination of the reflector, everything is in order here. So it should be. "Krasuha-2о" works on objects located at a considerable distance, therefore, "shooting at the zenith" to her nothing.

In principle, the range of application would allow to work out completely on satellites in low orbits, but ... Different operating frequency range. So "AVAKS", if that - catch.

"Krasuha-2O" is able to confidently work at distances up to 400 km. 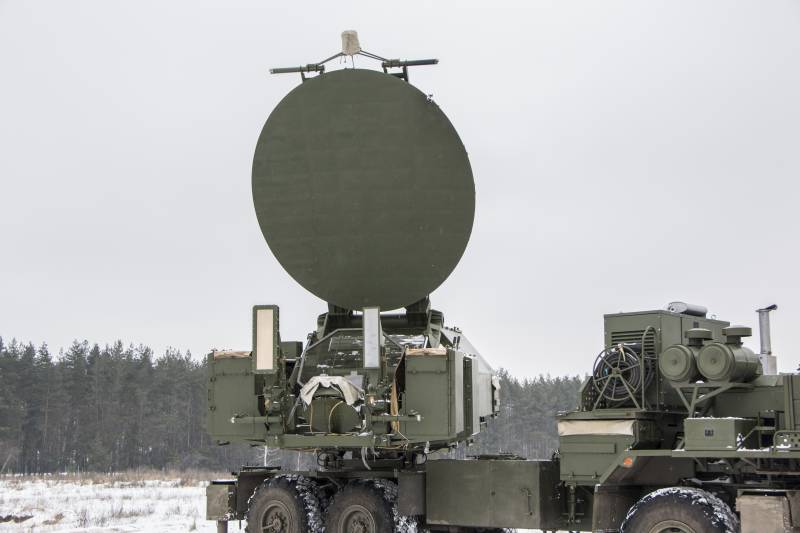 Having swept on the march, you are surprised at how smoothly the vehicle goes. And I must say, quite briskly. In general, in Bryansk well done, come up with such a dinosaur, weighing as a decent tank and the agility of the truck - it is something. 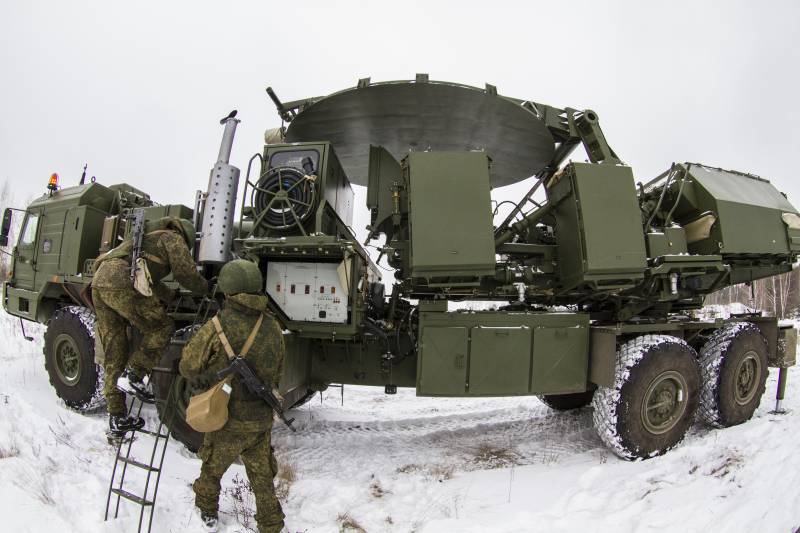 Naturally, while the calculation was unfolding the complex, I climbed into the cabin. And then there was something to be surprised.

Yes, the previous wrestler with AWACS was located in three trucks. Modernity in the form of digital circuits (the letter "o" in the title is not in vain, all the differences with the basic model in this regard) allowed us to save space and stuff everything into one machine. Let and such sizes.

But inside everything is as in tank. I also noted that the fighters in the calculation ... small. 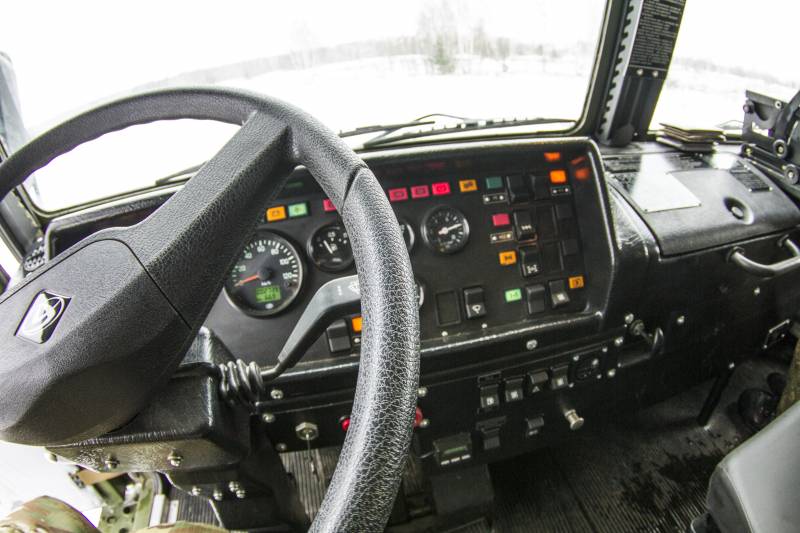 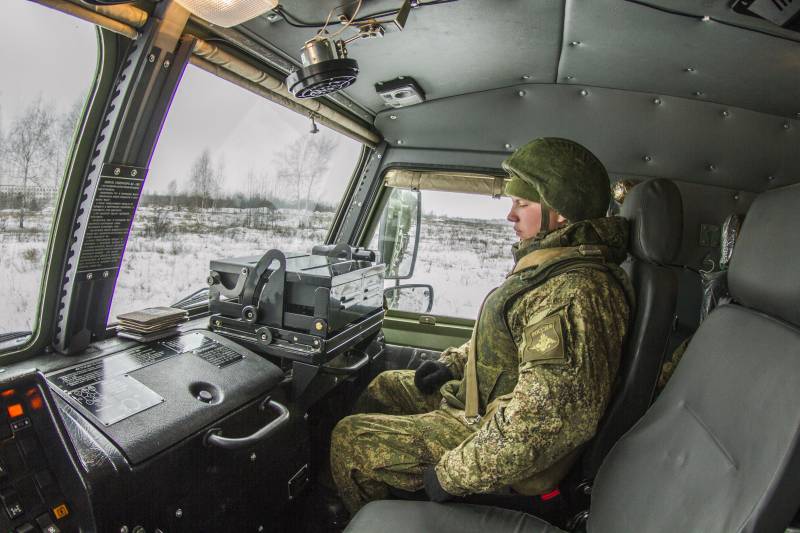 View from the driver's seat on the cab. More precisely, on its part. On the commander's place with a backup folding console. Well, there is a place ... 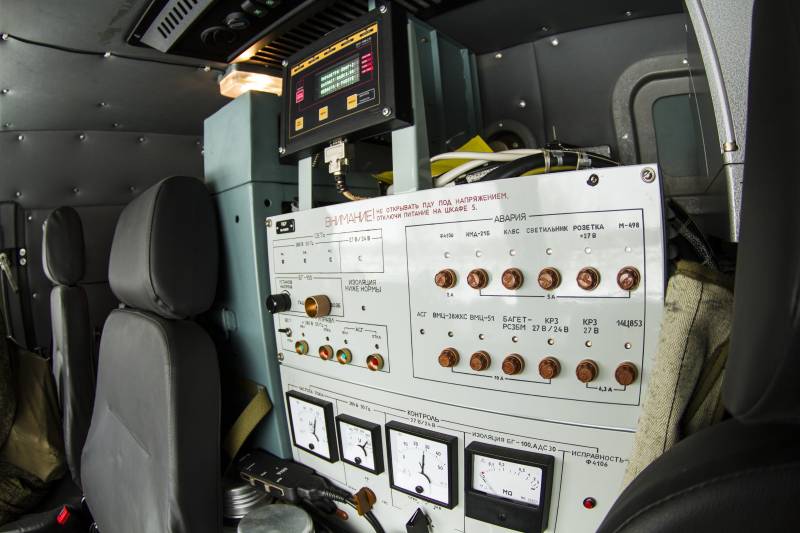 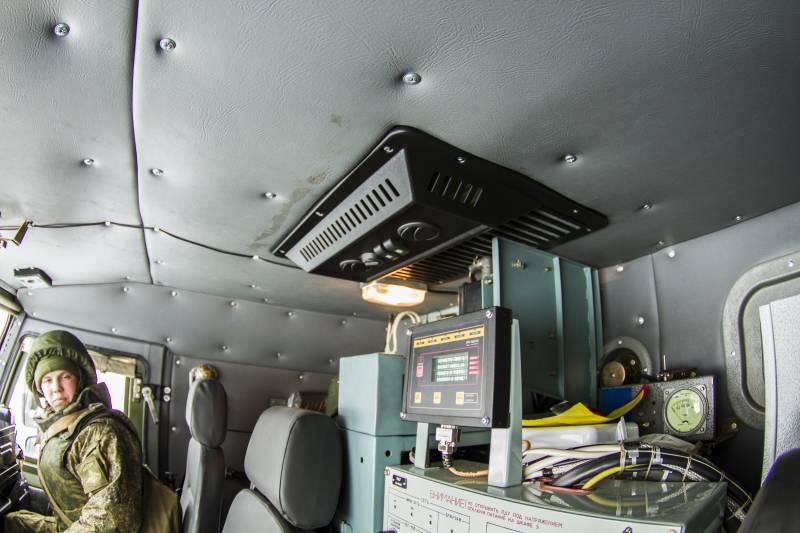 There is air conditioning and a very good avtonomka on diesel. 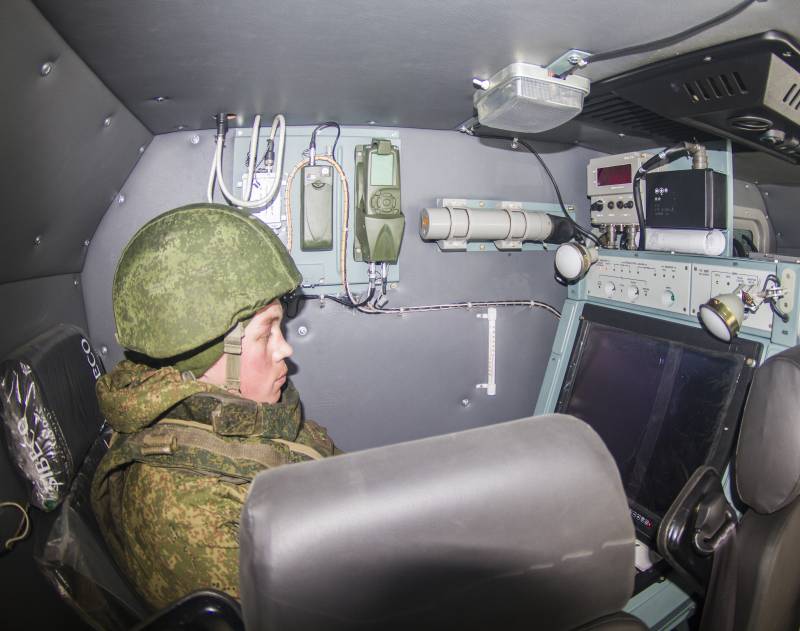 Operator's workplace. Behind the commander of the calculation, sideways to him. I did not climb there. Completely 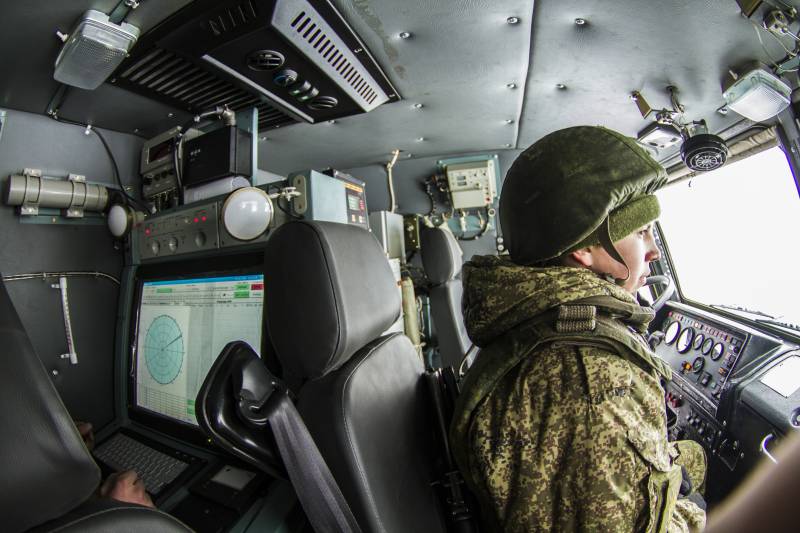 It is not easy to shoot even with a special lens, there is a war for every centimeter. In fact, the calculation works like this: on the left, the operator, on the right - the commander. Information on the screens and control are duplicated.

While I was tossing and turning in the cabin, trying to study and shoot it, the guests arrived. 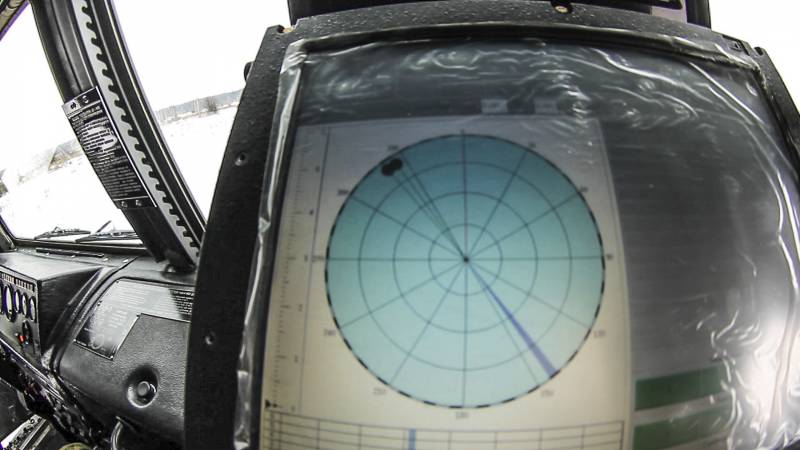 The blue sector on the screen is the position of the radiator unit and the antenna. Two green (actually green) circle - these are two flying targets that are included in the zone of action of the complex. If you capture them, they would turn red.

But the goals, apparently, also spotted us, because they got out of the circle very quickly. Well, at least I managed to take it off.

In comparison with its predecessors, "Krasukha-2о" is a miracle of miniaturization. If the 40-ton monster can be called that. But in return - mobility. Still, one car instead of three - this is serious.

Ctrl Enter
Noticed oshЫbku Highlight text and press. Ctrl + Enter
We are
Lies and truth about the deaths of soldiers in BogucharEW complex "Krasukha-4"
Military Reviewin Yandex News
Military Reviewin Google News
62 comments
Information
Dear reader, to leave comments on the publication, you must sign in.