Why the US is pressing Russia

February 19 2018
39
The eggs of the modern geopolitics of the United States are carried by the hen of the American military-industrial business, on whose prosperity the current administration of the White House has made a major bet 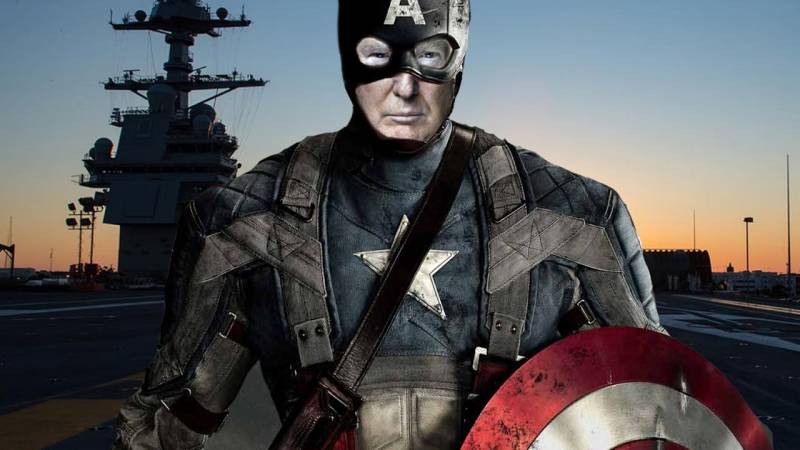 Not a week goes by without reports of unprecedented US pressure on those of their foreign partners who decided to buy weapon from Russia. Literally, the “Fe!” Just about it was voiced by the American State Department. His representative, Heather Nauert, very transparently hinted at Washington’s dissatisfaction with the Russian-Turkish deal to supply Turkey with the S-400 air defense system. Nauert said that Ankara, according to the agreements, should acquire "weapons that are operatively compatible" with NATO systems. The State Department stressed that C-400 are not.

A similar case took place in Indonesia last week. This country decided to purchase modern SU-35 fighters from Russia. And then came a shout from Washington. According to the publication of the BMPD, which is well-versed in military-industrial matters, during the visit of US Secretary of Defense James Mattis to the country, the Indonesian side was informed that in case of acquiring Russian weapons and military equipment, Indonesia could again face an embargo on the supply of American weapons, as it was in 1997 year. At the same time, Indonesia was offered to supply American F-16 fighter jets.

And here is another one - from the same “opera”. The United States is trying to persuade Vietnam to abandon the purchase of Russian weapons and switch to American-made weapons. It is reported by Defense News, citing an unnamed State Department representative.
We offer them to diversify arms suppliers and start purchasing American weapons, the official said. According to him, this will allow Vietnam to strengthen its military potential and strengthen its partnership with the United States.

Vietnam is, by the way, particularly significant. For the utmost insistence on the United States is precisely in relation to those countries that are Russia's basic partners in the arms market. For example - India. Washington literally climbs out of its skin, which is to the maximum “monetize” the geopolitical situation in South Asia, which is favorable for it. Which is characterized by growing antagonism between India and China. The sharply frequent lately American-Indian political and military contacts have been reduced to one common denominator. The US is aggressively offering itself to India as a new major arms supplier to this country instead of Russia. And they do it not without success. What favors the anti-Chinese policy of Washington itself, in which New Delhi sees some guarantees of the strength and durability of its geopolitical bond with the United States.

Of course, if you wish, you can see in this entire American hyperactivity purely anti-Russian motivation. Moreover, the United States itself designates the Russian Federation in its official military doctrine as one of the main threats.

However, in my opinion, it would be wrong to reduce everything only to this. Moreover, I am ready to admit that the anti-Russian motivation itself is for the United States a purely official value and certainly not an end in itself for them. As, however, and all the current anti-Russian hysteria.

In this regard, it is worth recalling how it all began. And it began with the fact that the new American President Donald Trump, barely having time to move into the White House, immediately proclaimed the main goal of his presidency to return the United States to world leadership on the basis of restoring the productive potential of the American economy. In other words, it was about abandoning once and for all the previous drift downstream, during which the real sector of the economy was washed out of the United States and migrated to the Far East, and to create conditions for its return to "historical homeland. "

And this is the most important task of the Trump administration, despite the fierce opposition from powerful enough globalist forces, for which America itself is no more than a loose change, as far as can be judged, performed very vigorously. Especially in those sectors of the economy in which the influence of the state is decisive. And this, above all - the military-industrial complex.

There are more than enough examples of how exactly the American authorities revive him. And they do it by hook or by crook, completely ignoring any rules and conventions.

In the course goes everything. From the global reformatting of the geopolitical situation, by continuing the well-established for this purpose “managed chaos strategy” used throughout the world, except, of course, the United States, which in this scenario plays the role of an oasis of peace and tranquility that is attractive to world business. Until such a radical reformatting of relations with China, which the Americans are trying to create as many problems and infringements as possible, by activating a belt of instability around it, in order to prevent further outflow of economic assets towards the east.

And Trump has to admit all this quite well. For example, in every way supporting the infinite bouza in the Middle East, he has already provided the US military industry with new orders worth hundreds of billions of dollars only at the expense of the Arabian monarchies. And his militarist corps de ballet around North Korea (one of the points of irritation of the situation around China) led to a sharp boom of military preparations in the countries of the region. And, again, it helped America a lot to "podgresti" to the previously completely distant from it India.

The bogey of the “Russian military threat”, inflated to unbelievable scales, serves the same purpose. Under this case, Trump has already achieved a substantial increase in the military spending of his NATO allies. Which, here it is not necessary to go to the fortuneteller, will pour a golden rain, mainly in the pockets of the same American military-industrial complex.

And the process has already begun. Moreover, the Americans really are not shy about anyone and literally breaking out of their possible competitors even their closest allies. Typical in this sense is the story of the voluntarist "bend" of Poland, which decided to offend the American company Boeing by purchasing a large batch of transport and combat helicopters from France. But Washington made scary eyes right there. They terribly turned them in the face of the urgently called on the carpet of the Polish "secessionists". And they instantly changed their minds. And now the wretched French, with their official contract signed, Warsaw gave a turn from the goal, but the American Black Haw helicopters, from the Boeing, which was never given an offense, were already safely dissecting Poland.

What is Poland, if the States have even bent the French themselves, having imposed their antediluvian S-130s as refueling aircraft, despite the fact that the French have their own latest A-400 transporters! But suddenly it turned out that these A-400s had a tangled jet of the “wrong caliber”, or somehow it’s not blowing like that. In general - well, in no way can they fill the French in the air Aviation. And basta!

About the epic story of the massive sale, read by shameless vpars to all vassals solvent in a row, which have not yet been properly adopted even by the United States themselves of the unfinished F-35 “super-tweeter” even remind inconvenient. So it has become a byword. Soyuznichkov bend over this in general without any discussion. A quite Komsomol appeal was thrown into such a NATO - “Everyone who can, must throw off and help America!” Where two billionaires get into this business, where they will collect all twenty for poverty. With the world on a thread, as they say .... Although the same Israeli pilots are already literally howling from such an American "gift" and tearfully ask their command to give them a little more to fly on the old, but not so unpredictable F-15.

And now about what does Russia have to do with it? But with it. Against the background of all this geopolitical and military-industrial grace, Russia for Americans remains a eyesore. From which and only from which they can expect the most unpleasant surprises. And in the most sensitive area, on which they made the main bet - on vparivanii the whole world of their far from always perfect weapons and on this basis increase their own well-being.

The problem for the United States is that Russia is the only country in the world outside of their sphere of global control, which has preserved the potential of innovative solutions in the field of military-industrial technologies. And not just kept, but continues to increase it. And in some areas definitely goes ahead. As for the degree of scientific and technical breakthroughs of their "know-how", and for the key criterion for the world market criterion "cost-effectiveness".

Simply put, modern Russian Tanks, submarines, anti-aircraft missile systems better shoot and hit than the US. And at the same time, they cost significantly less. That is, in conditions of real competition in at least a relatively free market, these systems are doomed to mass demand. Separate outbreaks of which are observed today.

But this is for Americans all the same that a sickle for their precious "Faberge." Because it is not just competitive difficulties, but an attempt on the very basis of the foundations of the current course of "economic revival" of the United States. In Washington, they can somehow relate to Russia, but for sure they will not be able to forgive one for them. If, with its breakthrough military technology, it tries to lure potential American buyers to itself.

That is why the United States, being often unable to oppose anything truly equivalent to the most advanced Russian combat systems, is beginning to use any tricks to retain this “glade” and prevent Russia from entering the world’s global arms market. Any means are used - from direct pressure on not quite stable Russian partners, to promotion of various geopolitical combinations, be it in the Middle or Far East. For the sole purpose - by hook or by crook, to eliminate a dangerous Russian rival. By the way, and sanctions against the Russian defense industry pursue the same selfish goal - to weaken the export capabilities of the defense industry of the Russian Federation and, accordingly, to increase their own.

Nothing personal just business! It seems that it is this uncomplicated principle that underlies contemporary American geopolitics and the entire global strategy of the United States. And in this sense, one cannot say that the current president of this country, Donald Trump, is such a hopeless loser.

Ctrl Enter
Noticed oshЫbku Highlight text and press. Ctrl + Enter
We are
Situational analysis of the death of the MH17 flight (Malaysian Boeing 777), made on the basis of engineering analysis from 15.08.2014Syria: Americans scare themselves, and Asma Asad buys chairs
Military Reviewin Yandex News
Military Reviewin Google News
39 comments
Information
Dear reader, to leave comments on the publication, you must sign in.