February 17 2018
31
Russia was involved in a cyber attack using the NotPetya virus, reported in the United States. The attack was undertaken in June last year and touched not only America, but also Europe and Asia. The damage is expressed in billions of dollars. The British Foreign Office also believes that the cyber attack was organized by the Russian authorities. Finally, Australian intelligence said that the Kremlin supported the organization of cyber attacks. These accusations are surprising, because Russia has suffered from the actions of hackers. 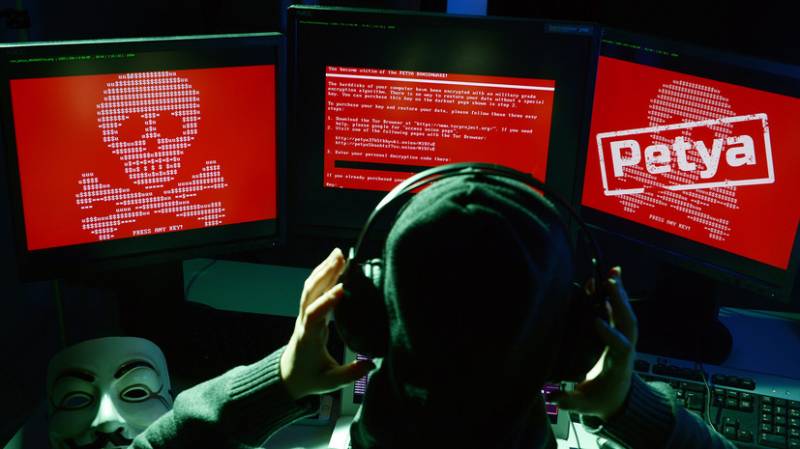 According to UK Deputy Foreign Minister Tariq Ahmad, who is responsible for cybersecurity issues, the Russian government and the Russian armed forces are responsible for the cyber attack carried out in June 2017 using the NotPetya virus. European firms suffered major damage from these attacks - in the hundreds of millions of pounds sterling.

Lord Ahmad has publicly attributed the NotPetya cyber attack to the Russian government. The decision to openly declare this underlines the fact that the UK and its allies will not tolerate "malicious cyber activity." This is stated on the British government website.

The attack was disguised as “a criminal enterprise”, but its main goal is penetration, they say in London. And the primary goals were the “Ukrainian financial, energy and public sectors”. The total penetration of the virus caused its further spread. the virus has affected other European countries and even Russia itself.

Lord Tariq Ahmad, on behalf of the British government, said that the Russian government, in particular, the Russian military, was responsible for the NotPetya destructive cyber attack, held in June 2017 of the year. The goal is a violation of the sovereignty of Ukraine. The "reckless launch" of this virus disrupted the activities of enterprises in Europe, which cost them "hundreds of millions of pounds."

The Kremlin "positions Russia" as a state "directly opposing the West." This "should not be," said Lord Ahmad. “We call on Russia to be a responsible member of the international community,” he says.

The Lord further promised that the United Kingdom would identify, pursue and respond to malicious cyber activity no matter where it comes from. Britain is committed to strengthening “coordinated international efforts to maintain free, open, peaceful and secure cyberspace.”

Following him, as noted by the Western press, was the Danish Minister of Defense Klaus Yort Frederiksen. He categorically stated that the traces of a virus attack lead "directly to Russia, to the Russian military." Earlier it was reported that the systems of the company AP Moller-Maersk (Denmark) suffered due to the attack.

Australia also accused Russia of a hacker attack. how noted the The Australian newspaper, with references to Australian intelligence, as well as to the results of government consultations with the US and UK authorities, the Australian government concluded that "the Russian authorities supported those responsible for the incident."

The main word was said, of course, by the USA.

According to Washington, Russia stands behind the extortion virus. The attack using the NotPetya virus in June 2017 was organized by Russian intelligence, White House spokeswoman Sarah Sanders reported. The introduction of an extortioner virus into computers subsequently led to "losses of billions of dollars in Europe, Asia and the Americas."

It is curious that such a “hot” statement sounded very timely: a few days earlier, the American intelligence community warned that Russia and its allies may well use their “cyber-tools” to intervene in the upcoming elections to the US Congress (to be held in November).

As we see, the accusation is not just serious, but also categorically. The attack was arranged by Moscow, and the point. And the entire English-speaking choir - the United States, Australia, and the United Kingdom - sings together one song: the Kremlin is to blame, the virus has set the Kremlin on free countries. Almost all of Europe sings along with America and Australia.

The NotPetya virus has become something of an object around which the scattered democratic states of the Old World should unite again. “Russians are coming!” This ridiculous slogan has now acquired a different, truly terrible sound: if before, neither the Europeans in the mass, nor the Americans believed that the Russians would start a nuclear war in Europe, now they are beginning to believe in another: the Russians will take it away them money. Here it is easier to believe in it, and the evidence from all sorts of “intelligence services” (even from the Australian one) arrived in time.

“It was also a reckless and indiscriminate cyber attack, which would entail international consequences,” the Kremlin warned the White House administration.

The Russians have already responded to foreign statements. In particular, commenting on the statement by the Deputy Foreign Minister of Great Britain, Lord Ahmad, the press secretary of the Russian president, Dmitry Peskov saidthat the Kremlin categorically rejects baseless accusations against Russia of involvement in cyber attacks.

Where did such a terrible virus come from, none of the Western intelligence services, and behind them the Australian one, speaks. As always, the West lost evidence somewhere “in the office”.

Meanwhile, the charges are the most serious: after all, this is not about trying to influence the elections in one of the European countries, but about a loss of many billions. The bourgeoisie can forgive a lot, but not the loss of money.

Attack NotPetya launched, we recall, 27 June last year. The first under it, as the press wrote, oil, telecommunications and financial companies in Ukraine. The ransomware virus broke through the protection of computers from sixty-four (!) States. Its “geography” extends from Belgium to Denmark with Germany, from India and Brazil to the USA. However, the trick is that in Russia a number of major companies suffered from the extortioner virus, including Rosneft, Bashneft, Home Credit Bank and, as expected, Gazprom (there are still no exact data ).

The “information” that the NotPetya virus was created in the GRU first appeared in January 2018. About this with reference to some sources in the CIA reported the largest newspaper Washington Post.

2017 was allegedly ascribed to the CIA by the “Russian military hackers” cyber attack. The attack NotPetya, the newspaper writes, destroyed data from computers of banks, energy companies, high-ranking government officials and the airport. According to the CIA's “secret reports,” the NotPetya virus was created by “military spies” from the GRU.

However, this information directly to the CIA declined to comment, the newspaper said.

According to the publication, such attacks "reflect the growing aggression of Russia in cyberspace." These attacks are "part of the broader doctrine of hybrid warfare."

The expert told reporters that the virus NotPetya is not really an extortionist, but only disguised as an extortionist. Its task is to constantly erase data from computers.

According to sources from the CIA, hackers worked for the Main Center for Special Technologies, a Russian division that actively participates in the "GRU cyber attack program." The newspaper does not give any names or proofs.

What could be the consequences of such serious accusations against the Kremlin?

Western experts and politicians are waiting for a real "firestorm" in international diplomacy. British Secretary of Defense Gavin Williamson saidthat Russia is “tearing to shreds a set of rules, undermining democracy, destroying everything that gives people work, and turning information into weapon».

This is the very Russia, we recall, whose economy in 2014 was “ripped apart” by Mr. Obama.

Well, in the US were made in the press, the former chairman of the intelligence committee of the House of Representatives, Mike Rogers, and the ex-deputy director of the NSA, Rick Leggett. They linked the viral attack with interference in the US 2016 election of the year.

“One of the most dangerous misconceptions associated with Russian intervention in American democracy is that it began and ended with the presidential election of the 2016 of the year,” said Rogers and Leggett. According to them, the US government should set up a task force to combat foreign influence, and the Trump administration should have the authority “to deter foreign forces” implicated “in hostile influence campaigns and cyber operations”.

And just, we note, the giant defense budget of the United States, part of which is devoted to the fight against Russia, will highlight money for cyber divisions. It is possible that the planet is on the threshold of a very special war: hacker. A war in which bombs will not fall, but computer systems will be destroyed.

Observed and commented on Oleg Chuvakin
- especially for topwar.ru
Ctrl Enter
Noticed oshЫbku Highlight text and press. Ctrl + Enter
We are
Situational analysis of the death of the MH17 flight (Malaysian Boeing 777), made on the basis of engineering analysis from 15.08.2014The virus for which there is no medicine
Military Reviewin Yandex News
Military Reviewin Google News
31 comment
Information
Dear reader, to leave comments on the publication, you must sign in.