February 22 2018
12
The First World War witnessed a unique phenomenon - when the battle trophies were bestowed on the property of the units of the Russian Imperial Army that had captured them. We reliably know about two such cases - we want to tell about them.

On this day, the battle took place at Kaushen - when dismounted squadrons of the Russian Guards cavalry engaged in combat with units of the German 2 land brigade supported by 3 squadrons and 12 guns. The forces of the Russian cavalry did not exceed the numerical strength of the 4's German battalions, while the enemy at Kaushen had the 6 battalions in a defensive position, supported by artillery.

The frontal advance of the dismounted cavalry was difficult - but support for the Guards Horse Artillery and an attack in the 3 squadron of the Horse Guards under the command of the captain Baron P. N. Wrangel allowed the battle to be reversed.

The squadron galloped at the enemy’s operating weapons - and despite the loss, captured 2 field guns, 4 charging boxes and a tower. And the last shot of the German cannon under the komeske killed a horse. The Captain was awarded the Order of St. George 4-th degree. 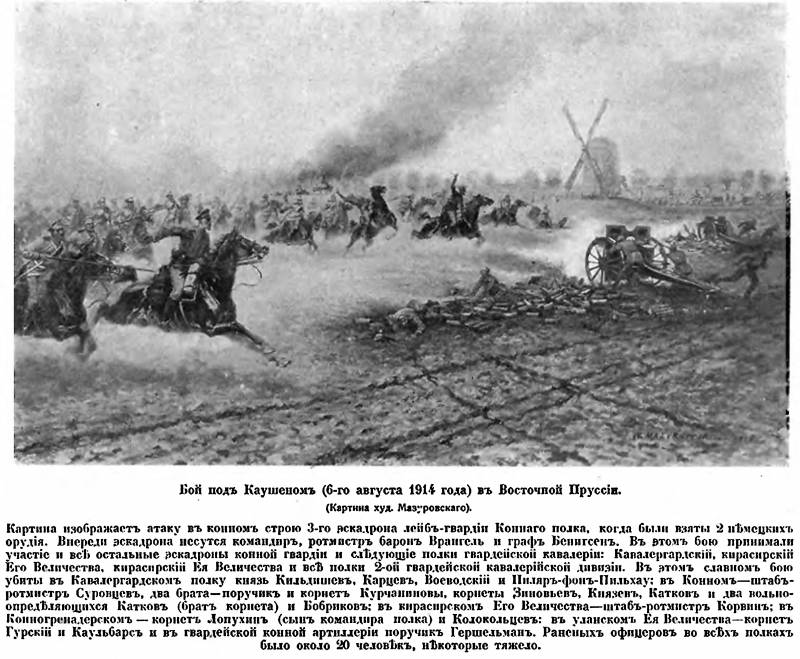 In this battle, soldiers and officers of the cavalry detachment showed an outstanding military impulse that cost only horsemen 13 officers (of which 6 were killed, and among the wounded were commander of the regiment Colonel Hartman - and he was wounded twice) and 38 of the lower ranks (of which 18 killed). The 2-th battalion of the 4-th landvehr regiment, who fought against parts of the 1-th Guards Cavalry Division, lost all officers (13 people) and 219 lower ranks. 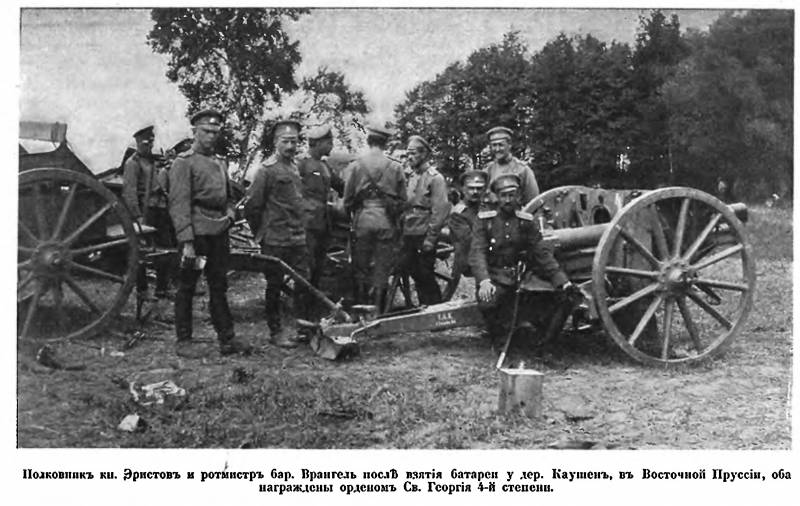 The success of horse guards became a turning point - the Germans began to retreat, and the Russians captured the ferry across the river. Inster.

And in memory of the glorious battle and commemoration of the feat of horsemen 2 of captured German 77-mm guns, 4 charging boxes and a tower. The highest command was granted to the property ("gift") of the Life Guards Horse Regiment. And they were transported to St. Petersburg - to the barracks of the regiment, "for storage." 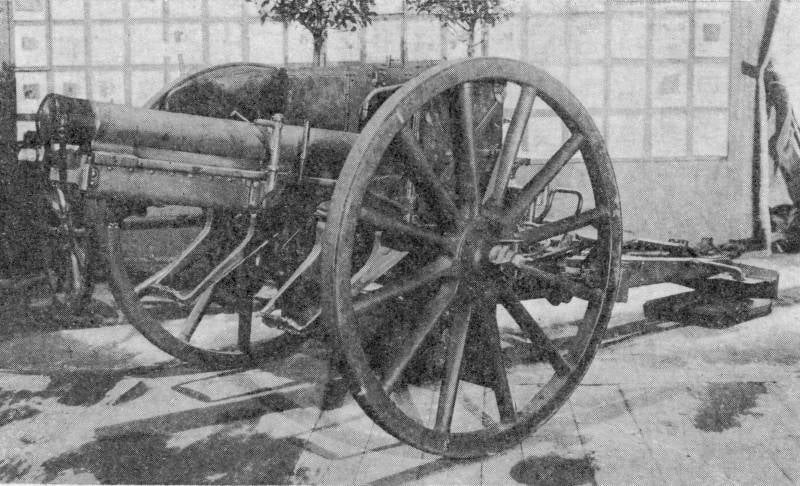 4. The 77-mm field gun, one of the 2-guns captured by horse guards in the Kaushen battle, is the property of the Horse Guards of the Horse Regiment.

Second case - episode stories The 2 Company of the Life Guard 3 Rifle Regiment of His Majesty.

For the battle of 27 in August, Neshawa, by order of the regiment, the company received the name “Combat” - and, as the company commander, captain Christopher Aue, noted, “we were all very proud”. For combat differences in the battles of Neshava H. Aue becomes the knight of Gergievsky weapons: for the fact that in this battle, under the destructive fire of the enemy, a company captured an Austrian trench, in which they later found about a hundred corpses of enemy soldiers. Roth H. Aue in this battle lost more than 50 people killed and wounded.

The “fighting” company remained in the course of the entire war - later acquiring the next trophy.

In one of his letters, the last Chief of the Guards Rifle Division Baron N. I. Stakelberg wrote that he somehow drew attention to the fact that the 2 company of the 3 regiment was the only one in the division to have its own machine guns - 2 of German machine guns on gigs. The regiment commander told the chief that during the night attack on Lomza in February 1915, the 2 Company X. Aue captured these machine guns — and the German non-commissioned officers were chained to the latter by nickel-plated chains. The machine guns were remade under the Russian patron, and H. Aue formed his own (company!) Machine-gun platoon - and by order of the regiment the machine guns were named as inviolable property of the Second Combat. And the covenant of H. Aue, when he handed over the company, said: under no circumstances do not part with these machine guns, taking them to apartments in peacetime - in Tsarskoye Selo. NI Shtakelberg noted that he had seen these 2 machine guns in Tsarskoe Selo in the premises of the 2 Company, and when the regiment was disbanded, they were handed over along with the regimental property to the Quartermaster.

After the battle of Lomzha, Captain Christopher Aue became a Knight of the Order of St. George of the 4 degree - for the fact that on the night of 20 February February 1915 in the battle of der. Karvovo for the height of 85,0 during a bayonet attack at the head of his company knocked out the Germans from the trenches, capturing prisoners and two acting machine guns. 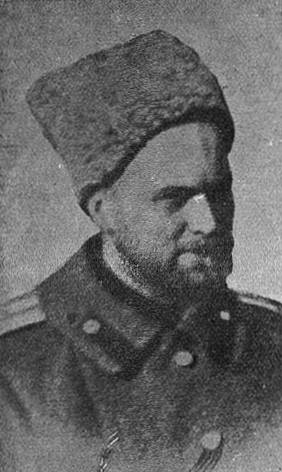 All in all, in the battle for high. 85,0 at der. Wysoké and Male Douzhe by the guards, who defeated parts of the German 41 infantry and 1 landwehr divisions, were captured by 5 machine guns. The attack of the Life Guard units of the 3 Infantry Regiment was noted in the Bids report and on the pages of the German Reich Archives.

The exploits of units and divisions of the Russian Imperial Army were encouraged in the following way: by awarding them the property of a valuable trophy gained in battle - as was the case in the history of the Life Guards Equestrian and Life Guards of the 3 Infantry Regiment. This was to be the visible embodiment of the feat, the pride of soldiers and officers, who had obtained the valuable trophy with their blood. And after the war - an important exhibit in the regimental museum. Perhaps it makes sense to revive this tradition in the modern Russian army. 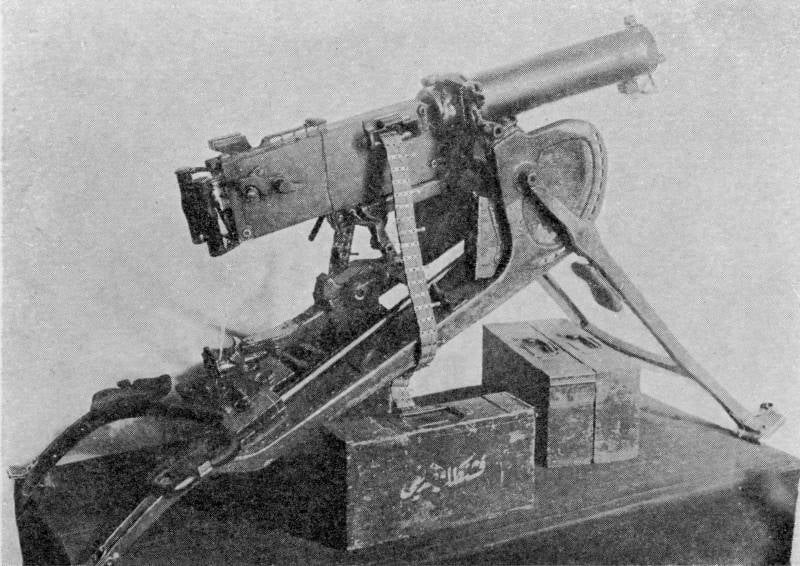 6. One of the first captured German machine guns.

Ctrl Enter
Noticed oshЫbku Highlight text and press. Ctrl + Enter
We are
140 years of the heroic defense of ShipkaReports from the militia of New Russia for 1 September 2014 of the year
Military Reviewin Yandex News
Military Reviewin Google News
12 comments
Information
Dear reader, to leave comments on the publication, you must sign in.