"We will fix everyone who tries to loosen Russia!"

February 16 2018
231
February 15, in Moscow, in the Cathedral of Christ the Savior passed the first Great Circle of the Russian Cossacks, whose stated goal was to reunite the Cossacks of Russia. 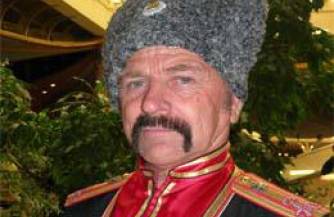 Greetings to the participants and guests of the Big Circle were sent by Russian President Vladimir Putin. Ataman of the Taman branch of the Kuban Cossack army, deputy of the Legislative Assembly of the Krasnodar Territory, Hero of the Kuban, Colonel Ivan Bezugly tells about the goals of the Big Circle and the tasks of today's Cossacks.

- At the moment, the situation is such that some Cossack troops are successfully and dynamically developing, moving forward. At the same time, some other military communities have stalled in their development and are in stagnation. But if you don't move forward, sooner or later you will roll back. We, in the Kuban, have repeatedly discussed the emerging situation, and have come to the conclusion that it is necessary to create a single Russian Cossack army under the leadership of the Supreme Ataman, to approve uniform laws, uniform rules and uniform standards. Of course, while maintaining the existing troops and their historical traditions. To discuss this initiative, a council of atamans of the Cossack troops was convened in Krasnodar. And the idea was supported. The need to coordinate efforts at the all-Russian level, including for those military communities that need it, is obvious. The creation of such a unifying structure will undoubtedly give a new impetus to the development of the revived Cossacks. And the work started by the past Big Circle will continue.

- As you know, the creation of the State Register of Cossack societies caused considerable criticism of the Cossacks - “social activists” who were not included in it, who believed that this led to a split of the Cossacks. How relevant is this problem today, and is the past circle a step towards overcoming it?

- I can say that I have great respect for those who participate in the Cossack movement on a voluntary basis. We ourselves began, as social activists, without any state support. But if we talk about today, the number of Cossack public associations is often exaggerated. As for the Kuban army, here more than 90 percent of the Cossacks are included in the state register. I imagine the situation in other troops, and it is similar. But regardless of the number of societies that are not included in the state register, there are also Cossacks there, and our goal is to achieve unity with them. And the past Great Circle, in which “social activists” also participated, is a serious step in this direction. Although I want to note that there is also the phenomenon of "atamans" who do not represent anyone except themselves, and use their assigned status to realize their personal interests and ambitions. Establishing unity with such "chieftains" will not be easy, and uninteresting.

- The current time is increasingly referred to as prewar. There are conflicts in the near and far abroad, affecting the interests and security of our country. How do these processes affect the life of modern Cossacks?

- All these formidable events not only alarm us, but also inspire us. Growing threats unite and unite us. So, some Cossacks who had previously retired, for a number of reasons, are now returning to Cossack societies, because clouds are gathering over Russia. We know well from history that whenever our country was in a threatening situation, the Cossacks rose up to defend it. And today, many Cossacks of the Taman department have already taken part in protecting the civilian population of Donbass from Bandera gangs, have fought and are fighting terrorists in the Middle East.

Let me remind you that in the Taman Division of the Kuban Cossack Army, the first territorial unit of self-defense in Russia was created - the 1-I Taman Cossack Division, in which the Cossacks of the department hone their military skills, preparing for the defense of the Motherland. Field exercises, command and staff exercises, divisional training are held regularly. First, a regiment was created in the Taman branch, then a brigade, and finally a division, which we hope will soon be deployed to the corps. When Nikolai Aleksandrovich Daluda became the military ataman of the Kuban army, he without fail spread our experience to all the Kuban departments, where territorial regiments were created, capable today of solving any tasks assigned. And now there are field camps. These developments helped us a lot in 2014, in ensuring the security of the Crimean Peninsula during the referendum.

We are ready to share our accumulated experience with other Cossack troops and societies, and I hope that the unification work begun in the Great Circle will help this. I have no doubt that the Cossacks of Russia, as one, will stand up in defense of our country, if necessary, but it is necessary that they all be trained, professional fighters. And in the fighting spirit of the Cossacks, I have no doubt - we saw 70-year old Cossacks fighting in the fighting positions of Donbass, who fought on a par with the youth. The commander in chief can rely on us and rely on the Cossacks. We will never surrender Russia to no one.

- It is no secret that in addition to external threats there are dangerous trends in the internal political life of the country. There are forces that seek to use the presidential election to destabilize the situation. At the same time, they seek to draw the Cossacks into political games ...

- It is not necessary to check the strength of the Cossacks. We, like our grandfathers, firmly stand for the One and Indivisible Russia, and we will not allow anyone to shake the situation. And if someone tries to do this, then we will fix it. For this we have both opportunities and desires. We need a strong Russia with a strong leader at the head.