February 16 2018
256
Today we will try to close the topic of PMCs in general, Wagner in particular, and the losses of this company in Syria. 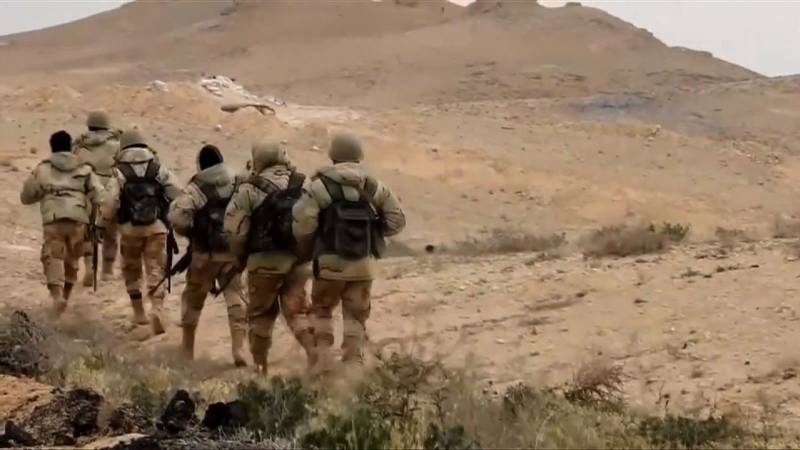 In general, it must be stated that the hysteria continues. Sensitive materials about the perished Russians are published on various resources. Relatives and friends with tears in their eyes are asking the president and the government: "For what?" What killed their son, husband, brother ...

The reaction is appropriate. “Amer killed our, and we are silent here! We must take revenge! We must answer! ”Not a single topic in conversations with readers. Unfortunately.

Everything is at the level of "one employee of PMCs, who cannot be shown, told the correspondent" ...

Not passed this cup and us. We also talked with two former employees. Of those who met even in the Donbas. Why ex? The contract has ended, and now it is quite respectable beginner businessmen. Earned enough to start your own business. The article about “Donbass is waiting for spring” remember?

It's simple. And why would former soldiers, former militiamen who remained out of work in the corps, not to earn extra money in this way? And earned, which is typical.

This, of course, is not about our friends from Donbass. It's about the situation as a whole.

In general, the information tsunami passed, doing things. But, nevertheless, soon, very soon, most will forget about the "torn vests" in disputes with opponents. Life goes on...

Because the topic of the death of a huge number of Russians must be closed. There were answers to simple questions. Who and why all this was necessary?

Why did the information creep out not even from our potential, but from the territory of Russia? Why were the dead and wounded "hundreds taken to Russia in a very short time," but nobody knows about that? And no one has seen them yet?

So what is this information flow running for? And why is the outgoing point a rather contradictory figure of Mr. Girkin? Today the answer is clear.

And he, oddly enough, is not in Syria. And in Moscow.

In the Duma stuck the law on the PMC. Deputies are not ready to accept it. And the employees of these very companies, which are, but which are not, really want to receive the same social guarantees as the military.

Employees really want to slip out from under the sword of Damocles law on mercenaries.

Yes, and the moral side is the place to be. I would like the work of the PMC employees to have any positive assessment.

On the one hand, the normal desire to stand on a par with those heroes who really served the state, and not an individual. And the memory of past life plays a role. The majority of PMC workers are from former security officials or military personnel, this is not a secret.

And here Girkin as a detonator is good for several articles at once. Babahnuli? And how...

Now let's talk about the points.

The main charges, which simply pierce most of the publications, are the charges of lack of protection. The column was defeated, but the Russians did not strike a finger to save it. Moreover, some publications directly accuse Russia of deliberately failing to take action. The Americans received a response from the Russian military to the request to stay in the column of Russians.

How many times has it been said that PMC employees do not belong to the armed forces? Hundreds? Thousands? Moreover, the company itself has no national division. Our acquaintances "from the former" just are not Russians. Former Ukrainians, citizens of unrecognized republics.

And now the question is: if a Russian citizen dies in an American or European PMC, will we raise a howl? In the French Foreign Legion?

Some of the most soulful readers emphasize this. Russians were killed. We must, we must, we are simply beasts that we are silent. But then it turns out that the beasts are everything. In private security companies work citizens of almost all the republics of the former USSR and some European countries. Why is no one accusing them of "brutality"?

The next interesting point - they worked in the interests of Russia. Where does this information come from? Participation in battles on the side of the Syrian army - this is the interests of Russia? Russia's interests are protected by the Russian army. Even the MTR, which, with all the closeness of the structure itself, is the army. A special way to perform combat missions, but the army.

Especially sad are the references to the fact that "the commanding staff of the company apparently communicated with the command of the Russian troops in Syria." These messages are interpreted as direct evidence that PMCs work in the interests of Russia and under the leadership of Russian generals.

We do not exclude such contacts. Let's not forget that in the management of the company are not the last people from the former military men. People who have served a fairly long time in the ranks of the Armed Forces, people who have friends in the active army. Yes, and nationality matters.

But as an evidence base, frankly weak.

Remember the security system of Soviet defense enterprises? At the first perimeter of the VOKhR, and in the depths of the soldiers of the company of protection. Are they equivalent for the state?

Some fairly literate readers who have read the books of Western, more precisely, American writers on PMCs, tell us about the method of "PMCs instead of the army" used in the West for a long time. Indeed, in some cases, when it is impossible to shine our own Armed Forces, they buy (they buy) soldiers of fortune. Wild geese. And they carry out the operation for money.

What is the point of Russia to spend huge money on employees of private security contractors? Pleasure is extremely expensive. 200-240 thousand in rubles - this is only the salary of a mercenary. Depending on the position. Yes, plus up to 100% surcharge for operations. Total But there is also a headquarters, company management, owners. How much will a mercenary company cost? Oh, from ...

Isn't it easier to use MTR and military police? Especially since we are officially in Syria. And any feat of the Russian soldier or officer only raises our prestige.

Now it is time for serious spitting in the face of all these guardians for PMCs. At the beginning of the article we talked about the goals of representatives and lobbyists of private companies. Adopt a law on private security committees and amend the law on punishment for mercenaries. Let's see the Criminal Code.

1. Recruitment, training, financing or other material support of a mercenary, as well as its use in armed conflict or hostilities -

is punished by imprisonment for the term from four up to eight years with restriction of freedom for up to two years or without it.

2. The same acts committed by a person using his official position or in relation to a minor -

3. Participation of a mercenary in an armed conflict or hostilities -

shall be punished by imprisonment for a term of three to seven years with restriction of freedom for a term of up to one year, or without it.

Here it is. Today, this article is suitable for all PMCs. Therefore, hiding under the signs of private security companies (PSC). Therefore, they are forced to keep a "vow of silence." We will adopt the law and get no longer mercenaries, but employees of the company who "perform special tasks in special conditions."

By the way, this same article hangs over many societies of veterans of the civil war in the Donbas. And over some political parties, successfully preparing their troops, it’s not quite clear who. But we will analyze this topic separately.

And if we return to the topic of our conversation, we get the following:

People who have launched this "exposing material" are counting on a period of timelessness.

When the old president is finalizing, and the new one is still in the project. When the State Duma deputies are busy with PR of their own candidates and will not particularly delve into the proposed bills. And the people, smearing snot in the face because of the dead, will happily clap their hands on the adoption of a law that will protect such guys.

And the last. We often criticize the Defense Ministry for the awkward work of covering the events in Syria.

But in this case, it is necessary to recognize that our defense department behaved correctly, without having descended into a quarrel with superpatriots and guardians of the Russian land. Statements were made on business and very professional.

Ctrl Enter
Noticed oshЫbku Highlight text and press. Ctrl + Enter
We are
How do data on Russians get to the terrorists in Syria?PMC Wagner and St. Petersburg Fountain
Military Reviewin Yandex News
Military Reviewin Google News
256 comments
Information
Dear reader, to leave comments on the publication, you must sign in.