News of the project Mi-26Т2В

February 16 2018
21
Currently Russian aviation the industry continues the serial construction of Mi-26 family helicopters, which are the largest and hoisting machines of their class. In parallel, the development of the existing project continues, leading to the emergence of new opportunities. Now a number of enterprises are working on new modifications of the helicopter with the designation Mi-26T2V. In the near future, a new type of prototype will be launched for testing, and batch production should begin shortly after.


The first reports of the modernization project with the letters “T2B” appeared in October last year. Then the press service of the holding company "Helicopters of Russia" told about the new order received from the domestic Ministry of Defense. It should be noted that the topic of modernization of existing machines and the construction of improved equipment was raised earlier, but only in the middle of autumn were the main goals and objectives of the project being developed announced.

At the heart of the concept of a new project, reportedly, is the experience of operating aircraft in the course of recent armed conflicts. First of all, the peculiarities of the ongoing operation of Russian aerospace forces in Syria were taken into account. An analysis was made of the work of military transport aviation, which showed the need for certain improvements to the existing helicopters. 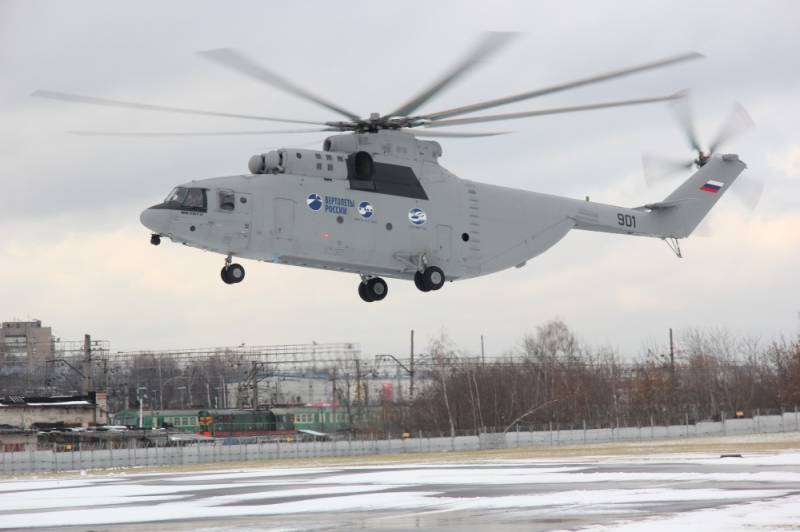 According to official data, the Mi-26Т2В modernization project provides for the upgrade of a number of onboard systems and devices. First of all, the onboard complex of radio-electronic equipment will undergo refinement. According to the results of the removal of some outdated units and installation of the new helicopter will receive some special features. It is expected that the pilots will be able to fly in difficult non-oriented areas at any time of the day. In addition, it was planned to ensure the possibility of work when the enemy applied means of electronic warfare.

New reports on the Mi-26Т2В project, revealing a significant part of current plans, were published by RIA News just the other day - February 14. With reference to the official representative of "Helicopters of Russia", the news agency wrote that so far the Moscow helicopter plant to them. M.L. Mile completed the design of the new machine. On the basis of the developed design documentation, the construction of the first prototype helicopter is currently underway.

The prototype of the T2B modification carries the working designation OP-1. The construction of the machine is carried out at the Rostvertol plant (Rostov-on-Don). The prototype assembly is supposed to be completed in the second half of the current year. After completion of construction, the Mi-26Т2В OP-1 will be sent to Moscow to the plant. Mile, where they will pass all the necessary flight tests.

After completing the required checks, the new transport helicopter will go into mass production. The construction of the first production machine, the Mi-26Т2В, is scheduled for the next 2019 year. In this case, it is only a year. Quarter or month of launching construction has not yet been clarified. This is probably due to a certain complexity of the work and a possible shift in the timing of their completion.

Last fall, Russian Helicopters emphasized the purpose of the new project. It was indicated that the Mi-26Т2В helicopter is being developed on the order of the Russian Ministry of Defense and intended only for it. New modification is not export. Thus, serial machines of the latest modification at the moment will be used only by one domestic customer.

According to published data, the essence of the project under the designation "Т2В" is to replace a number of elements of onboard equipment. At the same time the airframe, power plant, screws, etc. will remain the same. The basic flight performance will not change. Installing new equipment will improve the efficiency of technology in real conditions, expand the range of tasks and, to some extent, simplify its work.

One of the main differences of the Mi-26Т2В helicopter from the techniques of the previous modifications is the modified integrated complex of onboard electronic equipment NPK-90-2. The new version of the existing and used system will provide piloting in the daylight and at night. Flight along the established route, access to a given point and landing approach can be carried out automatically.

In case of flying over an area that does not have suitable landmarks, it is proposed to equip the helicopter with a number of new navigation devices. In particular, in the recent past, the use of an improved inertial navigation system based on laser gyroscopes was mentioned. In combination with an improved autopilot, the new navigation equipment will greatly simplify the operation of equipment in difficult conditions.

Local conflicts of recent decades have clearly shown the vulnerability of helicopters to enemy air defense assets. In addition, they demonstrated the need to create and use so-called. airborne defense complexes - means of timely detection of attacks and countering used anti-aircraft weapons. The authors of the project Mi-26Т2В took into account similar factors and provided means of protection against possible shelling from the ground.

According to RIA Novosti, the required defense complex will be present on board the helicopter of a promising modification. The representative of the holding "Helicopters of Russia", quoted by the news agency, said that using such a complex helicopter can not be afraid of guided missiles with radar or infrared homing heads. However, the type of complex proposed for use was not specified.

At present, the Russian industry produces aviation airborne defense complexes of several types. In particular, the Vitebsk system is installed on helicopters of several types of different purposes. For machines of the Mi-26 family, its modification under the designation L-370E26L is intended. Depending on the configuration, the Vitebsk complex is able to counteract anti-aircraft or aircraft missiles with a thermal or radar homing head. Upon detection of radiation or a rocket launch, the complex’s equipment performs jamming that suppresses the radar homing system, or fires off false thermal targets intended to disrupt the operation of infrared systems.

The proposed upgrade affects only the onboard equipment and therefore is not associated with significant processing of the airframe, power plant, screws, etc. Thus, the upgraded Mi-26Т2В will still have an eight-blade main rotor with a diameter of 32 m with a swept area of ​​more than 800 sq.m. The length of the vehicle along the fuselage will remain at the level of the 34 m. With a maximum take-off weight of up to 56, the helicopter will be able to lift into the air 20 and cargo, both inside the cabin and on the external sling.

The serial construction of the new Mi-26Т2В will start next year and, obviously, will continue over the next few years. As follows from the available data, the duration of construction and the amount of equipment collected will be directly related to the order of the military department and, possibly, security agencies. At the same time, the exact number of helicopters required has not yet been announced. Until the publication of the volume of the future contract for mass production will have to rely only on estimates and projections.

Recall that at present in the aerospace forces of Russia there are just over four dozen basic Mi-26 helicopters. Still 10 of such cars belongs to armies of national guard. There is also information about the operation of this technique by the border troops of the Federal Security Service, but its quantity is unknown. It is unlikely that the new plans will provide for the complete replacement of all existing Mi-26 previous modifications, but there is reason to believe that the new T2B will become quite numerous and will eventually occupy a significant place in the relevant parts.

It is curious that at the moment official sources speak only about the serial construction of the Mi-26Т2В helicopters. Obviously, in the series they will have to change the technique of previous models. At the same time, the possibility of repairing and upgrading cash helicopters with bringing their condition in line with the new project has not been mentioned. This may indicate that the main customer does not intend to completely re-equip his fleet of equipment. However, it cannot be excluded that the process of repair and modernization will be launched later.

In addition to the army and power structures, the Mi-26 is operated by a number of Russian civil organizations. Such equipment is available from the Ministry of Emergency Situations and from several commercial airlines. Will they buy the updated Mi-26Т2В - it’s too early to say. The special capabilities of such helicopters associated with the installation of advanced navigation systems and the presence of an airborne defense complex may be unnecessary for operation in civilian areas.

Russian Helicopters claimed that the Mi-26Т2В project was intended for the Ministry of Defense and is not an export one. The equipment of the Mi-26 family in various quantities is operated by a dozen foreign countries, and they could show interest in the new modification. However, to the best of our knowledge, the updated T2B will be supplied only to a domestic customer. At least, in the framework of the first serial batches.

In recent decades, Russian military transport aviation has repeatedly had to work in areas of local conflicts. According to the experience of such work, the requirements for an updated version of a heavy helicopter for aerospace forces were formed. According to the latest data, not so long ago, the Moscow Helicopter Plant. M.L. Mile completed the development of the Mi-26Т2В project, which made it possible to launch the construction of the first prototype machine.

The Rostvertol plant is already building a prototype with a working designation OP-1, and in a few months will hand it over to Moscow specialists for testing. The following year, after the completion of inspections, the start of serial construction of new equipment for the Russian military department is planned, which, apparently, will continue for a certain time.

The very first version of the heavy transport helicopter Mi-26 appeared a few decades ago, but the development of the original design continues to this day. By replacing those or other units, the machine improves its characteristics and gets new features. The next project of updating the Mi-26Т2В will allow helicopters to fly in difficult conditions, as well as with less risks for themselves, passengers and cargo.

Ctrl Enter
Noticed oshЫbku Highlight text and press. Ctrl + Enter
We are
The development of military versions of the Mi-38 helicopter has begunAn-12 in Afghanistan
Military Reviewin Yandex News
Military Reviewin Google News
21 comment
Information
Dear reader, to leave comments on the publication, you must sign in.