Dollars, turned into a weapon. American money against Russia

February 19 2018
42
US military officials and congressmen are discussing the future military budget of the state. This budget may be the largest in all stories USA. In fact, multi-billion dollar spending is directed against Russia. It was Russia that became the number one scarecrow for carriers of advanced liberal thought. 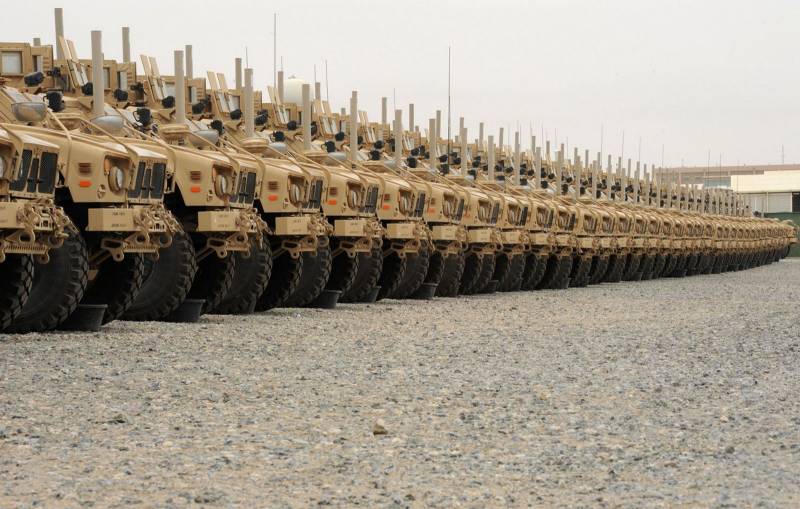 At the 2019 fiscal year, the Pentagon demands (or, as the American press puts it, it asks) the US defense budget of US $ 716 from the US Congress

Such a budget, if approved and accepted, will break records in the history of US military budgets.

Recall that the fiscal year in the United States begins on October 1, and therefore there is still plenty of time for debate and discussion. Of course, there will be changes. The military budget is usually not accepted. We must, by the way, remember that Mr. McCain and his associates hawks believe that President Trump is doing a good thing, arming his homeland, but he spends on weapons unacceptably little!

Surprisingly, the main "enemy" of America, that is, Russia, spends on its defense, if we count in dollars, in rounds 46 billions. Indicators are simply incommensurable. It should be remembered that Russia has an economic crisis, oil is not as expensive as in 2013, and Western sanctions are still in effect, including against the military-industrial complex of Russia. Therefore, defense spending in the Russian Federation is generally under a big question: if oil becomes cheaper, these expenses will inevitably fall. In the United States, with the new militaristic policy of Mr. Trump, copying Reagan's militarism, expenses will rise rather than fall. Did the Russians so intimidate the peaceful Americans with their military bases all over the planet?

Apparently, yes. Russians seem to the Pentagon to be a truly terrible enemy. In the Pentagon, and do not hide: the United States, military officials say, you need to keep the military "advantages" over Russia, but also over China. Naturally, the preservation of "benefits" free does not happen.

The budgetary request of the Ministry of Defense for 2019 year, released on Monday, caused an increase in salaries of 2,6 percent, a modest increase in the final benefits of services and major rehabilitation programs aimed at preserving the US influence on China and Russia.

In fact, if you look at the numbers, the build-up of the military budget does not seem significant. In comparison with the last fiscal year, it is planned to increase the defense budget by 2,6 percent, notes Military.com. However, this is more than what President Trump himself proposed for the new fiscal year: in December 2017, he approved an increase in the military budget by 2,4%.

The growth of the defense budget, the newspaper notes, is associated, among other things, with a significant increase in the money allowance for the US military. The US Department of Defense expects that a moderate increase in military salaries will continue in the short term and will even correspond to the growth of private sector personnel incomes. This is reported in the open budget documents of the Pentagon. In the 2019 fiscal year, for example, it is planned to increase the salary of sergeants by 1.169 dollars per year.

The alleged increase in the number of staff is also reported. The US Air Force will numerically “grow” by 4.000. The total number of Air Force personnel will be 329.100 people. 4.000 active personnel will also receive ground forces in order to increase their forces to 487.500 people. In the naval navy 7.500 people will be added, and the total number of sailors will be 335,4 people. Finally, the Marine Corps will receive 1.100 people, and in total the number of these forces will increase to 186.100 people.

The National Guard will increase its strength slightly, by 500 people.

If the Pentagon’s document is approved by both the White House and the US Congress, then a budget request of $ 716 billion for 2019 will provide funding for the construction of ten ships for the Navy, including three missile destroyers, two Virginia-class submarines and one vessel.

In total, the newspaper notes, for two financial years 1,4 trillion will be allocated in the form of military funding. dollars to create lethal weapons and increase the capacity of the armed forces. This was announced by Secretary of Defense J. Mattis during his trip to Europe to a meeting on security issues. According to Mattis, thanks to the budget decisions of Congress and the President, the United States will again have “primacy” among the armed forces of the world. The Minister of Defense also spoke about plans to increase the number of troops, the development of cyber operations and the purchase of more ammunition.

Of the estimated 716 billions of dollars, about 30 billions of dollars will go to the needs of the Department of Energy and other institutions that contribute to national defense. About $ 617 billion is planned to allocate in the form of the basic budget of the Pentagon. About 69 billion will go to the so-called military budget (or the Fund for Foreign Operations) in case of unforeseen circumstances. Basically, the money will go to Afghanistan, Iraq and Syria. 6,5 billion dollars will be used to support the European Defense Initiative (to strengthen NATO). Another 900 million dollars - on agreements on security cooperation concluded by the United States with a number of countries.

As President Trump said earlier, the US defense budget “provides resources to strengthen missile defense and build aircraft, tanks"warships and cyber-tools, with the help of which those brave men and women who defend us will restrain aggression and, if necessary, enter the battle and win." Trump emphasized increasing monetary allowances for “brave men and women,” saying that this is “the most important thing”.

Regarding the promotion of his budget, Trump, seeing how well the case is going, said this to his protege Mattis “Mad Dog”, but he did not hide his joy by publicly stating (almost in the manner of Hillary Clinton): “Wow, I don’t I can believe: we got everything we wanted! ”(Wow - I can't get it!)

Thus, we see that the Pentagon will have 6,5 a billion dollars to contain Russia - that is how much it will go to support the European Defense Initiative (otherwise - to strengthen NATO). Amount against the general budget is almost that tiny.

“6,5 billion dollars is, roughly speaking, one percent of the military budget. But we must understand that this amount is equivalent to the military budgets of the Baltic countries, Poland, Ukraine and other countries that the Americans consider to be their allies, in aggregate, ”the newspaper reminded "Sight" military expert Alexei Leonkov.

According to him, these billions are likely to go "to restore all the infrastructure around the borders of Russia, which was during the Cold War." This is a recreation of military bases, the installation of new observation posts, equipment. These are reconnaissance flights and so on.

However, in reality, 6,5 billion is far from everything that “specifically” is intended for Russia. After all, it is not by chance that Americans are thinking about resuming the practice of equipping cruise missiles with nuclear warheads (for example, the Tomahawks). Alexey Leonkov says the following about this: “To do this, you need money: The Pentagon plans to get 16 billion dollars. Additional funds will be spent on resuscitation of other programs with medium-range, sea-based cruise missiles, and, possibly, land-based (although they are prohibited by the INF Treaty). ” In fact, the Pentagon wants to return to the practice of the 1980-ies, when there was a concept of a strike on the USSR with the help of cruise nuclear missiles. And this is where the sum of more than 20 billion arises - just as much is expected to be spent on the modernization of missiles.

It is appropriate to say here about the US Navy: an increase in the number of fleets. The expert recalls the "Arly Burke" and submarines of the class "Virginia". “We need to understand, again, that these are primarily carriers of cruise missiles,” he says.

Finally, the Americans intend to place their strategic bombers closer to the Russian borders. “For their constant presence in the air (B-52, probably, will soon begin regular flights along our borders) we need tanker aircraft. Hence the corresponding requirement to purchase KC-46 tankers, ”Leonkov believes.

It turns out, we note that Trump, copying the strategy of his idol Reagan, puts the policy cart before the horse of the economy. While under Reagan, the United States did not have such huge public debts, and production was in no hurry to move to fraternal China, today defense spending will obviously be financed in the old-fashioned way - by raising the borrowing ceiling. Reagan just became the president at which the US national debt jumped sharply. Economists define 1980s as the period when the volume of US public debt grew much faster than GDP. Later, in the 2000s, the gap between GDP dynamics and public debt growth widened further. This was due to the wars that President Bush unleashed.

As a result, the new increase in military spending in the United States will lead to an increase in both public debt and budget deficit. With regard to inflation, the weakening of the dollar has recently glorified the US Treasury Secretary.

In short, the American hegemon is ready to go for anything, just to protect itself from the terrible Russian.

Observed and commented on Oleg Chuvakin
- especially for topwar.ru
Ctrl Enter
Noticed oshЫbku Highlight text and press. Ctrl + Enter
We are
About Stalin and KhrushchevWhat you didn't want to know about England
Military Reviewin Yandex News
Military Reviewin Google News
42 comments
Information
Dear reader, to leave comments on the publication, you must sign in.