The victims of the shooting at a Florida school (USA) were 17 people.

February 15 2018
48
Another shooting incident occurred in the United States. This time we are talking about the shooting of students of a school in the state of Florida.
US media reports that a former student broke into the Marjory Stoneman Douglas High School building of the city of Parkland (approximately 55 km north of Miami) and opened indiscriminate fire weapons. The victims of the bloody drama were at least 17 people. About 20 were injured, three people (16 girls and 17 years) are missing.


At Marjory Stoneman Douglas High School, Parkland trained around 2,8 thousand students between the ages of 14 and 18 years.

Until the end of the week, the school suspended its work due to the incident. 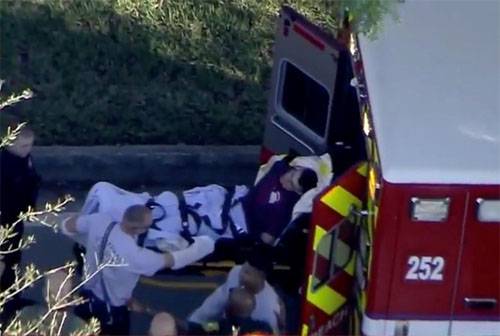 According to the latest data, the young man who was previously expelled from the school turned out to be a Parkland shooter. Local police call his name. This is a certain Nick Cruz 1999 year of birth.

The American press reports that the majority of the dead are those who studied at Marjory Stoneman Douglas. However, there are teachers and guards in the lists of the dead and injured. The local portal of Parkland writes that the guard Aaron Faith is in a hospital with a severe wound, who tried to resist the shooter who broke into the school.

The Parkland police report that the shooter used the AR-15 semi-automatic rifle.

Ctrl Enter
Noticed oshЫbku Highlight text and press. Ctrl + Enter
We are
School is under attack. What are the causes of the Perm tragedy?
Military Reviewin Yandex News
Military Reviewin Google News
48 comments
Information
Dear reader, to leave comments on the publication, you must sign in.