Expert opinion: the scale of the upcoming Sino-Russian naval exercises will be unprecedented ('People's Daily', China) 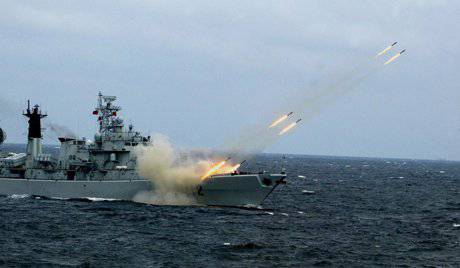 How will the upcoming joint Chinese-Russian naval exercises differ from the past? What is the political and diplomatic significance of these teachings? Ma Xiaolin, an expert on international issues, the head of blshe.com Chinese blog portal, shared his opinion on these issues.

Ma Xiaolin believes that the upcoming Chinese-Russian exercises will be different in that the code of maneuvers will change for the first time. For the first time, the PRC and the Russian Federation will hold exercises under the code “Sea Interaction-2012”, which will be the first joint maneuvers in the sea outside the SCO.

Secondly, the upcoming exercises will surpass the past in scale. According to the Director of the Office of Foreign Affairs under the Ministry of Defense of the PRC, Major General Qian Lihua, the theme of the exercise is “Joint defense and guaranteed military operations at sea”. The maneuvers will consist of four parts: preparation for military actions, practicing practical actions, a naval parade, exchange and study. On the Chinese side, 16 surface ships will be involved, including a destroyer, escort, missile boat, integrated supply ship, hospital ship, 2 submarines. On the Russian side, seven warships will take part. During the exercise, a joint command center will be created, from the Chinese side, Vice-Admiral Din Ipin, Deputy Commander of the Navy, will manage, from the Russian side, Rear-Admiral Leonid Sukhanov, Deputy Chief of the Main Staff of the Russian Navy.

From the point of view of the program of the upcoming exercises, in the 2005 year, the joint Peacekeeping Mission maneuvers were held under the counter-terrorism sign, the current exercises are mainly aimed at strengthening the abilities to combat piracy and terrorism in the Pacific, guarantee free travel, counter the challenges of external enemies.

During the exercises, the North Sea fleet of China will send a missile destroyer, which will be part of a joint group with Russian ships. For the first time, Chinese and Russian vessels will jointly cross the Tsushima Strait of Japan and enter the waters of the Yellow Sea of ​​China. In a sense, the exercises will be important actions in the Western Pacific, will cause regional concerns.

Responding to new challenges and threats

Speaking about the importance of joint Chinese-Russian naval exercises, Ma Xiaolin believes that the upcoming exercises resonate with the “relations of comprehensive strategic interaction and partnership” established between the PRC and the Russian Federation, and special bilateral ties have been reaffirmed and deepened in the military field. The sides, through joint exercises, will enhance the ability to counter new challenges and threats at sea, as well as coordination abilities, will advance the protection of peace and stability in the APR and on the planet.

At the same time, the upcoming exercises will mark a strategic cooperation against the background of constantly changing events in West Asia and North Africa, as well as in the context of the Syrian crisis. In particular, after China and Russia twice rejected the draft UN Security Council resolution on Syria, and also after the Russian Federation announced the intention of its long-term military presence in the area near Syria, these exercises will testify even more about the connection with past events in the world.

Ma Xiaolin noted that following the relocation of the US strategic center to the East, the strengthening of US strategic cooperation with the APR, the strengthening of military cooperation with the allies, Washington’s intervention in the South China Sea issues, creating a threat to the vital interests of China and Russia in the region, China and Russia should certainly give a clear signal to the Americans.

The style, spelling and punctuation of the original are preserved, please readers - do not signal errors in this article - approx. ed.