Is the ice broken? Do we need such a ministry of lack of culture, industrialists thought

February 15 2018
231
An interesting action happened the other day. True, the media for some reason bypassed such a thing, and yet the phenomenon is significant. 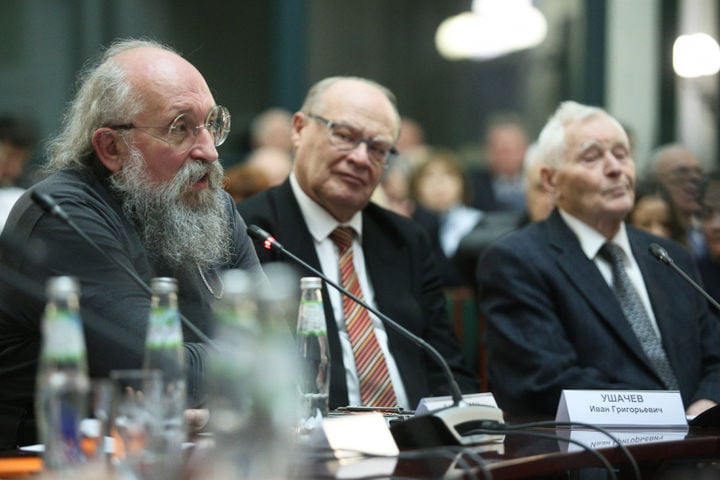 The Council of the Chamber of Commerce and Industry of the Russian Federation on industrial development and economic competitiveness discussed the impact of cultural policy on the development of the real sector.

The panelists discussed the situation in the segments of Russian cinematography, television, architecture.

Actually, what they were trying to discuss there was a bit incomprehensible to a normal person.

The situation is comatose.

We have a problem with culture in general, and with lack of culture in particular. But the fact that the industrialists started talking about this is already interesting.

Chairman of the Council Konstantin Babkin voiced a number of proposals that will form the basis of the section on the cultural policy of the state in a large report on the economic development strategy of the Russian Federation.

Somewhat incomprehensible to whom this report goes, everything, in general, is up to date.

In particular, Babkin voiced a lot of things. From a heap of loud, but empty phrases, it turned out to isolate one:

"... to form the state order for the development of high-quality films on industry and agriculture."

Normally, that's all in its place and fell. Gentlemen industrialists are concerned that in 20-30 there will be no one standing at the bench. And bread to grow.

Mr. Babkin said that, according to experts of the council, from 149 films supported by the Cinema Foundation, 75% are negative with respect to stories and the image of the future, and only 10% of them carry a positive charge.

And those categories that need to be talked about and that attention was paid to in the “good old” Soviet times, alas, have been forgotten.

Our film and television activists can spend money on stories about anyone (siloviki, gangsters, prostitutes, sexual minorities, bankers, and so on), but not about those who would be worth it. About teachers, scientists, doctors - not a word. They are behind the scenes.

“The cultural policy should make society stronger and increase the competitiveness of our country, our industry”- Babkin's words.

And we have a solid spit in the past.

Meanwhile, while we were ashamed of Stalin, Hitler's fans and fans loafed around. Shed tears on the innocently killed soldiers of the last Reich.

And why should they not appear if the so-called “ministry of culture”, led by the so-called minister, breeds poor filmmakers and performances about anyone, just not People with a capital letter?

The so-called ministry inherited from many speakers. Personally, I liked most (as always, by the way) the performance of Dmitry Puchkov, who is “Goblin”.

Comrade Puchkov was in his repertoire, and, if not expressed, as Sergey Shnurov, it was only because of internal culture. And in fact it was quite a.

There is nothing to add. Only that for some reason the state is extremely interested in this and constantly grants to those who work in this direction.

The so-called "ministry of culture" gives money for shooting the so-called "box-office films", which for some reason one after another become unprofitable.

And it is worth emphasizing that no one is responsible for this, and the money spent is not returned.

Although, as an option, perhaps from the other side of the ocean compensate.

As a result, everyone feeds them on the topic of how our ancestors won victories anywhere, not because, but in spite of.

Contrary to the damned totalitarian regime, which bent them, humiliated, trampled and killed. And in spite of them they won.

Again quote Puchkova:
“... People want to look at the exploits of their ancestors and accomplishments, they do not want anti-Sovietism, but they are fed continuously. And if the ideal is in the USA, then until the country has created its own ideological base, within the framework of which it will turn out that it is good to live here, that you have to work for the country, you need to love it, serve it and fight for it, nothing will come of it. It’s impossible to solve these things with money. "

“If people go to Transformers-5 and Star Wars-10, they cannot be distracted by production drama. We must learn to shoot them so that they run like Star Wars. But we don’t have such creators at the moment How to grow them in the framework of lack of ideality is unclear ...

The situation, in my opinion, is sad, and without an integrated approach it cannot be done at all, it cannot be solved with any money. "

To the words of an intelligent person will not add anything. Bundles are not Sands.

There were representatives of the "that" side. First Deputy Minister of Culture Vladimir Aristarkhov, Executive Director of the Cinema Fund Anton Malyshev and President of Moskino, Honored Artist of the Russian Federation Igor Ugolnikov.

Dear and honored Vladimir Bortko, who can, frankly, not only master the budgets, but also make films, he rightly said that our cinemas are American networks, and they are promoting American ideas accordingly.

It's hard to disagree.

To be honest, I would like to see such a person as Puchkov in that chair, where Medina is now getting high. And this would be a real reform, about which televisions, refrigerators and irons so often tell us.

It would even be a breakthrough of power on the way to the creation of at least some, the smallest and most overtly, but the state ideology.

Chance for future generations to become not a herd of consumers, but still citizens of a great country.

But this without pride in its history, for example, is unrealistic.

And if we, more precisely, they, abandoned the past - they have no future.

It would be worth remembering.

It is a pity, by the way, that the alarm that social activists and simply intelligent citizens have been beating for more than one year was supported by industrialists. But even so, you know. Small, but a victory. What else did anyone think.

The industrialists realized that, as I said, in no more than a year will nobody go to the machine or to the combine control panel. Everyone will strive for slightly different ideals.

Well, God forbid good luck to the guild masters on this thorny path.

By and large, for the sake of such it is worthwhile to arrange alliances with anyone. There is too much at stake, and the fact that representatives of the industry intervened is really a plus.

After all, at least, they can remind Medinsky and the company that the one who pays is the one who orders the music. Whoever fills the budget, he has the right to indicate who to sip.

Yes, of course, some of today's bohemian "creators" like Serebrennikov can get from the ticket office and refuse to receive, but who said that this is bad?

In the old Russia, Morozov, Tretyakov, Bashkirov, Lebedev, Bugrov built factories and factories, at the same time sponsoring theaters. Why not adopt such a principle?

I want to live in Great Russia, but not a branch of the United States ...

Ctrl Enter
Noticed oshЫbku Highlight text and press. Ctrl + Enter
We are
Reports from the militia of New Russia for 27-28 September 2014 of the yearDemonstration show "Interpoliteh" will be interesting novelties
Military Reviewin Yandex News
Military Reviewin Google News
231 comment
Information
Dear reader, to leave comments on the publication, you must sign in.