February 15 2018
21
Have you noticed that in recent years, with enviable periodicity, there have been reports in the media about the desire of European politicians and the military to create their own army? Purely European project without the participation of overseas defenders. 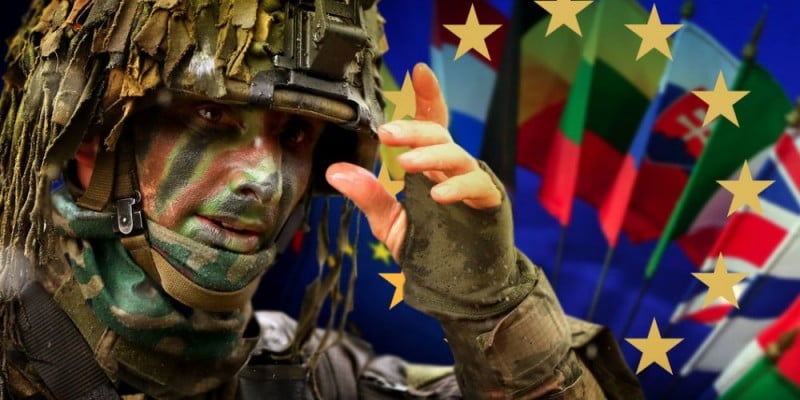 And this desire is expressed not by representatives from small countries, but by quite serious uncles and aunts from the leading countries of Europe — Germany, France, Italy, and the United Kingdom. Young and micro-Europeans, on the contrary, in every way invite the US military to their own territory.

So who and why is introducing into the minds of Europeans the idea of ​​the need for their own army? Why did the NATO bloc suit everyone for many decades, and suddenly there was talk of self-defense of European countries? Are European politicians independent in dealing with their own security issues?

The world is changing rapidly. This is said and written so much that I will not take time and place in this article once more. These changes directly concern everyone. But in varying degrees.

And who cares most about changing the situation in the world? The answer is obvious. The US is losing the leading position of the world gendarme. The concept of world domination, when Americans could do any abominations in any country in the world, collapsed. China, Russia, but the last spit in the American hegemony were the actions of the DPRK.

We have been assured for a long time and continue to assure that the main thing in the country's power is a strong economy. The ability to buy everything and everyone. And only in second place - the ability to strike the armed forces on the intractable. Smart heads from the TV set many arguments in favor of this particular position.

Oddly enough, most believe it. Believes even when история own family says the opposite. When grandfather or great-grandfather broke the backbone in 1945-m much richer Europe. Not just Germany, but all of Europe. They believe even when the “sub-authorized North Korea with a torn economy” put the largest economy in the world in its place.

Today, many talk about the contradictions that supposedly exist between the United States and Europe. It is doubtful that the Americans would enable the Europeans to "get off the hook." Too tidbit. Yes, and invested in Europe is enough.

NATO? And what will happen to the alliance immediately after the United States stops financing the bloc? The EU? And who controls the EU? European countries or overseas hosts? The beautifully created "democratic system of governance" works perfectly with the help of control over the countries of the little ones.

There is an interesting question. And the EU, why the US? It is theoretically more profitable, on the contrary, to give Europe the opportunity to become equal to the United States in terms of economic development. Then you can reduce your own investments. And free up the money to put on their own defense.

But then how to develop American science, design thought, medicine and other, quite ordinary, but necessary spheres of life? We are accustomed to the fact that our scientists are leaving the United States. There are more opportunities, salaries are incomparably higher, it is easier to reach the world level. But in Europe there are smart heads too. And they are also needed by the United States.

Simply put, let Europeans live beautifully. Better than the Russians or other "Asians". But let them live worse than Americans. And then the possibility of "buying" a scientist from any country will always remain. "Purchases" of any necessary specialist.

But back to the original question. Let's return to the European army. Why are Americans so indifferent to these conversations? The answer is on the surface. The pan-European army is a US project. The project, which is caused by necessity. A project that will fulfill the promises of several presidents, including the current one.

Remember the beginning of Trump's reign? His public statements about the need to fulfill financial obligations by European countries to pay for membership in NATO? Those same 2% of GDP. In plain text, the Americans demanded money. You have to pay for security!

So what? Can someone say today that those for whom such statements were intended fulfilled the requirements? Notice the legal requirements of Americans. Lithuania, with a powerful economy, does not count. I do not remember exactly how many countries execute the contract in and out. 3 or 4.

To say that the United States began to push Europeans recently is frivolous. The beginning of conversations coincides with the appearance of Russia in the geopolitical orbit. From the moment when the Americans suddenly realized that the ocean had turned from a defender into a huge problem. And even tactical nuclear weapons, located on offshore platforms, is now dangerous for the country.

And it was here that they started talking about a pan-European army. Army, which will be fully contain the Europeans. Americans will “cut coupons” by supplying arms and ammunition to Europe. And it is impossible for Europeans to get away from this. The very same "NATO standards" will work. "Podsazhennye" on the American arms Europeans simply can not do without US companies.

By the way, explanations of some of the actions of NATO towards its own members appear here. Remember the horror of Erdogan, when, after a downed Russian plane, he suddenly refused to protect his own country by an alliance. When NATO simply "sent" the second largest army of the bloc to independently resolve issues with the Russians.

Today, many analysts and journalists refer to the notorious 5 article of the NATO Charter. We are frightened by a general war in the event of an attack on one of the member countries. Then a simple question arises. Why did this very 5 item not work with Turkey? And the question arose not only among journalists. He came from the leadership of most European countries.

US actions are quite predictable. The United States does not intend to fight for Europe. The vector of foreign policy, largely forced, redirected to Asia. But I want to save influence in the EU. That's why the talk about 2% stopped. Today we are talking about tens of percent for European countries. American weapon and ammunition road.

I repeat, but the project of the united army of Europe belongs to the United States. It is beneficial to the Americans in many ways. Calm and well-fed life under the hood of the United States ends. The EU faces a choice. Independently, at their own expense, begin to build a unified army or negotiate with Russia. That after many years of ignoring it will be quite difficult to do.

But probably. We do not need war in Europe.

Ctrl Enter
Noticed oshЫbku Highlight text and press. Ctrl + Enter
We are
Results of the week. "Well, do not change me because of every idiot!"Memo to mercenaries in Africa
Military Reviewin Yandex News
Military Reviewin Google News
21 comment
Information
Dear reader, to leave comments on the publication, you must sign in.