February 15 2018
36
According to prominent foreign experts, relations between Iran and Russia are not going through a cloudless phase. On the contrary, the stability of relations between Moscow and Tehran remains unclear: uncertainty is characteristic of partnership. Relations are not getting stronger, but only “survive”, and this is due to the conflicting strategic vision of the parties in the Middle East. 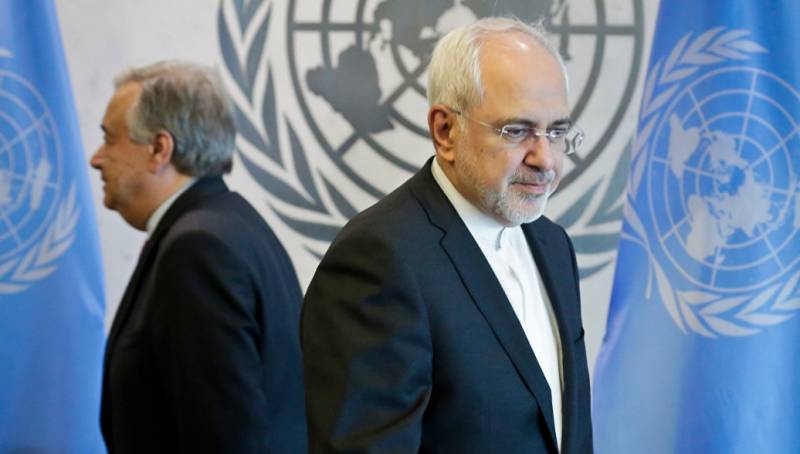 January 10 Iranian Foreign Minister Javad Zarif met in Moscow with his Russian counterpart Sergey Lavrov. The parties discussed a resolution on the civil war in Syria and talked about the intention of US President Donald Trump to suspend a “nuclear deal” with Iran, concluded under B.H. Obama. Mr. Zarif highly appreciated Russia's resolute support for the nuclear agreement reached at the time with Iran, and noted the readiness of both countries to preserve the territorial integrity of Syria.

Despite the fact that this meeting of Zarif with Lavrov was aimed just at demonstrating the strength of the Russian-Iranian alliance to the international community, the long-term sustainability of relations between Moscow and Tehran remains unclear, says Samuel Ramani, teacher at St. Anthony's College at Oxford University, he is a regular contributor to the major publications The Washington Post, The Diplomat and The National Interest, as well as the EastWest Institute's innovation policy blog.

The expert expressed his opinion on the far from unclouded relations of Iran with Russia in view of the contradictory interests of the parties in the Middle East "The Diplomat".

As the author believes, the uncertainty associated with the "survival" of the Russian-Iranian partnership should be explained by contradictions in the strategic vision of the parties to the regional system in the Middle East itself.

Russia's strategic vision, Ramani indicates, is mainly focused on eliminating sources of instability and preventing US military intervention. From the point of view of Moscow, Washington contributes to the creation of failed states (failed states). The Russian government justified its military Syrian intervention in September 2015 as a necessary measure to restore stability and keep Washington from using force to overthrow Bashar al-Assad. Russia views its Syrian campaign as an “integral step towards achieving its broader goal of becoming an indispensable guarantor of collective security in the Middle East,” the author believes.

As for Iranian politicians, they extol the role of Tehran as a "stabilizing force in the Middle East." For them, collective security is only the peripheral goal of a common strategic vision. Iran is primarily focused on expanding its sphere of influence in the Middle East and building capacity to counter Saudi Arabia in the Arab world. These expansionist goals, Ramani points out, are forcing Iran to actively cooperate "with the warring non-state actors" and to participate in such hostilities that "undermine the effectiveness of political settlement initiatives supported by Moscow."

And such significant differences in order to threaten to destroy Russian-Iranian cooperation in Syria.

The expert considers the conflict widely: not only in the military, but also in the diplomatic phase. Yes, the Russian military highly appreciated the effectiveness of Hezbollah’s troops during military operations, but Iran’s use of Syria’s territory to create permanent transit for Hezbollah’s weapons alarmed Russian politicians who “strive to maintain strong relations with Israel.”

Iran does not want to cease hostilities in Syria until Assad wins complete victory. Iran’s conviction of a military solution in Syria makes it a less desirable partner (compared to Russia) for diplomatic engagement with the Syrian opposition or Kurdish factions. That is why the scale of the Moscow-Tehran partnership, including negotiations, is limited.

Prospects for constructive cooperation between Russia and Iran to resolve other conflicts in Yemen and Afghanistan, too, do not look brilliant, the analyst believes.

In Yemen, the already tense relations between Russia and the rebels, based in Iran, deteriorated even more after the assassination of former President Ali Abdullah Saleh on December 5. This tension prompted Moscow to establish closer ties with Saudi Arabia and the United Arab Emirates (UAE) to resolve the crisis.

The divergence of goals, continues Ramani, limits the possibilities of cooperation between Russia and Iran and in Afghanistan. Russia is in a hurry with the Afghan political settlement, which includes the Taliban as a party (by the way, the organization is banned in Russia), writes Mr. Ramani. Iran also wants to achieve a peaceful settlement in Afghanistan in the long term by military means, that is, providing military assistance to the Taliban forces near its borders. Russian politicians are concerned that Tehran may interfere with the Afghan peace process.

There are divergent interests, which leads to a weakening of the partnership between Russia and Iran.

The strength of ties between Moscow and Tehran can also be greatly influenced by US policy. As the former US ambassador to Russia, Michael McFaul, rightly noted in August 2017, the re-introduction of a tough US sanctions regime against Iran, if the White House refuses a “nuclear deal,” could force Tehran to “resolutely tune” to Moscow.

Thus, one should hardly expect to strengthen Russia's relations with Iran in the near future, and especially in the long-term, when it comes to the restoration of Syria and the “order” in the Middle East. Russia will be especially difficult because Iran is a local ally of Syria, and Russia is far away.

In addition, despite the fact that the Russian military is closely cooperating with the Iranian armed forces, and Russian diplomats support Iran in the UN Security Council, Moscow is also confronted with the divergent regional interests of Iran and Israel, also linked to Syria. This is indicated, for example, by Gil Yaron, a newspaper correspondent «Die Welt» in the middle east. And the conflict events of recent days confirm this opinion.

However, if Mr. Trump, prone to fever, and really go to break the "nuclear deal" of the mediating countries with Iran, Iran will have to turn to Russia not sideways, but face. Those who are “sanctioned” can unite against those who “sanction” them. The only question is what scale will this union take. In any case, it is difficult to imagine that after the Syrian achievements, Tehran will abandon the role of the new regional hegemon. Rather, he will claim to be a hegemon with a bomb. Nuclear

Foreign experts, of course, understand this. That is why some of them do not advise Mr. Trump to put pressure on Iran directly. Another thing is to try to find the cracks in the weakened cooperation of Iran and Russia and carefully expand them.

Observed and commented on Oleg Chuvakin
- especially for topwar.ru
Ctrl Enter
Noticed oshЫbku Highlight text and press. Ctrl + Enter
We are
Overseas ally? Donald Trump - US Presidential CandidateSituational analysis of the death of the MH17 flight (Malaysian Boeing 777), made on the basis of engineering analysis from 15.08.2014
Military Reviewin Yandex News
Military Reviewin Google News
36 comments
Information
Dear reader, to leave comments on the publication, you must sign in.