Germany saw what Angela Merkel is ready to save her power

February 14 2018
16
February 7 "great coalition" of the conservative bloc of the CDU / CSU and the Social Democrats from the SPD after difficult negotiations came to an agreement on the formation of the German government. It happened, as they say, on the checkbox, when the time allotted by the German law for this procedure has practically expired. The burghers are satisfied that the protracted government crisis is happily resolved and they have to wait for another formality: the approval of the coalition government agreement by all members of the SPD, which should take place in the form of voting by mail. 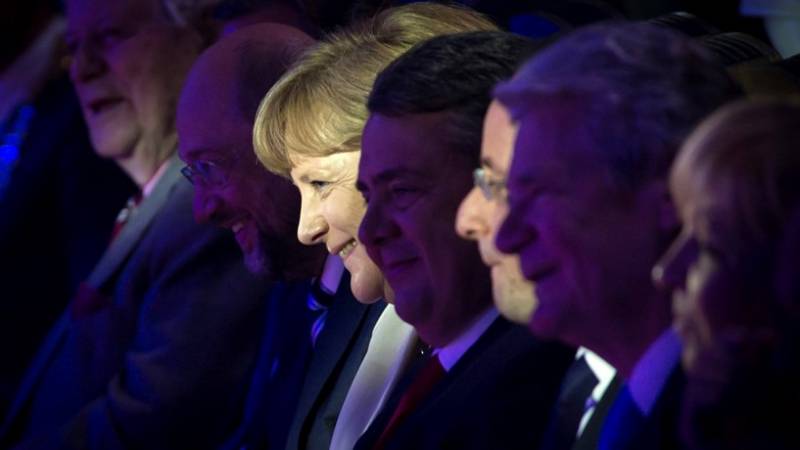 This blissful picture the very next day was destroyed by a scandal in the camp of the Social Democrats. One of the party leaders, the German Foreign Minister Sigmar Gabriel, accused his colleague, the chairman of the SPD, Martin Schulz, of violating the “gentlemen's agreement” on the distribution of posts in the government.

It was on the eve of elections to the Bundestag. Then Gabriel (the most popular politician not only among Social Democrats, but also in the whole of Germany) gave Schultz the presidency of the SPD and the right to nominate the candidate for chancellor of the FRG. In exchange for this, as the German media wrote, citing unofficial sources, Gabriel was promised to keep him the post of Minister of Foreign Affairs.

It was not just an agreement between two personalities. She was actually endorsed by the Social Democrats party bosses. Therefore, not only Sigmar Gabriel was surprised by the statement of Martin Schulz that Schultz himself would head the German Foreign Ministry in the new composition of the coalition government. After all, earlier the leader of the Social Democrats said more than once that "he does not intend to work in the government under the leadership of Angela Merkel."

The very next day after the statement of Schulz, Sigmar Gabriel in an interview with the German media concern Funke Mediengruppe “spilled out all his anger and contempt” addressed to the chairman of the Social Democratic Party of Germany. So local commentators appreciated Gabriel's public outrage at the behavior of his party colleague.

Gabriel reproached Schultz that he "did not keep his word." The scandal, which had sharply gained momentum, quickly turned into a latent inner-party discussion, in order to blow up an information bomb on February 9. Martin Schulz made a new statement in which he refused the post of German Foreign Minister and announced his intention to resign on March 2 from the post of SPD chairman.

“I announce the refusal of the post in the federal government and fervently hope that the debate within the party will end there,” Schultz made a special press statement. - We are all engaged in politics for people in this country. This includes the fact that my ambitions should stand below the interests of the party. ”

The Germans didn’t like the loud internal party discussion in the SPD with the carving of government posts. The Social Democrats' rating fell to a record low. This was recorded on Monday, February 12, by the newspaper Bild, which published data from an actual survey of the Insa Institute of Sociological Research. According to them, only 16,5% of German voters are ready today to vote for the SPD. (Recall that in the last election this party received the lowest result in its stories - 20,5% votes.)

It is noteworthy that five days ago, Martin Schulz felt like a winner. He bargained with Angela Merkel already six ministerial posts. Exactly the same number of portfolios in the new cabinet were received by the Christian Democrats from the CDU, who actually won the autumn elections to the Bundestag.

The high price for the fourth term Merkel

However, the matter is not even in quantity, but as ministerial portfolios inherited by social democrats. The first in importance in this series is the foreign policy department. It is traditionally given to the party - the junior partner in the government coalition. This post provides high popularity to its owner, and at the same time - the party he represents.

However, the main place in the German government hierarchy is still the Ministry of Finance. In recent years (from 2009 to 2017), he was led by “the second person in the CDU”, Wolfgang Schäuble. By his diligence, the methods of German financial management, attitudes towards state debt and resources have become the norm for the European Union. In Europe, the voice of the German minister was largely decisive.

After the autumn elections, Wolfgang Schäuble led the Bundestag. The ministerial chair was vacant for many months, and now the representative of the SPD should occupy it. The Germans understand that this will be a person with different social views on the role of finance in the state, and where he will lead the country - it remains only to guess.

The Christian Democrats were shocked at the decision to give the Ministry of Finance to the Social Democrats. Angela Merkel tried to justify herself, that in order to get out of the protracted government crisis, “painful concessions” were required for the coalition partners. But the Germans have already made a conclusion for themselves: Merkel did not save the coalition, but sacrificed party positions to preserve his power.

This is evidenced by the transfer to the Social Democrats of another key department - the Ministry of Labor and Social Affairs. He has the largest (almost € 30 billion) budget among other ministries of the German government, and, therefore, the greatest opportunities to influence domestic politics and public sentiment.

The concessions of Merkel led to the fact that the popularity of the whole self-named “great coalition” had fallen. The already mentioned survey of the Insa Institute showed that if the elections were held today, only 46 percent of voters would vote for the CDU / CSU and SPD blocs. This is clearly not up to the creation of a parliamentary majority.

The high price for the fourth term Merkel forced to justify not only the acting. Chancellor, but also her fellow party members. The senior member of the CDU and the European Union budget commissioner Günther Oettinger publicly spoke for his leader. He explained that the protracted government crisis made Germany "partially capable" in world and European affairs. He had to go out.

In turn, critics of Merkel noted that the Germans had accumulated irritation not only because the Bundeskanzlerin had delayed the formation of the government. She could not present a large-scale project uniting the nation to the country. This time Ottinger did not find any other arguments besides the statement that Angela Merkel is “a strong politician who will meet the expectations of the party and the public.”

Meanwhile, all the concessions and efforts of Merkel gave so far only an intermediate result. February 20 will begin the so-called “mail vote” 464 of thousands of members of the Social Democratic Party on the coalition issue with the CDU / CSU bloc. It will last until March 2, and March 4 will sum it up.

This is not a formal procedure. Today, no one can predict the result of the “postal voting”. It is obvious that many in the SPD are opposed to the "great coalition." Since cooperation with the CDU / CSU bloc in the latest cabinet of ministers of the Federal Republic of Germany has already brought social democrats serious image losses and has pushed most of the electorate away from them.

Therefore, the heads of the largest regional branches of the SPD opposed entering the new coalition. Among them is the leader of the Moscow Social Democrats, Michael Muller. The youth wing of the SPD (Jusos), led by Kevin Kuenert, is particularly active today. Jusos agitators drive through the lands of Germany and call party members to vote against the “great coalition.”

All this creates an extremely confusing situation, fraught with the most unexpected decisions. Experts estimate the further fate of the coalition with a probability of "fifty-fifty" and remind that very few of the chancellors of modern Germany have safely completed their political career.

Angela Merkel does not hear experts, she is determined to enter a new term of government. On Sunday’s Berlin direkt on the ZDF channel, Merkel said bluntly that she was going to work until the next 2021 election of the year: “I ran for four years. I promised people these four years, and I am one of those people who keep promises. ”

We will wait for what else Angela Merkel will go to realize her undiminished ambitions and remain in power. The fate of her counterpart - Martin Schulz was decided on Tuesday. The presidency and the SPD 13 board of February accepted the resignation of Schulz and appointed the first burgomaster of Hamburg, Olaf Scholz, acting chairman of the party, adding a new intrigue to the prolonged crisis.

In this regard, German political analysts have suggested that now "Germany is on the threshold of the Italian situation with frequent changes of government and regular early elections." This will be the saddest result of the long reign of Angela Merkel.

Ctrl Enter
Noticed oshЫbku Highlight text and press. Ctrl + Enter
We are
Merkel set a new record of political uncertainty in GermanyThe collapse of the CDU / CSU coalition and the end of Merkel's career
Military Reviewin Yandex News
Military Reviewin Google News
16 comments
Information
Dear reader, to leave comments on the publication, you must sign in.