On the revival of the mentoring system in Russia. There is a chance?

February 14 2018
79
"... to the base, and then ..." This phrase from a famous march may well claim to be the motto, which, fortunately or unfortunately, often reflects reality. Moreover, “to the ground” with the subsequent construction is one thing, and when nothing appears after the “to the ground”, and the ruins have to be seen, it is quite another. One example of the embodiment of only the first part of this slogan is the Gorbachev restructuring, the “fruits” of which make themselves felt even three decades after the apogee of its incarnation.


Under the perestroika slogans about updating and accelerating, such ideas and solutions began to be pushed, which ultimately destroyed a huge country, and with it the security system, education, industry ... the list goes on.
Now the proposals from the series “but not whether to restore what has been dismantled” are voiced - that which at one time gave positive results. Offers of this kind are rare, but the very fact that the idea of ​​a local revival still comes to the heads of federal officials is encouraging.

As examples from the already implemented: the revival of the TRP system (albeit in a rather raw form, but still), the creation of a support system for talented young people, the popularization of military service (even 15-20 years ago, the service itself was almost as “slavish duty”), the restoration of many honorary names of military units and formations, the re-creation of the title “Hero of Labor”. Yes, this is just a small part of what can and should be restored for further development, but a start has been made.

Recently, a new proposal was voiced that concerns the restoration of another Soviet practice. We are talking about the proposal of the first deputy head of the presidential administration Sergei Kiriyenko. Kiriyenko, who, after getting into the administration of the head of state, clearly managed to pick up a media weight, offers to recreate a system of mentoring and support in the country. At the same time, Kiriyenko himself says that Vladimir Putin "prompted" such an idea to him.

From the statement of the first deputy head (quotes IA Interfax):
Our task is to revive that unique mentoring system, which, we must pay tribute, was formed by our predecessors in the Soviet years. The whole system of work to support mentoring should become permanent and will bring tremendous results for thousands of boys and girls. (...) It is practically impossible to name a single area of ​​our country, especially that it is a breakthrough task to which you can move without mentoring.

The mentoring system itself was virtually destroyed along with the Soviet Union. However, its islands continued to survive in a format that, when building a market, was clearly out of the “general economic concept”. This is primarily about mentoring in the vocational and technical sphere of education, where in the Russian Federation the concept of “master-mentor” or one of the derivatives - “master of industrial training” continued to exist. However, some time ago, due to the next stage of educational reform, vocational schools were ordered to live for a long time, which young people not only trained workers in specialties, but also (which is no less relevant) tried as much as possible in modern conditions to bring up from »Representatives of the younger generation of members of society who are able to find their rightful place in this society. It turned out in different ways, but the fact is that a truly colossal work was carried out - moreover, the work was based on the very Soviet (undisturbed) model. 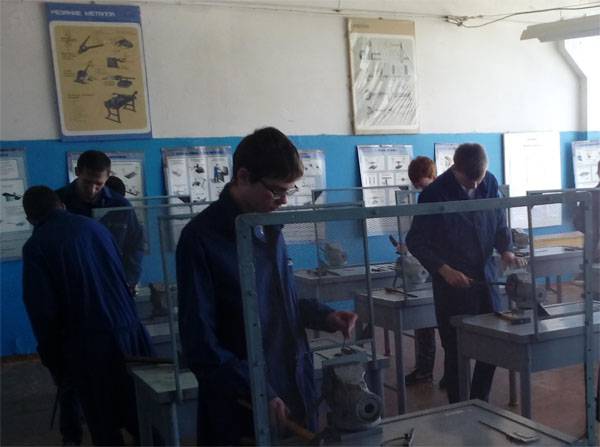 Today, vocational education is reduced to the functioning of technical schools with two levels of education — workers — professions (in fact, an elementary vocational level) and specialties (medium vocational level). At the same time, the state itself cannot decide whether to call mentors mentors or use much more sophisticated Western options - all kinds of “tutors” in order to attract more attention and popularize. Here are just popularizing what?

Now, apparently, common sense begins to take its own (at least, one would like to hope for it), and therefore comes the understanding that you can use beautiful and incomprehensible words as much as you like, but this is definitely not a criterion for improving the quality of learning.

And the mentoring system is a product of the USSR itself, which for many years has been slinging ultra-liberal elites. This product was formed in the 20-30 years of the last century, which we have referred to as referred to only as the years of the “big terror”. In fact, the 20-30 years also became years when the country built a system of transfer of experience and knowledge not only in the format of the educational process itself, but also in production, in other sectors of the economy and social activities.

The very idea of ​​restoring mentoring is undoubtedly good. However, there is one nuance: how viable is it in market conditions?

Here it is worth considering the following fact: the contest “Leaders in Mentoring Practices” ended the other day. During the competition, winners were revealed, who were promised to make their future mentors such future mentors as ministers of the federal government and major businessmen. In addition, each winner received a 1 million rubles in the form of a grant.

As you can see, the system may not be revived in the previous version - the market dictates its own laws. And these laws are that mentors immediately try to associate with money. Perhaps this is for today's realities - the most suitable option, and it can become the golden mean in raising a worthy specialist against the background of the cultivation of a consumer society. But this initiative has a downside: if you act only with such an approach, will the new mentoring become an option exclusively for the elites? Is the state ready to return mentoring in the mass plan? After all, the country needs not only, forgive, effective managers, who will be taken under the wing of other managers. The economy howls without a sufficient number of professional fitters, millers, machinists, doctors, engineers, designers.

If the idea has appeared, then you need to go to the end in its implementation: mentoring should be a mass phenomenon, and not an exception from the market rules for a tick before the elections. And the mass mentoring system involves the promotion of mentors themselves - and here the financial component is quite relevant. As relevant and systematic, and not just one-time contests.
Information has appeared that the Ministry of Labor, the Ministry of Education and Science and the Ministry of Industry and Trade have begun to work out the relevant issues. It is necessary to follow the results.

Ctrl Enter
Noticed oshЫbku Highlight text and press. Ctrl + Enter
We are
Situational analysis of the death of the MH17 flight (Malaysian Boeing 777), made on the basis of engineering analysis from 15.08.2014Results of the week. "God forbid to see Russian revolt, senseless and merciless!"
Military Reviewin Yandex News
Military Reviewin Google News
79 comments
Information
Dear reader, to leave comments on the publication, you must sign in.