Fiends on the Black Sea: the little-known crimes of the Nazis in the area of ​​Novorossiysk. 4 part

February 14 2018
12
The scale of the robbery of the city of Novorossiysk by Nazi gangs, described in the 3 part, was truly epic. However, in the previous part I only described the outright plundering of the local population, aimed at cultivating the famine in the Novorossiysk region, in order to get rid of civilians without attracting punitive forces. But there was another type of robbery, after which any “righteous” scream about Germany being robbed by the Soviet Union seems at least ridiculous.


Do not forget that Novorossiysk, contrary to popular belief, is not a resort town. And not close. Novorossiysk is a working industrial city, a port city. By 1942, there were engineering plants in the city, such as Hammer and Red Engine, cement factories - October, Proletary and others, Novorossiysk Ship Repair Plant, Novorossiysk Car Repair Plant, the port itself with the appropriate equipment and infrastructure. This is not counting the many different factories and plants with a scale equal to or less, including the famous Novorossiysk brewery, which was already known for its quality and modern technology. 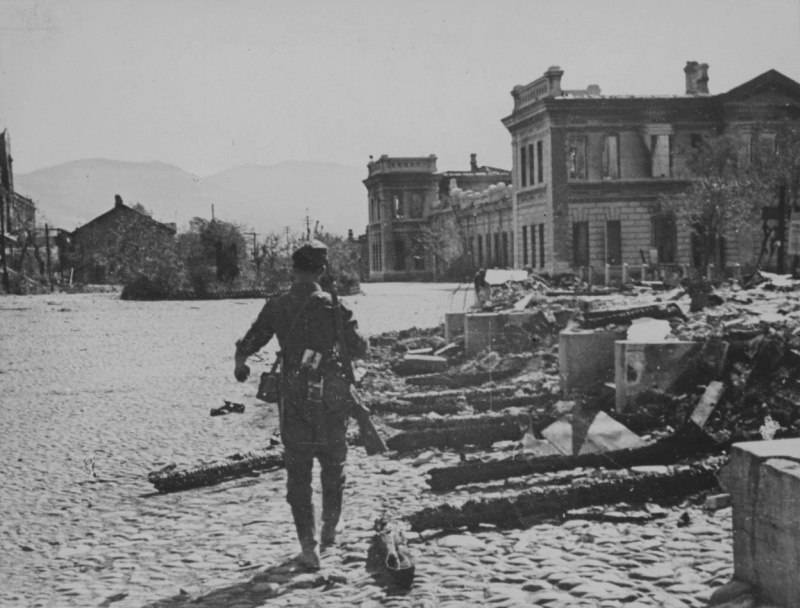 Hitlerite on the streets of the plundered city

Naturally all this stuff the Nazis did not pass by their attention. In the beginning, of course, the Führer and the scumbags of lower rank would like, capturing the city in a hurry, to preserve the infrastructure and use the equipment that had survived the bombing and the railway tracks for their own purposes. Do not forget the convenient port, which, according to the Nazis, was to receive both Type II submarines, S-26 torpedo boats with the Romagna floating base (which the Germans bought from Romanians), and Räumboot minesweepers, and armed ferrymen of the type “ Zibel ", etc. However, the effective fire of coastal batteries, and later the Land Forces landing, put an end to these plans. In February, the opportunity to build on success in the Novorossiysk area seemed quite unreal, and using the port was almost impossible. The Germans were now hoping to at least keep the defense and not to let our troops into the port, so they piled the entrance to the bay with a huge number of mines, not counting the fact that the passage between the eastern and western moles was in fact sealed.

The excesses of the occupation troops, which contributed to the famine among the local civilians, were encouraged by the German command, but they didn’t bring much profits to the Reich itself, except for the destruction of people. Moreover, after many months of robbery and the unconditional deterioration of the situation at the front for the Nazis, the nature of German lawlessness has changed. Many eyewitnesses testify that since the beginning of 1943, the Germans, breaking into the apartments and houses of civilians, no longer tried to steal valuables and clothes (this is almost gone). They put the owners of the house against the wall, and while the unfortunates thought that death itself was behind them, the Germans rushed to the stove or pantry, poured everything edible into the pots and, like starving hyenas, immediately rushed away to fill their stomachs. 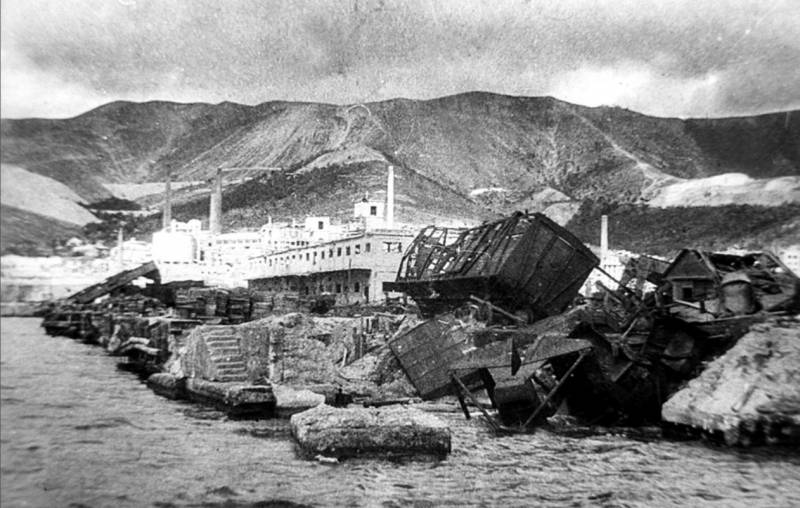 The Nazis did not disdain the analysis of railway tracks - they needed everything, absolutely everything

Sober minds in the command of the German troops already understood that they still had hope to at least stay on the Black Sea shores, there was no hope for the rest. But to leave industrial let battered bombing, but still industrial, the city no one wanted our troops. Naturally, to expect that a flock of military-dressed hyenas would cut off non-ferrous metal, take out machinery, electrical equipment or, for example, diesel generators, in order to present them to their beloved Martha or Lotte, would be insane. Yes, and the Reich from this no good. The Fuhrer’s soldiers were in no hurry to share with the Fatherland gold and precious stones, which they had taken from Soviet citizens.

Thus, in February 1943 of the year in Novorossiysk appeared a structure specially organized for the purpose of robbery and unknown until now for these places. Moreover, this organization has already tried not only to rob civilians, although they did not disdain to do so. They, so to speak, brought the plunder of private property of citizens to a new "industrial" level, since the command did not want to leave this little marauder "joy" to ordinary jackals.

A direct witness of the Nazi rampant rampage, Baranov Pyotr Ivanovich, who lived on the Soviets Street 35, told the commission to investigate the crimes of the German occupiers that the organization known to him under the name VINDO actually operated on the territory of Novorossiysk.

The main functions of "VINDO" were robbery of state property and personal property of citizens. The emphasis was placed on large-sized loot, which standard Hans cannot whistle and put in his pocket or infantry satchel. Under the "roof" of the new organization in Novorossiysk, both ordinary Wehrmacht and Gestapo acted.

The Germans did not have enough of their own forces to carry out the robbery of large industrial facilities. At the same time, the nazi officers really did not want to see how their “superior race”, like greedy jackals, cut off nonferrous metal and take out machine tools from working workshops. Therefore, the mobilization of the surviving locals was practiced. Under the fear of being shot or starving to death, VINDO was able to scrape together a couple of hundred former workers. One of such workers was the witness Peter Ivanovich Baranov, who worked at VINDO as a shoemaker. 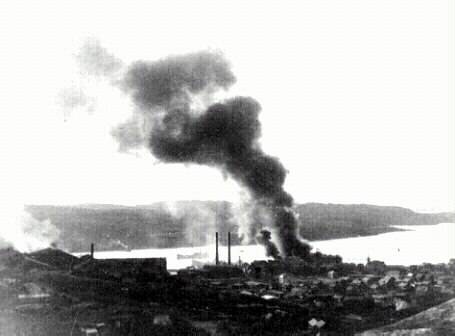 Frequently there were deliberate arsons by the nazis of city buildings, roofs were torn down, windows were broken

The commander of this organization was someone Captain Strauch. According to Baranov, later in this post he was replaced by Chief Lieutenant Muller. These and many other people are directly guilty of the complete plundering of the city. "VINDO" officially legitimizes the theft of Soviet property. Like locust German gangs walked through all the enterprises of Novorossiysk. Any work equipment was immediately dismantled, and the hunt for non-ferrous metal would give odds to the marauding “metalworkers” from 90's. The Germans did not ignore even the furniture - any elegant product from the wood massif, especially noble species, was immediately withdrawn.

Everything stolen was brought to the infamous building of the State Bank, which I mentioned in previous materials. There, the more disciplined Nazis described in detail the items received, packed them and sent them in the direction of Taman. From there, in turn, valuable goods were brought to the Reich.

Thus, since February 1943, namely VINDO and its members, have made their even larger contribution to the general famine in Novorossiysk. After all, the remnants of what the ordinary Reich hyenas could not steal were now taken out with all the systematic and tenacity, including cattle and food. Baranov himself testified that the townspeople were swollen from hunger, there were no dogs and cats in the city. The hell “new Europe” (this is how the eyewitnesses in the testimony testified about the occupiers) brought with all its documentary diligence and systematic character.