What would kill the poor knight? (Swords and daggers of the Middle Ages - part three)

It is estimated that the word knife in the Bible is found only five times, while the sword 194. What does this mean? Of course, the greater importance of the latter before the first. The knife is something household, economic, ordinary. The sword is what separates a weak person from a strong one. He took a sword in his hands and got certain rights. After all, no wonder, by the way, the Bible does not specify what Cain killed Abel. Most likely, he simply stabbed him with a shepherd's knife. But a message about this, being recorded, could lead to unpredictable consequences, which is why it was not placed in the text. 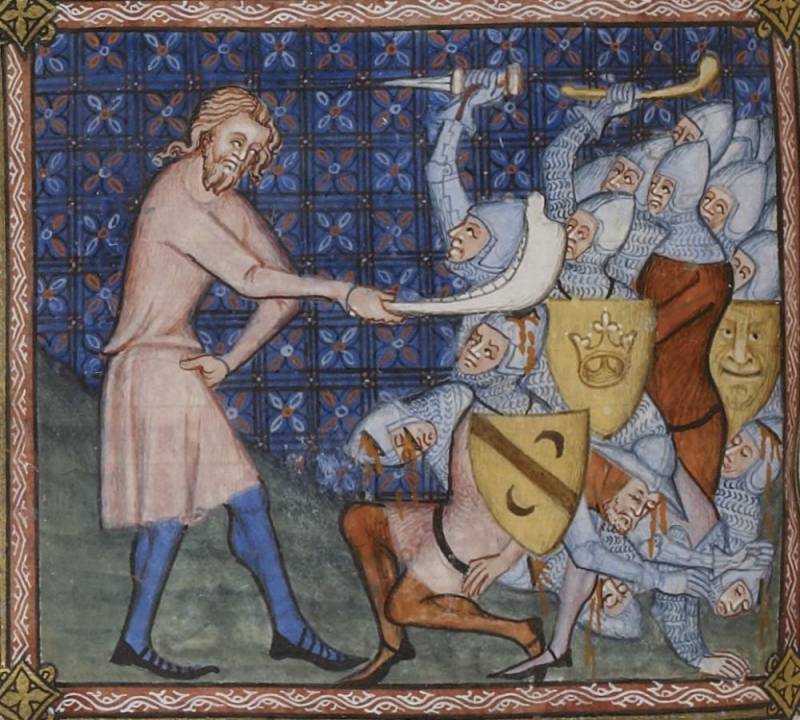 One of the very remarkable miniatures of its time, which may well be considered the original source, despite all the mythology of its plot. And the plot is banal: "He found (that is, Samson - VO) a fresh donkey's jaw and, stretching out his hand, took it, and killed a thousand people with it." The miniature is taken from the manuscript "Mirror stories, Dated 1370 - 1380 (National Library of France, Paris). However, we will remove the donkey's jaw from it, and typical warriors of the era of mail and plate armor will appear before us. ” On their heads are helmet basquets without a visor of typical French uniforms, on one - a “caphel de fer” (“iron hat”), and the warriors themselves are dressed in chain mail, with tubular armor on their hands, along with plate gloves. But note: one of the Philistines swings at Samson with a typical Rondel dagger! So ... at that time such daggers were already in use!

So in the Middle Ages, only the man who had a sword with him and — most importantly, knew how to use this sword — was free. After all, a peasant could, in principle, hang a sword on his hip, but without many years of training he couldn’t do anything against a knight who was given a wooden sword at the age of seven, and since then he has only done that he studied the art of a swordsman. 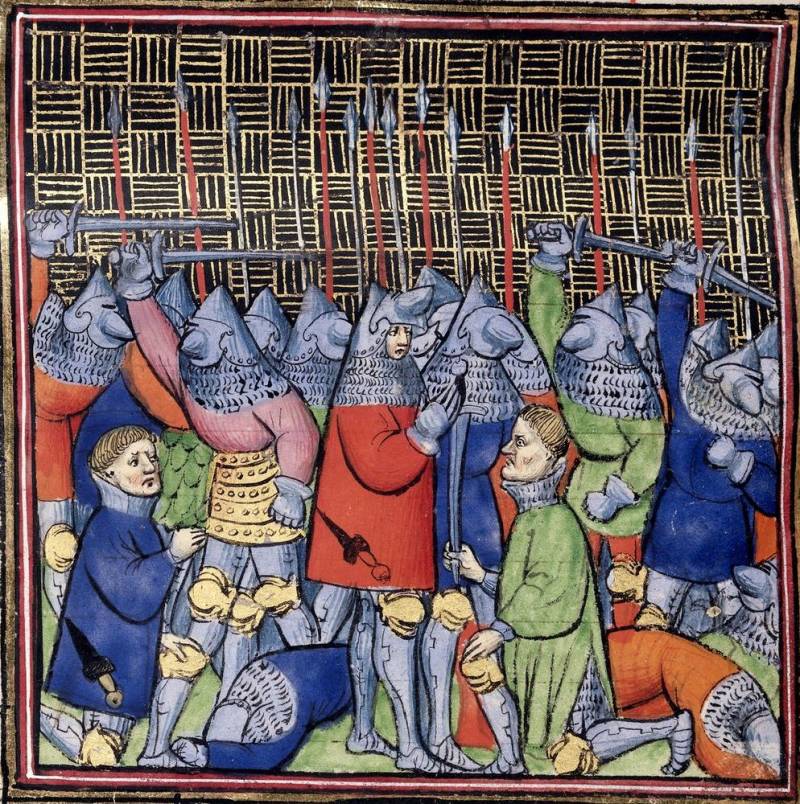 But this is a miniature of the famous "Chronicles of France from Saint-Denis" and the years are almost the same, 1380 - 1400. (British Library). Again, pay attention to the details: on all warriors, Bundhugel-type basquets, mail armor - aventail, caftans Djupons (or zupons), under which armor is hidden, but armor on legs, including loops of greaves, are perfectly visible. It is not clear why, but the kneecaps of all those depicted in the figure are for some reason shown gilded. And the same zhupone some belted, and some do not. The figure clearly depicts knight initiation right on the battlefield, but more interesting is the Rondel daggers, drawn as a dress belonging to two knights. Both of them hang with the handle down and this is the way it should be, since the handle of this dagger was heavier than the blade. But he did not fall out of the scabbard, it means there was some kind of “latch” there. In addition, neither one nor the other warrior has a sling on which the sheath would hang. So they were sewn right on the zhupon! But ... where do they have swords? The bandages, after all, is not visible?

However, today we are again interested not so much in swords as in daggers. Moreover, if in the previous material the source base of our research was directly their artifacts and effigy, today we turn to medieval miniatures — that is, drawings in manuscripts or "manuscripts". We have already referred to miniatures from medieval books several times, and this allows us to draw a number of interesting conclusions. 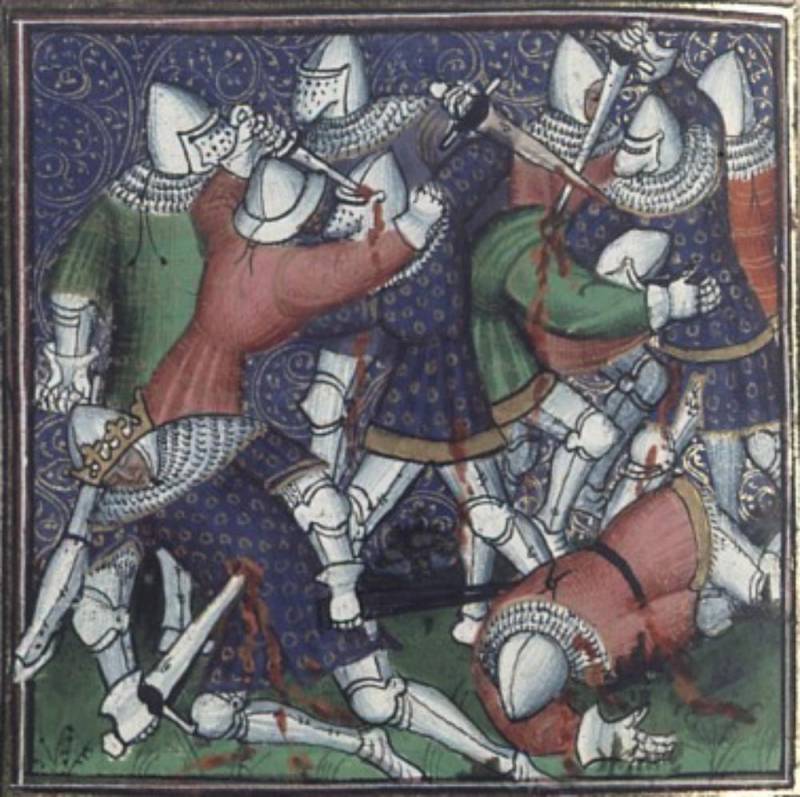 "And this is how they were used in hand-to-hand!" It is believed that the same Rondel was used to finish off his opponents. And despite the fact that killing a knight meant the same thing as cutting a hen that laid golden eggs. However, on this miniature 1400 - 1425's. from the National Library of France in Paris, we see a strange picture: the knight’s suicide in the foreground, behind which the warrior in an iron hat strikes his opponent with a rondel in the viewing slot. 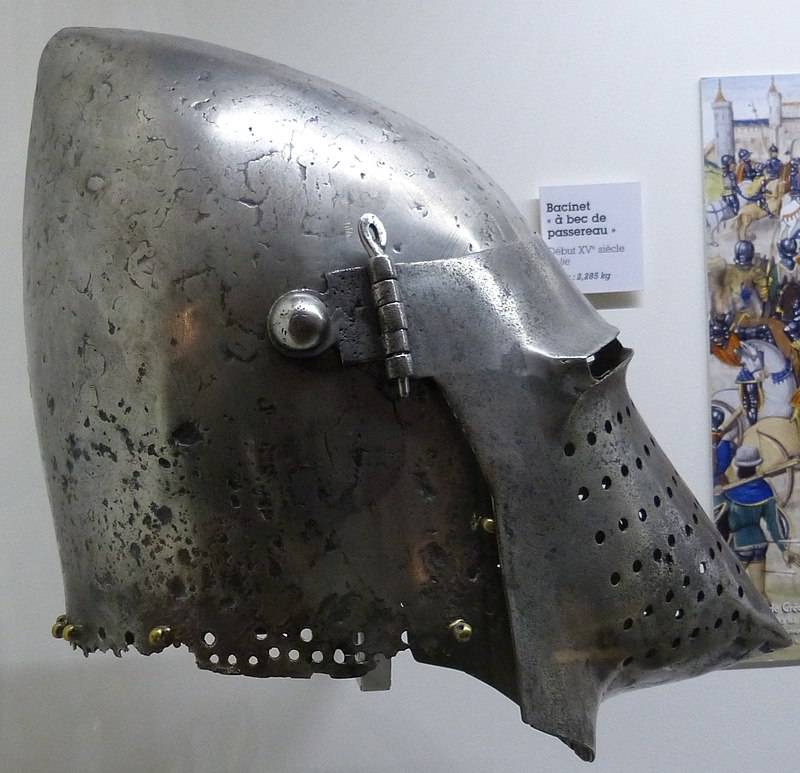 Helmet bascinet such as those depicted on these miniatures from the collection of the Museum of Medieval War at the Castle Castelnau in Perigon, France.

First, medieval miniaturists have not owned a historical perspective for a long time. For example, there is a mass of miniatures depicting the crucifixion of Christ, and in all these “pictures” we see people dressed in the clothes of their time, that is, the time when this miniature was made. But weapon in the hands of the "Roman legionaries" can be very original and unlike any weapon at all. That is ... the artist obviously understood that “then, it is not now” and somehow wanted to emphasize this. The simplest thing was to invent and draw a fantastic type of weapon, whereas it was also long and troublesome to invent clothes. 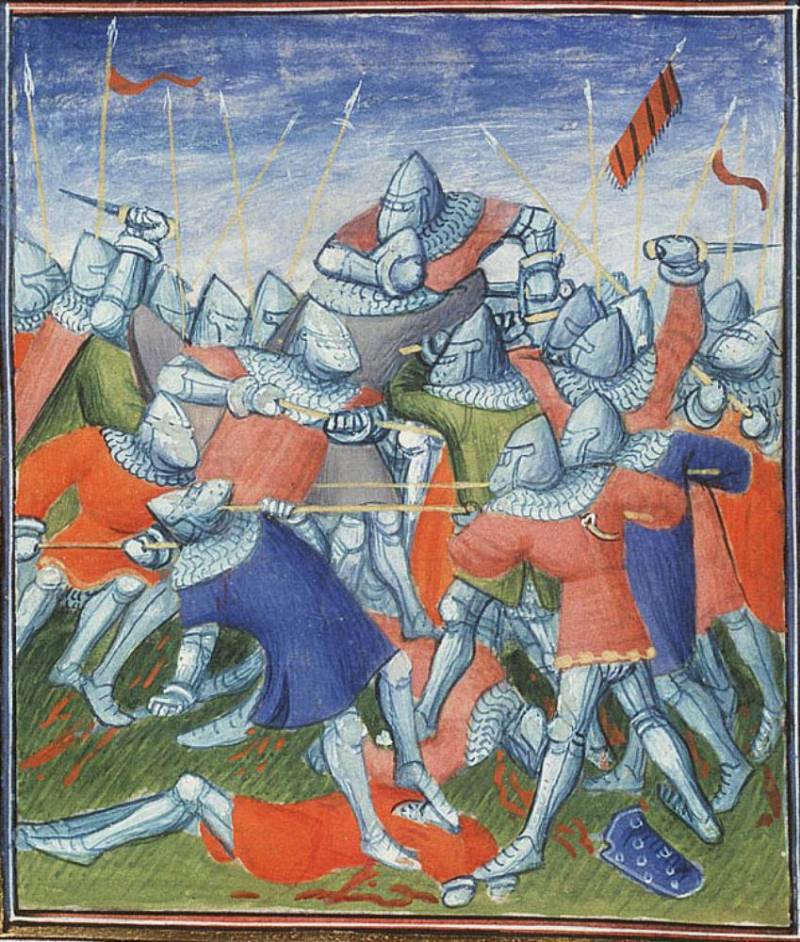 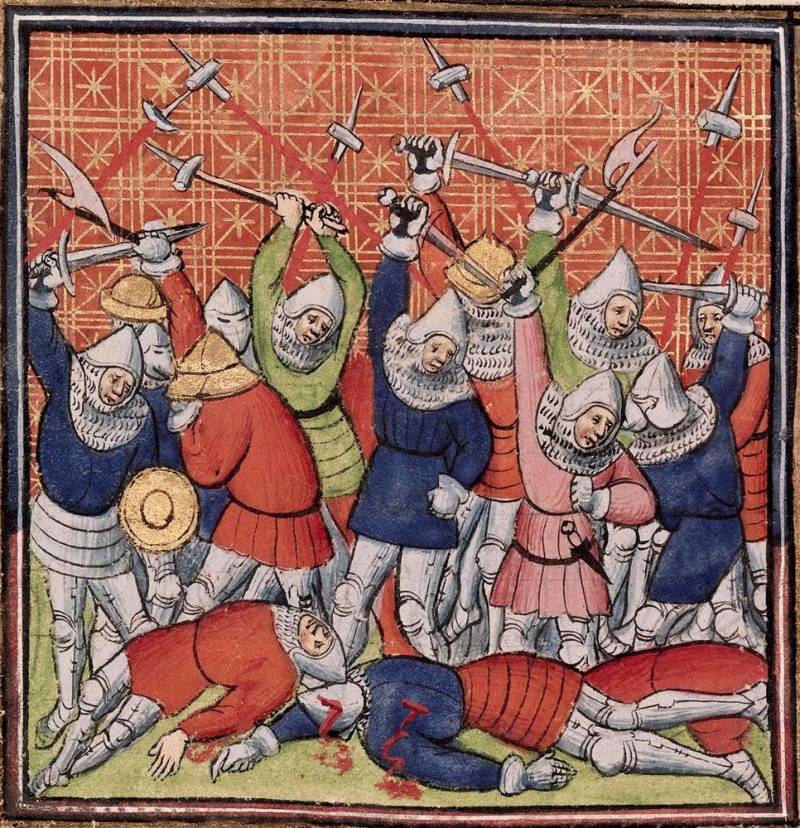 1380 Manuscript Thumbnail - 1400 from the British Library. It shows how the winners finish off the losers. Finish them with swords, axes, daggers and war hammers. Interestingly, the warrior's dagger in the center hangs on his belt for some reason on the left, instead of the sword, and he “works” with an ax! That is, the sword, this "friend" has not earned?

Secondly, the images of weapons served a specific purpose. For example, very often the Saracens were depicted with an eerie type of "curved swords" that never really existed. They are not even on the Arab miniatures proper - all have straight swords. That is, by this very fact they emphasized their dissimilarity with Christian warriors. But we often see the same swords in the hands of European warriors. How to explain it? It is clear that these are not trophies, it is impossible to take as a trophy what is not. What then? And this is an evil satire !!! "Ours" are depicted as expected, but the enemy is armed with infidel weapons. That is - "they are bad." And, by the way, this method is used in propaganda today. 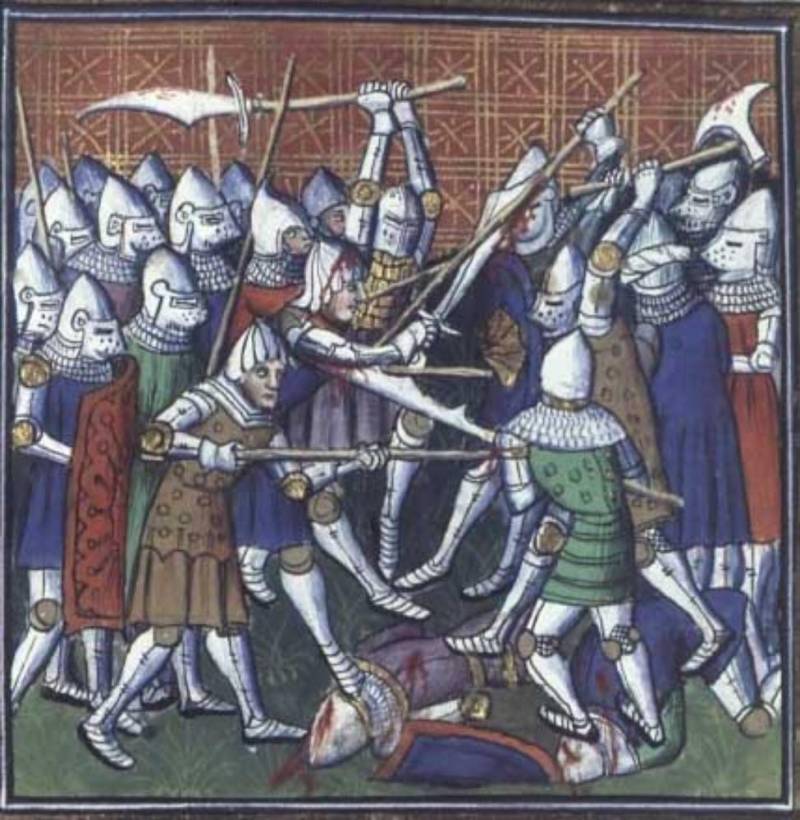 An example of the image of weapons that archaeologists have not yet found, and perhaps they will never find, is this miniature from the Ab Urbe Condita manuscript 1400 – 1425. (National Library of France, Paris). Here we see felchen, as well as two absolutely terrible axes, while the rest are fighting with spears and axes. Daggers on the clothes no one else has. But all in typical for the time helmets, bascinet and zhuponah.

So you can trust medieval miniatures as a source, but provided that miniatures depicting the Trojan War from the 13th century manuscript are not recorded in the sources for the Trojan War, as well as the miniatures from “Roman about Alexander” (meaning Alexander the Great) . Further, they can be trusted if the images on them are correlated with the artifacts that have reached us. That is, shields with a convex image of a human face most likely should be recognized as a miniaturist's fantasy. But shields with shackles and umbon - reality, because we see them in bas-reliefs, in the hands of effigiy, and a number of such shields found in the swamps and ... even now we can hold some of them, preserved in the walls of castles and monasteries. 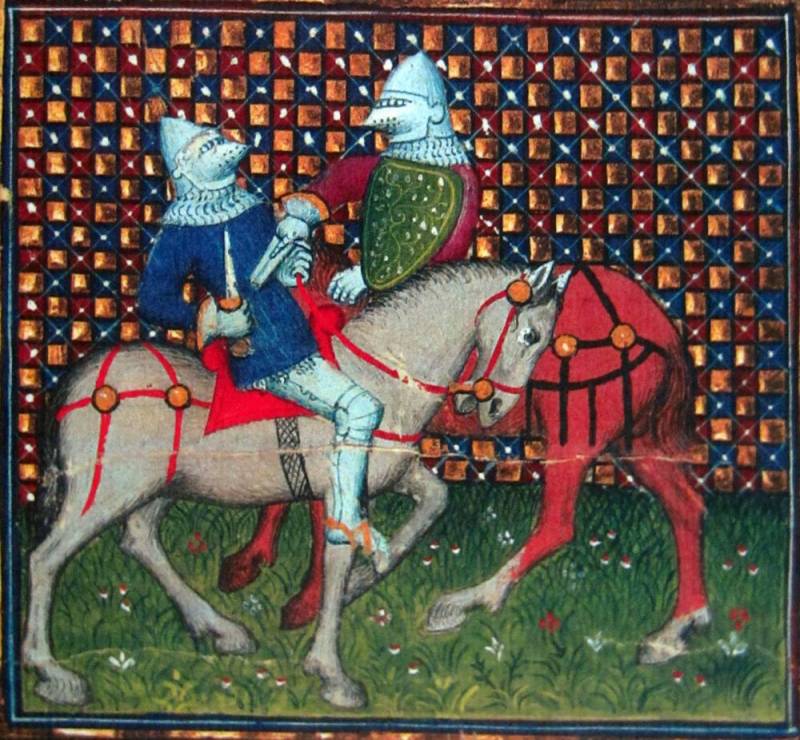 Strange kind of scene. One knight pierces another with a sword, and for some reason he holds a dagger in his hand ... 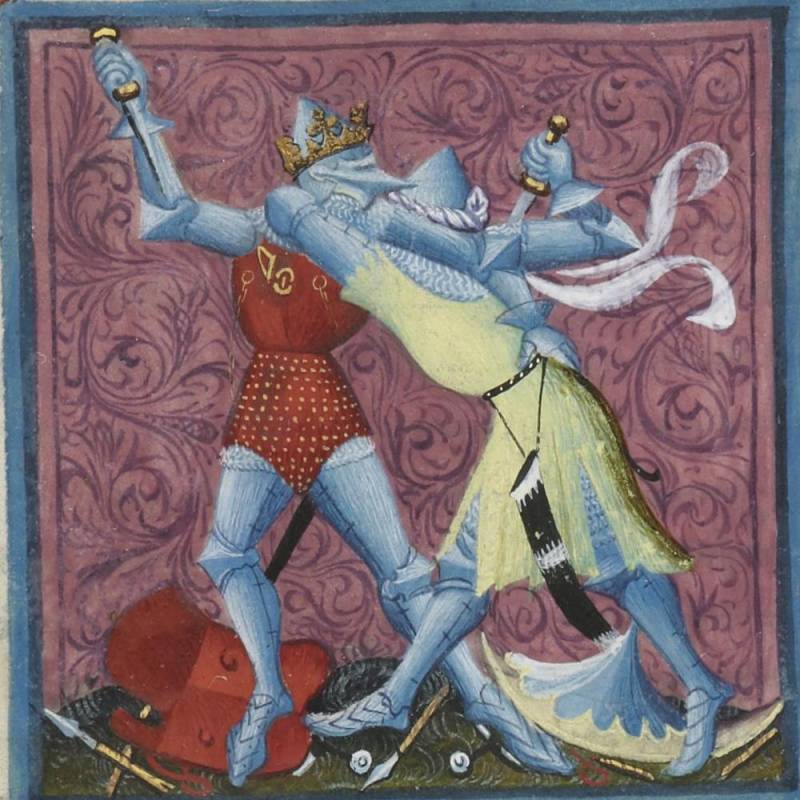 A very entertaining fight scene. 1400 Wandering Knight (National Library of France, Paris). On the knight on the left is a typical brigandine, and with two chains and a hook for a spear. The crown on the helmet can mean anything, it can be a king, a baron, and just a positive character, such was the fashion. The eastern knight on the right had an amazing (judging by the sheath) sword, but lost it somewhere. Judging by the mythical shield and scabbard from the sword, it is ... "not our man," "bad." But all the rest of the equipment is similar to the “hero” on the left. Well, did not the miniaturist see the eastern knights and how to depict it "in the oriental way"? So he added a sword and a shield to him, and even the dagger gave him an ordinary hand - the usual Rondel!

The same goes for weapons. The frequency of finds and images should be correlated, that is approximately the same. And if this does not happen, then we can assume that we are dealing with ... beautiful fashion, a tribute to time, or even the unbridled imagination of the artist. 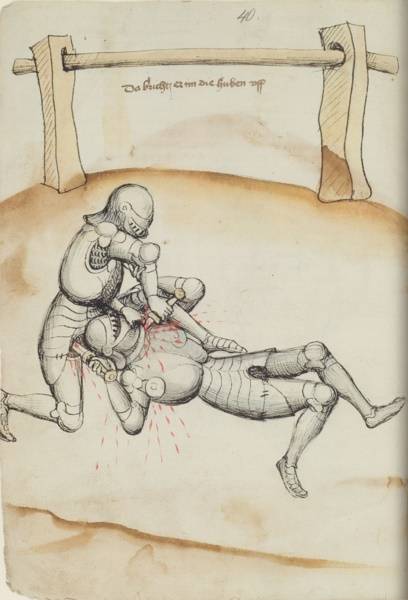 But on this series of miniatures from the site "military miniature" shows the "fate" of a knight struck with a dagger.