February 13 2018
71
Belarus is preparing to make Russia a serious competition in the international arms market. Minsk is going to actively promote for export seriously upgraded still Soviet air defense systems: Buk-MB air defense missile system and its own developed MLRS Polonaise system. Of course, it will be very difficult for the Belarusian military-industrial complex to compete with the best models of Russian weapons, but it will get its part of the market, especially in the segment weapons “For the poor,” and there’s absolutely nothing wrong with that.


According to the results of 2017, Belarus exported various military products for more than a billion dollars, said Oleg Dvigalyov, who is the chairman of the State Military-Industrial Committee of Belarus. At the same time, the list of Belarusian military equipment exported today is quite extensive. It includes anti-aircraft missile systems, multiple rocket launchers, radars, EW systems, optoelectronic devices, armored cars, military vehicles, special-purpose computers, robotic systems, and drones.

The achieved indicators allow the country to enter the Top 20 of world arms exporters over the past few years. At the same time, the Republic of Belarus seeks to maximize its sales markets. According to Dvigalev, in 2017, the country increased its exports of military products by 15 percent, while its own production of military equipment grew by a quarter. According to the Belarusian official, 2017 year became for Minsk “the year of conquering new markets”: products and services of military enterprises from Belarus were supplied to 69 countries (in 2016, they were 60).

According to the Belarusian Internet newspaper Naviny.by, the country's military-industrial complex is stepping up efforts to produce high-tech weapons for the needs of foreign customers. Often this is a more advanced weapon than what is currently in service with the republic’s own army. One of the systems actively promoted for export is the deep modernization of the Buk anti-aircraft missile system created in the USSR. The new model ZRK was presented 31 January 2018 of the year at the exhibition of developments of the State Military Industrial Committee (Goskomvoenprom) of Belarus for 2016-2017 years. 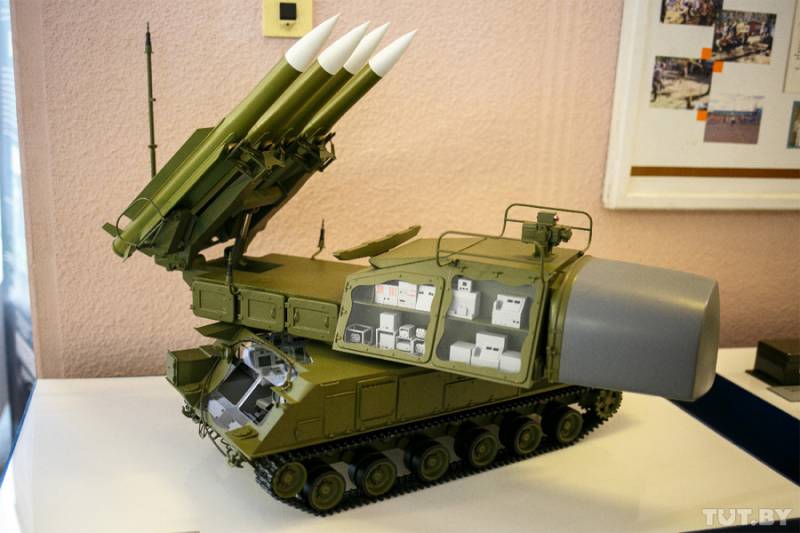 ZRK "Book MB" layout
We are talking about the modification, which received the designation “Beech MB”, it was developed by enterprises and organizations of the Gosvoenprom system, among which OJSC Agat - Control Systems is the managing company of the Geoinformation Control Systems holding, research and development company OKB TSP, OJSC 140 Repair Plant and OJSC 2566 Radio Electronic Equipment Repair Plant. According to Vladimir Lavrenyuk, a representative of the Gosvoenprom, this modernization of the Buk missile system qualitatively differs not only from the base model of the complex, but also from its subsequent versions, including the Beech M1-2, which is still in service with the Belarusian army. Lavrenyuk noted that the degree of modernization of the complex allows us to speak about the creation of a new Belarusian air defense system. As a result of the deep modernization of all outdated equipment of the air defense missile system was replaced with modern parts, the complex is fully implemented on the new element base. As part of the modernization for the "Buk MB" in Belarus, created more than a hundred new devices and units.

The “Buk MB” air defense system is able to work with any types of modern automated control systems, as well as digital radar systems. The introduction of fundamentally new technical solutions into the complex made it possible to increase the target detection range by a radar of a self-propelled firing system (SOU) immediately by 30 percent, as well as confidently carry out automatic target recognition by trajectory characteristics and automated - by sound portrait. Significantly improved the characteristics of systems suppressing both passive and active interference. Separately, the presence of a built-in complex simulator system, which allows operators of the Buk MB system to conduct training both as part of the complex and autonomously along its combat elements, is highlighted.

If each self-propelled fire installation of a modernized complex is single-channel in purpose, then in general, “Buk MB” in its standard configuration has already six target channels. In the conditions of modern combat, this is important for reliable covering of protected ground objects and repelling a massive air strike. Since the modernized complex's SOW are independent firing units that can operate both as part of the air defense system and independently, the Buk MB has a higher combat survivability, which is especially important when the enemy uses modern anti-radar weapons. 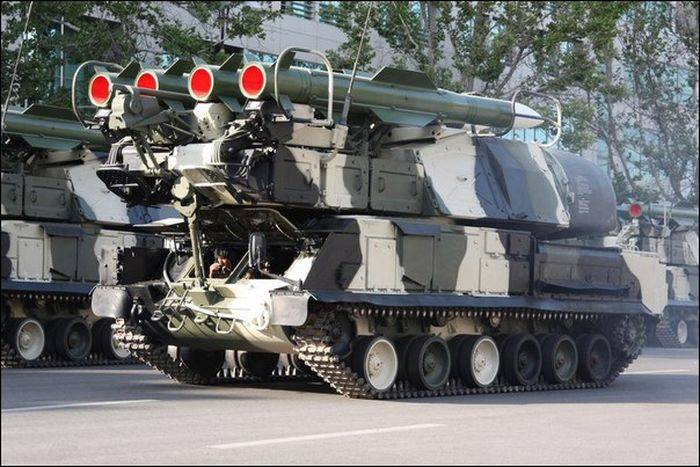 According to the information of Belarusian manufacturers, the project of the modernized complex “Buk MB” is primarily focused on exports to poor countries, for which the products of the world's leading manufacturers of weapons, for example, Russia, the USA and Israel, are very expensive. According to the authors of a specialized Internet resource janes.com, the Buk MB system is attractive to buyers because it has already been tested in practice. For example, the buyer of this air defense system is already the armed forces of Azerbaijan, they received from Minsk two divisions of the Buk MB air defense system under a contract that was signed back in 2010 year. The first of the divisions was first shown to the public as part of a military parade in June 2013. It is known that the Azerbaijani military successfully mastered the new complex, as evidenced by the message on the official website of the Ministry of Defense of Azerbaijan from 14 October 2017.

According to published information, on the instructions of Colonel-General Zakir Hasanov, an inspection was conducted of the state of readiness of the existing Buk MB air defense system of the Azerbaijani air defense forces. When performing combat training tasks in the face of complex radio-electronic interference, units of the Azerbaijani Air Defense Forces were able to detect and escort small-sized high-speed air targets of a conditional enemy, which were then successfully hit.

It is known that the countries of Central Asia (including Kazakhstan), as well as countries in Africa, the Middle East and Latin America, are showing interest in the modernized Belarusian version of the Buk air defense system, and there are potential buyers in Europe, in particular Serbia . Military experts agree that the interest is due not only to the high declared standards of the complex, but also to the financial aspect. For example, some developing countries are unable to acquire the Buk MB system in a standard configuration due to a lack of funds. For such buyers, Minsk, due to the modular architecture of the complex, can offer a truncated configuration of the division with the 4 SOU. 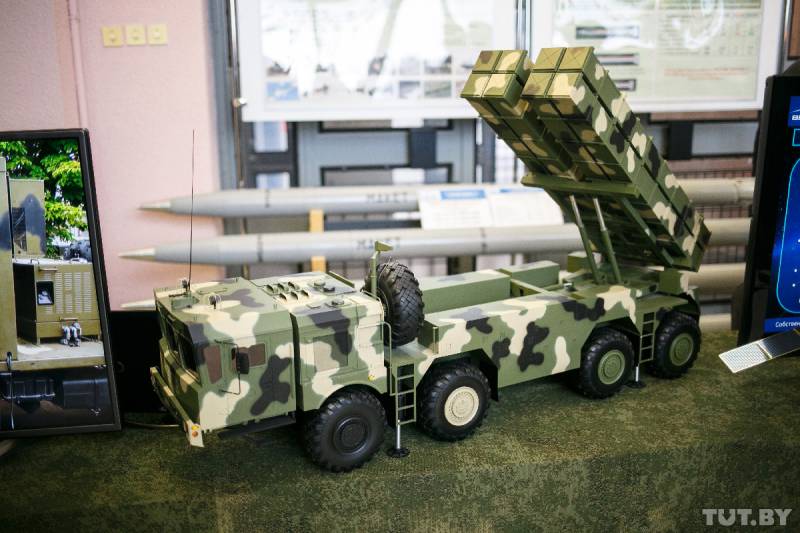 MLRS "Polonez"
The second promising development of the Belarusian military industrial complex, which has very good export prospects and can really compete with Russian developments, is the heavy MLRS “Polonez”, whose adoption, as well as access to the external market, should occur in the 2018 year. The system came out so successful that Alexander Lukashenko massively presented the design teams that participated in its development to awards.

Many compared this system with the Russian MLRS "Smerch", but this is absolutely wrong. "Polonaise" surpasses in range not only the "Smerch" (90 km), but also the more advanced Russian complex "Tornado-S", whose missiles can hit targets at a distance of up to 120 km. "Polonaise" now can hit targets at a distance of 280 kilometers. The caliber of missiles is the same - 300 mm. In fact, we are talking about the installation, which is analogous to the American multi-purpose MLRS M142 HIMARS, exceeding it in firing range by half.

The launcher of the MLRS "Polonez" does not have tubular guides traditional for Soviet and Russian installations. Instead, they use special packages-modules with transport and launch containers box-section. After the launch of the missiles, such a package module is removed and removed for recharging to the manufacturer, or for recycling, and a new one is installed in its place. This technology allows you to reduce the time to recharge the installation and the implementation of re-volley. One machine carries 8 rockets.

Originally, Chinese-made rockets were used with the complex. Most likely, it was about the A-200 missiles with a firing range of up to 200 km. Then it was upgraded to increase the range. Currently, the rocket is produced at the Precision Electromechanical Plant in the Dzerzhinsky District. The chassis of the complex - MZTK-793 produced by the Minsk plant of wheel tractor. This chassis allows the complex to reach speeds of up to 70 km / h. 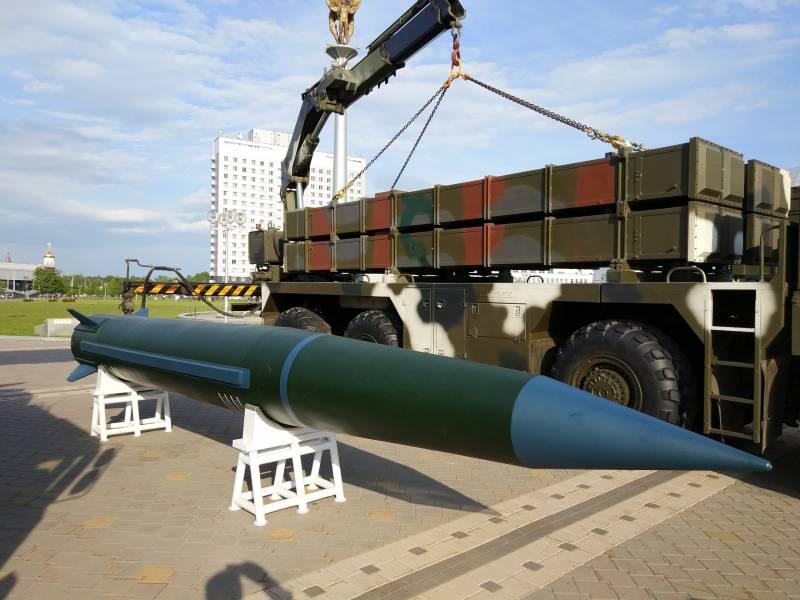 MLRS "Polonez"
In October, 2017, in the Gomel region, tests of a modernized version of Polonaise were carried out. As Major-General of the Reserve Anatoly Vankovich, director of the Precision Electromechanics Factory that manufactured the new missiles, told the Belarusian media that this unique weapon makes it possible to hit targets at a distance of up to 300 km. According to Vankovich, the rocket of the complex flies at an altitude of about 50 km, it dives at the target almost vertically, while having a speed corresponding to five speeds of sound, it is resistant to interference. All this makes the defeat of its means of air defense / missile defense a very difficult task.

This MLRS is designed to defeat openly located and sheltered enemy manpower, armored and unarmored military and military special equipment, artillery. The probable circular deviation when firing at maximum range does not exceed 30 meters. Such accuracy, combined with other advantages of this missile system, allows us to solve a variety of tasks on the battlefield, including those characteristic of bomber aviation and operational-tactical missile systems.

As already noted, with the use of new 300-mm Belarusian corrected missiles, which are being tested in Belarus at the present time, the range of the complex is twice the performance of the American MLRS HIMARS. The missiles are equipped with a combined correction system based on inertial and satellite navigation systems. The warheads of missiles can carry different types of equipment: fragmentation cassette, high-explosive fragmentation, cassette with self-targeting anti-tank combat elements, etc. The MLRS “Polonez” battery, consisting of six combat vehicles, is able to cover up to 48 detached targets with one volley, located on an area of ​​100 square kilometers. Each of the 8 missiles launched from the launcher can be guided to its target.

Tests of the MLRS “Polonez” with a fully Belarusian-made rocket are planned for the first half of 2018. The State Secretary of the Security Council Stanislav Zas told reporters about this. According to him, the Polonez complex is all Belarusian, the rocket is partially ours. The task is to make it fully Belarusian. “At present we have come to the tests of the complex with our rocket. I really hope that we will spend them in the first half of 2018, and they will be successful, ”said Stanislav Zas. 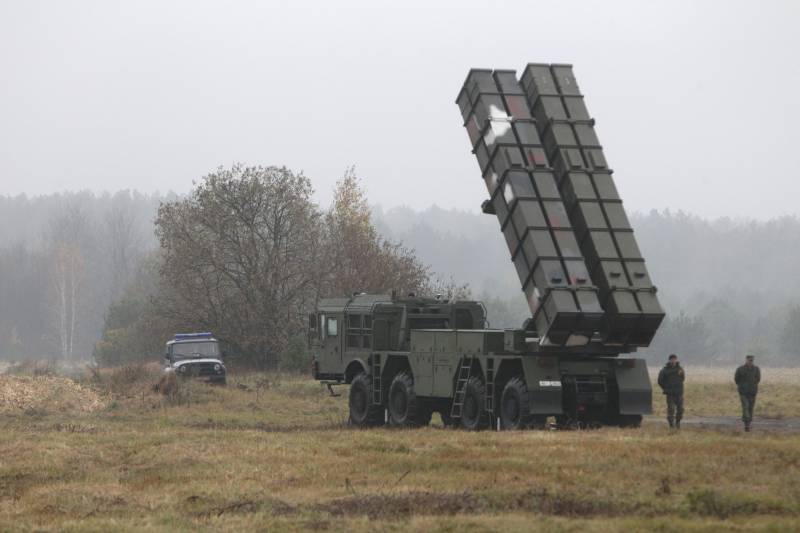 MLRS "Polonez"
The first export buyer of the complex can be Azerbaijan, which has a substantive interest in “Polonez”. Earlier, Russia supplied Iskander-E OTRK to Armenia and Baku was interested in finding a counterweight. Perhaps it was to discuss the details of this transaction, the Minister of Defense of Azerbaijan, Colonel-General Zakir Hasanov, came to Minsk in October 2017. Some experts believe that Baku has even made an advance payment for these complexes. As high-ranking Azeri military men noted, the Belarusian artillery launch of the Belarusian production is almost as good as Russian Iskander E.