February 13 2018
48
For some time now, the NATO patron 5,56х45, which is central to the individual weapons The North Atlantic Alliance, under which released countless samples of combat, service and civilian rifles and carbines, is being criticized. 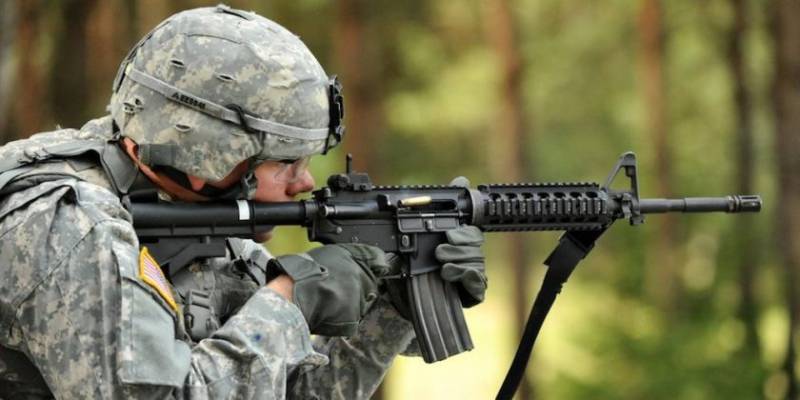 
Adopted by the US Army in the 1964 year, together with the AR-15 rifle, this low-pulse, and one can say revolutionary cartridge for that time ensured acceptable accuracy of automatic fire and effective action on the target at short and medium distances. In addition, its low weight allowed us to increase wearable ammunition almost two-fold, compared with the NATO 7,62x51 cartridge. Of course, the new cartridge is somewhat inferior in effective range to its predecessor.

Thus, the famous American practitioner-gunner and instructor Gabriel Suárez stands for “acceptable wound ballistics” 5,56 x45 with a distance of 200 yards. But for an assault rifle such indicators were considered sufficient.

Since the beginning of this century, the military of the Western bloc countries have increasingly expressed discontent with this patron. Most of the claims were related to operations in Afghanistan and the Middle East. In particular, in connection with the widespread use of “belts of shakhids” among militants, the NATO military began to complain about the lack of “lethal action” that does not ensure the guaranteed elimination of the enemy from a single shot. In addition, it is reported that NATO’s 5,56X45 bullet is not very effective against targets protected by body armor, which today are widespread even among militants of illegal armed formations.

Based on the Afghan and Iraqi experience, the US Department of Defense presented a report stating that it was no longer possible to postpone the replacement of the “assault rifle-cartridge” rifle complex. As, according to the document, the weapons of the American military were inferior in some parameters to AK-47, the main weapon of the enemy.

It was said about the lack of penetration ability of the cartridge 5, 56х45, whose bullets could not even penetrate the sides of the truck in some cases at a time when the lines from the AK were easily pierced through the walls of brick and foam blocks and hit the fighters who had hidden behind them.

Including, on the basis of this report, several contests were announced to replace an assault rifle, but all of them ended in nothing. One of them, “Interim Combat Service Rifle”, which involves replacing the current individual weapons with a rifle complex based on the 7,62x51 cartridge, was completed ahead of schedule last fall under the pretext of redistributing the military budget. However, the experts gave a “surprising” conclusion about the unsuitability of the cartridge of this caliber for assault rifles due to excessive scattering. As if this circumstance did not become the main reason for adopting in the 1964 of the rifle complex under the cartridge 5,56х45!

It must be said that gunsmiths offer several options for a compromise, trying to achieve higher power, with moderate returns. So in particular was the cartridge 6,5х39 Grendel, which became widespread in the civilian market. Or the cartridge 6,8X43 Remington SPC, which, in combination with the Barrett REC7 carbine with a short stroke of the gas piston, participated in the Pentagon’s program to create a “future rifle”.

An even more revolutionary approach was implemented in another contestant of the competition - Textron carbine. The innovative 6,5 mm cartridge used in it has an unusual layout - the bullet is completely hidden in the sleeve, which is made using polymers.
However, the chances that these or similar complexes will become mass armaments of armies are small. After all, any transition from the widespread types of ammunition for existing small arms is associated with huge costs for procurement and logistics.
In this regard, the approach of the Israelis seems to be much more promising, as they strive to maximize the characteristics of the available ammunition.

The Israeli portal Globes reports that the company Israel Military Industries has announced serious achievements in the modernization of the NATO 5,56x45 cartridge. They created a cartridge, the successful tests of which showed that it exceeds the penetrating ability of a 7,62 caliber bullet. (It’s not specified which cartridge - 7,62х39 or 7,62х51. Since their nomenclature is huge and the characteristics are different, without specifying which ammunition is being compared with, this statement is more like a publicity stunt).

It is possible that if the Israeli developers really managed to create a munition with improved characteristics, it will allow to remove some of the claims to the existing assault rifles under NATO 5,56x45.

How necessary is this in reality? In modern wars, which lead the Western bloc and Israel, they prefer to avoid contact clashes, and an assault rifle for most of the soldiers of these armies, rather a self-defense weapon used at distances where the capabilities of the regular M855 cartridge are sufficient. Special Forces has the ability to use any weapon of a limited standard suitable for its tasks. That is, the task of replacing, or even modernizing, the “cartridge-assault rifle” rifle complex for most NATO countries is by no means a priority (as the Pentagon representatives actually acknowledged with regard to the Interim Combat Service Rifle program).

Most of the announced contests are more likely connected with the appetites of gunsmiths and their lobbyists in government bodies and military departments.
Incidentally, Israel Military Industries Israel’s Ammunition Division Chief, Israel’s Supermouth, stated that the company’s “superpool” was developed by the company as a proposal for a request from the armed forces of many countries in need of universal munitions with improved performance, combining high accuracy and penetration.

That is, the objectives of the program are purely commercial, and are mainly focused on export. And if the development is really successful, it may well be in demand on the global arms market. In any case, there are prerequisites for this. The legend of "weakness", and even the "unsuitability" of the standard NATO 5,56х45, has taken firm roots in public consciousness.

Ctrl Enter
Noticed oshЫbku Highlight text and press. Ctrl + Enter
We are
Sniper fire in local warsWhat should be a modern sniper (part of 1)
Military Reviewin Yandex News
Military Reviewin Google News
48 comments
Information
Dear reader, to leave comments on the publication, you must sign in.