February 13 2018
13
By the early sixties, the Special Design Bureau of the Plant. I.A. Likhachev completed the main work on the family of all-terrain vehicles ZIL-135. Finished equipment went into series and became the basis for several special army vehicles. Soon there was a proposal to create a new all-terrain vehicle, having an electric transmission. Working through this question, SKB ZIL created several mock-up samples. The first of these is known under the unofficial name ZIL-157.


15 July 1963, the USSR Council of Ministers decided to begin the development of a promising ultra-high-drive wheeled vehicle equipped with electric transmission. The creation of such a sample was planned to attract various organizations of the automotive and electrical industries. The leading role in the new program was to be played by SKB ZIL, headed by V.A. Grachev. This design organization had a great experience in the field of all-terrain vehicles, and also had some experience on the topic of electric transmission.

In August of the same year, SKB ZIL established technical requirements for the future prototype model. The chief designer of the new project was A.I. Filippov. It was decided to entrust the development of electrical devices for an all-terrain vehicle to the State Experimental Plant No. 476 named after F. Dzerzhinsky (later renamed the Moscow Dzerzhinets Aggregate Works). V.D. became the leading designer of the new transmission. Zharkov. The prospective project received the official designation ZIL-135E. 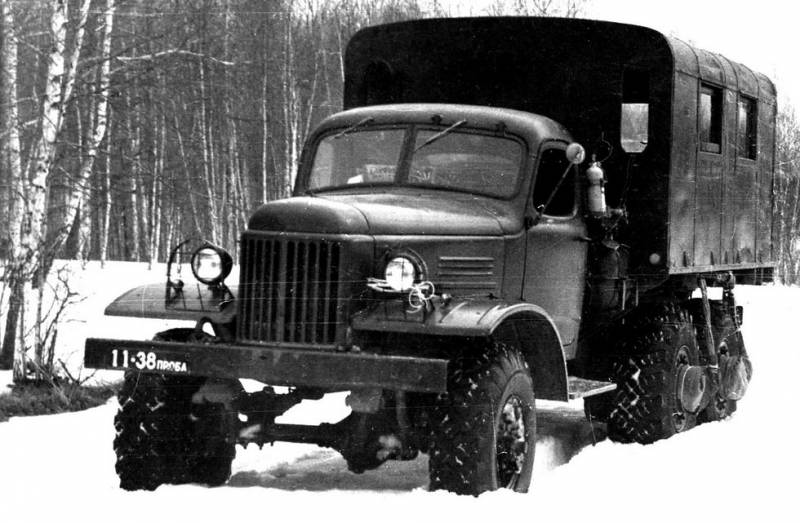 It should be recalled that by this time ZBL SKB had time to complete work on the so-called. 9P116 helicopter launcher for the airmobile tactical missile complex 9K74 / Mi-10РВК. This machine was actually built around a cylindrical container for a rocket, and therefore equipped with an electric transmission. The motor-wheels of the launcher should have received electricity via cable from a helicopter carrier. Some developments on an unusual product 9P116 planned to use in new projects. Moreover, a part of its components had to go to new cars.

Before starting the development of a full-size all-terrain vehicle, it was decided to test the electric transmission on a smaller prototype model, built on the basis of a serial truck. In the early summer of 1964, SKB ZIL began to design a similar prototype electric ship, the basis for which was the ZIL-157 truck. It is curious that the first prototype with electric units did not receive an official designation. He stayed in stories under the unofficial name ZIL-157E, which can be confusing. The fact is that the letter “E” also denoted the export version of the serial truck ZIL-157.

In the framework of the “trial” project, the engineers of the Special Design Bureau had to make minimal changes to the design of the original ZIL-157, allowing the desired inspections of the new units. Thus, the new prototype model had to repeat as much as possible the design of the base machine, but at the same time carry a certain set of special units. All these tasks were successfully solved, and a car was brought to the landfill, which externally differed little from the base truck. A prototype model issued only some elements of the chassis and features of the layout.

The basis of the prototype model still lay a rectangular frame of metal profiles. In front of her was the driver's cabin, in front of which was placed the engine hood. Directly behind the cab, in the former place of the spare wheel, were the fuel tank and batteries. The rear cargo area of ​​the chassis was given for the installation of a rigid body van. Experienced ZIL-157E had a non-standard layout. Apparently, a regular powertrain was removed from under the hood in front of the cab. The engine and the elements of electric transmission now had to be in the van. Such placement simplified the operation and maintenance of the experimental units.

In the van placed a gas-electric power unit, built on the basis of the engine ZIL-375. The motor developed power up to the 180 hp, and its torque was fed directly to the shaft of the GET-120 generator, which produced a direct current with a power of 120 kW. Through the control devices, the current through the cables arrived at the traction motors of the drive wheels. The use of electric means of power transmission from the main engine to the traction engine made it possible to abandon the existing mechanical transmission. The prototype has lost all the drive shafts, transfer case and some other devices. Also, the chassis has undergone the most noticeable changes.

In the initial configuration, the ZIL-157 truck had a three-axle undercarriage with an 6x6 wheel formula, built on the basis of axles with dependent suspension. When building a new prototype model, the existing front axle, in general, retained its design. As before, it was suspended on longitudinal leaf springs and had wheel controls. At the same time, the driveshaft did not fit him now. The wheel formula of the car has changed to 6x4.

Rear axle drive with elastic suspension were dismantled. Instead of them, on the frame of the electric ship, additional power elements were installed, to which single-pitch motor-wheels, borrowed from the 9P116 launcher, were rigidly fastened. The wheels of the new design were equipped with DT-22 traction motors and two-stage planetary gearboxes. Electric power was supplied to each engine through a cable that was taken out of the chassis. Cables left the sides of the van and went down to the wheel hubs.

The chassis has retained the existing centralized tire pressure adjustment system. With its help, the driver could change the pressure in wide-profile tires and thereby change the characteristics of the terrain on different surfaces.

The use of a new transmission has led to the need to use special controls. The steering system of the prototype remained the same, but other instruments were now offered to monitor the operation of the power plant and transmission. The driver could control the operation of the main gasoline engine, as well as control the parameters of four electric motors. Thus, the number of toggle switches and levers in the cab increased markedly. Like serial vehicles, the experimental ZIL-157E did not have an amplifier in the steering system.

There were no special requirements for the cab and the body, and therefore the prototype model ZIL-157E was completed with standard serial units. The existing all-metal cabin with three seats, a heater and opening windows was kept. Access to the cabin was provided by an ordinary pair of side doors.

To accommodate the power unit was used metal box body closed type. In its front wall there was a pair of side vertical holes for the supply of atmospheric air, which is necessary to improve the ventilation and cooling of the engine. Also present were two pairs of windows in the sides and aft doors. It is possible that there were seats for engineers in the van who were monitoring the operation of the gas-electric unit.

A relatively simple design of the experimental machine was developed in the shortest possible time, and 25 June 1964 of the year the workers of the Plant them. Likhachev began assembling a prototype model. The main units of the machine were made by the enterprise ZIL, and the elements of electrical equipment came from the plant number XXUMX. The widest use of finished components has a positive impact on the timing of the work. Already 476 of July of the same year, an experienced ZIL-20E went to the test and development base of the Plant them. Likhachev near the village of Chulkovo in Ramensky district of Moscow region. There it was planned to conduct the necessary tests and establish the real characteristics of the prototype.

Unfortunately, most of the information about testing a prototype sample ZIL-157E is unknown. The results of this “auxiliary” project were lost against the background of the main program ZIL-135E. Nevertheless, some data on the checks of the first truck with electric transmission are preserved, while others can be established on individual facts.

From the available information it follows that the tests ZIL-157E on different routes and in different conditions lasted for several months. There is reason to believe that the car was checked on highways and dirt roads, as well as on off-road of various kinds. With the onset of cold weather, the prototype was tested on virgin snow. Thus, the chassis on the basis of the motor-wheels, which received energy from the gas-electric power unit, showed all its characteristics and capabilities in a variety of conditions. 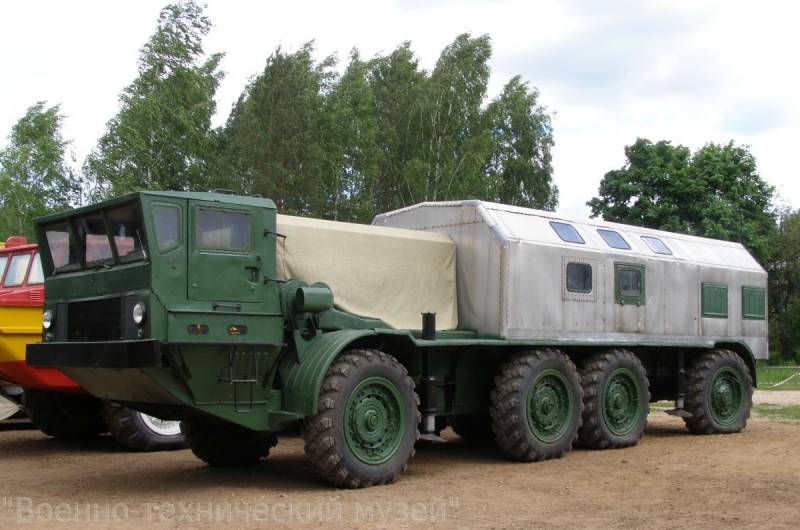 Prototype sample ZIL-135E, built on the basis of developments on the topic ZIL-157E

According to reports, the electric ship with the unofficial name ZIL-157E during tests showed itself not in the best way. Were identified design flaws that interfere with the normal operation of equipment. In addition, some features of the existing machine could interfere with obtaining the desired characteristics and capabilities.

Subsequent events show that the very idea of ​​an electric transmission has justified itself. In addition, the combination of the ZIL-375 gasoline engine, the GET-120 generator and the DT-22 traction motors well-proven. These units, already tested in previous projects, confirmed their characteristics and were soon used in the construction of new machines. At the same time, however, there could be problems with the used wheeled chassis. The three-axle chassis of the serial truck, which received the wheel formula 6х4, simply could not realize the full potential of the electric transmission. The two rear drive axles could not cope with the tasks assigned to them, and there was no drive for the front wheels. Incomplete drive in a certain way reduced the mobility and patency of the prototype on rough terrain.

However, accurate information about the test results of ZIL-157E in the context of technology and characteristics are not available. Most of the available sources indicate only that the mockup “did not meet expectations” - without any clarification. It is easy to see that, with its technical appearance, this car really could not show characteristics at the level of the serial ZIL-135 all-terrain vehicles with a traditional power plant and mechanical transmission.

No later than the first months of 1965, the designers of the Special Design Bureau of the Plant. Likhachev analyzed the data collected during recent tests, which allowed them to continue to develop a full-fledged all-terrain vehicle. Probably, some of the results of the ZIL-157E tests influenced certain features of the technical appearance of the future ZIL-135E. In this part of the already defined features of this machine could remain unchanged.

Over the next few months, SKB ZIL in cooperation with Plant No. XXUMX worked on the further development of the existing electric transmission. A new result of work in this direction was the mockup sample ZIL-476E. Subsequently, on the basis of proven ideas and solutions, they created another all-terrain vehicle with electric units, distinguished by even higher mobility and maneuverability.

Having passed the necessary tests, the prototype with the unofficial name ZIL-157E was no longer needed by its creators. His fate is unknown, but it can be assumed that the car was rebuilt according to one of the existing or promising projects. An experienced electric ship could have been made a prototype under the new project or returned to it the original configuration of the truck. Anyway, the model all-terrain vehicle at a certain point ceased to exist.

The task of the auxiliary project ZIL-157E was to test some of the ideas and solutions proposed for use in the development of a full-fledged ultra-high-traffic machine. During the tests, the built prototype showed both advantages and disadvantages of its design. It allowed collecting the necessary data and improving the main project already being developed. Despite its secondary role and not the most outstanding test results, the electric ZIL-157E influenced further work and completely coped with the tasks assigned to it.