Advertising - the engine of commerce, or bezrybe and cancer fish

February 13 2018
33
The great and mighty American fleet is in a panic. Russian submarines scare American sailors so much that navy command decided to fight with them to create an unmanned ship. 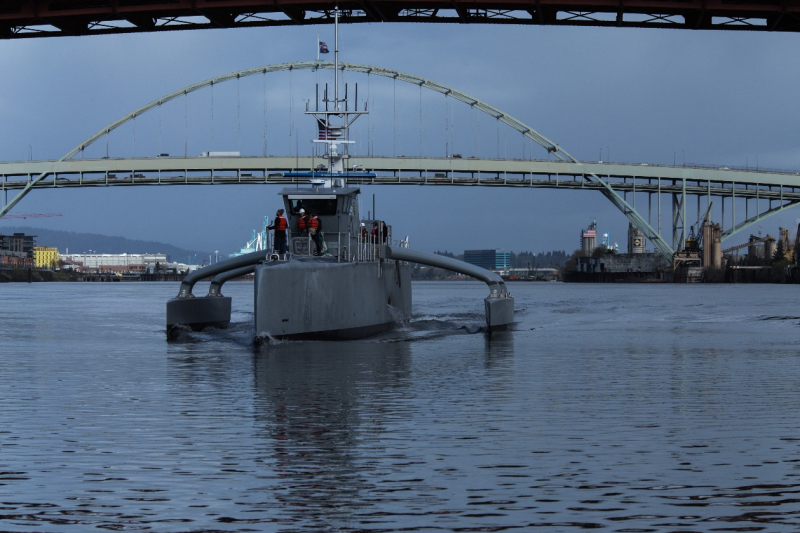 The ship, which can be controlled at a distance and thereby exclude the probability of the influence of the human factor with active opposition. More precisely, if you believe the American edition of The National Interest, the ship-robot, capable in the future to work completely autonomously, without human intervention.

In principle, it is quite possible to create such a ship. In the American edition we are talking about the "sea hunter". The ship is fully automated, operating in offline search mode, while under the control of operators. The length, according to US sources, is about 40 meters. Displacement 145 tons. Sailing distance to 10000 miles. Travel speed to 27 nodes.

In general, the creation of ships that could ensure the safety of larger ships is a really relevant topic. The same sea hunters, if shipbuilders fulfill all customer requirements, will be able to track modern submarines quite successfully. And do it off the coast of any country.

At the same time, such ships are cheap enough to operate. The modern destroyer of the United States, again according to the Americans, costs the taxpayers 700 thousands of dollars a day. The unmanned "sea hunter" will cost only 15-20 thousands per day.

The main headache of Americans today is not only our "black holes", but also the fast-growing submarine fleet of China. The time when the Chinese submarine fleet could be treated with humor passed. The Chinese have played with pleasure the role of the "industrial zone" for the USA and now possess an excellent industry and sufficiently qualified scientific personnel.

Keeping autonomous ships in the Black Sea is stupid. Even with the use of Turkish ports, such ships will be destroyed in the early hours of the conflict. But off the eastern coast of Eurasia, these ships are very useful. Controlling the seas in this region is becoming increasingly difficult.

In case of danger, they will be able to quickly leave the zone of shelling in the Japanese or South Korean ports. And at the same time, having a sufficiently small draft, submarines will be tracked even at shallow depths. Where the destroyers do not work.

By the way, according to the plans of the People's Republic of China, by the year 2030 there will be up to 75 modern diesel-electric submarines in this region. It is doubtful that these new boats will be inferior to the Russian or American. And the presence of serious weapons actually blocks the use of AUG.

Last year, the US Navy ordered only one such ship. However, this year the order will be increased. How much is not yet clear. Most likely, everything will depend on the practical results of the use of a drone.

And what about the main competitors of the Americans? It is by the actions of competitors that one can often judge the prospects of the proposed projects. It is clear that the emergence of data on some new developments, encourages engineers and designers to search in a given direction.

We do not have information about Chinese unmanned surface ships. About the creation of a mini submarine is. Exactly the same information is about Russian projects. In particular, on the mini-boats "Piranha" reported many publications. It is doubtful that both we and the Chinese ignored promising and cheap development.

So why is the American fleet paying so much attention to these robots? Did the idea of ​​world domination so captured the American admirals that they could no longer see the rest? Or vice versa, are admirals so promising?

Neither one nor the other. The matter is much more prosaic. Robotic ships will be engaged in what the hydrophones of the SOSUS system have been doing up to now. It was this system with the use of a multitude of hydrophones that for a long time made it possible more or less to track the vessels of a probable enemy near the borders of its own territorial waters.

Modern boats, alas, this system turned out to be too tough. Currently, most hydrophones are conserved. Therefore, the ships will continue to cruise along the shores of the United States in the hope of catching boats.

Experts talk about the terrible Russian "Varshavyanka" and similar Chinese submarines. However, I mentioned Piranha a little higher. And for good reason. Most likely, a robot ship will not be able to catch mini-boats. Although it will be known after the end of the test.

Yes, and already known boats will be able to successfully leave this hunter with a nose. Hearing this "rumbling from under the arms" acoustics can be much earlier than the hunter hears "game." Again, hope for super modern equipment? Which will be ...

Information about the new ship to the public was provided by a fairly serious resource, The National Interest. It was the analysts from this publication who spoke about the new robot ship as ideal weapons against Russian diesel-electric submarines. But a simple question arises: is there an ideal weapon?

So far, we can only say that the American fleet purchased a new ship for 25 million dollars. The ship is interesting. But will he be able to complete the tasks assigned to him while the question is.