The 2 liquid fuel rocket with a range of thousands of kilometers was presented to the public during events marking the 39 anniversary of the Islamic Revolution in Tehran. The missile can be equipped with a split head for defeating various targets. Rocket launch is possible both from a mobile launcher and from a launch shaft. The rocket is equipped with a system that allows you to hide its movement from the radar. 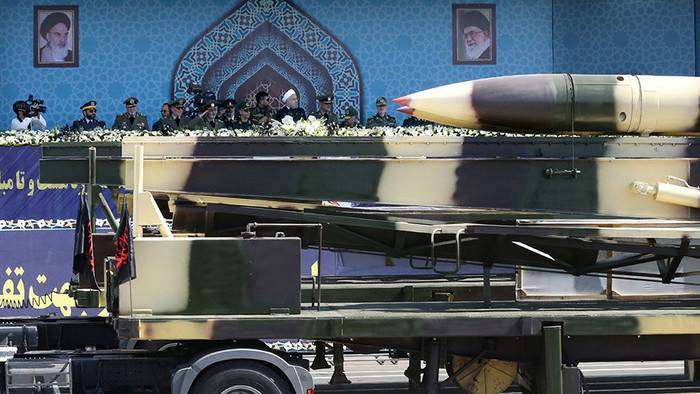 The Fajr-5 was also introduced - a rocket made by the Iranian military to hit short-range targets.
- it is told in the message. In addition, the Tufan-2M anti-tank guided missile and the Iranian Fateh class submarine, which is undergoing final tests before entering service, were demonstrated.

Presentation of new weapons took place against the backdrop of Iran’s conflict with Israel, which escalated on the eve of February 10. The latter intercepted an Iranian drone launched from the territory of Syria on the night of February 10 and considered it an invasion of its territory. After which the Israeli military attacked the "Iranian targets in Syria" - the "control systems" of the UAV.

Ctrl Enter
Noticed oshЫbku Highlight text and press. Ctrl + Enter
We are
Syria launched dozens of ballistic missiles, so that they did not get the rebels
Military Reviewin Yandex News
Military Reviewin Google News
50 comments
Information
Dear reader, to leave comments on the publication, you must sign in.