February 13 2018
330
The election campaign in Russia has begun. Applicants for the post of new president of the country are identified. Central Executive Committee prints newsletters. Candidates dispersed around the country in search of new supporters. Journalists began to dig news for or against Activated and various fake comets. Nothing new. Quite expected events. 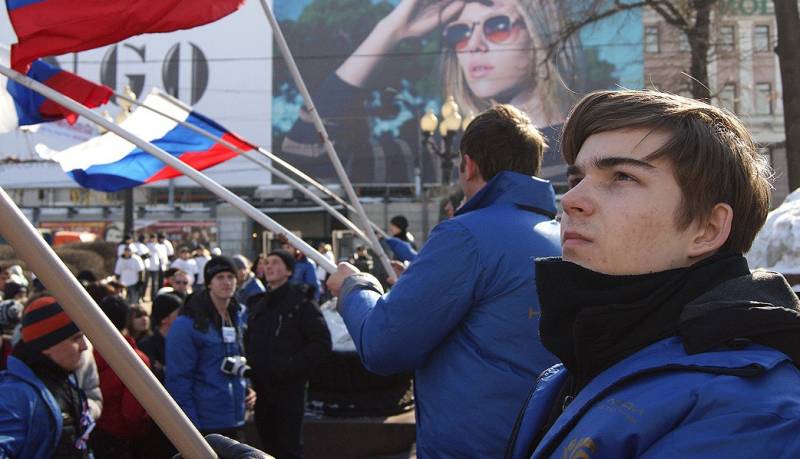 In principle, writing on topics that are heard today, but which is not confirmed, is advantageous today. The consumer today can find any "information" confirming his point of view. Even the most idiotic.

And all this is wrapped in beautiful wrapping and objectivity of opinion. But the most disgusting, no one even wants to understand this colossus of various opinions, fakes, truthful information. Why, if tomorrow will be another avalanche?

It so happened that I had to spend some time in the company of young people. Those who today perceive themselves as the future of Russia. Youth, 30 plus or minus 5.

After the day's "sports feats" our company gathered in a large hall. Someone danced, someone shared his impressions with friends on the Internet. But most just talked. About life, about prospects, about the upcoming elections, about the feat of Major Filipov. Impressions are quite curious.

The first thing that shocked me was the attitude of a certain part of the interlocutors to the death of Roman Filipov. Why did a Russian guy die in Syria? Why are our boys and girls there at all? The hero can only be the one who defends his own country ...

And this at a time when the media competed in covering the feat of the Russian pilot. When in most cities of Russia people carried flowers to monuments, to the Ministry of Defense, to the school where the hero was studying. Strange, yes?

It seems to me that we, as a nation, "stepped on the old rake." Any war, if it becomes protracted, becomes painful for the population. Therefore, the losses are perceived stronger, more emotional. There is a feeling of annoyance.

Thanks to the rest of the guys. Sieged liberal truth-seekers. Settled hard enough. Only now I had to answer their questions. As a representative of the older generation. And the questions were interesting.

We spent a lot of time thinking about our education system. Understand the nuances, the pros and cons, in the overall structure of education in the country. It was all right. Exactly. Only, as it turned out, this is not all.

I, as a representative of the Soviet Union ... I, who did not defend this very Union, answered modern Russia ... These are the youngest businessmen, students, employees. And the questions were really serious.

Do you know what I understood most of all during this interrogation conversation? The tragedy of our time lies in the fact that those real Soviet, our grandmothers and grandfathers have already left, and we failed to replace them. We are busy making money, basic survival, did not become a source of answers to the questions of our children.

The state, represented by educational institutions and other children's organizations, does not consider education at all as a system of education. As it was in our time. Our children grew up in a vacuum. They are smart, but they have no core.

That is why we have so many young people who we do not understand today. The vacuum is quickly filled. And it is not always filled with what we would like. Hence the questions about Filipov. Questions about government and elections. And this is a tragedy for the country.

On the other hand, my interlocutors are quite successful young people. Either have already realized their own dreams, or going in this direction. This is not a lost generation. Not parasites or completely apolitical people.

Later, after our conversation, I thought about my own fault in the created situation. About the fault of our generation. And, it seems, found the answer. Or blame. I do not claim that this is the answer to all questions. It is rather the answer to your own question.

The fact is that we, the global ones, simply do not know what kind of person we want to see in our children and grandchildren. We are talking about patriotism, honesty, about some other qualities. And specifically not talking about anything. We do not have clear criteria for the modern Russian.

We demand from youth what is important to us today. Yesterday it was important to us more. And they demanded it differently. Tomorrow will be the third ... So who do we have to "sculpt"? Who should educate kindergartens, schools, colleges and universities? Where is the ideal to strive for?

I admit, I deliberately went to the provocation. I asked a direct question. If tomorrow the war and you bring the agenda, go to war? Of a dozen young people wondered alone. The rest just said yes. Upbringing? I do not know, rather an innate sense of shame. I can not be worse than others. I should. Nice damn it.

But another topic about the election, made me think. Do not believe young people in the coming changes. Everything will be as usual. Officials and those close to them will live. The rest survive. And the elections themselves are just a formality. Nobody needed, and even stupid. Waste of money.

Given the radicalism of youth, refer to this opinion is necessary with some skepticism. They understand the importance of elections. Just can not yet properly formulate their own requests. I will try to formulate me.

So, Russia today lives the way Putin wants. More precisely, as President Putin will say. The rest, even at the highest level, are nothing more than "martinet" who beautifully "click heels" and say "is." Hence the prospects. The old president is the old country's course.

But more interesting. It is necessary to shift the emphasis of the struggle for a better life into places. Stop tolerating the local princes. Moscow is far away and can’t know all the local problems. The Kremlin knows only what the local authorities report.

Ways to change the local elites can be any. From elections to prosecution or violent overthrow. Simply put, young people talk about revolution. Only locally.

The direct question about the president also has an answer. He knows if the current situation, will make a revolution from above, and we are at the bottom. Here is a metamorphosis. Some third version of the revolution emerges. Or two parallel revolutions? I have not decided yet.

One thing is clear - the youth is waiting for a radical change. Young people are ready to start them.

Is it good or bad? The example of the former brothers showed that there is nothing good in such radicalism. The people, especially the people "without a rod," are able to go after the most vile leaders with the most inhuman ideas. Again "we will destroy the whole world of violence"? We need it?

What remains to us? To live as we have lived so far is impossible. Delay the reforms too. Young tigers have grown up and are ready for battle. Not later, but now. So, after the election, you need to change something.

Change in the system of government. Change attitudes towards people. Change your attitude to business. It's time to turn around to face people. Otherwise, these same people can hit hard on the place where the power is turned to them now.

Either we are reforming the country peacefully, without blood and excesses, or the country is reforming itself. But what? Will we repeat the way of the Russian Empire a hundred years ago? Or the way of Ukraine? We must think and draw conclusions. Correct conclusions!

Ctrl Enter
Noticed oshЫbku Highlight text and press. Ctrl + Enter
We are
Reports from the militia of New Russia for 27-28 September 2014 of the yearResults of the week. "They stood to death like buttons!"
Military Reviewin Yandex News
Military Reviewin Google News
330 comments
Information
Dear reader, to leave comments on the publication, you must sign in.