Project "ZZ". Putin is a superhero with a blaster that Russia will vote for

February 12 2018
193
What or who is shooting a picture "Putin fighter" from a blaster? Unknown. Another is known - the idea: Putin will save Russia. Putin cannot be changed as president just because he is Putin. It can be traced even in painting: here is Putin, who holds a portrait of Putin, and he also holds a portrait of Putin. And at the same time, as the press writes, state employees and students are forced out to rallies in support of Putin. And this speaks of the declining popularity of the “permanent” leader and the Kremlin’s concern over the result of the upcoming presidential election. 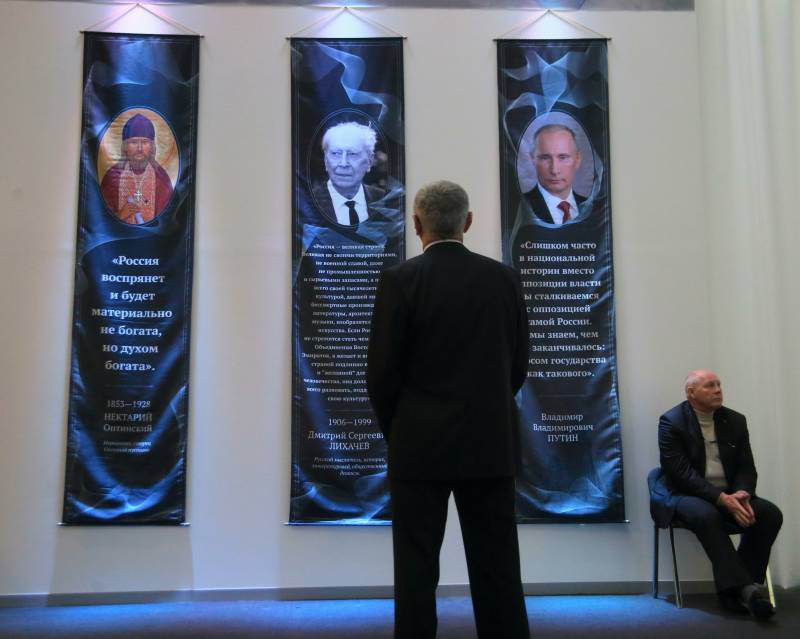 Mark Bennetts in a magazine Newsweek argues on Putin: is Putin “super” and do Russians really love him? Can they love the president, in a country where corruption is rampant, and citizens are impoverished?

“Poverty, corruption and inequality flourish in Russia. So why do so many here love Vladimir Putin? ”The journalist asked such questions.

Moscow. Art gallery in the city center. Here is a huge picture: Vladimir Putin is depicted in a superman's red cloak, he shoots from a giant weapons with the English name - "Putin Blaster". Where is he beating? Unclear. But he has a "steel look" and "dark determination" on his face. “He’s here to save us all,” Bennetts says ironically.

In the gallery, the author counted thirty portraits and sculptures of Putin. All these works exhibited in Moscow portray the former KGB man as "heroic and symbolic." Putin wins the ice hockey championship, Putin fights the leopard, Putin puts on medieval armor, Putin holds the Russian flag, Putin rides a bear. And even like this: Putin holds a portrait of Putin, who holds a portrait of Putin, and he also holds a portrait of Putin and so on, something like a Russian doll. And all this is crowned with the name of the exhibition: Super Putin. (It was no coincidence that the exhibition was opened on December 6, on the day Putin officially announced that he would run for president.)

“Vladimir Putin is a strong leader who has shown excellent results,” said the exhibition curator, 22-year-old model, an activist and journalism student Julia Dyuzheva. She believes that the Russians should be “grateful” to Putin.

Many Russians are really grateful to Putin, the author notes. For other people, especially rich people from Moscow and St. Petersburg, life "has never been better." According to Forbes magazine, the number of millionaires is growing very fast in Russia. In Moscow alone, 73 billionaire lives. Putin is also famous for the fact that he increased spending on the country's military forces, restoring some of the global influence of the Soviet Union. And this “restoration of influence” is “a source of pride for millions of people.”

Meanwhile, Bennetts continues, for a significant number of Russian people, life is "still gloomy." About 20 million people (almost 14 percent of the population) earns just 170 dollars per month. Real incomes in the country are falling for the fourth year in a row. Approximately 3000 schools in Russia do not have closed toilets, including in Siberia. Corruption costs the country annually 35 billions of dollars, according to the Moscow Institute of Economic Policy. Gaidar (and this is only the corruption that is “related to government contracts,” the author writes). In 2010, Dmitry Medvedev pointed out that the corresponding rate of corruption is 33 billion dollars, or 3% of Russia's annual gross domestic product.

Meanwhile, Putin ruthlessly cracks down on dissent, the journalist continues. He created a complex system of state propaganda, which aims to discredit potential rivals. People from Putin’s entourage, on the contrary, became rich and gained considerable power.

However, the aforementioned Dyuzheva is “indifferent to this,” Bennetts sneers. According to her, the Russian youth considers Putin to be a modern superhero. And there is no one who could rule the country right now, except Putin, insists Dyuzheva.

According to polls published by both state and independent sociological centers, her admiration for Putin is shared by the majority of the people: over 80% of Russians say they approve of Putin’s actions as president. This rating has remained virtually unchanged since the “Kremlin annexation of Crimea in Ukraine in 2014,” the correspondent writes. The accession of the Crimea, many support.

Paradoxically, however, but many Russians, almost 50 percent, say that the country is moving in the wrong direction! This is the data of the independent Levada Center, the author indicates. What explains this cognitive dissonance? The question is answered by analysts. They remind that, even though Putin is the head of state, many Russians do not associate state failures with him. It is believed that Putin is associated with what is good, albeit intangible. As for the tangible (and bad) factors (wages, incomes, etc.), the arrows are transferred to the government, governors, mayors, etc., and Putin is not mentioned. That is why it is customary in the country to address Putin for all the problems, and to “you” —as as a king or a god. The latest video with an appeal to Putin was published by desperate teachers in the Kurgan region: they asked Putin to intervene in the situation with non-payment of salaries. But even these teachers do not want to blame Putin for their troubles: they also see Putin as the good tsar-father.

And television propaganda constantly reinforces this image of the “father,” a sort of parent of the nation, who will quickly solve any problems of the Russian people. Putin makes suggestions to officials, Putin instructs them to repair housing or carry gas to a remote area. Putin even handed the dress to a little girl from a poor family and invited her to the Kremlin for a visit.

In 2014, the speaker of the Russian parliament, Vyacheslav Volodin, even said: "Today there is no Russia, if there is no Putin."

Unlike Western countries, where politicians are ordinary people, for millions of Russians, Putin is the “breathing embodiment of the country.” One “Russian celebrity” (the name is hidden at her request) told Bennetts that Putin “didn’t like her that much,” and so did his party. But this “celebrity” never even thought of criticizing Putin or his “United Russia”, because she (“celebrity”) is a “patriot”.

The journalist also points out that those who dare to criticize Putin can be called "traitors to the country." Putin’s criticism is perceived as “offensive”.

The personality cult of Putin is growing throughout the country. There are Putin's paintings, portraits of Putin, there are even statues of Putin, including a bronze bust near St. Petersburg, depicting the Russian president as ... the Roman emperor. These are all manifestations of the personality cult.

According to Sam Green, director of the Russian Institute at King’s College London, this personality cult is a symptom of a lack of institutions in the country that could compete with Putin in the struggle for power. “Parliament, the courts, the constitution, even the church,” the expert said, “were turned by the authorities into the service of one arbitrator, one guarantor and one symbol.”

Shadow advisers have shaped Putin’s image. It is based on the myth that Putin decides everything, that there is no alternative to Putin, reminds Gleb Pavlovsky. And just as before, citizens knew that the Soviet Union is the state of Lenin, today for the majority of Russians, Russia is the state of Putin.

Numerous investigations conducted by opposition journalists, the author continues, showed that the Kremlin is trying to get the Russians to attend "voluntarily" at rallies in support of the president. Similarly, the Kremlin is putting pressure on government officials or students in order to increase turnout at the polls. One thing to another is connected: high voter turnout should be combined with high voter turnout for the glory of Putin.

What would attendance look like if the authorities didn't force people to go to pro-Putin rallies? Opposition activists in Tyumen found out this last year. December 31, acting as "Kremlin supporters", they organized a rally in support of the fourth presidential term for Putin. The event was advertised in local media and online and was held on a non-working day in the very center of the city. Attendance, speak? Seven people!

And the Russians will undoubtedly choose such Putin anyway for president. 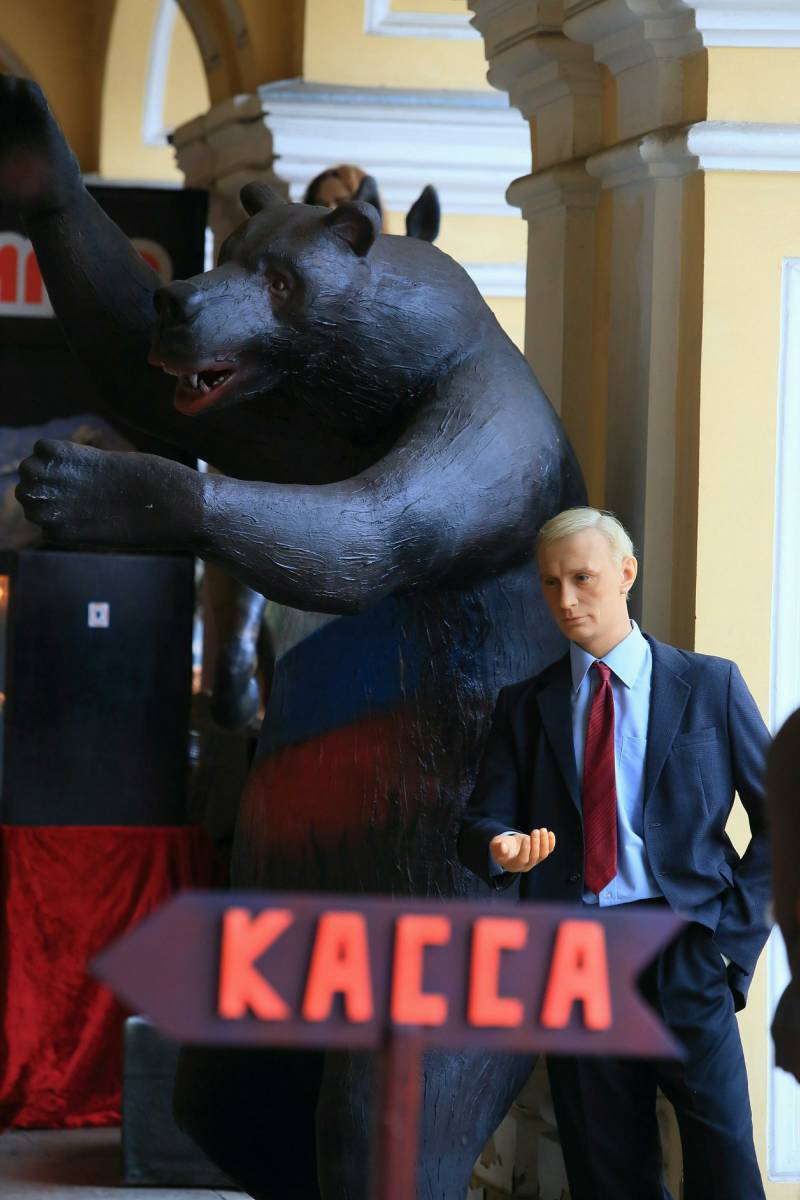 Why erfolglos? Answer: the economy in Russia is stagnant, the people’s wages are falling, the poor are growing.

Why populär? Because, on the eighteenth of March, the Russians will still choose Putin as their president.

Julian Hans, like Bennetts, indicates that the state, as in Soviet times on 1 on May and on the anniversary of the revolution, “sends” citizens to demonstrations.

And what else is there to do Putin, who erfolglos? He does not have a vision for the future: the people are getting poorer, and Putin promises the same thing year after year: raising wages, pensions, improving health care, refusing the country from oil and gas dependence. But how could Putin realize all this for eighteen years of power? Not. It is unlikely that he will succeed even now, Hans believes.

The election campaign looks tense and formalized for a reason. What foreigners saw in Russia is largely true. The ruble is really attached to oil: it falls if oil becomes cheaper, and rises if oil becomes more expensive. The raw material dependence of the budget on trade in raw materials is still high. We cannot speak about any breakthroughs of Russia in technology and in “import substitution”. However, who knows: maybe Mr. Chubais will soon gild the whole country with a great nano-science!

Approximately 22 million people (about 15% of all residents of Russia) live on incomes below the subsistence minimum. Over 5 years, the number of poor people has grown by 7 million people. In addition, every third citizen barely makes ends meet. And President Putin seems to understand this. In an interview with NBC last year, the Russian president said that the situation with poverty was worse than "we planned": “We have a lot of problems, and even the poverty threshold has now become a little worse than we planned.”

According to the Audit Chamber of the Russian Federation, real disposable incomes of Russian citizens for January — October are 2017. fell by 1,3% compared with the corresponding period a year earlier.

Russians who are ready to vote again for Putin should not have forgotten about this. Das Verständnis ist hilfreich, as the inhabitants of that country, which is considered the locomotive of Europe, say. Understanding is helpful!

Ctrl Enter
Noticed oshЫbku Highlight text and press. Ctrl + Enter
We are
The tragedy of the American army ("The Atlantic", USA)Situational analysis of the death of the MH17 flight (Malaysian Boeing 777), made on the basis of engineering analysis from 15.08.2014
Military Reviewin Yandex News
Military Reviewin Google News
193 comments
Information
Dear reader, to leave comments on the publication, you must sign in.