As Vyatrovich won the memory of communism in Ukraine

February 12 2018
15
The director of the Ukrainian Institute of National Memory, Vladimir Vyatrovich, in the “Saturday Interview” program on Radio Liberty, said that de-communization had actually been completed in Ukraine. “In the context of getting rid of the symbols of the totalitarian regime, there was a renaming of settlements - about a thousand. This is almost everything, ”- reported on the work done on the radio station, funded by the US Congress, the main de-communizer of Ukraine. 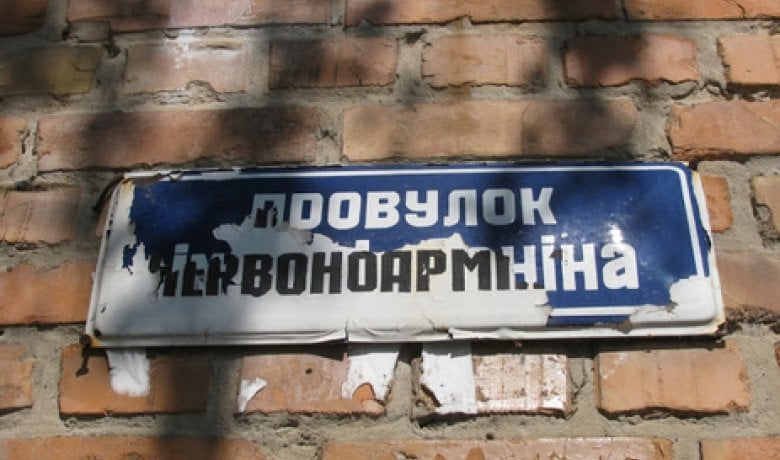 In the new Ukrainian century - with the Horish Plains

Vyatrovich plentifully supported his conclusion with new figures: in Ukraine, 52 thousands of streets were renamed, thousands of monuments to Lenin and other communist leaders were demolished around 2,5. The scandalous historian could not resist the criticism of the current authorities. He “with regret,” noted that “unfortunately, strangely enough, in Kiev the final renaming of the streets to be de-communized”.

The Ukrainian capital lags behind the “progressive Ukraine” and in terms of the demolition of monuments. Vyatrovich is waiting for the monument to Nikolai Shchors to be demolished in Kiev, the Soviet coat of arms removed from the shield of the Motherland and the sculptural group under the Arch of Peoples Friendship. In addition, the country still has about ten settlements with "non-obvious communist names, which, nevertheless, fall under the law on de-communization."

This law was postmaid by the Verkhovna Rada adopted in spring 2015 of the year. By that time, in Ukraine, for a long time already (since December 2013), local nationalists mocked (“Leninopad”) over monuments of prominent figures of the Soviet government or simply honored people of that historical time.

They smashed objectionable monuments with sledgehammers, demolished them with bulldozers, dropped them from pedestals on cables using heavy equipment. Power, in fact, retroactively only legalized this historical barbarism. Gave him a certain systemicity in the form of official state policy.

Since then, Ukraine regularly reported on de-communization, published relevant releases and summaries, as their communist predecessors did earlier, informing the population about the progress of agricultural campaigns or the implementation of five-year national economic plans.

It cannot be said that Ukrainians meekly supported this barbaric state policy. The most serious resistance arose when renaming settlements. However, he was quickly broken. This is how it was, for example, in Kirovograd. Here, 56,9% of residents were in favor of preserving the name of the city, 30,6% expressed a desire to return the old name of the city - Elisavetgrad.

They were not heard. Under Ukrainian law, renaming settlements is included in the competence of the Verkhovna Rada. There, the public, introduced by Maidan to the highest legislative power of the country, was filled with creativity and offered seven names already - Elisavetgrad, Ingulsk, Zlatopol, Exampéy, Kropyvnytskyi, Kozatsky, Blagomir.

In the end, the deputies chose the name of Mark Kropivnitsky - the famous Ukrainian playwright and theatrical figure of tsarist time. In favor of Kropyvnytsky, he conceived his gentry origin (a nod to the neighboring Poland, which was then revered by the Kiev political figure) and that the playwright wrote his plays exclusively in Ukrainian.

The opinion of the residents of the city turned out to be the last one that interested the deputies (230 people voted in favor) when renaming Kirovograd to Kropivnitsky. Dnepropetrovsk also became the Dnepr, Illichivsk - the Black Sea, and the former Komsomolsk - the Horish Plains.

That same story happened to the Fins. Residents of Komsomolsk appealed to the central authorities with a request not to rename their city and collected under the appeal 20 thousand signatures. But they were not even answered. Then the deputies of the State Council at their session proposed a new interpretation of the name of the city - “The Collective of Young Socially Motivated People Spravnich Kozakiv”.

However, the true (Spravzhnik) Cossacks were nevertheless relocated to the Horishnie (Upper) Floods. In total, as we remember from the report of Vyatrovich on Radio Liberty, the new names received about a thousand settlements. Each of them has its own dramatic renaming history.

Vyatrovich’s current report was not the first in a series of reports on the completion of decommunization. Under various variations (“basically completed”, “key issues resolved”), it was already reported by the heads of the presidential administration, the government and the parliament. The speaker of the Verkhovna Rada of Ukraine, Andrei Paruby, even expressed himself in the sense that for the residents of the newly-named cities and towns, renaming itself became a “great holiday.”

It is worth noting that this “holiday” is for many years. Experts point out that the pace of renaming and, accordingly, changing the actual addresses of residence is significantly lagging behind the process of re-registering property rights by citizens of Ukraine, re-registering vehicles, renewing service contracts, etc., caused by the change of their street names and settlements.

Ukrainians will have to live with this problem for many more years. Especially because, contrary to Vyatrovich’s victorious report, it was not at all an itch to rename. In late January, for example, the SICH human rights group registered a petition to rename the Dnipropetrovsk region to Sicheslavskaya.

Not the fact that "WBC" will get the area of ​​the same name. But the authorities, of course, will hear her arguing that it is necessary to get rid of all memory "of Grigory Petrovsky - one of the organizers of the Holodomor and the main leader of the totalitarian communist regime in Ukraine."

On everything goes, Vyatrovich hurried with his report. Moreover, de-communization in Ukraine is interpreted much more widely than renaming local toponyms or demolishing monuments that irritate Ukrainian nationalists. Three years ago, the Verkhovna Rada adopted a package of four laws on this topic.

They criminalized the denial of the "crimes of the communist totalitarian regime," for the public expression of communist views. For example, for the collective execution of the "Internationale", which until the 1944 of the year was the anthem of the Soviet Union, it is possible for 5-10 years to lose their freedom with or without confiscation of property.

In accordance with the laws on de-communization in Ukraine, they opened the archives of the “repressive organs of the communist totalitarian regime of 1917 — 1991”, gave “a new historical assessment of the victory in World War II 1939 — 1945”. Finally, the legal status of “fighters for the independence of Ukraine in the 20th century” was raised to heaven.

The laws were so odious that the then chairman of the Verkhovna Rada, Volodymyr Groysman, did not dare to sign them for almost a month. About the same they lay in the presidential administration of Petro Poroshenko. Under pressure from the nationalists, the authorities retreated and gave the green light to the entire package of laws on decommunization. Over time, their use became part of the behavioral norm in Ukraine.

Depending on the general culture and ideological preferences, these laws can now be very widely interpreted. The most vivid example of this is the introduction in the spring of 2017 of the year a ban on "public use, demonstration, carrying, and also the distribution of the St. George ribbon or its image."

Now in Ukraine, the use of St. George's ribbon is punishable by a fine from 850 to 2550 hryvnia. In this case, both the tape itself and objects with its image are subject to confiscation. For repeated violations during the year of this norm of the law, the fine rises to 5 thousands of hryvnia, but you can get 15 days of administrative arrest.

And this is clearly not the latest innovation post-power. Vyatrovich and his ilk still have where to show their vandal inclinations. It is not by chance that in the “Saturday Interview” a monument to Nikolay Shchors in Kiev was mentioned. This red commander strongly guilty before the current Kiev regime.

First, Shchors fought a civil war against the Galician army of the West Ukrainian People's Republic. Secondly, he did not support the Grigoriev revolt against the Soviet power in Ukraine in May 1919. Therefore, the memory of Shchors was already well cleaned. The town of Shchors in the Chernihiv region was renamed Snovsk. Changed the names of the villages Shchorsovo in Nikolaev and Odessa regions, Shchorsovki - in Zhytomyr, Poltava and Kherson.

Now Vyatrovich has a corn from his eyes a monument to the legendary division commander. It means that the new report of the Ukrainian de-communizer on the “final and irrevocable” solution of the issue is not far off. Only the end of this is not visible, while the current regime is alive, parasitizing on the division of the nation. Today, this regime is quite satisfied with the scandalous initiatives of the Director of the Ukrainian Institute of National Memory and his followers.

Ctrl Enter
Noticed oshЫbku Highlight text and press. Ctrl + Enter
We are
Reports from the militia of New Russia for 27-28 September 2014 of the yearResults of the week. "Either true or all is well"
Military Reviewin Yandex News
Military Reviewin Google News
15 comments
Information
Dear reader, to leave comments on the publication, you must sign in.