February 12 2018
35
When you look at the post factum, from a certain distance, to the unexpected visit to Washington of the heads of the three most important Russian special services: Sergey Naryshkin (SVR), Alexander Bortnikov (FSB) and Igor Korobov (GRU) to meet with CIA Director Mike Pompeo, you understand that many hot on the heels of assumptions are unfounded, only two sides of this triple visit are important. Namely: the level of the visit and the deliberate openness of the arrival of the heads of special services in Washington, using scheduled passenger planes. 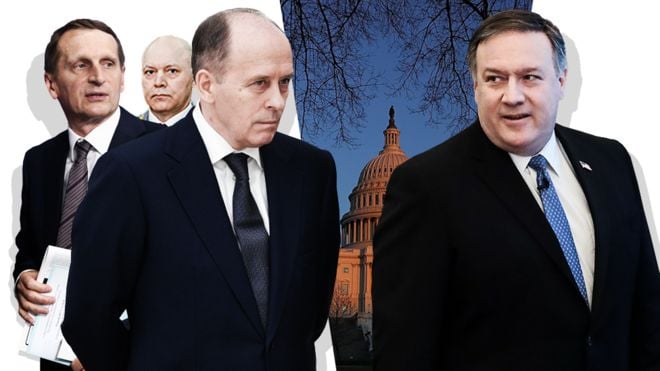 Most likely, Moscow insisted on such an open visit to Washington by the “main Russian spies”, as the American media say. It is no accident ambassador Anatoly Antonov, and made him public. It was obviously not profitable for President Donald Trump; he had to suspend sanctions, be substituted for blows in the press. And indeed, he got the "nuts" in the press and in Congress.

Trump, and the American side in general, to discuss any problems, from the situation in Syria and Afghanistan to Ukraine, the “Kremlin list” and the fight against world terror — anywhere, did not need to meet with the Russian special services in Washington, informing the whole world about it . These problems could be discussed with the same or other persons somewhere in Bermuda, or some US aircraft carrier, in the presence of our nuclear submarine, there were precedents for such negotiations, not one media would have known about it.

Sergey Naryshkin made a brief comment on this visit, said that he was in Washington in connection with his professional activities. That is, for some specific cases of American, Western and Russian special services. What could it be?

Bandera resumption of the war in the Donbas during the Russian elections? This is an important reason for Putin, but not for Trump, in which case the tripartite meeting would have been held not in Washington, and without noise and dust. If Putin is interested in the smooth holding of elections, then Trump hardly has any business with our elections; on the other hand, he cannot guarantee anything about them, since he does not control Congress and half of his special services. The congress will work to undermine our elections anyway, but it has no chance, and Trump and Putin know it. Although, Congress may give us trouble, even to the escalation in the Donbas and the refusal to recognize the legitimacy of the election of the Russian president.

Discussion of the sanctions "Kremlin list"? This is not the field of intelligence, although the CIA could participate in its preparation. The Kremlin list was compiled by the US Treasury, so it’s ridiculous to discuss it with the Russian Foreign Intelligence Service, it’s logical to invite Elvira Nabiullina from the Central Bank or some other of our financiers, bankers, or "oligarchs" to discuss it.

Another important question: who needed this triple visit more? Obviously, Trump, because he suspended the sanctions against the heads of our special services, despite the reputational losses. But Vladimir Putin was also interested in this visit, which is why he was at such a high level, and generally took place. At the same time, Moscow insisted on the meeting place in Washington, on, practically, the official status of this delegation, fixed by the lifting of sanctions. Perhaps it was a kind of Washington’s guarantee to Moscow that its high representatives would not be victims of CIA provocations.

What remains in the "dry residue"? It remains the case of Trump himself about his "conspiracy with the Russians", which the Congress continues to promote. Trump is interested in absolving these absurd accusations; Putin is interested in this indirectly, as the main defendant in the Trump recruitment case.

Both Trump and Putin, independently of each other, have long insisted that the “Russian affair” was fabricated. Recently, Trump was able to take revenge on his secret services, as a result of which Congressman Devin Nunes, the chairman of the intelligence commission, prepared a report in which he accused the Democratic Party and Hillary Clinton of plotting against Trump with the assistance of the special services, namely the FBI, and the Justice Ministry.

The conspirators used the methods of work and the capabilities of the special services of the United States and even Great Britain. Then it is logical that Trump invites our special services to consult on this special issue, possibly on the subject of evidence that Russia was not involved in this scam, and to receive some materials, for example, English MI-6 agent Christopher Steele, who once worked in Moscow, and then composed on the order of the Democratic Party of dirt on Trump.

The file of Christopher Steele was a key moment in Trump’s compromise; he was launched by John McCain himself, to whom it accidentally hit the table. What did Christopher actually do in Moscow? - This question may be the subject of discussion of our special services and the CIA.

However, the Trump affair does not fully explain such a high level of the visit of our special services: the issues connected with it could be solved at lower levels, and, again, not in Washington. It may be that this occasion is only a cover. There is one more reason to talk about. After hysterics with the delirium of Congress about Trump’s “Russian conspiracy,” interference with the election of unknown “Russian hackers” who are believed to have taken place in the United States, according to which American media propaganda achieved public consensus through media propaganda, US President Donald Trump is discredited. This fact can have enormous consequences. For example…

Trump can be destroyed by one careless word of Putin, or supposedly a word from Putin: yes, Trump is my agent. Then you can repeat hundreds of times that it was a joke, but the Congress will still break Trump into dozens of small tramp.

Already known "unknown Russian hackers" can get a "document from Putin", which will include words like "Trump on the hook" or "how great that we held Trump to the presidency." It does not matter at all whether it was in reality or not. Congress will explode from such a "leak" and the worst political crisis in the United States with unpredictable consequences is guaranteed! It is only necessary that this “leakage” be prepared at the proper level, and this is just a question for the special services.

The problem is that the US Congress has become a collective hysteric, obsessed with delusional visions of "Russian intervention", which have spread from the USA to Mexico, Germany, France and beyond. This tantrum makes Congress very vulnerable to playing with it any sufficiently qualified individuals, from ISIS to some brilliant madman.

Any psychotherapist will tell you that it is easy to manipulate a tantrum, to get the reaction you need from him, throwing appropriate “leaks” to him. The US Congress has today become an ideal target for manipulation, something that the creators of "controlled chaos" like George Soros and the same John McCain, who has thrown Congress against Christopher Steele on Trump, are already using. There are many options, and in addition to the "reckless word of Putin."

For example, hacker “leaks” about some kind of super-weapon of Russia or China, about catastrophic natural phenomena or technological disasters, even the invasion of aliens and contact with Putin. Hysterics believe in any nonsense, you just need to submit it correctly. In general, the so-called “hacker revelations”, by themselves, are already super-weapons.

When the main face of a country — the president of the United States — is discredited, he cannot effectively respond to such political manipulations because of a loss of trust. Therefore, it does not matter if there is compromising material on Trump, or there is none: the hysteria of Congress makes it possible to appear at any moment. At any time, information may emerge from "unknown hackers" that Putin does have compromising materials on Trump. This may be the reason for such an open, high level of the threefold visit of the SVR - FSB - GRU to the CIA, as well as a certain signal to someone personally, maybe to John McCain and his friends?

Ctrl Enter
Noticed oshЫbku Highlight text and press. Ctrl + Enter
We are
Trump is ours againAssange: in the United States is a war against freedom of speech
Military Reviewin Yandex News
Military Reviewin Google News
35 comments
Information
Dear reader, to leave comments on the publication, you must sign in.