Year 2008. Russian Federation. The number of universities and their branches is at least 3,1 thousand. The population of the country at that time was 142 million people.

Fact: the population is 2 times smaller, universities with branches 5 more than once. A specialist with three diplomas of higher education - please. A prominent specialist who, with a diploma of graduation from the university with honors, fills out an application for employment with errors at the level of the average Soviet student, too, please. "We have them" - the whole army ...

The number of universities providing paid services, handing out state diplomas to the right and left, is the whole palette of modern higher education. The range of specializations is ecumenical: from bachelor of theology to masters of cosmosociogenesis. There are so many lawyers and economists that it would seem that only for one quantitative composition should our country have long ago simply smashed the courts with all sorts of WADA, IOC and other “combinators” of international format, and in terms of economic growth, it should be shown to China, India and Germany, put together.

However, something went wrong ... and in the presence of incredible thousands of specialists in these industries, the same athletes often have to hire Swiss lawyers to defend their case, and the government, in order to carry out attempts to defend interests in the World Trade Organization (WTO), - lawyers from the same country, which is practicing more than others in the introduction of sanctions measures against Russia.

The Ministry of Education and Science, I want to believe, ANALYZING the situation, decided to fight this state of affairs. The main tool of the struggle is directly related to the creation of commissions, which, traveling through cities and villages, are designed to detect shortcomings in universities, with the aim of reducing the number of such to a digestible figure. The goals are stated, of course, good - improving the quality of higher education in the country and optimizing budget expenditures. The message is approximately the following: there are not so many of those who are not covered, but these will be real universities. 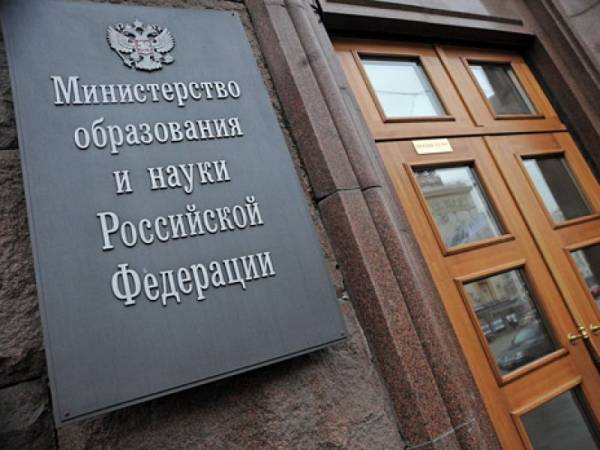 Quote (2008 of the year) from the then Minister of Education A.Fursenko:
The first must enter the 10-20 of all-Russian universities. These are universities, in a sense, brands. They form the backbone of the higher school system. The next stage is 100-150 of the backbone, powerful universities that are close to the first league. The third group of universities is designed to solve an important social function, preparing qualified specialists for the economy, while allowing people to change their status.

In general, the guillotine launched. Commission with Komsomol enthusiasm for the work undertook. Two optimization stages have already passed: from 2008 to 2014, the number of universities and branches decreased by more than one "800", from 2014 to the present - by another 1,1 thousand. And, according to official statistics, today the number of universities and their branches is in our country about 1150.

Many universities do not admit students, although in the case of private universities, this kind of information, the owners of the profitable “point” are often ignored, and websites continue to broadcast the idea of ​​“how prestigious” to study at universities - dummy, in the figurative sense of the word, the audiences of all kinds of “humanitarian economics academies” and “universities of personal growth” are mostly empty, despite the fact that there are lectures and seminars in the schedule. And who needs these lectures and seminars, as the “students” believe, if they are dumping out of their daddy's pocket for 250-300 thousands a year for tuition ... - the main thing about the diploma do not forget later. "

There is also a new manner among those who are not accustomed to saying goodbye to such a profitable business as fake higher education. When the license for educational activity is terminated, the university changes its name in a year or two, adding a new “smart” word from the “inter-ethnic” or “Eastern European” series and again submitting the documents to the regulator. Further developments may depend on how generous the server, as well as on the "through whom" filed ...

So, the fact remains: the number of universities in recent years has significantly decreased. And this seems to be normal - they themselves are not delighted with the proliferation of formal academies and universities. However, this is if the "bare" numbers. If you look into the kitchen of this process, sometimes there is a feeling that the process of “thinning” is carried out, to put it mildly, not always thought out. Or everything is thought out in such a way that it would not be desirable from the point of view of the real development of the educational system in the country.

So, against the background of statements about the need to improve the education system, decisions are suddenly made on the elimination of pedagogical universities — the very ones that are called upon to forge new pedagogical personnel in the first place. One example - a few years ago ceased to exist as an independent university pedagogical institute with almost 80-year history. Speech on the pedagogical university of the second largest city of the Voronezh region - Borisoglebsk.

The Ministry of Education and Science considered that it is quite possible to prepare teachers in the format of a branch. And the university became a branch of the Voronezh State University. It would seem that far from a bad option - the possibility of attracting faculty from a larger university, new opportunities, an expanded material base. But ... In 2017, a regular commission came up in the former BGPI (now still the Borisoglebsky branch of VSU), which decided not to accredit the educational institution by professions of pedagogical and psychological orientation.

Here is one of the announced reasons for the termination of accreditation: low citation of the faculty in scientific journals. It is clear, well, not everyone today is in the pedagogical activity of Makarenko and Sukhomlinsky, so that literally everyone has a high level of quoting ... But the system-forming pedagogical university for several dozen districts of the Voronezh, Volgograd, Saratov, and Tambov regions at the junction of four regions at once), which over the decades prepared thousands of high-class teachers, workers without exaggeration from Kaliningrad to Kamchatka, virtually destroyed. Regulator of educational activities do not like the traditional training of teachers? Looking for "unconventional"? ..

Apparently, the reformers from Rosobrnadzor have a strong belief that when closing the same pedagogical universities in the Russian province, graduates of universities in Moscow, St. Petersburg and other large cities will certainly go there. Raise, so to speak, the ignorant ... Well, yes, yes, yes ...

And then, after all, the question arises: why is this Russian province emptying, and the residents are pulling for bigger cities to earn money? I remember Sobyaninsky about the "extra people" who could be introduced into the metropolitan economy.

In general, from extreme to extreme. Universities without history, traditions and a realistic educational program (when considering the situation of the Ministry of Education and Science through fingers) breed like rabbits, then suddenly the Ministry of Trade declares “military actions”, so much so that, together with the fake empty universities, they sometimes kill -this huge contribution to the economy and culture of the country. With the water and throw out the baby? Or does the main regulator of educational activity against the background of the implementation of a large program just make mistakes that he is ready to correct?