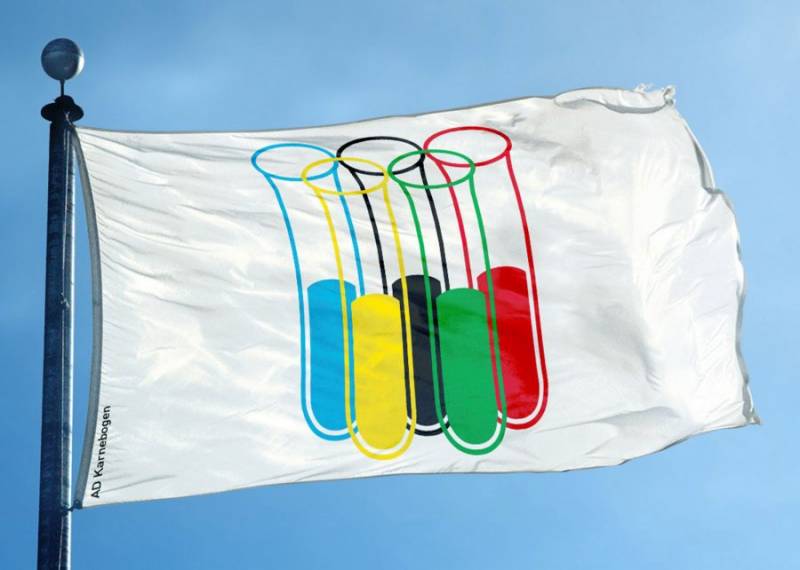 Yes, exactly: the Olympiad has just begun, and Russia has already lost it.

Sport outside politics is a fairy tale for handicapped preschool children. The first olympiads were already marked by political demarches: in 1908, in London, at the opening ceremony, the team of the Grand Duchy of Finland (which was part of the Russian Empire) refused to go under the Russian flag and passed without a flag in general, while the Americans passing the royal box, contrary to tradition, did not lower their state flag: "This flag does not fall before the monarch!"

But the Germans really made the political games in 1936. At the Berlin Olympics, every success of German athletes, every medal they won, every record they set was interpreted as evidence of the superiority of the Aryan race, the triumph of the German spirit. (You can read about it in detail here: https://topwar.ru/38880-olimpiada-v-kogtyah-svastiki.html)

During the Cold War, the confrontation of the USSR and the West in sports arenas was perceived by the Soviet people, and indeed by the whole world, as a reflection of the hidden struggle of the two world systems.

Serious passions seethed somewhere, scouts staked their lives, secret service agents died in secret operations, Chinese pilots Li Xi Tsyun and Wang Yu Shin fought aerial battles with American aces - but the Soviet press kept silence. Folders with the “secret” stamp hid behind the steel doors of safes - a secret operation for that and a secret, so that only those who are supposed to know about it know about it. Only occasionally did short messages appear in newspapers “for the fulfillment of a particularly important state task to award posthumously ...”

But the newspapers wrote about the sports victories of Soviet athletes. The citizens of the USSR, who guessed that everything was not so smooth in the world, as they say in the newspapers, met them as heroes, sounded "in the hard struggle they defended the honor and glory of our state." Soviet athletes took from the people that part of the glory that the fighters of the invisible fronts did not get.

The Soviet people perceived each sporting victory as their common and in the morning the peasants happily shared their impressions: “I saw how we kicked Americans / Canadians / English yesterday?” And when the Soviet flag soared up on the mast and the “Indestructible Union ...” sounded, everyone was proud of his country and could say: "This is our victory!"

Today every issue News begins with a direct inclusion in Pyeongchang, telling how Russian athletes are preparing to "defend the honor of Russia."
Maybe someone has already forgotten how it all began? Then we recall.

The IOC, having made a political decision on the non-admission of the Russian Federation to the Olympic Games, left a loophole: Russian athletes can go to competitions, having publicly renounced their state. Renounce yourself - and you will be forgiven. Simple and ingenious. Let the whole world see the value of the vaunted Russian patriotism, when career and money are at stake. 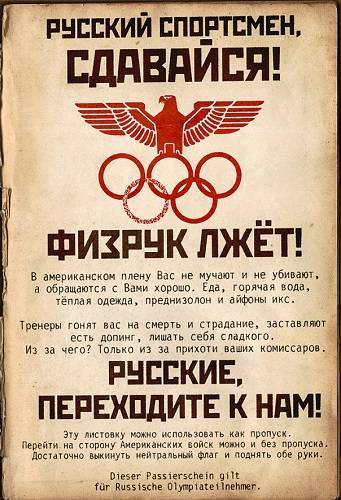 As expected, such athletes were found. The prospect of lightening up at the Olympics, on the wave of success to get invitations to famous sports clubs, to conclude contracts from advertising firms - the temptation is great, the person is weak. And it sounded "they had been preparing for so long ... an athlete has one life ..."

Russian athletes did not pass the test for lice. Salvage turned out to be stronger. And the “patriotic” monologues “may not have the flag of Russia on my uniform, but the Motherland is in my heart” is an attempt to deceive my own conscience and fans.

There are no Russian sportsmen in Pyeongchang!

The reaction of Russian officials from the sport is striking in its illogicality. Caught in a puddle, they tried to get into the mud to the ears. The athletes, who yesterday assured the country that there is no greater honor for them than to defend the colors of the Russian flag, and today they have easily refused this honor, have been declared almost as national heroes.

We are persistently persuaded to root for them, to rejoice at their successes and to support them morally in failures. Apparently, using the example of OAR (Olympic Athletes from Russia), is it planned in the future to bring up a feeling of patriotism among the younger generation?

But do not flatter yourself: are very Russian fans interested in the victories of compatriots won in the composition of foreign sports clubs and teams? In a remote Russian hinterland, a Russian man asked the correspondent whether he would watch the Olympic Games in Pyeongchang, and answered: “No. Who is there to root for? Russia is not allowed to the Games, our athletes are not there».

It is predictable to expect from the Korean Olympic Games not sports successes, but failures. Deprived of sports stars, the UAR team cannot show outstanding results. We are awaited by the heartbreaking stories of the Olympians about the disdainful attitude towards the Russians by the IOC officials, about the trainings ripped off by WADA employees, about biased refereeing, etc., which prevented us from taking gold and silver in Korea.

And we still have to pity them and throw off at the consolation prizes. Maybe they will even receive awards, medals "For services to the Fatherland", although it would be better to leave them alone with their troubles, and to make the real heroes of the few who refused to go to the Olympics, but there are such, but only who remember their names?

Do you know that…

Ctrl Enter
Noticed oshЫbku Highlight text and press. Ctrl + Enter
We are
"Points" over ÜOn the other side of the “red” and “white”. Izborsk Club Report
Military Reviewin Yandex News
Military Reviewin Google News
194 comments
Information
Dear reader, to leave comments on the publication, you must sign in.