February 11 2018
11
During the Second World War, there was a steady tendency to increase the caliber of anti-tank artillery. So, the American army entered the war with the 37-mm guns, and ended it with the guns 76 and 90 mm. The increase in caliber inevitably entailed an increase in the mass of the gun. For infantry divisions, this was not critical (it was necessary only to introduce more powerful tractors), but the situation was different in the airborne units.


The lessons of the Arnhem operation, during which the British paratroopers had to fight with the German tankswere taken into account by the American command. Since 1945, the U.S. airborne divisions received the 90 mm T8 anti-tank gun, which is the barrel of the 90 mm M1 anti-aircraft gun, combined with anti-recoil devices of the 105 mm M2A1 howitzer and a lightweight gun mount. It turned out to be a 3540 kg gun, suitable for parachute landing from S-82 Pekit aircraft, but problems started on the ground: the crew could not move such a heavy system across the battlefield. A tractor was needed, which means that the number of military transport flights doubled aviationrequired for the transfer of an anti-tank battery (division).

The solution could be the creation of a compact self-propelled anti-tank guns. For the first time such an idea was expressed in October 1948 at the conference in Fort Monro, devoted to the prospects for the development of anti-tank weapons, and in April of the following year the customer introduced tactical and technical requirements. The main one was the mass, which should not exceed 16 000 pounds (7260 kg) - the load capacity of the Packet and the heavy landing glider developed at that time (but never accepted for service).

The development of an airborne tank destroyer was entrusted to Cadillac Motor Kar, which was part of the concern General Motors. The chassis design was based on solutions tested on the Otter M76 amphibious tracked carrier. Due to the limited dimensions of the cargo compartment of the aircraft, the self-propelled gun could not be supplied with a wheelhouse, not to mention the roof - I had to confine myself to a small gun shield. The latter was intended to protect the crew from the powder gases when fired, but not to protect against bullets or shrapnel. 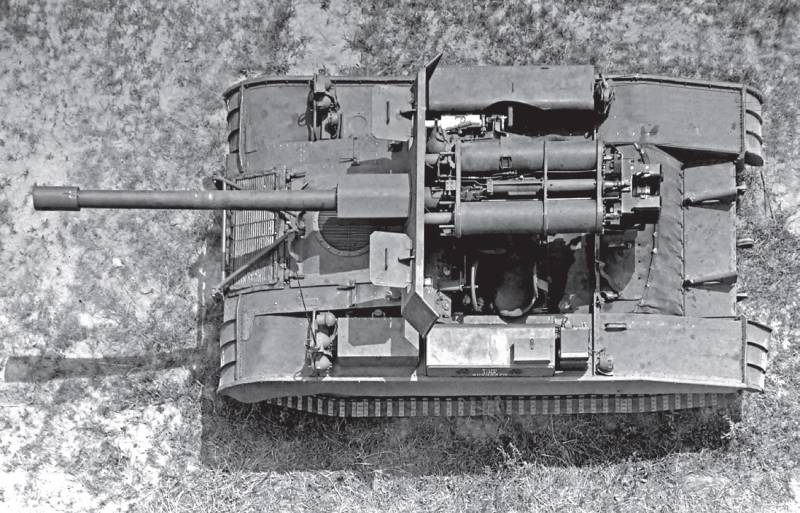 The prototype, which received the T101 index, was ready in 1953 year. Two years later, the car successfully passed military tests in Fort Knox, and it was put into service under the designation M56 Gun Self-Propelled Anti-Tank - “MXXUMX self-propelled anti-tank gun”. The widely occurring name "Scorpion" was approved in 56, the less common was the unofficial name "Spat" (from the abbreviation SPAT - Self-Propelled Anti-Tank). Series production МХNUMX lasted from December 1957 to June 56, its volume amounted to 1957 units.

The M56 self-propelled gun is an unarmoured small-sized tracked combat vehicle adapted for parachuting from a C-123 Provider and C-119 Flying Boxcar (and, of course, from heavier military transport planes) and for transporting helicopters on an external hanger. The car body is aluminum welded, the crew consists of four people. 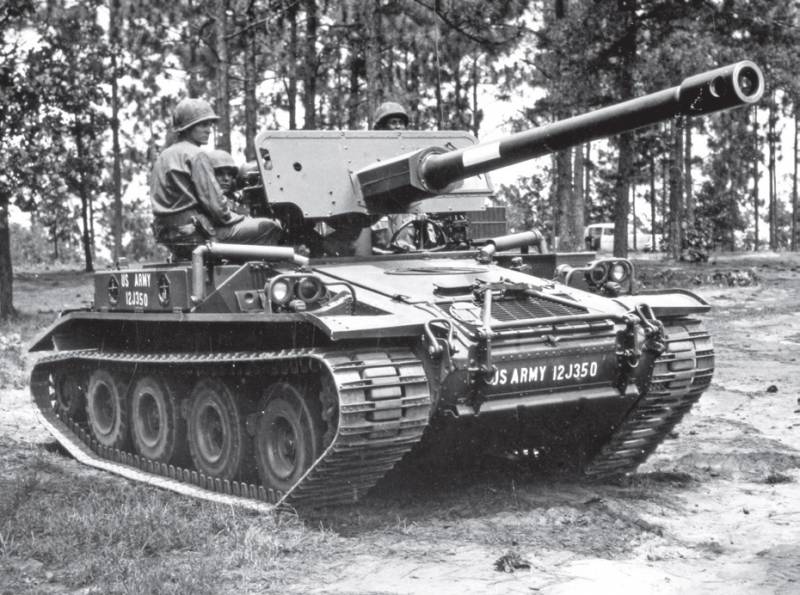 Engine-transmission compartment with a six-cylinder opposite four-cycle carburetor engine of air cooling "Continental" AOI-402-5 with a capacity of 165 l. with. and the Allison manual gearbox CD-150-4 (two gears forward and one reverse) is located in the front of the M56 body. The rest of the space is occupied by the combat compartment, combined with the control compartment. In the center of it on the thumb knot of the M88 there is an 90-mm gun M54. To the left of the gun there is the driver’s workplace (for him, in the gun shield there is a glazed window with a windshield wiper- “janitor”), to the right is the gunner’s place. Behind the driver-mechanic is placed the commander, behind the gunner - loader. At the stern of the machine is an ammunition on 29 unitary shells. For the convenience of the loader behind the ammunition there is a folding step. 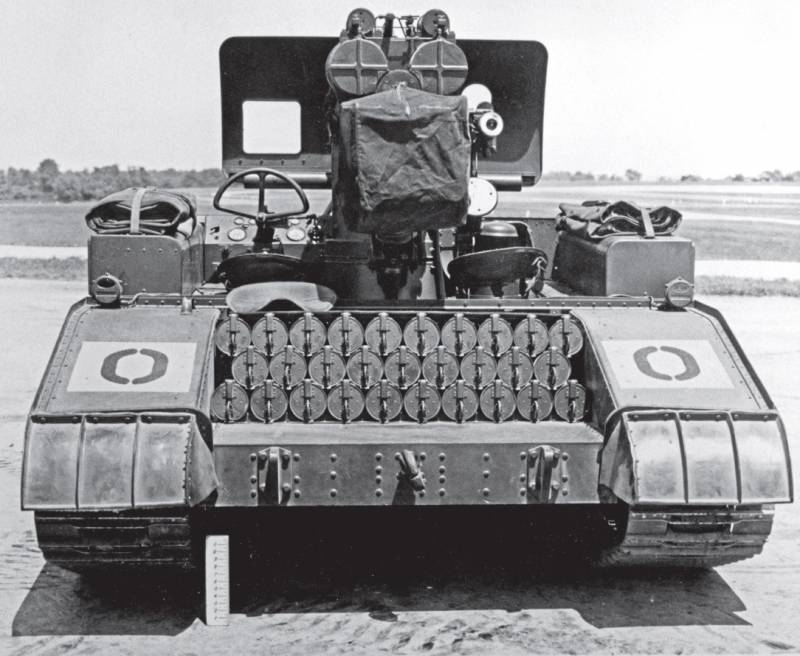 Chassis self-propelled consists (with respect to one side) of the four large diameter rollers with a torsion bar, equipped with pneumatic tires. Tires have special tabs that allow, if they break through, drive to 24 km (15 miles) at speeds up to 24 km / h. Drive wheel - front location. Caterpillars are rubber-metal, 510 width mm. Each caterpillar consists of two bands made of rubberized fabric and reinforced with steel cables. The tapes are interconnected by steel forged crossbars with rubber pads. The ground pressure of the Scorpion is only 0,29 kg / cm2 (for comparison: for М47 and М48 tanks, this indicator is 1,03 and 0,79 kg / cm2, respectively), which ensures good machine maneuverability.

Installed on the "Scorpion" 90-mm gun M54 (barrel length - 50 caliber) was developed on the basis of the gun M36, used on tanks M47. Compared with the prototype, it is lightened by 95 kg. The range of pickup angles in the vertical plane is from −10 ° to + 15 °, in the horizontal one - by 30 ° to the right and left. The barrel of the gun is a monoblock with a screw breech and a single-section muzzle brake. The wedge gate, semi-automatic, vertical. On top of the breech of the gun are mounted two cylinders of hydraulic recoil devices. Guidance guns have hand drives, manual loading. The gun is equipped with a M186 telescopic sight with variable magnification (4-8-multiple).

The range of used ammunition is quite wide and includes all types of unitary shots for tank guns M36 and M41; It is also allowed to use 90-mm projectiles of anti-tank guns of the German company "Rheinmetall". To solve the main task - fighting tanks - can be used: M82 armor-piercing-tracer with an armor-piercing tip and a bursting charge; M318 (T33E7), M318A1 and M318A1C armor-piercing tracer without explosive charge; armored piercing tracer shells M304, М332 and М332А1; M348 (T108E40), M348A1 (T108E46) and M431 (T300E5) cumulative non-rotating (fired) shells. In addition, the ACS can fire the M71 high-explosive fragmentation projectile, the M91 fragmentation-tracer, the M336 framing, the M377 fragmentation (with swept striking elements) and the MNNXX smoke.

The machine is equipped with a VHF radio station AN / VRC-10, which is served by the commander. The means of night observation are represented only by a helmet-mounted night vision device of the driver. 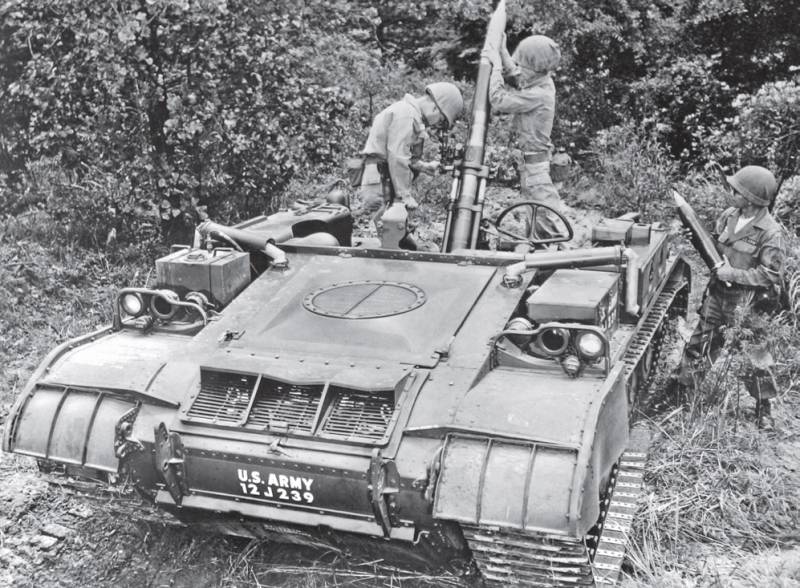 On the basis of the M56, two experimental self-propelled guns were created. In 1958, an anti-tank ACS was tested at Fort Benning, where instead of 90-mm guns, they installed 106,7-mm no recoil М40 - with transportation of such weapons the usual jeep coped easily, so they did not accept it. Another self-propelled gun, also not included in the series, was armed with an 106,7-mm mortar M30. On paper, there are also options for reequipment of the M56 SS-10 and Entak anti-tank guided missiles.

Service and combat use

According to the original plans, each of the three US airborne divisions (11-i, 82-i and 101-i) was to receive a scorpion battalion (53 machines in each). But the adoption of the M56 into service coincided with the reorganization of the infantry and airborne divisions - transferring them from the usual "threefold" to the "pentom" structure. Now the division did not include three regiments, but five combat groups — essentially, reinforced infantry (airborne) battalions. As a result, the "Scorpions" entered service with anti-tank platoons that were part of the company’s headquarters of the airborne combat groups (VDBG). This platoon included control (platoon commander (lieutenant), his deputy (sergeant) and radio operator with a jeep equipped with AN / VRC-18 radio station) and 3 fire sections (in each 8 man and 2 self-propelled M56 self-propelled guns). Thus, the platoon consisted of 27 man of personnel, 6 "Scorpions" and 1 jeep. 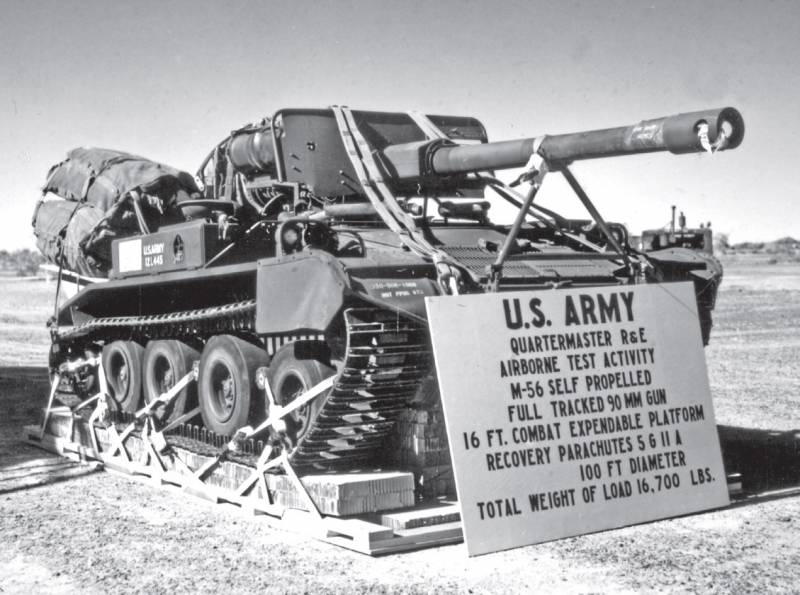 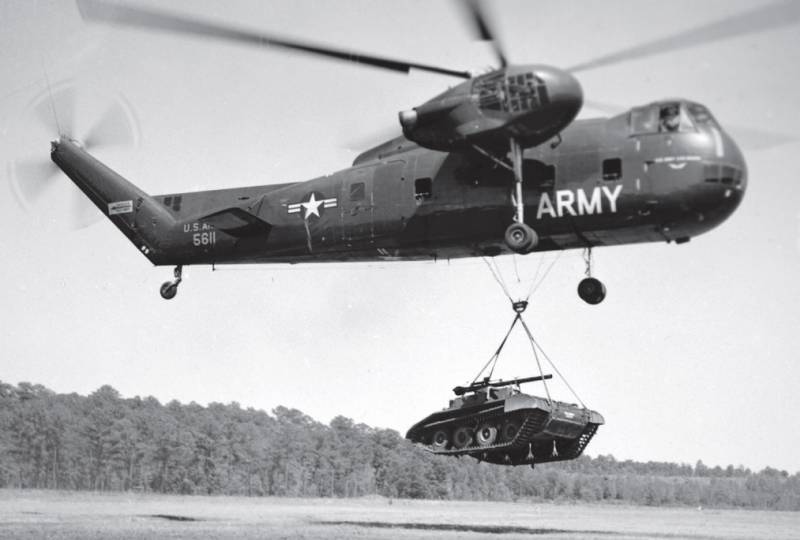 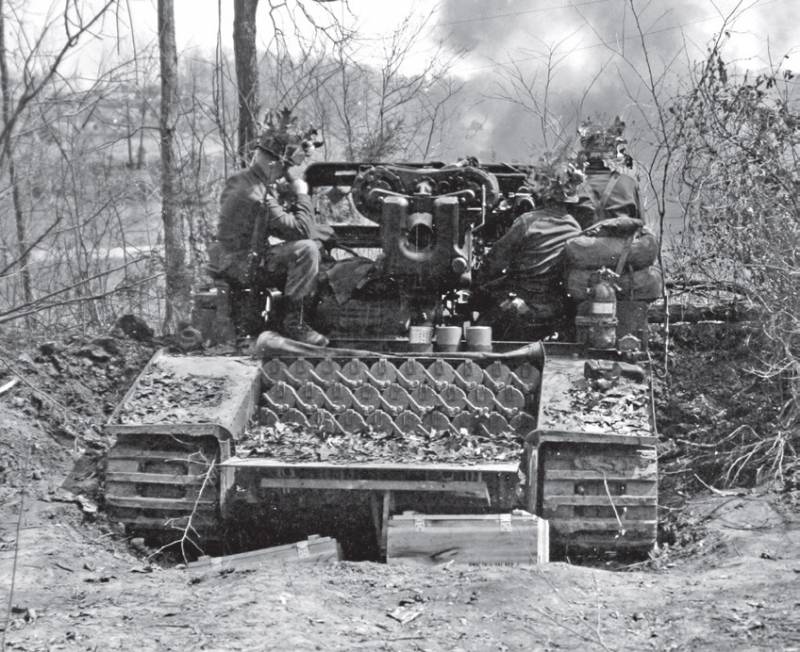 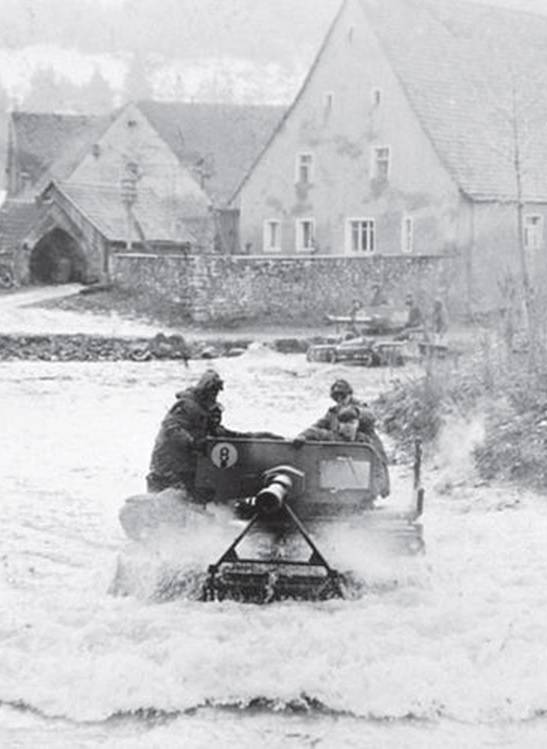 M56 self-propelled guns from the 1 Fighting Group of the 16 Infantry Regiment of the 1 Infantry Division during exercises in the Federal Republic of Germany. February 1961 of the year.
Estes KW M50 Ontos and M56 Scorpion 1956-70. - Oxford: Osprey Publishing, 201

In 1961, the “pentamic” structure was declared untenable and unsuitable for conducting combat operations in non-nuclear conflicts, and the US Army began another reorganization. In accordance with it, the airborne division consisted of three brigade headquarters and nine airborne battalions, as well as support units, including a tank battalion. It was assumed that he would receive new airborne tanks МХNUMX "Sheridan", but as a temporary measure (until the Sheridans were put into service) tank battalions 551 and 82 airborne troops in 101 were handed over 1964 "Scorpions" - machines, not not only tanks, but not having any reservations. They did not allocate funds for the maintenance of the crews of these vehicles, so until the receipt of the Sheridans these battalions remained “virtual”.

The only armored division that exploited the Scorpions and fought on them was the D 16 Tank Regiment Company (D-16), which was formed in 1963 as part of the 173-th Separate Airborne Brigade (VDBr) deployed on Okinawa Island. The company consisted of four platoons of four M56, a control section (four BTR MNNUMX) and a mortar section (three 113-mm M106,7 self-propelled mortars on the M106 chassis). 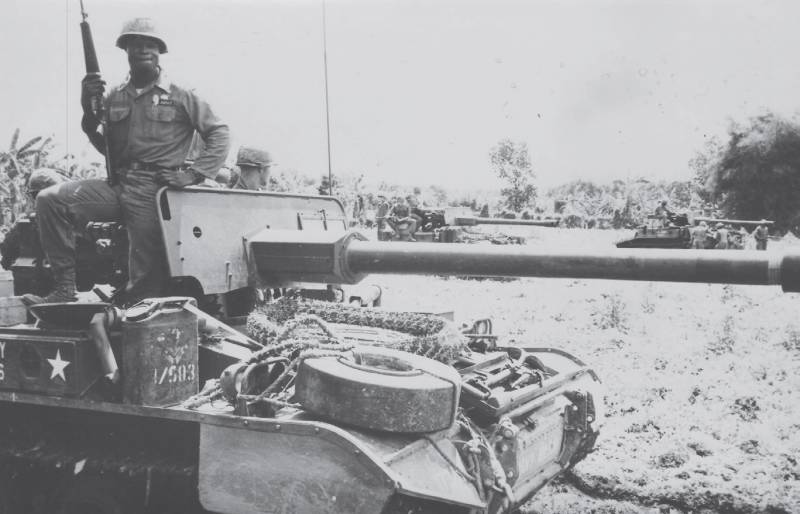 In May 1965, the 173 th WDBr was transferred to Vietnam. During the war, the strengths and weaknesses of the M56 were clearly manifested in the jungle. On the one hand, the good maneuverability of the self-propelled gun made it possible to move along “tank-inaccessible” terrain, on the other - for the 90-mm gun there were few suitable targets. The main task of the Scorpions was the direct support of the airborne battalions and companies operating on foot, and here the most serious shortcoming of the M56 - the complete lack of booking - was extremely acute. The events that took place on 4 March 1968 of the year became a drop that broke the patience of the paratroopers, when a company lost a 8 man in one battle. After that, the “tank crews” of the D-16 changed their M56 to more universal and much better protected M113 armored personnel carriers. 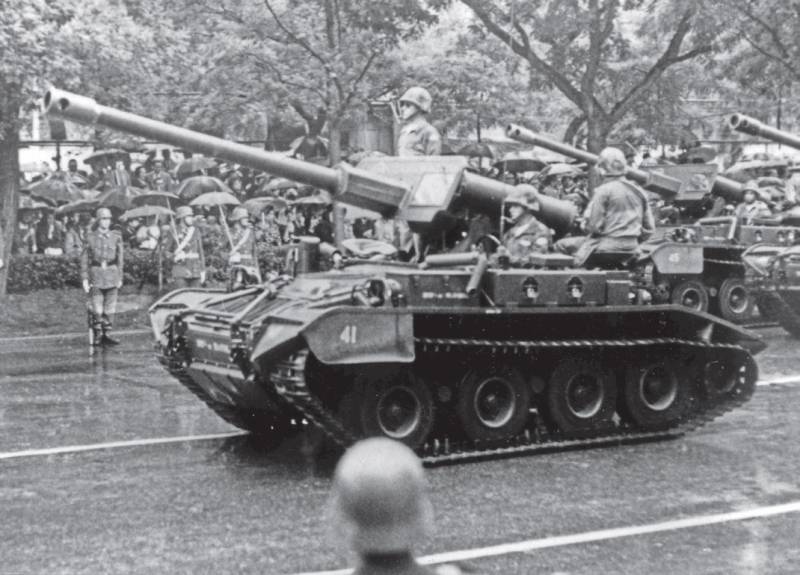 After the American army was decommissioned, part of the M56 self-propelled guns went to the warehouses, and some were transferred to the Allies. Spain received five vehicles in the 1965 year - until the 1970, they served in the anti-tank platoon of the marines. Neighboring Morocco in 1966-1967 was given 87 Scorpions. According to the Jaynes World Armiz reference book, in 2010, the Moroccan army had 28 M56 self-propelled guns in storage. 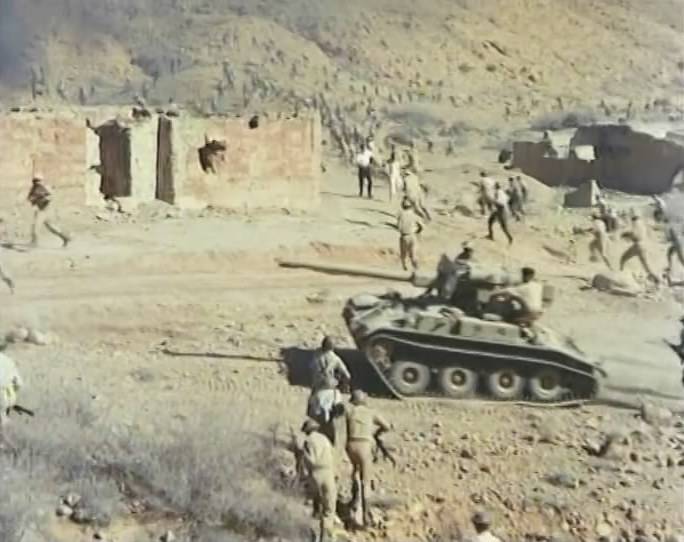 Moroccan "Scorpions" participated in the fighting in Western Sahara.

In 1960, two T101 prototypes, modified to the M56 serial standard, were handed over to the Federal Republic of Germany. The Germans were not seduced by an unarmored car and did not accept it. After a short test, both copies were converted into training machines for the training of driver-mechanics, removing the guns and installing glazed cabins. 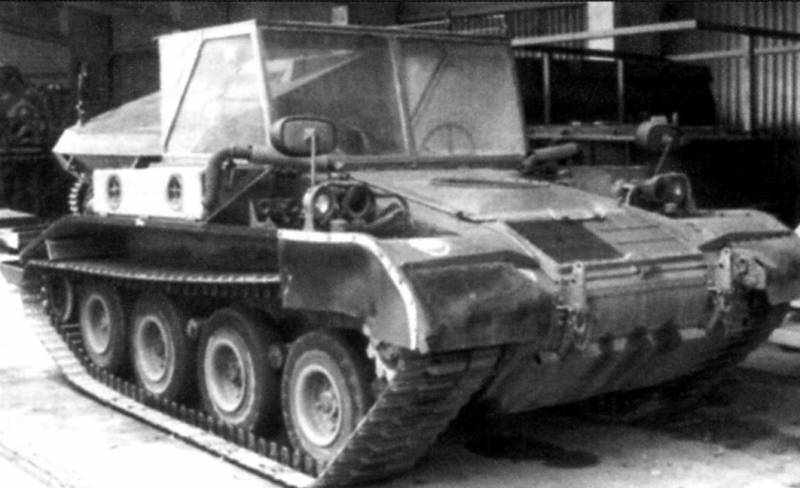 Т101, converted into a machine for the training of drivers.
Omelyanyuk P. "Scorpion" - self-propelled gun for landing // Arsenal collection. - 2013. - №5

A number of retired М56 acquired the American fleet. The machines were converted into radio-controlled targets QM-56 and in 1966-1970 they used Fallon, Warren Grove and Cherry Point for combat training of attack aircraft pilots and fighter-bombers.

The M56 self-propelled gun had good mobility and powerful armament for its time. The cumulative shells of her 90-mm guns could surely hit any Soviet tanks of the first half of the 60-s. At the same time, the gun was too powerful for a seven-ton chassis, the front rollers of which, when fired, were taken off the ground. In addition, the absence of any reservation allowed the use of self-propelled guns against tanks only in defense (from ambushes), making the Scorpion unsuitable for supporting the assault in offensive operations.

Compared with the Soviet counterpart - the airborne self-propelled installation of the ACS-57 - М56 is more than twice as heavy (7,14 t against 3,35 t). In addition, the ACS-57 is smaller than its counterpart (its height is only 1,46 m versus 2 m) and, unlike the Scorpion, has a reservation at the front and sides, however, its thickness (4-6 mm) at a short distance did not even provide protection from conventional 7,62-mm bullets. As for weapons, the superiority of the M56 was overwhelming: the muzzle energy of its 90-mm M54 cannon was 4,57 MJ, and the 57-mm H-51 cannon mounted to ASU-57 was only 1,46 MJ. The parameters of mobility (speed and power reserve), both self-propelled guns were approximately equivalent.