Black base and jihad superstructure 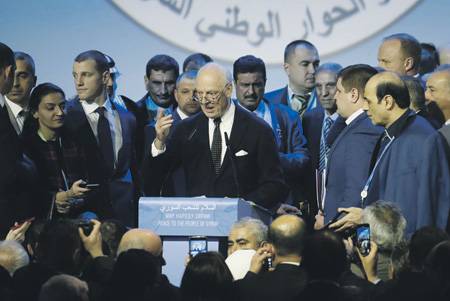 Opening held 29 – 30 January this year. in Sochi, the Congress of the Syrian National Dialogue, Russian Foreign Minister Sergey Lavrov read out greetings to the participants - Sheikhs and almost 1500 representatives of all the tribal communities of Syria from Russian President Vladimir Putin. At the same time, the minister stressed that the forum was convened thanks to the active efforts of not only Russia, but mainly the leaders of Iran and Syria. The passions during the speeches and debates of the Sochi forum reminded the spirit of the very recent clashes on the battlefield of government troops with troops of the “irreconcilable opposition”. Skirmishes have reached the point that Lavrov had to personally pacify the participants in the discussion. Nevertheless, the “process has begun” and the intra Syrian dialogue has begun, despite the persisting contradictions between the Sunni and Shiite communities, which, as is known, swell in every possible way with the support of the United States and Saudi Arabia. They did not succeed in disrupting the convocation of the congress, although a number of representatives of the “irreconcilable”, who were seeking to overthrow the regime of Bashar al-Assad, left Sochi. In the discussions, the position of Iran through representatives of the pro-Iranian groups, jointly with Moscow, was clearly visible to reach a complete peace agreement of all faiths in Syria, primarily Sunnis and Shiites. A very important step has been taken: a special working group has been created to work out proposals for a peaceful settlement of the situation in Syria, a post-war reorganization of the country and a draft of the new Syrian Constitution.


The Syrian national dialogue will undoubtedly continue. But it would be premature to declare the war of terror-antiterror in Syria already finished. This is the case when it is too early to say: the end is a crown.

WAR - TO WHOM IN HARM, TO WHOM

Any state, before becoming involved in a big war, translates its economy on a war footing. The Caliphates from the "Islamic State" (IG, a terrorist organization, is banned in the Russian Federation), the economy as such was not and is not. It was replaced by robberies and the seizure of another’s property with the exploitation of mineral resources rich in oil, with an extensive logistics network in Iraq, Libya and Syria. There has never been another way for the Caliphate to spread terrorist jihad. In the entire space from the Persian Gulf to the Indian and Pacific Oceans, the self-proclaimed caliphate had its own protectorate and “Emirates”. They could not be called "add-ons", but his "extensions." After the collapse of the Soviet Union, Russia throughout the entire post-Soviet space also began to encounter the announcement of such “emirates” in the Caucasus and the Volga region, in Central and South Asia.

Immediately make a reservation, the Caliphaters managed to achieve a lot in their ideological work. The financial support of the propaganda war of the IG came from the “black base” and was carried out with the help of Western patrons, primarily the secret services of the United States and other NATO countries. This allowed them to create the same “black media empire”. Its centers were created not only in the West, but also in many countries of the Muslim world as a springboard for expanding jihad. On the ideological front, the Caliphates even have a certain advantage over those who do not have their own state ideology or national idea. As their achievement, jihadists are presented with the results of recruitment work in the entire post-Soviet space, especially where Muslims live. Under their control, most Muslim communities and mosques are taken. By the 2017 year, according to some estimates, they managed to attract to their side about 20 thousand Russian-speaking Muslims, including women and children. This is most likely the result of using a huge technological resource, including the Internet, primarily social networks. At the same time, a clever processing of the brain is being conducted, as if “the Muslims of Russia have no future” and the Constitution of the Russian Federation does not even mention the state ideology.

In Iraq, after his occupation, the self-proclaimed caliph, Abu-Omar Al-Baghdadi, who had served four years in American torture chambers and presented himself as a kind of "martyr of Islam", appeared. Among the latter-day ideologues was the relatively recently lost preacher Al-Adnani. Turning to the West as a “new Rome”, Al-Adnani warned: “If we don’t get to you, our children and grandchildren will do it for us.” The common cause of all Muslims declared submission to the Caliph and Sharia law. The fighters and their wives, Al-Adnani urged, must come to the caliphate with one-way tickets to gain "true freedom." The Caliph is obliged to declare jihad every decade. If he suddenly agrees to a lasting peace with the infidels and recognizes some boundaries, then the caliphate will be doomed to collapse and die. Al-Adnani while referring to the Quran: "Islam has no limits." Recognition of any boundaries should be anathema. These are the fundamental principles of the caliphates with references to the Quran and the hadiths invented by them. They form the basis of their ideology. Just with them, jihadist ideologues fill gaps in the policies of those countries where there is no state ideology.

It should not be forgotten that Abu Omar declared in June 2013 of the year that he was descended from the same tribe as the last prophet, Muhammad. His fellow travelers, who had become black banners, expressed their readiness to go to the very end of the world for their caliph. Their ideology can be considered one of the varieties of Messianism, which aims to conquer not only the countries where Muslims live ("dar-al-Islam"), but also aliens living in the world of their wars ("dar-al-harb") .

In this connection, jihadists, naturally, are interested not only in the total number of Muslims in the world, but also in how many of them live in the post-Soviet world, including Russia. From their midst, the Caliphate recruits new militants and jihadists; their wives are lured to concubines. The exact number of Muslims in Russia is not called in Wikipedia. It is defined within 20 – 30 million. Former chairman of the Islamic Committee of Russia Geidar Jemal argued with us that over the past two decades, the number of Muslims in Russia alone has exceeded 30 million. Russian Muslims in the Volga region, in the Caucasus and Crimea, are unlikely to want become loyal subjects of any self-styled caliph or his emirs.

One of the main components of the hybrid war is information war, often accompanied by propaganda of Islam in mosques. In such wars can not surrender without a fight. So far, we have succeeded in counterintelligence activities, but not in counter-propaganda. In the 2017 year alone, in Russia, the FSB forces neutralized dozens of cells of extremist organizations banned in Russia. Unfortunately, the work of Islamic preachers and clergy in mosques is at a very average level, which only facilitates the work of recruiters from extremist and terrorist organizations, which, in turn, receive diverse training in special "jihad centers" in the West. And when you read the phrase “In God We Trust” (“We believe in God”) on all dollar bills, I want to know what kind of God is believed by those who count “green” with jihadists and other terrorists, who in Syria are classified as “ moderate opposition ” weapon.

The hybrid war of terror and antiterrorism conducted by Washington seems to be becoming one of the varieties of a quasi-blue, or hybrid, war against Russia. Back in the days of the Afghan epic, the contours of the current "Islamic State" emerged. Its origins were laid in the Central Intelligence Directorate (CIA) fostered in the bowels and recognized by Al Qaeda as terrorist and banned in Russia, led by Osama bin Laden during the "guerrilla struggle" of its gangs with a limited contingent of Soviet troops in Afghanistan. It is known that the Al-Qaeda terrorists relied mainly on the military-economic basis of the United States, as now the lion’s share of military aid to the IG gangs and the “moderate opposition” in Syria, directly or through intermediaries, comes from American sources.

The drone war, which began on the night of Christmas on January 6, 2017 after the contraction of our military contingent in Syria using small-sized unmanned aerial vehicles, is nothing more than the beginning of the development of one of the types of aerial attacks, as it is called, “Locust Raid”, developed The Pentagon back in 2015. According to American experts, a raid of 100-200 such bombed drones can destroy aviation equipment, radio-technical support elements and air defense means at almost any airbase. But the enemy’s calculations did not materialize. Six of those camouflaged as handicrafts, but with high-tech drones filling, were planted by our special means, and the rest were destroyed. The next day, the Russian Aerospace Forces (VKS) launched high-precision strikes at positions and targets from where this drone attack was launched. Thus, despite the fact that the main battle formations of the Islamic State are defeated in Syria, the war on terrorism in the Middle East and the Syrian Arab Republic has not yet been completed. The Western coalition led by the United States, operating on the territory of Syria and Iraq, did not come to come to terms with the victory of the Russian air forces and the troops loyal to the Bashar al-Assad regime. The pro-American coalition serves as a bridge between the West and jihadists.

The Russian proverb “Trust but verify” has already become the talk of the town often repeated by the Republican President of the USA Ronald Reagan. He was very fond of using it as a partner in negotiations with Gorbachev on medium-range and short-range missiles (the Treaty on the Restriction of Mid-Range and Short-Range Missiles). It seems that Moscow now has the right to redirect these words to American "colleagues".

US President Donald Trump tried to present himself as our “partner” in the fight against international terrorism. But judging by the double game that the Americans are waging in their proxy war (the “war of attorney” by proxy), the United States is trying to oust Russia from Syria and the Mediterranean region with the help of anti-government forces, including the “moderate opposition” and the Kurds. Erdogan, the president of Turkey, the US ally of NATO, could be convinced of this after she attacked the Afrian Syrian region controlled by the Kurdish Democratic Union and its self-defense units.

In the complicated tangle of hybrid wars in Syria, in the Middle East and in the Square, it is becoming increasingly difficult to determine who is at war with whom. The Pentagon sends its advisers and instructors, different types of weapons to Syria, to Ukraine, not knowing whose hands it falls into.

Usually reserved in the assessments, the Ministry of Defense of the Russian Federation in its next press release pointed to provocative actions of the United States in Syria, aimed at isolating the northern regions of the country and in fact at its dismemberment. It can also not alarm the neighboring Turkey, Iraq, Lebanon and Israel with Palestine. Such a double game will not lead to good. Such a “war of proxy” can turn for everyone and everyone who knows what a boomerang.

Ctrl Enter
Noticed oshЫbku Highlight text and press. Ctrl + Enter
We are
A great interview with Sergey Lavrov: about Ukraine, Obama and IranWhat you didn't want to know about England
Military Reviewin Yandex News
Military Reviewin Google News
3 comments
Information
Dear reader, to leave comments on the publication, you must sign in.