February 12 2018
43
A few days ago, official Washington published a new Nuclear Policy Review, which addresses various US security issues. Among other topics in the document are projects of a promising long-range bomber and a new weapons for him. The American publication The National Interest studied the available information and based on it tried to compose the current picture. The topic of his new article was promising means of destruction, which will have to use the American long-range aviation in the distant future.


An article under the traditionally screaming title “How can the B-21, B-2 and B-52 Can Bomb Russia or China” (“How America is going to be sure that B-21, B-2 and B -52 will be able to bomb Russia and China ") was written by the regular author of the publication Dave Majumdar. It was published on 7 February under the headings of The Buzz and Security, and without reference to a specific region. The title of the material does not fully disclose its topic, because of all aspects of the use of long-range aviation, only the topic of new ammunition is considered. 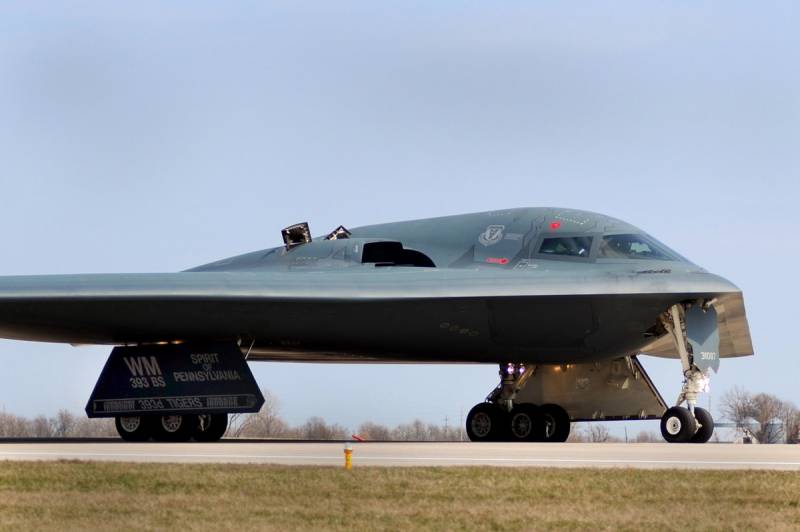 D. Majumdar begins his article with a reminder of current plans and their consequences. He points out that the Northrop Grumman B-21 Raider long-range bomber, which has not yet managed to exit the design stage, should ultimately become the basis of the air component of the American strategic nuclear forces. Nevertheless, even B-21, despite the newest developments in the field of stealth, over time will lose its potential to break through the enemy's air defense. Russia and China will continue their work in the field of air defense systems, and therefore B-21 with time will hardly be able to penetrate the protected area with impunity. In this regard, the Pentagon is currently developing a new Long-Range Stand-Off (LRSO) cruise missile, which will become the "partner" of a promising bomber.

Further, the author cites a fresh review of the nuclear policy, revealing the plans of the US military in the field of strategic aircraft weapons. The document states that the LRSO project is designed to ensure the ability of bombers to use strike weapons capable of solving problems in the conditions of the use of advanced air defense by the enemy. Such weapons in the future will maintain the combat effectiveness of the aircraft at the required level.

The new aircraft missile, as the author notes, will also be able to contribute to fleet available long-range bombers. Until a certain time, the basis of such an aviation group will remain “ancient” Boeing B-52 family vehicles in the amount of 46 units and 20 newer Northrop Grumman B-2A. This situation will continue until the troops receive a sufficient number of new B-21s.

A review of nuclear policy indicates that the rearmament of strategic aviation with Long-Range Stand-Off missiles is of crucial importance in the context of ensuring sufficient effectiveness of the bombers. This will preserve the desired potential even in the conditions of the development of the air defense of a potential enemy, as well as increase the flexibility of the use of aviation. In particular, the LRSO missiles will allow old B-52H aircraft to remain an effective element of strategic nuclear forces and to maintain their combat potential in case of unforeseen technical or geopolitical problems.

Long-range bombers B-52 and B-2 still retain the required combat effectiveness, but the defenses of the likely enemy are not in place. The development of air defense systems leads to an increase in their capabilities and turns out to be a serious conclusion for strategic aviation. As a result, the US Air Force needs a new bomber.

D. Majumdar again quotes the Nuclear Policy Review. This document indicated that the continued improvement and proliferation of air defense systems, combined with the gradual obsolescence of the B-52H and B-2 aircraft, as well as the ALCM missiles, necessitated the creation of new aircraft. All of these factors have become prerequisites for the launch of the next generation bomber development, construction and deployment program called the B-21 Raider. According to the Survey, in the mid-twenties, the first aircraft of this type will have to enter service. First, they will complement the equipment used in the troops, and then replace it.

However, the B-21 bomber, which has not yet been created, is already facing certain problems in the context of combat use. This was repeatedly mentioned in the past by US military officials; the same topic is raised in the fresh review of nuclear policy. Even an improved and sophisticated B-21 will not in all cases be able to break through a developed echeloned air defense system of a potential enemy. Over time, this problem will become increasingly urgent.

D. Majumdar recalls that the B-21 Raider bomber is actually created as part of a large shock system, including various means and equipment samples. Together, all elements of such a system will be able to penetrate the protected area and destroy the indicated targets. In this case, the Long-Range Stand-Off rocket, included in the B-21 ammunition, will, among other things, become a means of ensuring subsequent strikes of tactical or strategic aircraft.

A review of nuclear policy also indicates that B-21 will be able to use not only LRSO missiles. It will be possible to place free-falling bombs or other weapons into the cargo compartments of such an aircraft. In this case, the greatest combat effectiveness will be achieved precisely with the use of promising cruise missiles.

According to existing plans, the "debut" of a promising aircraft in the air force should be held in the middle of the next decade. Most of the information about the program B-21 is still classified, but now, as noted by the author of The National Interest, we can say that the pace of its implementation is far from the desired. The project may encounter certain problems in the context of graphics.

According to the Nuclear Policy Review, delays in work on the B-21 or advanced weapons designed for this aircraft will reduce the potential of the US Air Force. These problems, first of all, will limit the possibility of long-range aviation in the matter of breaking through enemy air defense. In addition, the choice of options for action in certain conditions will be limited. Finally, the ability of the American army to send "visible signals of containment" to a potential enemy, which is precisely what strategic bombers are best suited for, will be under attack.

After reviewing the latest figures provided by official sources, Dave Majumdar draws conclusions. He believes that the Northrop Grumman B-21 Raider program is important to the security of the United States. It is imperative that this project succeed and lead to the desired rearmament of the air force. Even if the project requires extreme pressure and a lot of effort from the Air Force, it should be completed.

The article “B-21, B-2 and B-52 Can Bomb Russia or China” once again raises the topic of promising American projects B-21 and LRSO, and again examines their importance for the development of US forces in the desired direction. At the same time, it takes into account the latest official reports on two projects published in the framework of an extensive document on the nuclear weapons policy.

The conclusions of D. Majumdar, made on the basis of known and new data, are obvious. Having received the B-21 Raider bomber and the LRSO rocket, the United States Air Force will retain the possibility of an advanced enemy defense lay-through of a potential enemy, including with a reserve for the distant future. If the promising project does not end in success, the American army will face serious problems and lose some of its strike potential. For this reason, according to the author, the work must be completed without thinking about the difficulties and problems.

It is curious that the title of the article mentions hypothetical attacks on objects of Russia and China. In the publication itself, however, a similar topic is raised only indirectly. The topic of attacking targets covered by a developed air defense system is repeatedly raised, but to whom they belong is not specified. However, the well-known information about the programs of building air defense leaves no doubt and makes you remember the screaming title.

Recall, the current plans of the Pentagon include the development and launch of mass production of the promising long-range bomber B-21, in fact, representing a further development of the already known ideas. The basic concept of this machine is based on the refined ideas of the existing B-2 aircraft. Like its predecessor, the new B-21 will have to secretly go to a given area and launch rockets or drop bombs. Its main objectives in this case will be objects of air defense. Suppression of anti-aircraft systems will ensure a more secure operation of other attack aircraft.

The contract to create the project B-21 was signed in October 2015. By now, according to various sources, the Northrop Grumman development company has managed to do some work, but overall the project is still far from completion. Construction and testing of the first experienced bomber is attributed to the first half of the twenties. By the middle of the decade, it is planned to build and transfer to the customer the first production machines of a new type.

In mid-January, the command of the US Air Force announced a possible shift in deadlines. At that time, there were disagreements among congressmen on the future defense budget. Excessive activity of supporters of reducing spending on the army could lead to a reduction in the costs of promising projects. Among other things, the result of this could be the inhibition of work on a B-21 bomber with a certain shift in timing.

One of the main armaments of the aircraft B-21 Raider should be a Long-Range Stand-Off cruise missile (LRSO). Work on these weapons started at the beginning of the current decade, but has not yet reached the final stages. So, it was originally supposed to start designing a rocket in 2015, but for a number of reasons, the launch dates for development have shifted. Preliminary study of the project continued until the 2017 year. Only in August last year, contracts were signed for the creation of preliminary projects.

In accordance with the agreements from 24 August 2017, Lockheed Martin and Raytheon to 2022 will have to develop and present their options for a promising cruise missile, after which the Pentagon will choose the most successful one. All the necessary research and development work is planned to be completed over the next decade. Not later than 2030, the United States Air Force plans to receive the first LRSO serial missiles.

In terms of tactical niche, the LRSO rocket will be a replacement for the existing AGM-86 ALCM. At the same time, a promising product will have the most serious advantages. The current ALCM can only be used by B-52H bombers, while the LRSO project provides full compatibility with existing B-2A vehicles and the promising B-21 Raider.

Both promising projects are still at the stage of shaping the appearance and elaboration of technical documentation. In addition, most of the information about them is still classified. The developers of the bomber have already published his image, as well as clarified some technical characteristics. Accurate information about the rocket for the new aircraft has not yet been given.

Like any other promising projects, the B-21 Raider bomber and Long-Range Stand-Off cruise missiles face certain challenges. At the same time, such projects relate to the field of strategic armaments, and therefore differ in particular importance for national security. As D. Majumdar noted in the finale of his article, these projects must be completed in any conditions, even if they require special exertion of forces.