February 10 2018
13
The German version of the Croatian military history magazine Husar (Nr.1-2018) published a selection of photographs illustrating the fighting in Africa during the Second World War. The originals of these photographs are stored in the NARA archive in the United States and have not been previously published in open sources. 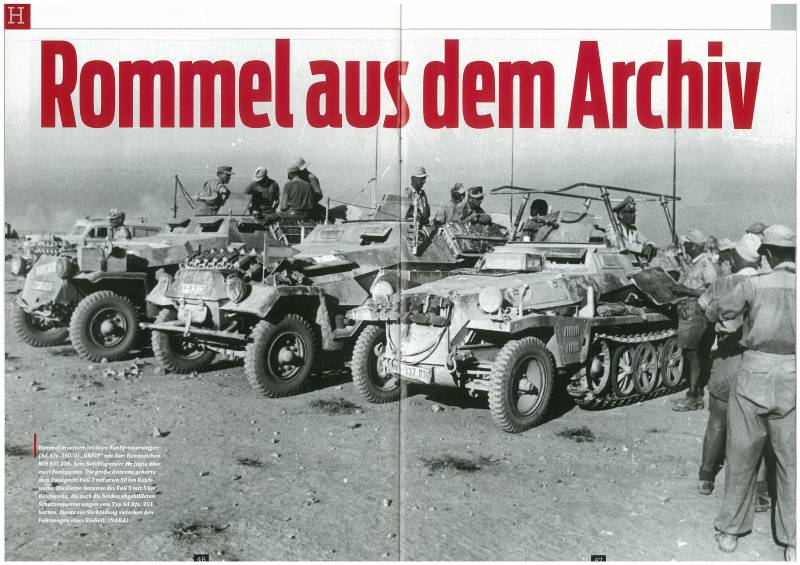 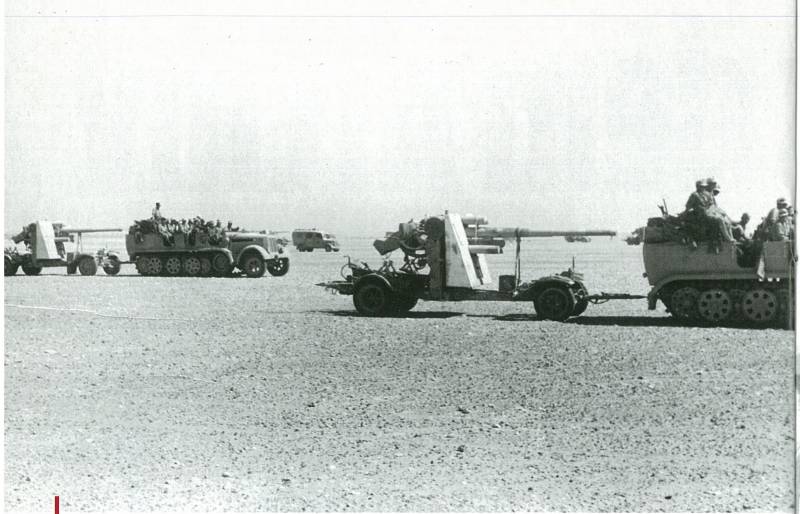 The 8,8-cm-Flak 36 / 37 anti-aircraft gun is towed by Krass-Maffei's 8-ton Sd.Kfz 7 tractor. This tool was effective weapons against air and ground targets.
1st Division of the 33rd Anti-Aircraft Artillery Regiment (1./Flak-Rgt.33 (gem.mot.)) Arrived in Cyrenaica on February 10-11, 1941 from France. The 33rd regiment was formed on October 1, 1939 in Hull as part of five batteries with 20 guns. In North Africa, the regiment included three 8,8-cm batteries. guns and three batteries of light 2-cm guns Flak 38. During the French company, one of the 8,8-cm batteries destroyed five heavy British under Arras tanks Matilda, which determined his future fate. 8,8-cm guns became the most important anti-tank weapon in the African company. Their shells with an initial speed of 810 m / s could penetrate at a distance of 500 m 110 mm armor mounted at an angle of 60 degrees. This was enough to penetrate 78 mm of the frontal armor of British tanks Matilda from a distance of 1,5 km. They themselves remained outside the reach of their guns, which also had no high-explosive shells. (NARA / "Husar"). 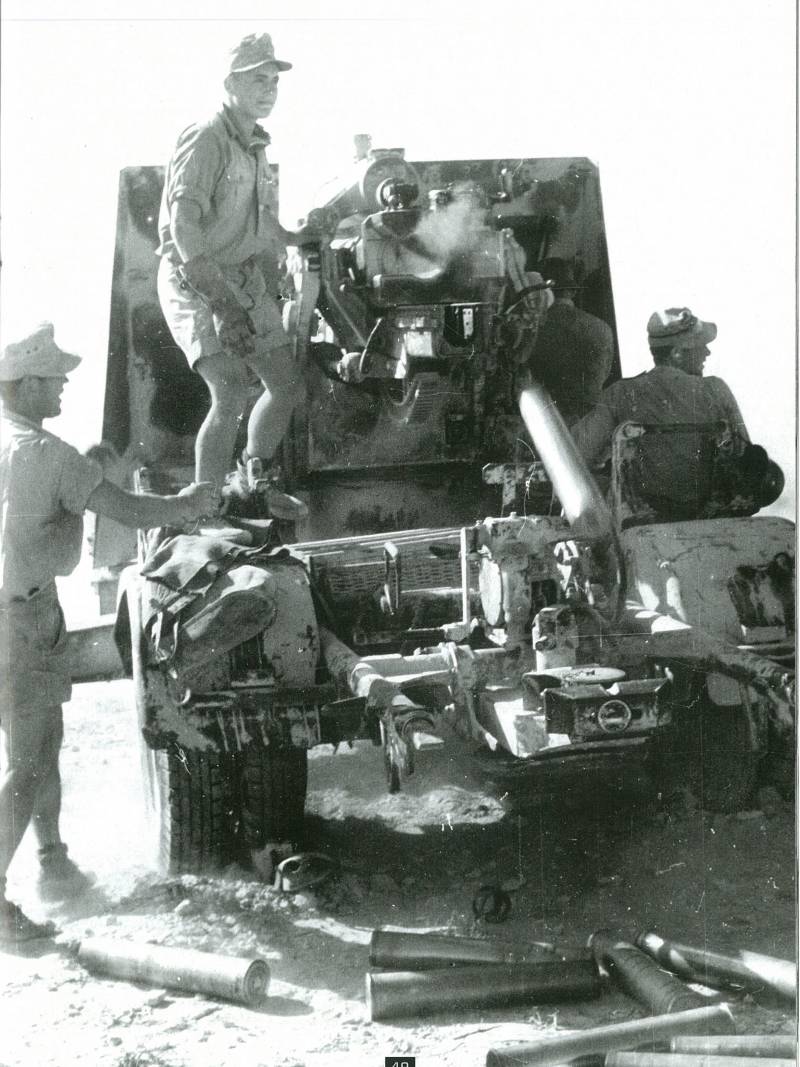 A rare photograph of the Flak 36 cannon at the time of the release of the liner after the shot. Photo taken apparently during the siege of Tobruk. Apparently at this moment there is no threat to the calculation, and therefore one of the gunners is comfortably located on the wing. The gunner sits with his back to him. (NARA / "Husar") 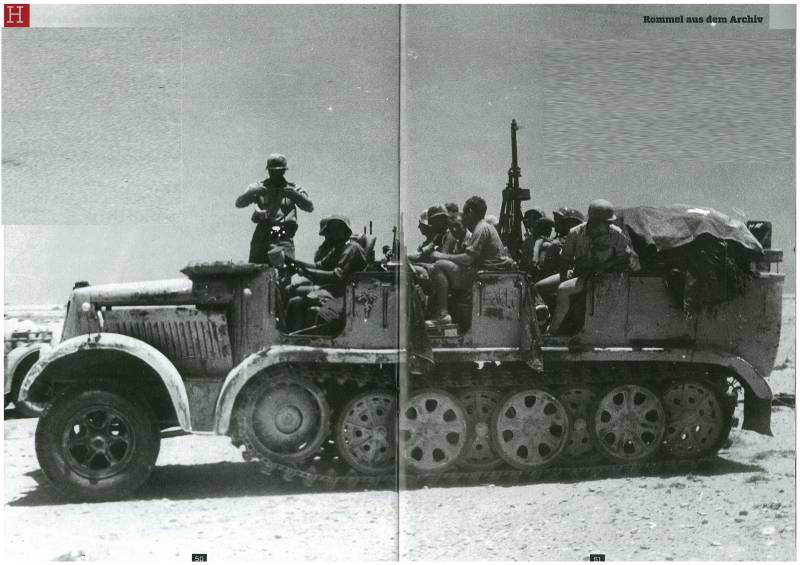 8-ton Sd.Kfz 7 tractor with the calculation of the Flak 36 / 37 gun. 10 people can sit in two rows on the rear benches, and the total passenger capacity can be 13 people. Although in a combat situation could go more. The 11,5 tons tonnage was driven by a 6-cylinder gasoline engine Maybach-HL-62-TUK with an HP 135 power. and could reach speeds of 50 km / h. The tank's capacity was 215 liters and ensured a desert cruising range of 100-120 km. (NARA / "Husar") 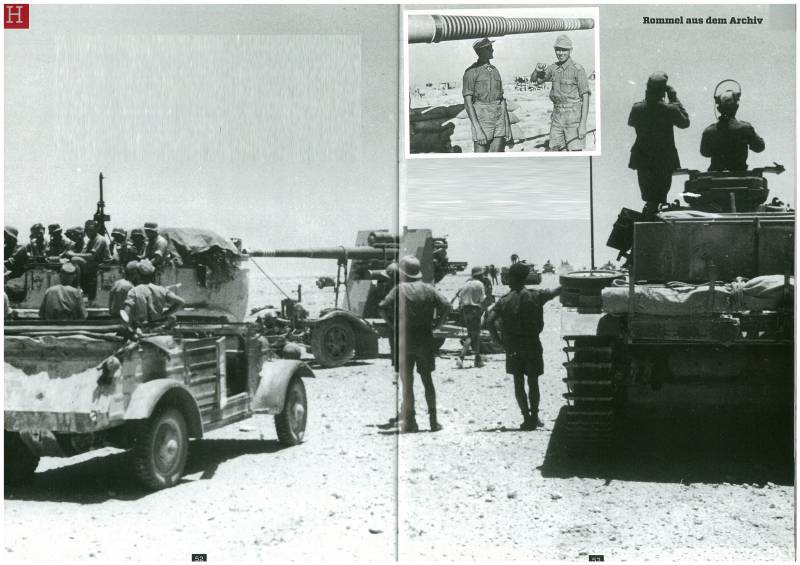 The same tractor as in the previous photo with the Flak 36 gun with five rings on the barrel, denoting five destroyed enemy tanks in the battles of Halfaya 16-18 July 1941. The British had high hopes for their offensive under the code name "Battle Ax", launched on the border of Libya and Egypt. After the loss of the 80 tanks, the operation was curtailed. One 8,8-cm battery of anti-aircraft guns destroyed eleven Matilda tanks from a distance of one kilometer in the battle for the Halfaya pass. After the first tank caught fire, the British did not understand what had happened and continued the offensive. Within the next ten minutes ten more tanks were lost and only one managed to return to the starting position. For this battle, the battery commander, Major Wilhelm Bach, was awarded the Knight's Cross of the Iron Cross. The soldier in the center is dressed in a tropical olive uniform and a tropical helmet. Subsequently, she was replaced by a more appropriate form with long trousers and long sleeves jackets.
Inset at the top in the center are two gunners with Iron Crosses next to the Flak 36 gun from the previous photo. On the trunk 44 rings for padded tanks. The first five are somewhat wider. They are known to us from previous photos. For some time this weapon was part of the 19 zenith artillery division in Tobruk and was lost in May of the 1943 th in Tunisia. (NARA / "Husar") 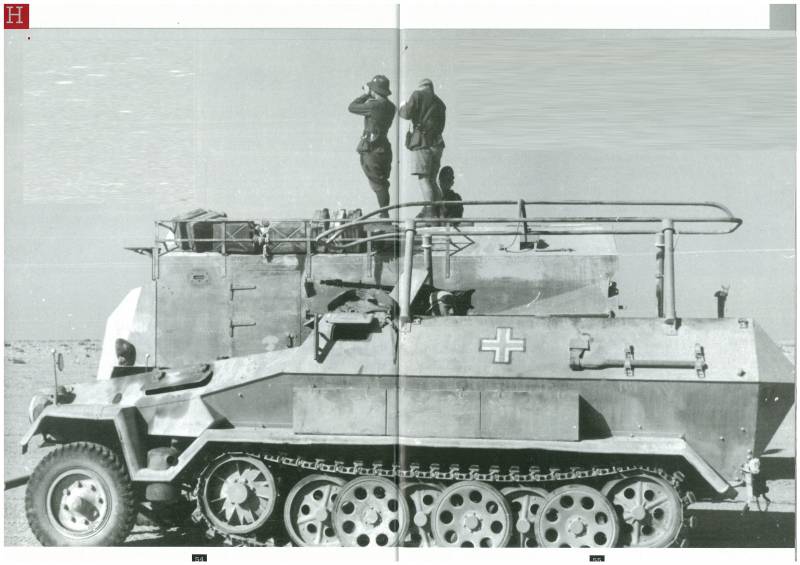 Rommel on the roof of his mobile headquarters. The photo was taken at the beginning of the company, as Rommel is dressed in a tropical olive uniform and a helmet. From the height of the roof of the captured command and command vehicle AES Dorchester with a height of 2,9 meters it was possible to see through binoculars much further than from the ground. This was especially useful in the morning mist or on a hot day when mirages arise over the hot earth. In the foreground, you can see the Sd.Kfz-251 / 6 command and headquarters, equipped with two FuG 5 radio stations with 4-5 km range and FuG 8, which is available on 40-50 km. (NARA / "Husar") 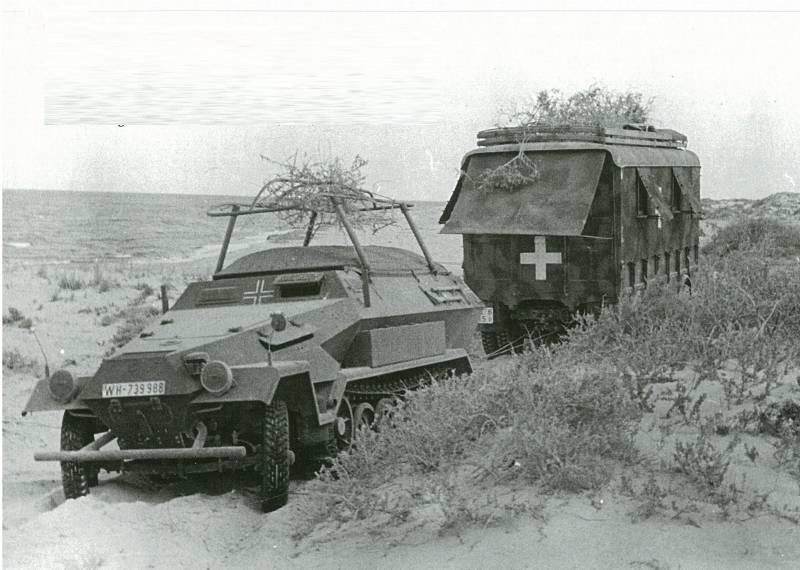 Rommel's first mobile headquarters was a trailer. He was often stuck in the sand, was unstable. The fact that his passengers were forced to "swallow" the dust from the tractor is not worth talking about. (NARA / "Husar") 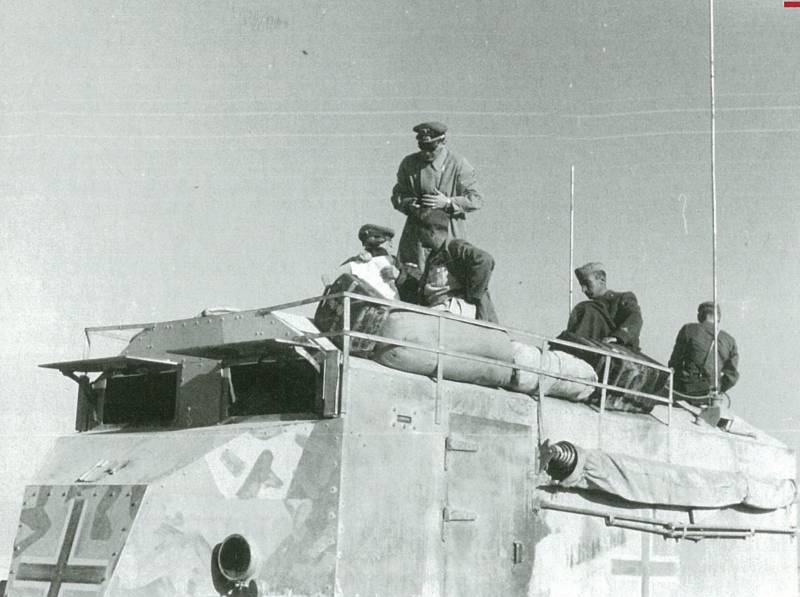 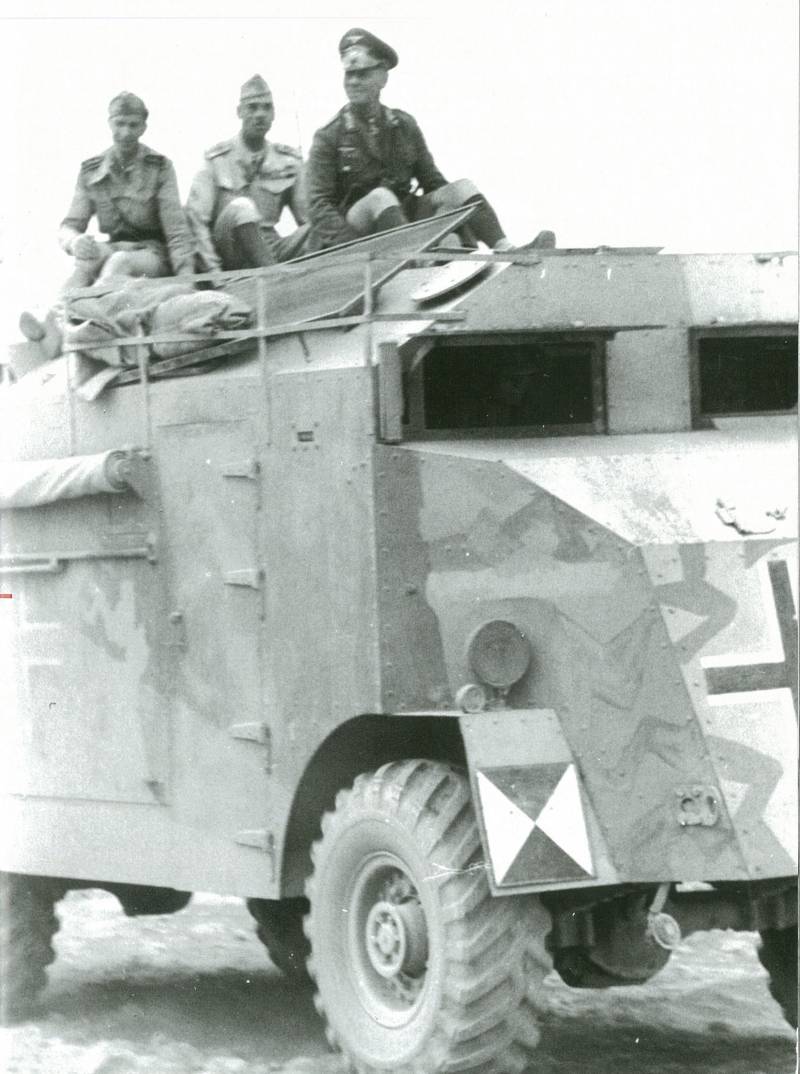 Three British AES Dorchester command vehicles were captured by a platoon of German motorcyclists stuck in a traffic jam off Dern during the British retreat from Mehili. Previously, they belonged to Lieutenant Generals Richard O'Connor, Philip Nimes of the headquarters of the 8th Army and Major General Gambier-Perry of the headquarters of the 2nd Panzer Division. In this sequence, they were designated with large white numbers "2", "3", and "5". Rommel handed over one of the machines to General Streich, and left the other two at his headquarters. General Stein was using car number 2. (NARA / "Husar") 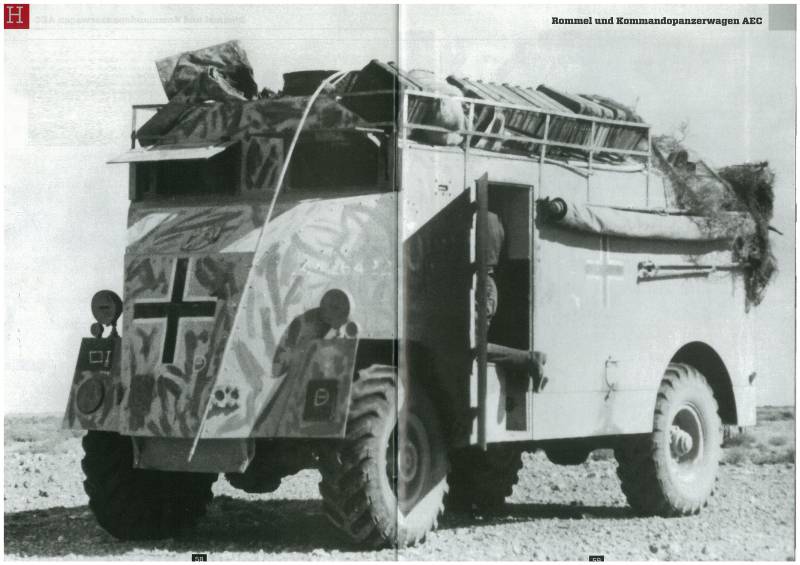 On this machine, you can still see the number 4426422 under the camouflage painted later. These cars were first called "mammoths" and then they received the nicknames "Max" and "Moritz", in honor of the heroes of the children's book. (NARA / "Husar") 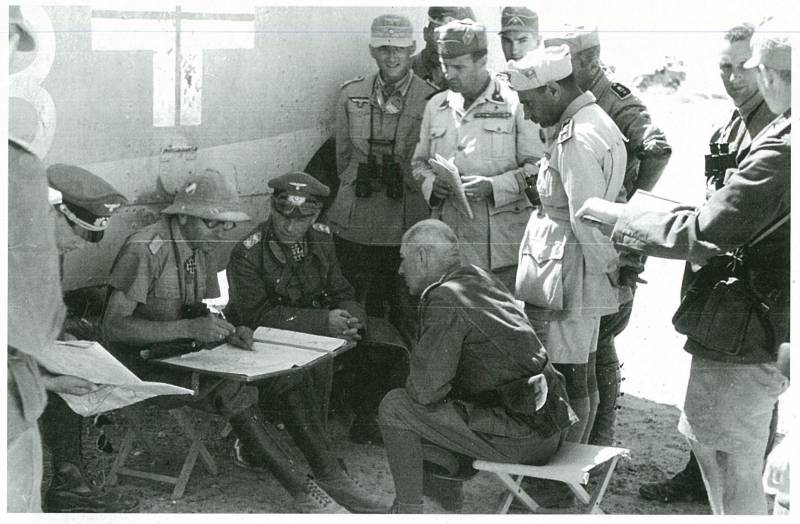 Rommel with his headquarters and Italian officers. The cross on board the car has very narrow black strokes in the middle, which is a rarity and was soon replaced by a more familiar one. There is no extra disguise on the car. (NARA / "Husar") 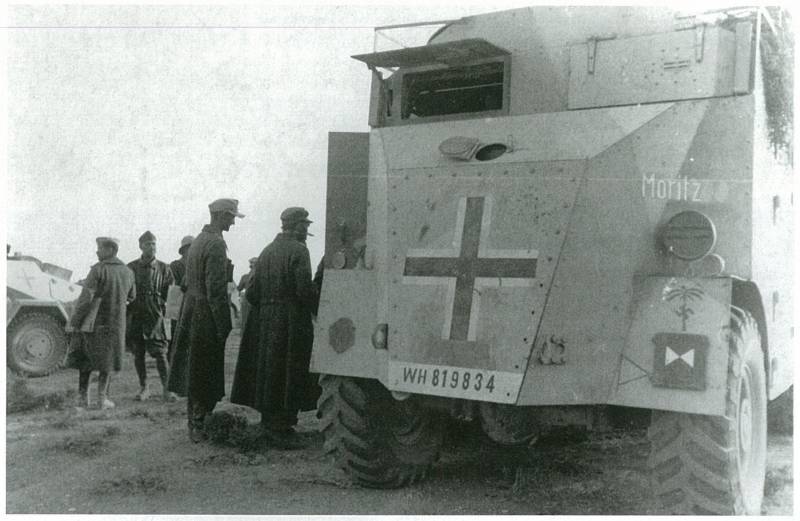 Rommel inspects AES with the number "5" and the name "Moritz". By car saved tricolor British camouflage only partially overlapped by German. (NARA / "Husar")

Both AES cars in one photo. Here they do not have proper names. On the left is Rommel's car, the future "Max." The right is the future “Moritz”, used by the headquarters, Lieutenant General Westphal and Major General von Mellentin. The motors of the cars were adapted for the use of German fuel. “Max” and “Moritz” survived the entire African company and were captured by the allies at Cape Bon.