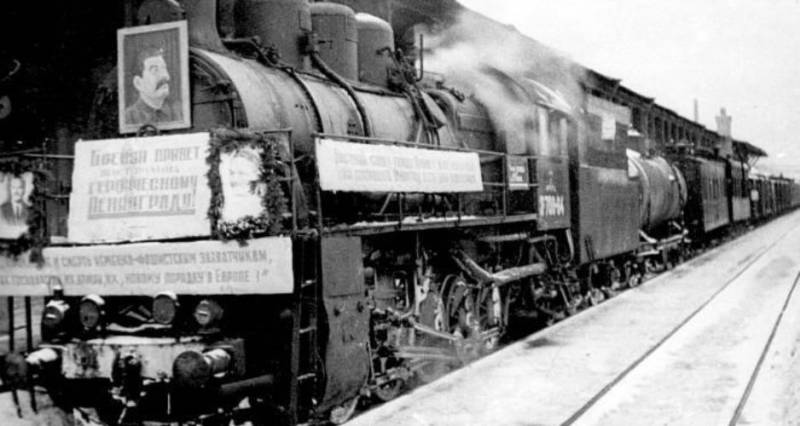 7 February 1943 of the year, just 19 days after the blockade was broken, the first train from Bolshoi earth arrived at the Finland Station still besieged by Leningrad, thanks to the 33-kilometer railway line built in record time.

The railway communication of Leningrad with the country was interrupted in August of 41, when the enemy cut the October highway, went to the nearest approaches to the city and closed the blockade ring.

The only thread that connected the northern capital with the Great Land was the legendary Road of Life. Millions of tons of cargo were brought to the Ladoga shore — food, fuel, and ammunition, which transported across the lake to the besieged city: in navigation — on boats and barges, in winter — on trucks along the ice road. This miser was clearly not enough for a huge city. At the end of 42, in order to increase the delivery of goods across Ladoga, they began to build a pile-ice crossing. By mid-January 43, she was almost ready. But not useful: 18 January 1943-th after a week of fierce fighting operation "Spark" troops of the Leningrad and Volkhov fronts joined together, breaking through a blockade ring - a narrow corridor about ten kilometers wide, which our fighters held for a year until the blockade was completely lifted. Because of this, there was a real opportunity to establish a transport conveyor to provide the city-front with everything necessary, of course, by military standards.

Already on January 19, military builders, railway workers, thousands of Leningrad women arrived on the left bank of the Neva River to liberate Shlisselburg in order to build a bridge across the Neva and a railway line as soon as possible in the cut-through corridor. From 33, eight kilometers from Shlisselburg to Polyan lay in the frontline zone, under the enemy’s nose. 5000 people chopped wood, made sleepers, brought soil from the nearest quarry in bags, as the machines could not drive through the swamps, laid the rails. And all this in January frosts, under the piercing Ladoga wind, with constant shelling. The sappers neutralized more than two thousand mines, hundreds of unexploded shells and aerial bombs. At the same time, construction began on a bridge across the Neva in the area of ​​the Staroladozhsky Canal. The width of the river there is 1050 meters, and the depth - 6,5 meters.

The first temporary bridge turned out to be 1300 meters long. In fact, it was a semicircular ramp frozen into the ice, facing the curved side towards Ladoga, facing the current - for strength. Worked around the clock and also under enemy fire. Now it is difficult to even imagine, although this is so - the bridge was built in 11 days.

February 2 overpass experienced, and 6-th, two days ahead of schedule, on it in the besieged city proceeded the first train from the mainland. On the train was reinforced poster "Hello heroic defenders of Leningrad!" And a portrait of Stalin.

A participant in those events, a veteran engineer, in 1943 - a representative of the People’s Commissariat of Railways in Volkhovstroi, and after the Great Patriotic War - Chairman of the Council of People’s Commissars of Karelia, deputy of the Supreme Soviet of the USSR Valdemar Virolainen told the VPK correspondent: “For the last 10 days I have been among the builders, and got on the first train at Mezhdurechye station. We at the depot organized a competition of drivers for the right to drive the first train to Leningrad. German batteries hit us all the time, but fortunately, not a single shell hit the train or the way. I had to stand at the left-bank station because the military was loading Tanks. And then I took control of the train in my hands. Itself crossed the Neva on the new bridge. Here I was met by Pavel Luknitsky, a war correspondent for the Leningrad Front. Back in April 42nd, dreaming of the future, I told him that the first train would lead to Leningrad, and he said: I will meet you. And so it happened. He climbed into the engine, we hugged, shed a tear. And then the train led to Mill Stream. In all settlements we were met. There was universal jubilation. We drove Rzhevka - actually a city line and arrived at the Finland Station - on the same platform on which I met Lenin in the 17th year in April. An honor guard from soldiers of railway workers, a brass band lined up on the platform. A lot of people. It was a real holiday ... "

The report on the arrival of the first train to Moscow and the whole country was conducted by the All-Union Radio’s own correspondent on the Leningrad Front, Matvey Frolov: “We were waiting for the first train at the Finland Station from the morning of February 6, but the meeting took place only on the next hour, 10 hours 9 minutes. In my notebook, a part of the text from the reportage was preserved: “The train is close, smoke is visible ... Listen, friends, a real train! It will take a little time, and somewhere at the station, the passenger will tell the cashier solemnly and joyfully: “To Leningrad!” And, probably, the cashier will smile at that moment and heartily congratulate the passenger. Yes, for a long time cashiers did not sell tickets to Leningrad. ” This is said on the day the first train arrives. ”

Each train from the Big Land transported more goods than the one-and-a-half day watch on the ice of the Road of Life (it operated until the spring flood - until the end of March 1943 of the year). In addition to fuel and ammunition, they transported wheat, rye, potatoes, canned goods, cheese, and other products to Leningrad by rail. And within a few days after the start of the railway traffic in Leningrad, the norms of food supply established for the largest industrial centers of the country were introduced. Employees of defense factories and metallurgical workshops began to receive 700 grams of bread per day, workers from other enterprises use 600, employees receive 500, children and dependents 400. Moreover, soon the city managed to create three-month, and even four-month stocks of products for grain and flour.

33-kilometer railway branch in Leningrad called the Victory Road. Each flight through the sweep through the corridor, under the fire of the enemy, in spite of him - was our victory and achievement.

Until the beginning of April, it was possible to carry out 7-8 trains overnight. And for the city and the front required at least 30-40 trains per day.

Immediately after the opening of the railway traffic and the commissioning of the Shlisselburg-Polyana line, they began to build a more reliable, not ice, but high-rise railway bridge across the Neva. It was built half a kilometer downstream from the pile trestle. A new ferry with a length of 852 meters and a height of just over 8 meters held 114 supports on piles. Ice defenses, booms from floating mines, which the enemy could have dropped from airplanes, were built around. They thought about counter-battery and anti-aircraft protection, even smoke of the crossing, which made it difficult for the enemy gunners to find their way through air raids and shelling. The design immediately provided for five 20-meter spans for small vessels and even one adjustable-span - for the passage of large ships with high masts. Motor transport followed the bridge, for this they built a flooring of logs. Contrary to all difficulties and losses, the crossing was built in a month and four days. March 18 installed the last span, and on the same day at 18 hours 50 minutes, the break-in train passed over the bridge. Regular traffic was opened at dawn, in 5 hours of 25 minutes of 19 March, after which the temporary pile-ice overpass was first wanted to be disassembled, but due to frequent artillery attacks, they were left as an understudy until the ice was opened on the Neva.

In parallel, over the swamps along the Staroladozhsky Canal - at a safer distance from the enemy - an 18-kilometer bypass line was built.

The most serious tests had to go through the railroad workers and the railway workers with the onset of spring, when erosion of the swampy soil began. In some sections, entire links plunged into the water and mud, so that the trains passing through them sometimes looked like steamboats. Drawdowns of the rails often led to self-uncoupling of the cars, and they had to stop the road. In March, the movement of trains was interrupted four times, in April - 18 times. More than 3000 people supported the track, sprinkling ballast at night, lifting and strengthening paths. In some places, the rails until the autumn frosts were flooded. The inspectors walked on the water, checking the joints, changed the bolts in the water, put the linings under the rails, checked the gaps ...

All those who served the Victory Road were transferred to martial law, they recalled qualified railway workers from the front. Among those who drove trains in the Sinyavinsky swamps was Georgi Fedorov: “At first, the trains went only at night due to constant shelling. But the front and Leningrad demanded more. It was necessary to bring food, ammunition, fuel. By March, the 43-I locomotive column of a special reserve set in motion on the front watch of 48. The trains went in the afternoon. Everyone who was on the train felt like a combat unit.

The firemen had to transfer cubic meters of firewood to the firebox by 140-150. And the shells were not afraid, although people died under shelling all the time. To more trains could pass on the highway, instead of the automatic blocking applied manual. All along were the attendants, with lanterns giving the trains a “green street” or a red signal. This allowed for increased throughput. So we worked throughout the entire 43 year, until the blockade was completely lifted. ”

And, of course, the vital highway to the city, passing along the very front line, could not work without a reliable defense. For a whole year, the fighters of the Leningrad and Volkhov fronts provided a strategic corridor. Expand it, despite the desperate attempts, and failed. Managed only to knock out the Nazis from the skyscraper, where there were observation points, corrected shelling of the track. Nevertheless, the plans of the German command to restore the blockade of Leningrad were thwarted, not to mention the fact that with constant attacks our soldiers forced the Fritz to divert considerable forces from other sectors of the front.

And the railway line lived, worked, bringing ammunition, fuel, products to the besieged city and ensuring the decisive offensive of January 44, as a result of which the enemy was thrown back from the walls of Leningrad. Every day the number of trains with cargoes for Leningrad and from Leningrad grew - on the way back from the besieged city, the trains did not go empty: they took out not only the sick and wounded, but also equipment, weapon and ammunition for other fronts that produced blockade enterprises. If in February and March 1943 of the 69 and 60 trains passed to Leningrad, then 157 was passed in April, 259 in May, 274 in June, 369 in July, 351 in August, 333 in September 436, in November - 390, in December - 407. About the same - in the opposite direction. In total, until the end of 1943, 3105 proceeded along the strategic path to Leningrad, and from it - 3076 trains. Almost 4,5 million tons of cargo were delivered to the besieged city, including 630 thousand tons of food, 426 thousand tons of coal, 1381 thousand tons of firewood, 725,7 thousand tons of peat.

And on February 23 of 1944, less than a month after the blockade was completely lifted, freight traffic on the main course Leningrad-Moscow was restored. March 20 again began to run the passenger train "Red Arrow". This could hardly have happened if the Victory Roads of 43 were not in the narrow corridor along Ladoga, repulsed by the fascists.