“Great Rifle US Drama” (Rifles by countries and continents - 5)

February 12 2018
9
As in this series of articles has already been noted, with quite decent carbines, the USA army did not have a decent modern rifle and was forced to be content with capsule rifles of the 1861 model of the year. But this does not mean that there were no specialists working in this field.

So, in 1859, Brooklyn gunsmith Bethel Burton patented a rifle with a sliding bolt, but could not attract attention. Then in 1861, he turned to the Confederation and was immediately arrested by federal marshals after he received an order from 40 000 rifles. After spending a year in prison, Burton reformed, took an oath of allegiance to the United States and became a "good citizen." In 1868, he modified his rifle, and now it became possible to use brass cartridges with caps of central combat, and again tried to attract interest in it both in the US and abroad. Demonstrating a rifle in New York State, Bethel Burton met General William G. Ward. These two people became partners and, using the military connections of the general, managed to interest the specialists of the Springfield arsenal. In 1871, Ward-Burton was the first rifle created for the US Army.

The Ward-Burton M1871 carabiner of the year.

The rifle was made chambered for Springfield .50 (11,4-mm) central combat. Locking was done by turning the bolt, and the lugs and reloading handle were located at the rear of the bolt. The lugs consisted of six turns of a large triangular thread, diametrically divided into two sectors (like the arrangement of piston valves of artillery guns!), Thanks to which the receiver was very technological. Drummer cocked while moving forward. In this case, the operation of the mechanism differed smoothly. The fuse in the form of a small lever was located on the right of the bolt carrier. The scope ensured firing 1000 yards. 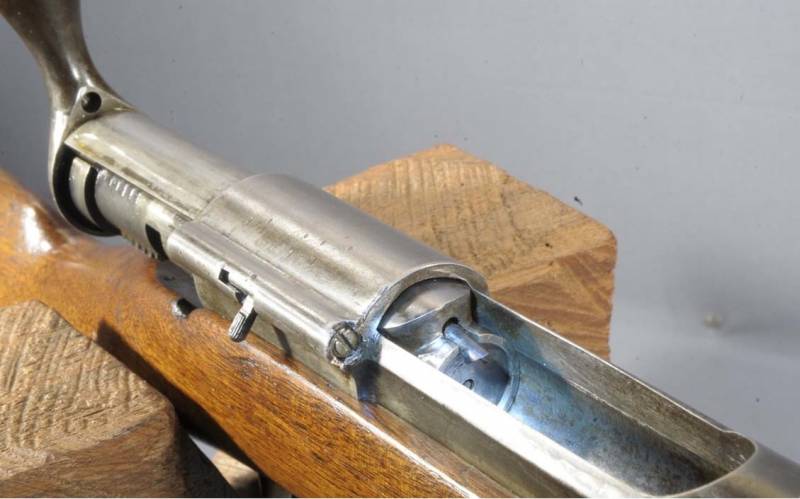 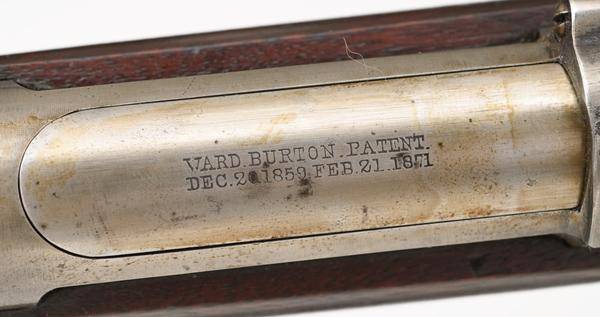 Mark rifle on the bolt.

A total of 1013 rifles and 313 Ward-Burton carbines were sent to the 13 Infantry Regiment and individual cavalry companies. The operation revealed, however, the disadvantage that the troops, unfamiliar with a sliding-bolt rifle, could not decide whether it was charged or not, which resulted in incidents with unexpected shots. And such a trifle as the absence of an external “indicator”, demonstrating whether it is charged or not, decided the whole thing. Therefore, the US Army has retained the more familiar Springfield rifle and the same carbine as its official firearm. weapons. 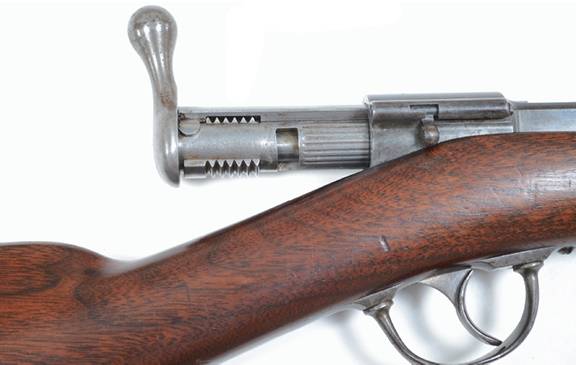 The shutter of the Ward-Burton M1871 of the year. 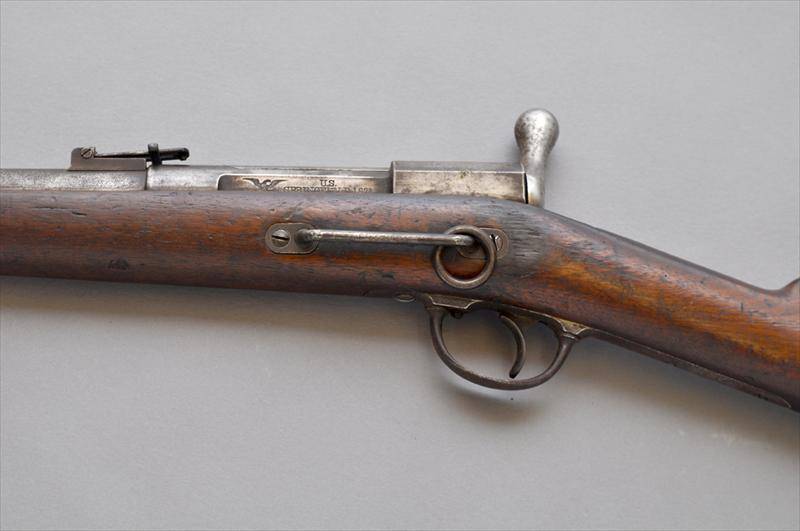 Carabiner clip and arsenal mark in Springfield on the M1871 Ward-Burton MX. 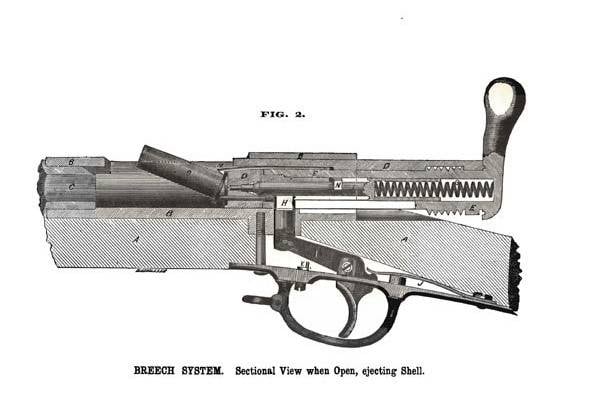 Meanwhile, as time went on, 1876 had taught the US military a lot of the year, and they decided to arm their army with store weapons.

Such was the rifle (or "musket", if we use American terminology) "Winchester-Hotchiss" arr. 1879 G., the first model adopted by the US Navy. All these rifles and carbines of the first model was made 6396. Of these, 5199 muskets, 812 carbines, 563 sporting rifles, and 1500 for sailors. Nevertheless, the army ordered all 500 rifles, China - 1000 units, Japan - also 500 units. Well, for familiarization purposes, they were bought by other armies of the world. 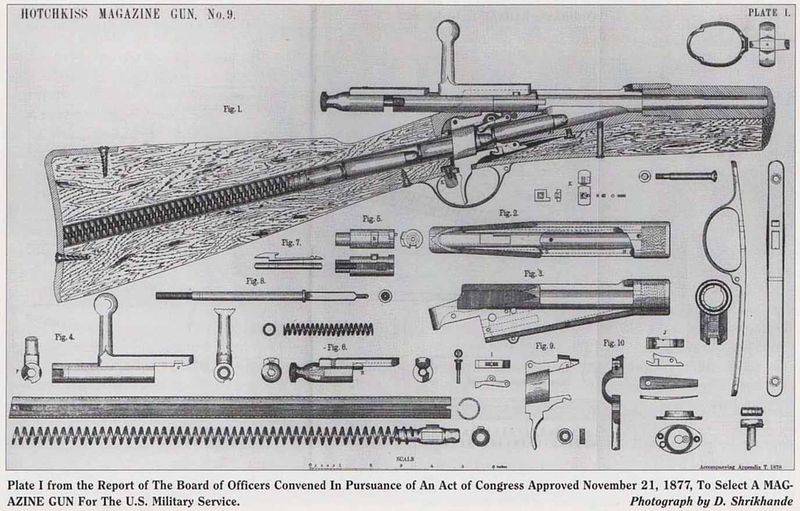 Chosen by the 1878 magazine rifle commission of the year, the Hotchiss system used a six-round tubular magazine, placed in the butt. He loaded the cartridges through the bolt carrier, that is, the cartridges were inserted into it with the gate open with bullets forward. Interestingly, the trigger had a wide ring that slid inside along the store. The store itself could be turned off. For this, there was a rotary switch on the right of the bed. The Winchester firm became the production shareholder, but the assembly and production of many other parts were carried out by the Springfield arsenal.

The 1879 model was produced in configurations "First Model" and "Second Model". Rifles were also released in the “Third Model” (sometimes called the 1883 model), but it found limited use.

Interestingly, today the carbines of this system are much more expensive than rifles, and their parts are almost identical. Therefore, some "smart people" have thought that they started buying rifles, shortening them, putting in a new forearm and getting a difference in the price of a carbine and a rifle. But fortunately, the serial numbers of all early carbines are known, so it’s not difficult for an intelligent collector to determine whether a particular carbine is genuine. This list of serial numbers is published in the list of equipping the US cavalry dr. Farrington There are also functional differences. For example, a ramrod rifle is one, but a carbine under the barrel of them ... two, and they are screwed!

Winchester also attempted to create a musket and a carbine for the army, but its 1873 models of the year remained unclaimed. However, the carbines of this model were purchased from Turkey by the company and armed by them their cavalrymen who fought with our cavalry during the years of the Russian-Turkish war 1877-1878.

Thus, the American army, as before, remained without a magazine rifle, and this “gap” in its armament tried to fill James Paris Lee, a Scot who naturalized in the United States. The first box store was patented by him in 1879, after which he had to plead with Ferdinand von Mannlicher for a long time about copyright infringement. It is believed that Lee was a British designer, as his name is included in the name of the rifles "Lee-Metford" and "Lee-Enfield." In fact, only his shop was used in these rifles, and Lee had a detachable one!

Immediately, we note that his rifle model 1879 "Remington-Lee" US Navy liked the fleet, but he didn’t have the means for production, and Remington began to fulfill the order, hence the double name of this sample. About 1300 of these rifles were made, and later a contract was signed for the 1882 model for another 770 rifles. Then there was the contract of the Navy for the model of 1885, according to which another 1500 pieces were produced. Among its features was the caliber .43 Spanish (11.15 × 58 mm R). In 1887, New Zealand purchased 500 rifles. 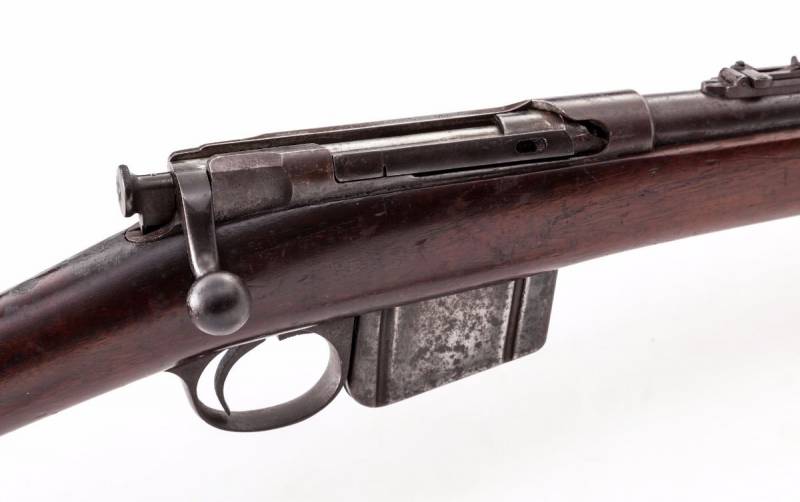 The shutter and the extractor spring on it, resting on the cut-out of the receiver.

Another experienced rifle tested at the time in the USA is the 1882 model of the Chaffee-Riza model. 753 such rifles were made in springfield arsenal in 1884 year. It was designed by Ruben Shipley Chaffee, and an interesting tubular store, which lacked a spring supply, became its feature.

Diagram of the device Chafi-Riza M1882

Instead, the store tube has two rails at the bottom: one with prongs (which moves) and the other with notches (which is fixed in place). It was all arranged in such a way that the cartridges in the store were fixed one after the other and, when the shutter was juggled, moved forward. That is, they had to be inserted from the front, but also from the back. Moreover, it was not recommended to insert one cartridge into the magazine. In order for it to fall into the chamber, it was necessary to distort the bolt five times! It is clear that all these "drag-and-drop" were too fragile to beat opponents with a butt, like a club, therefore they did not accept the rifle. 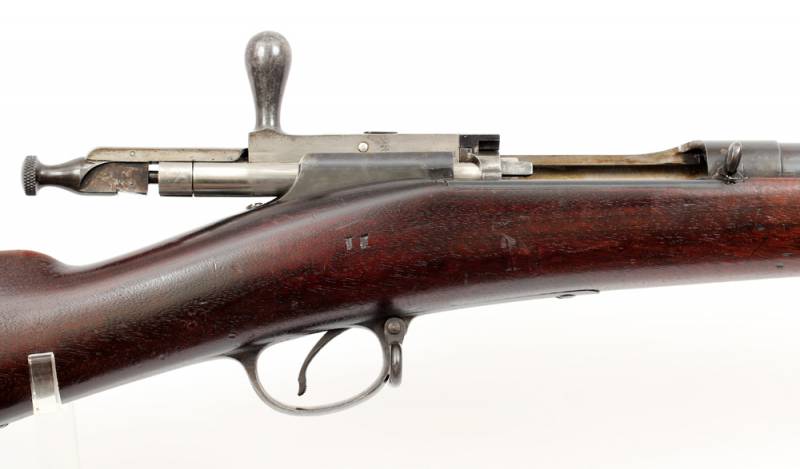 Chuffie-Riza rifle with an open bolt.

The Remington Keen is another experienced rifle with a tubular barrel. The Navy purchased 250 rifles for comparison with their 2500 rifles, Hotchiss and 300 rifles, Remington Lee, M1885. These rifles remained in service for about ten years aboard the Trenton and Michigan ships. In July, 1880, the United States Department of the Interior purchased 600 rifles of this type to arm Indian police in several states in the western United States. Rifles were made for civilian sales, had calibers .45-70, .40-60 and .43. The rifle's weight was 4,1 kg. The number of cartridges in the under-barrel shop - 9.

The design of the Keen's rifle had a number of interesting features that were not encountered in other rifles. For example, a sliding butterfly valve was provided with a trigger, which the shooter had to manually enter before the shot. Another feature of Keen's design was that his tubular magazine could be charged from two sides at once: either through the top with the shutter open, or from the bottom with the shutter closed, through a window with a spring-loaded lid. 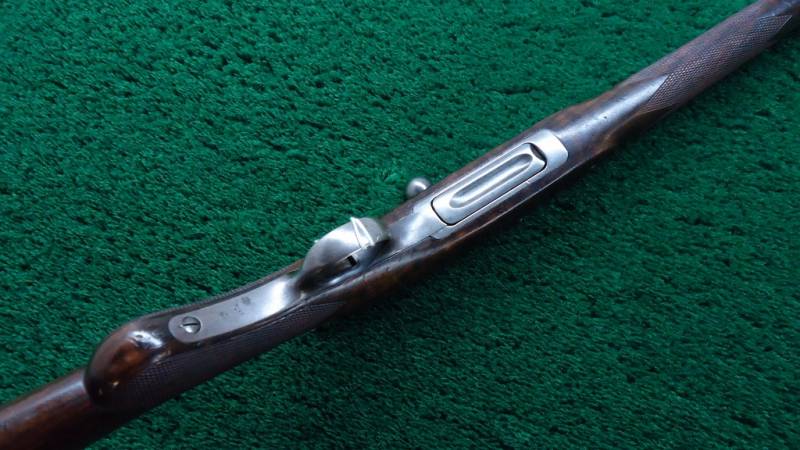 As a result, the “Great Gun Drama” ended in the United States only with the adoption of the МNNXX “Krag-Jorgensen” rifle. That is, even later than it ended here in Russia. That's how it is! 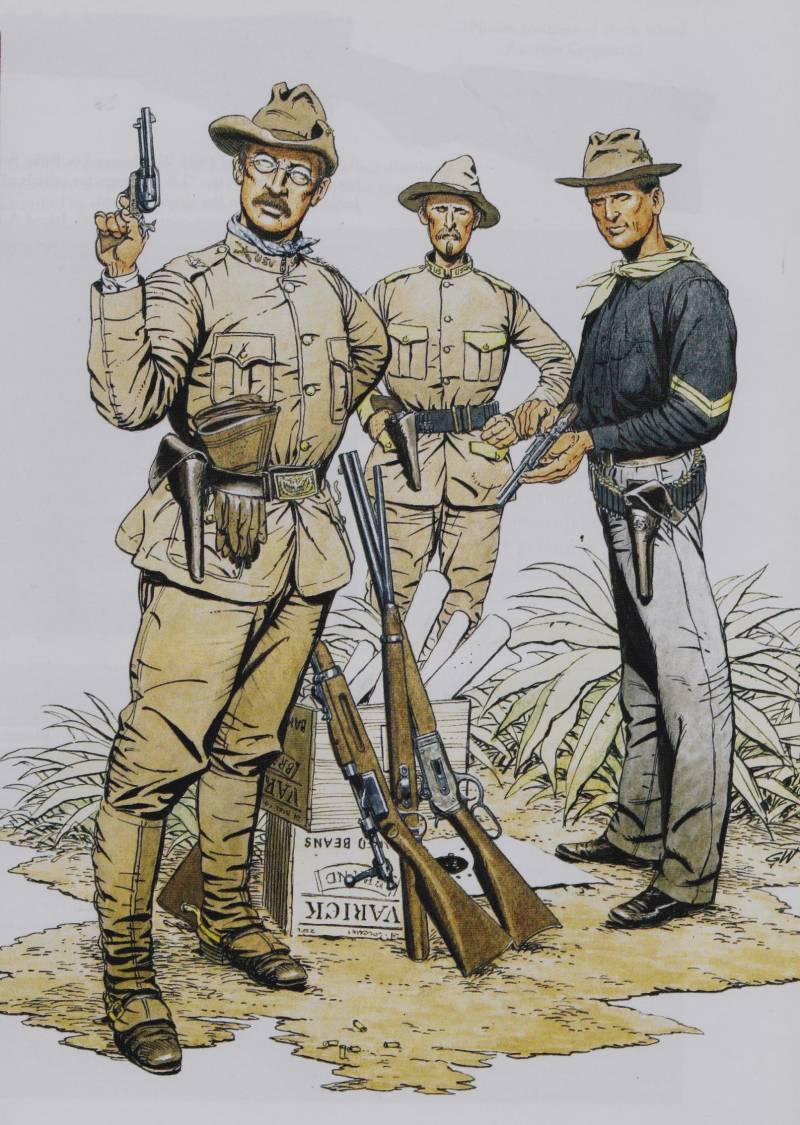 Soldiers of the American army during the war with Spain.

Ctrl Enter
Noticed oshЫbku Highlight text and press. Ctrl + Enter
We are
“Great Rifle US Drama” (Rifles by countries and continents - 3)What should be a modern sniper (part of 1)
Military Reviewin Yandex News
Military Reviewin Google News
9 comments
Information
Dear reader, to leave comments on the publication, you must sign in.