Knights and Knights of the Rose War era (part 2)

February 12 2018
28
And now let's see how the knightly armor used in England from 1460 to 1485 looked all the same. By the way, this is not an easy task at all, since they are almost gone. Therefore, we have to rely on those graphic sources that have come down to our time since then in order to try to reconstruct them on this basis. Something, of course, was made in England itself, most likely in London, since the armor was needed a lot, but a lot of the armor of the most varied quality was exported from Flanders, as well as from Italy, as discussed in part one. Based on the sculptural image of the Fitz-Herbert knight, made around 1475, the artist Graham Turner presented how the most typical (and quite wealthy!) Rose knight dressed in Italian armor might look like. 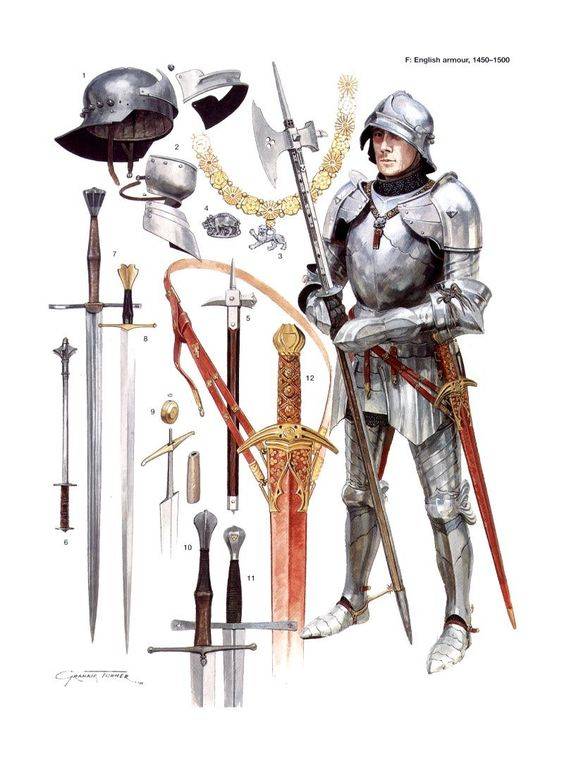 Let's start with plate shoes. “Sabatons” of his armor are made of overlapping strips, each of which is connected to the other with the help of a hinged-splined joint with a rivet. The Italian armor in this respect was distinguished by the presence of chain-weaved shoes. The knee pads were smaller than the Italian ones, and were made in the shape of a heart. The lower part of the cuirass was attached to the bib with the help of riveting, and not with a belt. "Besagu", or round shields covering the armpits, continued to be used, but on this armor Turner did not depict them. The wings of the elbow pads were then in the custom of making symmetrical.

Plate gloves are now also collected from plates riveted on the skin. Sometimes a reinforcing plate was placed on the left glove, since the shields were practically not used. Lats were made with grooved surfaces or if possible they tried to locate their parts at an angle. After 1470, the "tassets" began to partly overlap the abdominal instead of just hanging on its bottom edge. Around 1440, the English knights more and more often use a salad helmet, but differing in their appearance from the German helmet of this type. 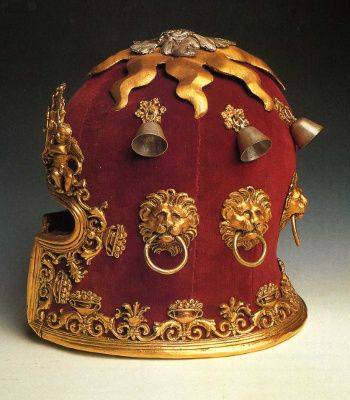 The helmet is a salad, covered with a cloth and with stamped ornaments riveted over it. (National Pinakothek of Siena, Italy)

And now carefully consider the other details that Graham Turner depicted in this figure:

Note that the weight of such armor did not exceed 25-35 kg. They could run, jump and fight with the sword on foot. Although the armor itself was made of soft and orderly slag iron, which the smiths did not have at that time, they were strong enough to protect their wearer from sword strikes.

What they couldn’t protect it from was overheating! The armor made heat exchange difficult, so the body of a person dressed in such armor quickly overheated and the knight could fight a banal heat stroke, which, for example, happened to Henry V's cousin, the Duke of York, who was found dead on the battlefield of Azencourt, but without a single scratch on the body! Even when the metal of the armor outside was cold in the winter, it was still very hot under him and the knight was bothered by copious sweat, but by removing them, he risked catching a cold immediately from the cold if he didn’t have any changeable clothes under his arms! 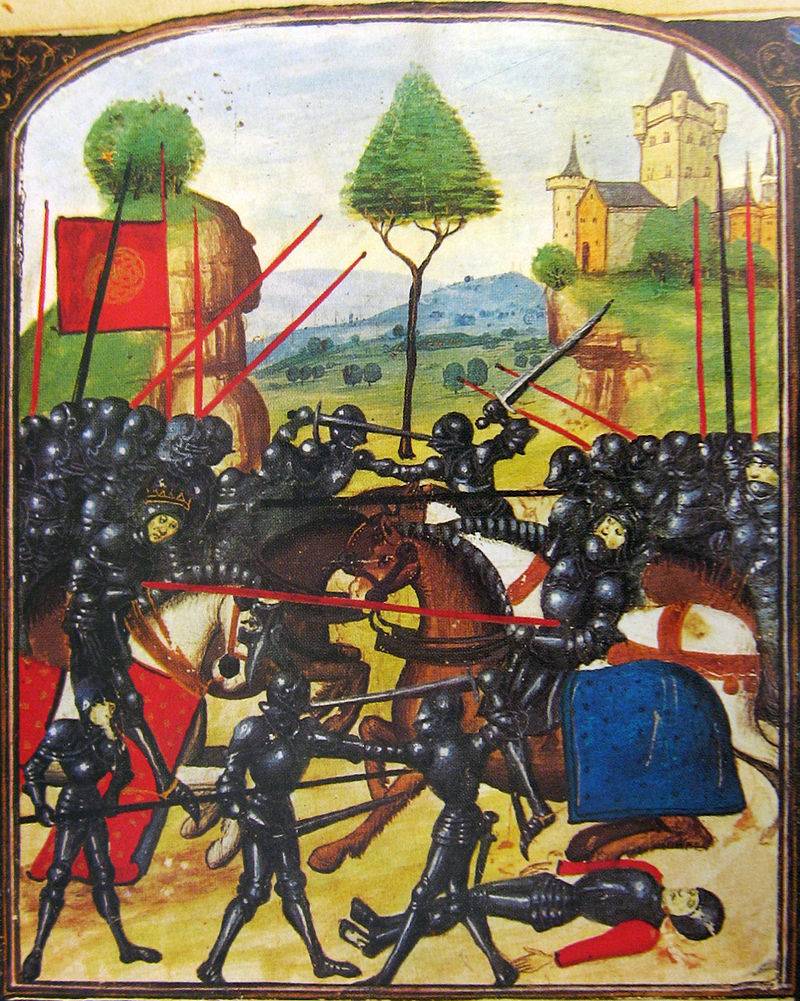 It is necessary to note the fact that the creators of the armor of the Rose War period paid much attention ... to the mobility of the shoulder girdle. Therefore, they preferred to make the cuirass not integral, but composite, consisting not of two, as we usually imagine, but of four parts: the two lower ones and, accordingly, the two upper ones. The upper ones were fastened with straps on the shoulders, under the shoulder pads, and under the arms, on the loops and straps. Lower - on the sides. Moreover, the upper and lower parts of the breastplate, without fail, came one upon the other, and the bottom always had to go behind the top and why, I think, that’s understandable. Between themselves, the parts of the cuirass were fastened in two ways - not the belts, which were located one in front, the other behind, and on rivets, which were located on the site of belt fasteners. 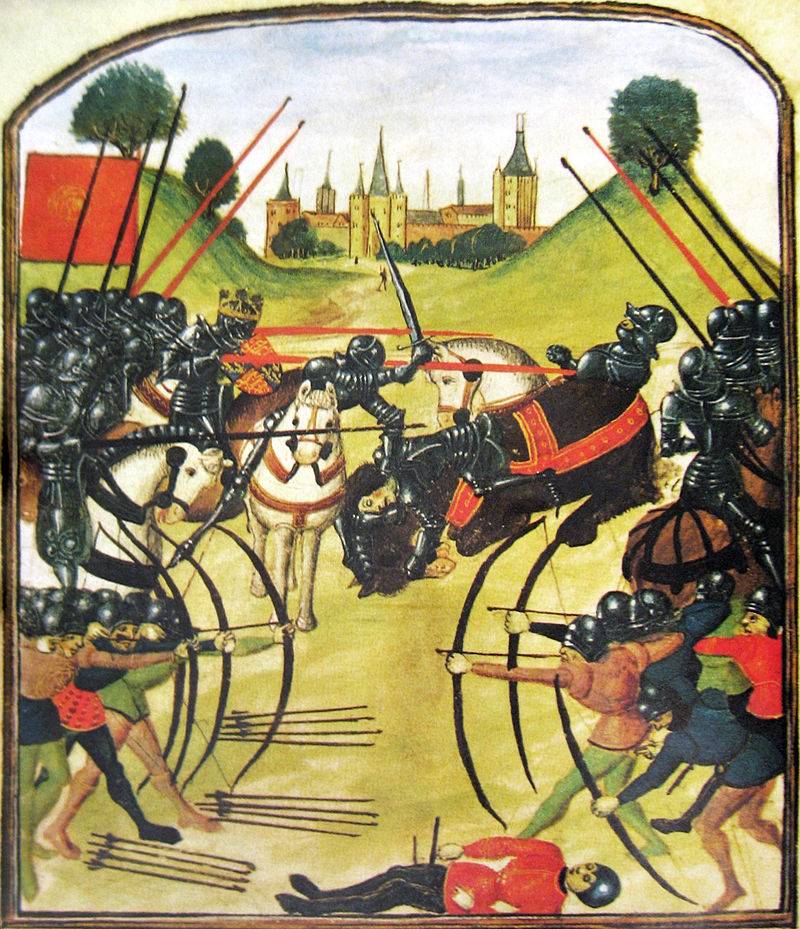 The Battle of Tewksbury (4 in May 1471) - a miniature from a manuscript, end of the 15th century. (University of Ghent Library)

Why was this needed? First, it turned out that the torso of a man was protected by spaced armor, and two layers of armor are always better than one! Secondly, there was an air gap between the sheets of armor and when moving through them due to the oscillations of the sheets of armor air leaks, that is, at least some ventilation was taking place not only from the head, but also the body. In addition, this, as already noted, increased the mobility of a warrior.

Again, the presence of four parts allowed us to dress two warriors in the armor at once! One was given the two upper parts of the cuirass, and the other - the lower two! It remained to wear them on the mail shirt, which the infantrymen usually did, and the warrior was already protected much better than if he would have had only one mail coat. That is, the money was paid for one set, and they were armed with - two!

Weapon knighthood remained at that time rather traditional, although the changes were undoubted. So the swords acquired a pronounced narrowing to the point and the rhombic shape of the blade. The length of some, according to Christopher Gravetta, reached 1.25 m, and they had not only a long blade, but also a corresponding elongated handle with a topping like a cork from a decanter. These swords are called "bastard" or "combat." Many such swords at this time received metal valves on the guard that did not allow water to get into the sheath. The middle part of the blade (ricasso) was not sharpened to the guard. This made it possible to take it with one hand and the other with the long handle and strike the enemy with a strong thrust that could penetrate his armor. And on the contrary, it was possible to take the blade-gloved hands with the blade and hit him with the hilt in the face, like a club, especially if he was wearing a barbut helmet, and the hilt of the hilt was discoid! 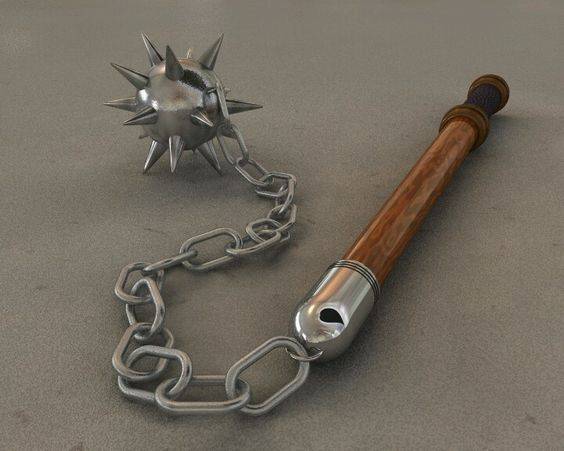 The battle scourge (or chain morgenstern) with a giant weight is a weapon for the master, as if misused to use it, it was easy to cripple. Replica. 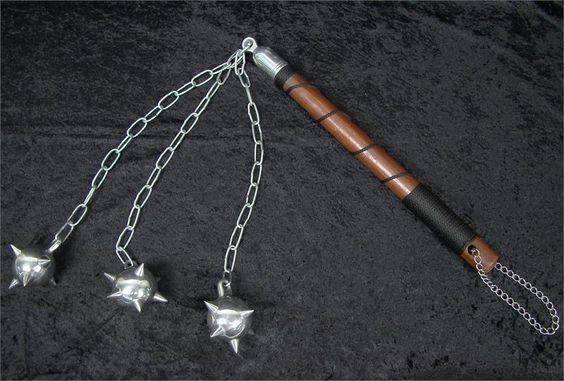 As an auxiliary weapon, axes, six-axes and “war hammers” with a beak on the butt or on the end were used. A popular weapon of the English knights, who increasingly fought on foot, was Pollex, or a hybrid of an ax, a warhammer and a spear. The combat pommel was fastened on the pole with the help of metal strips or “langetov”, therefore it was impossible to cut it with either a sword or an ax. The hand holding Polleks was defended by a disc-Rondel, onto which it was quite possible to take the blow of the enemy’s sword slipping from the LANgets. Some of these axes had sawtooth blades. Less common was the alspice — a short spear with the same rondel disk at the tip and, often, at the handle, and a four-sided awl-like tip. 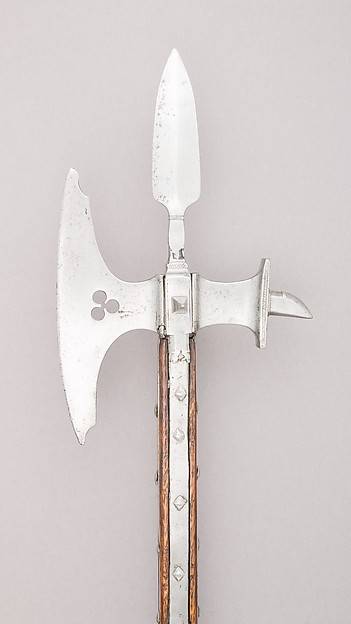 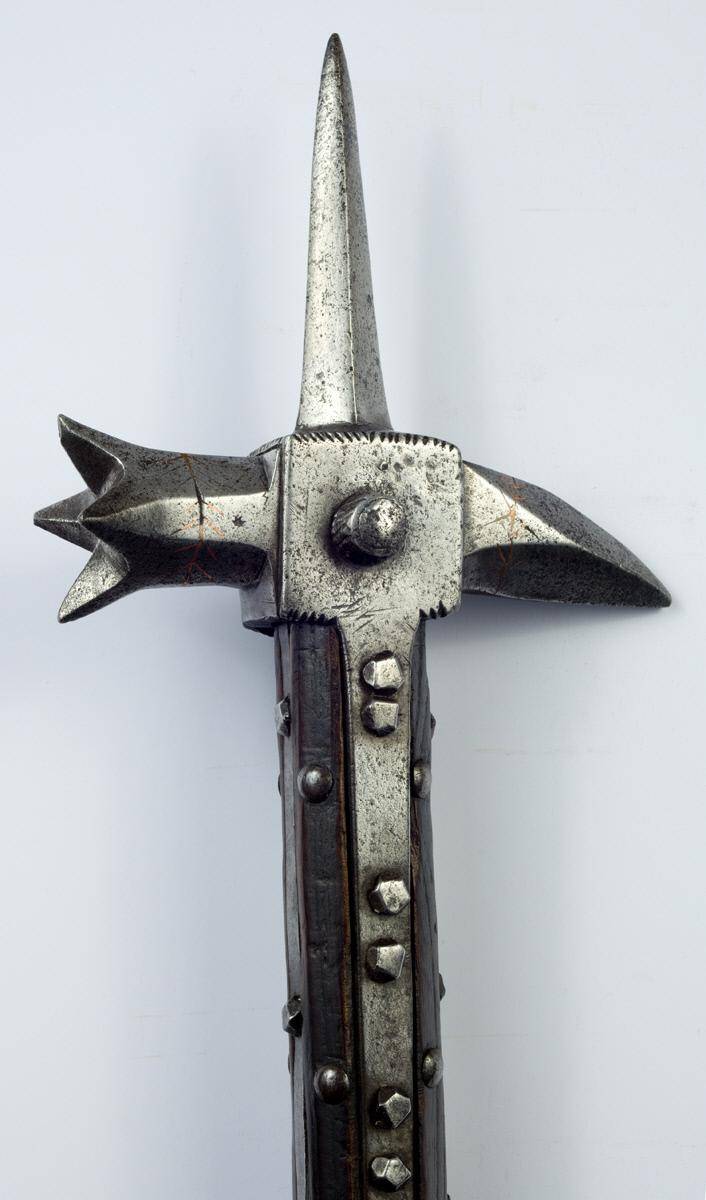 A knight could not fight without a horse, then he simply would not have been a knight, although at that time many knights had already fought on foot more often than on horseback. A good warhorse, however, was very expensive. The largest and mighty was the “destination” - from the French “right”. Why was his name so? And the thing is that since the horse was a noble animal, his servant could lead only with his right hand. There is an assumption that the horses were trained to take a step with the right foot. Destriers were highly valued, but it was not easy to raise such a horse. They were fed and trained, they developed viciousness and endurance. However, although they were very strong and strong, strength and power did not mean slowness. Moreover, they had the ability to turn very quickly and quickly. Destriers were always stallions, and their natural evilness and aggressiveness was taken into account in their preparation, so that in battle, knightly horses could bite and kick the enemy's horses and beat their hooves with infantrymen.

Those who could not afford the destrier could go into battle on the “course” - also a rather expensive warhorse, but still slightly lower in rank. Well, for traveling, an arrogant horse with a smooth gait was needed - “half-freedom”. Of course, if the knight was rich, then he had a lot of different horses: the “destrie,” and the sled, and the war horses. For knightly servants - "jacks", they bought horses, called "runse," or "ronsons." Slaughter horses called "Hack" or "Hackney" lord bought for other servants or hired soldiers. In the campaign, the knight required both mules and draft horses in order to draw carts.

Ctrl Enter
Noticed oshЫbku Highlight text and press. Ctrl + Enter
We are
Results of the week. “Look, the whole face is black! Have you ever read Moidodyr? ”Results of the week. "Well, do not change me because of every idiot!"
Military Reviewin Yandex News
Military Reviewin Google News
28 comments
Information
Dear reader, to leave comments on the publication, you must sign in.