Fiends on the Black Sea: the little-known crimes of the Nazis in the area of ​​Novorossiysk. 3 part

February 13 2018
6
The mass executions of Soviet citizens and the almost complete destruction of Novorossiysk of Jewish origin in October 1942, were only the beginning of the mass genocide of the population of Novorossiysk. The only thing that prevented the Nazi executioners, as well as the Jews, was to shoot the Russians, and that was the number and heavy fighting near the walls of the cement plants. In such a situation, it was difficult to divert significant forces for punitive actions. But the Nazis did not abandon their satanic idea. The genocide of the Russian people (as well as other peoples of the Soviet Union) was in no way inferior in its monstrous essence to the Holocaust.


In Novorossiysk, a whole series of Jesuit methods, characterized by systematic and cynicism, were used to exterminate the peaceful population of the city. Its main weaponsIn addition to the shootings and the gallows (which the reader finds out in a separate part), the Nazis chose hunger and plunder. These two satellites of war in this case were completely controlled by the Nazis. The rate on hunger and looting was win-win for the Nazis. This can be seen even now, when various pseudo-historians and pocket journalists are thinking about which cities they should surrender to “save the population”, they say, the Nazis are not to blame - it happened, after all, the war.

So what was this “war”? In the very first months of the occupation, the Nazis took all livestock and poultry from the local population. This banal robbery, which naturally caused an even greater wave of famine in Novorossiysk, was completely formalized by the order of the German command. Moreover, the Nazis motivated this inhuman action ... caring for animals. Yes Yes. "Enlightened civilized Europeans" with a fine mental organization allegedly could not see the suffering of domestic cattle left without feed. I see no point in drawing parallels with modernity - for this, probably, a series of separate materials about Western "civilizers" will be needed. 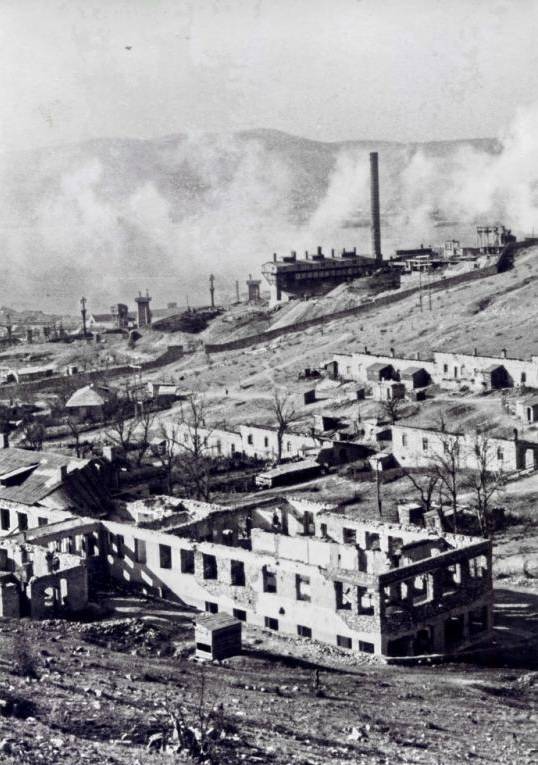 Ruins of the once industrial area of ​​Novorossiysk

“... three German soldiers armed with machine guns came to me. They took a cow, a goat, 10 chickens from me, as well as my and my husband's clothes. The cattle was stolen, and things were laid on a cart and taken away in an direction unknown to me. ”

The so-called “gendarme-police raids on guerrillas”, which, by the way, they had absolutely no connection with, were overwhelmingly popular with the occupying authorities, since the overwhelming majority of the Novorossiysk partisans were “front-line” acting army as guides, etc.). These actions were concluded that once in 3-4 of the day, the gendarmes, together with the police and Cossacks (you can't throw out a song from the song, more than one thousand Cossacks helped the Nazis to persecute their own people), carrying punitive-convoy service, cordoned off the "bazaar". “Bazaar” here means just a place where you could barter food, and this for many in those conditions was the only way not to die of hunger. After the crowd cordoning off, primitive robbery began again. For those who, after these raids, returned home empty-handed, this could well mean only one thing - starvation.

The author's grandfather, then another 14-year-old boy, also got into one of these “raids”. My grandfather’s family was large, but his mother was no longer a young woman and was constantly ill. The father, also an old man, was arrested by the Nazis - no one else saw him. The only breadwinner on that ill-fated day went to the "market" to exchange the sheets for something edible. Seeing the sheets in the hands of the boy, the Nazi patrol accused him of helping partisans (the sheets, as you know, were often used as bandages) and arrested. But grandfather was “lucky,” he was “only” slammed the door with a phalanx of fingers. Sheets, of course, taken away.

Another effective method of cultivating artificial hunger in the city was the “forbidden zones” invented by the Nazis. As soon as the Nazi Vorieu learned in which part of the city the most comfortable houses were located, where the production and technical elite of the local factories and the port mostly lived, they realized where they could live and at the same time reduce the number of civilians. Thus, the occupying power declared one of the wealthy districts "forbidden", then under the pretext of fighting the partisans, then for some other contrived reason.

In this case, the population was ordered to leave the “exclusion zone” within one or two hours. As soon as the quarter was empty, representatives of the “new Europe” broke into the apartments and houses. The goal of these bandit raids was only one - robbery. The list of what the Hitlerites and Romanians dragged along (who never missed the opportunity to poke) was also quite remarkable: furniture, samovars, gramophones, beds, carpets, sewing machines and musical instruments. Oddly enough, but representatives of a technically advanced nation with a powerful economy and autobahns did not disdain men's and women's underwear, pillowcases and pillow-caps from featherbeds. Even steam heating pipes were cut off. 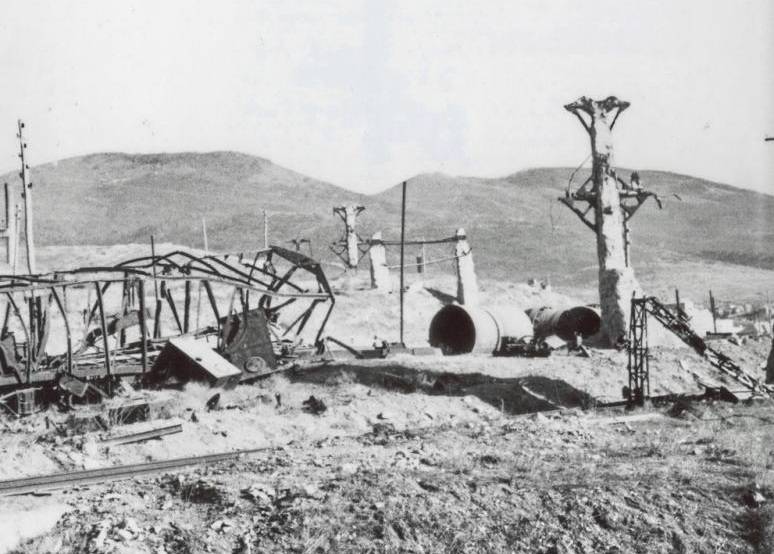 After the Nazis there was only a cluttered desert

When the quarter was “cleaned up” definitively, the Germans declared the next quarter a “forbidden zone”. And so on.

Fearing a rebellion during the mass robberies, the Nazis used every opportunity to drive the population out of their homes. Often, as I indicated earlier, Romanian allies were often involved in direct robbing. Tatyana Malinina, a school teacher at the Myskhako state farm, testified that almost all residents were driven to the center of the village to carry out one of the numerous public executions. That day the Nazis hanged two Soviet sailors. When the mockery was over and the residents were sent home, they found empty houses and carts of Romanian soldiers leaving the village, loaded with stolen provisions and other people's goods.

The results of the robbery were not long in coming. I will cite only some of the eyewitness testimonies of that monstrous famine, which was not yet known in Novorossiysk. Citizen Panchenko Evgenia Petrovna informed the commission:

“... the nutritional situation has deteriorated so much that they consumed rats, dogs and carrion, but they were not enough. The Germans selected not only clothes and valuables, but also food. In March, 1943, the Germans broke into my apartment and took 2 buckets of corn, which I traded in the village for the last valuable things. ”

“The population of the city when the Germans were starving, I personally fed on flowers from acacia, potato crusts and other garbage. In the first days of August, 1943, at the corner of the streets of the Paris Commune (note of the author - now the street of the Novorossiysk Republic) and Goncharov lay a dead horse. This horse gathered up 30 starving residents of Novorossiysk, wanting to get a portion of the dead horse. At this time, a German officer approached and hit a woman in front. The woman immediately fell, involving many. Coming to me, the officer hit me in the chest, I also fell. The officer broke up all the people ... "

Thus, the Nazis exterminated our people by all available means. And no matter how the current pro-Western ditches did not try to clean up the Nazis, the facts dipped them into their natural habitat. Just about these facts need to talk more often ...