Partizan with a misted sight 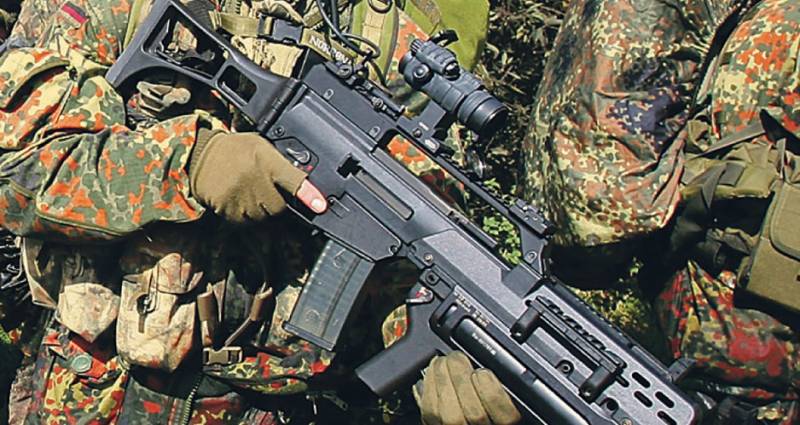 The Latvian military is once again rearming - a contract worth 13 million euros has been concluded for the purchase of army, civilian militia Zemesardze and the State Border Guard of assault rifles.

The German G36, according to the Baltic media, will be acquired from Heckler & Koch GmbH. Defense Minister Raimonds Bergmanis noted that the purchase of assault rifles and other weapons will allow the Armed Forces and Zemessardze to provide modern weapons meeting NATO standards.

With an American store

The piquancy of the situation is that these weapons, which seem to meet NATO standards and conditionally considered modern, have for some time ceased to meet the needs of their users. First of all, the Bundeswehr itself refused G36 - this was already announced in 2015 by the head of the military department of the Federal Republic of Germany Ursula von der Lyayen. “In agreement with the army leadership, it was decided to irrevocably draw the line. After almost using the 20-year-old G36, we want to equip the Bundeswehr with automatic rifles of a new generation, ”the Frau Minister said, noting that the claims are related to the incorrect operation of the aiming complex when the weapon overheats.

Indeed, the Zeiss collimator, which is equipped with a rifle, caused a lot of user complaints. They blamed the device for the tunnel effect - the viewing angle is small and in battle does not allow for normal control of space. The sight is equipped with a special system that provides natural light without batteries. Indoors it is necessary to include it, on what precious seconds are spent. Especially in the turmoil of the battle, you can easily forget about it. In addition, in the rain, the sight will fog up.

The store's latch also causes discontent - it is small and very tight, inconvenient when working in gloves. The shops themselves are made of fairly fragile, especially at low temperatures, plastic. It easily cracks, which in turn leads to a misalignment of the cartridge and delays when firing. Therefore, users prefer not regular, but made of aluminum shops of American manufacture.

Of course, these problems can be eliminated by upgrades performed at the level of military workshops, and they are no basis for abandoning G36. On the main reasons in the Bundeswehr try not to spread. The secrecy is explained simply: 167 of thousands of rifles, which will be withdrawn from the troops, need to be put somewhere. And while there is a hope to sell them to someone - the same Latvia, we must use it.

Previously, Heckler & Koch ran a very aggressive advertising campaign, sparing no expense for PR. Even Hollywood was connected to the conviction of potential consumers that the G36 is the best weapon in the world, since the weapon looks very futuristic. Even the famous American shooting instructor and expert Gabriel Suarez in the book "Tactical carbine" included this rifle among the best, pointing out, however, at its incredibly high price. However, Suarez most likely dealt with a civilian, self-loading version of the rifle, on which the main disadvantages of the device are less noticeable and not so relevant.

Cool in the heat of battle

German military began to express discontent with G36 after its first combat use in Afghanistan. In the 2009 year, when the soldiers of the Bundeswehr were sent to perform "international duty", mass complaints began that the rifles instantly overheat and fail due to jamming. It was reported that after shooting in short bursts of two or three stores, the accuracy of the weapon drops by a third. In 2010, a scandal broke out when German paratroopers were ambushed in Char-Dar. As established by the investigation, at least three soldiers were killed due to the failure of the weapon. The battle was captured in detail by action cameras mounted on the helmets of the soldiers, and everyone saw how one by one the rifles refused, and the paratroopers were forced to wait for them to cool down in order to resume the fire. The enemy, armed with Chinese AK, German fire did not cause serious damage.

It was impossible to write off the obvious unsuitability of rifles for the specific conditions of Afghanistan - it turned out that in Western Europe they work only slightly better.

The French Interior Ministry has procured G36 for the police special forces units, in particular for the Brigade anti-criminalite (BAC) staff of the brigade on the fight against crime. It was assumed that the special forces armed with the "best in the world" rifle would be superior to the terrorists who used AK in the Paris terrorist attacks.

It is extremely rare to think of a more benign regime of weapon exploitation than in the police special forces, where it works mainly at the shooting range and the range, on the road and there are no problems with regular cleaning and maintenance. But the French were disappointed. Soon they came to the conclusion: G36, showing quite decent results when shooting single shots, is completely unsuitable for automatic fire due to the rapid drop in accuracy when the barrel is heated and a tendency to failure.

Recall that the transition to the low-pulse cartridge 5,56х45 in Germany and in other countries was associated with a lack of accuracy of assault rifles using the cartridge 7,62х51 when firing bursts. So, in the Bundeswehr, the G36 replaced the G3 7,62х51 (by the way, a fairly reliable rifle). That is, the transition turned out to be meaningless for the German military - instead of advantages, they got a lot of problems. Moreover, the new cartridge was inferior to the old in power. And this is very significant with the massive use of personal protective equipment.

Recoilless machines do not happen

In the 2015 year, after giving up the G36 procurement, the Bundeswehr command ordered the 600 G27P automatic rifles, which were supposed to arm the fighters of foreign missions, for the transition period. That is, those who went to places where they most likely have to use weapons. This fact, which is the actual recognition of the complete unsuitability of a rifle and therefore not too advertised, is the last nail in the coffin of G36.

The inevitable question: why does the Ministry of Defense of Latvia buy a worthless rifle? Moreover, the military doctrine of a small but very proud republic implies a guerrilla war against the aggressor. It is obvious that with a weapon that turned out to be unreliable even for Parisian policemen, you will not be too much atrocious.

By the way in the Latvian warehouses there are still quite reliable AKM and AK-74, which Riga prefers to sell to Ukraine and the Middle East. The fact that this weapon uses a cartridge that is not standardized for NATO is not an obstacle - NATO, Poland, Romania and Hungary still use weapons of Soviet calibers. And in Bulgaria, AK is produced under the patron of NATO 5,56X45 and costs several times cheaper than G36.

You can, of course, assume that the innocent Latvians fell under the spell of the "Hollywood image" G36. However, before the conclusion of such contracts are usually carried out serious and rigorous tests. Yes, and the web to collect sufficient information about this rifle of labor is not.

However, marketers at Heckler & Koch are renowned for their ability to engage and persuade customers not only through aggressive advertising. Actually, it is addressed not so much to the direct buyer as to the public. After all, if you convince taxpayers that they have a “weapon of the future” in front of them, there is much less chance that deputies and journalists will start asking: “Why did you buy this stuff at all? Maybe they got a kickback? "

However, this is exactly what the Latvian journalists suggest. Republican media recall how they asked Minister Bergmanis for what purpose his department purchased the old Stinger MANPADS, powerless against the Russian aviation, with which Latvia is going to fight. Then he replied: “I am not an expert. But they are not only against airplanes. There are helicopters yet. And they are needed to protect their squad, it is a weapon of close action. I think they are very effective, there is no doubt about it. They would not have been produced if they had not been effective. ”

Most likely, a non-expert minister will explain the purchase of G36 in the same way. Moreover, he had already been caught buying optical sights at an overpriced price. Although Bergmanis is not an expert, he understands perfectly well that if Latvia decides to fight with Russia, it will be absolutely indifferent with what the soldiers of the "Homesard" - G36, AKM, M-16, or muskets of the times of John IV are armed with. And if there is no difference, then why not make it so that someone would feel good. For example, Heckler & Koch, the Bundeswehr armament service and the Latvian Minister of Defense?

What is great for a German?

The question is inevitable: what do they want to rearm the Bundeswehr with? The Heckler & Koch 433 is a modular compact assault rifle in 5,56x45mm caliber. The new machine, according to the manufacturer, combines the best aspects of the G36 and HK416 rifles and is positioned as a replacement for the G36.

HK433 is available in six versions, which differ in barrel length. The developers indicate that the new rifle is compatible with the accessories and some elements of the G36, HK416 and AR-15 machine guns (on the basis of which the army M16 and M4 are created). In this case, the arrows, previously used all of the above models, will be able to fully work with HK433, since their key elements (the store eject button, the fuse and the translator of fire) are located at the same places.

Weight HK433 ranges from 3,2 to 3,6 kilogram and depends on the length of the trunk. The machine is completed with regular 30-charging stores of the standard NATO STANAG 4179. The maximum rate of fire is about 700 shots per minute. HK433 is compatible with grenade launchers, including HK269 and GLM / GLMA1.