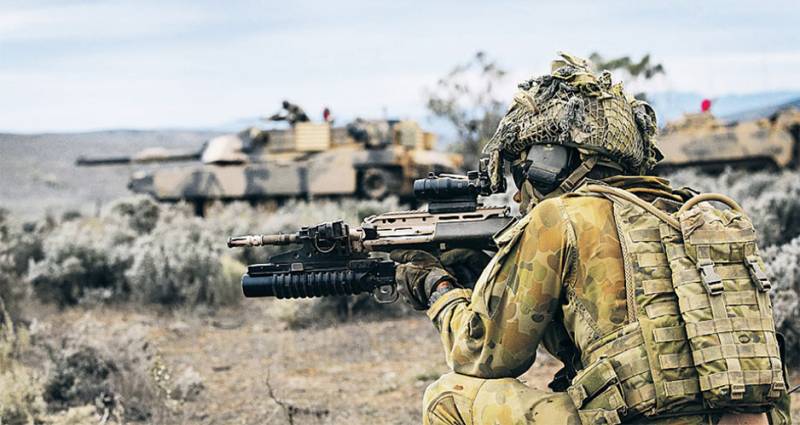 The main similarity of Australia and New Zealand is that their main defense is remoteness. Potential aggressors are simply too lazy to climb into such a wilderness.

Australia traditionally demonstrates maximum US loyalty, participating in all American wars, unlike most NATO countries. Its geographical position allows it to have a relatively small army, which at the same time has good technical equipment and a high level of combat training. Although American F-18 aircraft were delivered to Australia in the ground version, they can be used with American aircraft carriers. This was demonstrated during the second Iraq war. The country has a balanced ocean fleetwhose only weakness is the lack of aircraft carriers. Partial substitute for them should be UDC type "Canberra" of Spanish construction. It is planned to acquire new submarines and frigates equipped with SLCMs. The almost complete identity of the technology makes it possible to integrate Australian forces into Pentagon operations more easily than in the case with any other country, even Great Britain.

Ground forces have a rather complex organizational structure. The 1 Division is not part of the combat units. This is a staff superstructure in case of war. At one o'clock, brigades will be transferred from the combat command to the division.

Tank the park consists of 59 M1A1 Abrams transferred from the US Army. There are up to 186 ASLAV BRMs and up to 90 auxiliary vehicles on this base, 767 M113 armored personnel carriers, 1021 Bushmaster armored vehicles of our own production.

The Australian Armed Forces capacity is more than enough for defense and for participation in American military campaigns. In the future, the country can become a battleground between the United States and China. China is extremely interested in the development of Australia, which in some respects very much resembles Russia: a huge, almost empty territory and a mass of mineral resources. China's economic and demographic expansion in Australia is extremely intense, which the United States strongly discourages. Whether it comes to military confrontation is impossible to predict.

Recently, Australia decided to declare itself on the international arms market, promising to take a place in the top ten leading exporters (“The country of the kangaroo wanted to play muscles”).

Ship for the whole army

Due to New Zealand’s geographic location, invasion has never been threatened. Even in the first half of 1942, at the time of the maximum advance of the Japanese to the south, they had no real possibility of aggression. The population is very small, respectively, and the sun is compact, which are mainly expeditionary in nature. Being, like Australia, part of the western and Anglo-Saxon world, the country participates in some NATO and US operations, although it is clear that its contribution is modest.

The New Zealand Armed Forces fully meet their symbolic and expeditionary destination. Of course, they are incapable of protecting the country from external aggression, but its probability is zero in the foreseeable future.