February 2 2018
37
This scandal Polish politicians provoked last week. Under the mute "struggle against Bandera ideology," the Polish Sejm adopted last Friday amendments to the law on the Institute for the National Memory of Poland (Instytut Pamięci Narodowej - IPN). They provide for criminal prosecution for denying the crimes of the Ukrainian nationalists and their armed formations who collaborated with the Nazis. However, at the same time, the Sejm introduced punishment (in the form of a fine or imprisonment for up to three years) for spreading information about the participation of Poles in the Holocaust and using the phrase “Polish death camps”. 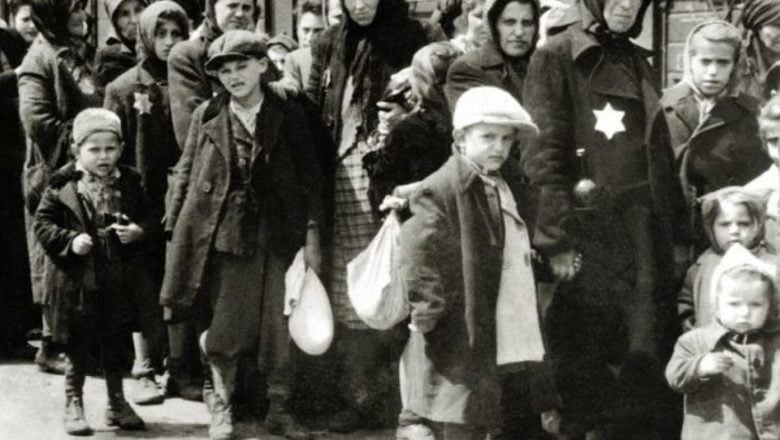 Responsibility for violation of the new provisions of the Law on the Institute of National Remembrance (IPN) Polish lawmakers laid not only on its citizens, but also on foreigners. First of all, it is a nod in the direction of the Ukrainians, played with the glorification of Bandera. The Poles are ready to persecute them not only on their territory, which greatly puzzled the Kiev ideologues of local nationalism.

For example, the director of the Ukrainian Institute of National Memory, Vladimir Vyatrovich, on his Facebook page was concerned that now, if he “wrote / said something wrong from the point of view of the Polish authorities, not even in Poland, IPN initiates a criminal case, and then even through Interpol you can apply for extradition. ”

Unlike Ukraine, Israel did not fear the new rules of the IPN law, but openly resented them. The categorical disagreement with the position of the Polish legislators expressed Israeli Prime Minister Benjamin Netanyahu, President Reuven Rivlin. A special statement was made by the country's foreign policy department.

The lawmakers in the Knesset are boiling over. The chairman of the opposition center-left Avoda party, Yitzhak Herzog, even demanded that the Israeli ambassador be recalled from Warsaw for consultations. “The Polish death camps existed, and no law will erase the memory of this,” wrote Yair Lapid, the leader of the Left Yeshid Party, on Twitter.

“The law considered by Warsaw will not change the past, but is dangerous for the future,” one of the leaders of the center-left Zionist bloc, Tsipi Livni, summed up the general outrage. Ten years ago, Livni was the head of the Israeli Foreign Ministry. Probably, the diplomatic experience made it apply to the law “considered” in the law adopted in the Seimas.

In Israel, they hoped that the odious amendments would stop the adoption of the law at other stages, for example, in the Senate. These were vain hopes. The Polish election 2015 of the year formed in fact a one-party government in the country when the Sejm and the Senate came under the full control of the right-wing conservative party Law and Justice.

Therefore, Israeli criticism only spurred Polish lawmakers. Already on Tuesday, the amendments passed the Senate without obstacles. The case was signed by President Andrzej Duda, who was elected, by the way, to this post, too, from the PiS party. It is unlikely that Duda will pull the final approval of the law.

The president has repeatedly spoken out on this topic and was outraged that the “Nazi death camps”, located during the war years on Polish territory, have recently been increasingly called “Polish.” Duda is especially reluctant to accuse the Poles of participation in the Holocaust - the mass extermination of Jews during the Second World War. He calls these facts "untruthful."

Crimes that are trying to forget


Someone agrees with the president. The world knows many facts when Poles sacrificed their lives to save Jews from the Nazis. During the war, the Nazis executed in Poland more than two thousand people who saved the Jews or helped them. The bright memory of these kind and courageous people.

However, there are more examples of the opposite property. This fall 75 will mark the anniversary of the uprising (October 14 1943) in the Sobibor death camp. For a year and a half (since May 1942 of the year), 250 of thousands of Jews have been killed here. At this time in Sobibor there were several attempts to escape the prisoners of the camp.

One such escape happened under the new 1943 year. Five Jewish prisoners fled the extermination zone. The Polish peasant saw where the fugitives disappeared and reported them to the police. The poor fellow was caught and executed. As an educational measure, the punishers shot several hundred more people in the camp.

During the famous uprising (the only one successful in the death camps) 340 prisoners escaped from Sobibor. The Nazis staged a real hunt for the fugitives, with dogs. 170 people found and immediately shot. The same fate befell still 90 escaped prisoners, issued punitive local Polish population.

Was in shameful stories Poland and the episode, similar to the massacre in the Belarusian Khatyn. He is well known. In July, 1941, in a small town of Jedwabnie (150 kilometers from Warsaw), a large group of Poles killed almost all Jews there. At first they were caught one by one and tortured, finished off with sticks, stones, chopped off their heads, sneered at the corpses. Then the rest (about one and a half thousand people) were driven into a barn and burned alive.

The property of the dead Poles appropriated themselves. This, according to historians, was a widespread phenomenon, when those who handed over the Jews to the Germans later became the owners of their property. German soldiers were present at the site of the massacre in Jedwabne. Taking advantage of this, the Poles blamed the tragedy on Hitler's punishers.

It was considered so until the 1990-s. New research confirmed the responsibility of the Poles for the massacre in Jedwabn. The Institute of People’s Memory of Poland generally agreed with these conclusions. True, IPN considered the death toll inflated and called his number - 340-350 people. However, in 2001, the then Polish president, Aleksander Kwasniewski, brought an apology to the Jewish people for this crime.

Andrzej Duda disagreed with Kwasniewski. Even during his election debates, he denied the participation of the Poles in the Holocaust, and called all the accusations of this a lie. Now the denial of the war crimes of the local Polish population is becoming the official state policy of Warsaw. Those who disagree with this will be “prosecuted” - fined or imprisoned.

The reason is serious, not to be interested in the events of the war and what the Poles were doing at the time. This topic has not been a priority for Polish society before. The authorities carried out 60 investigations in the 23 regions of the country on charges of crimes for the local population, but less than a hundred Poles suffered the real punishment. At this all calmed down.

Meanwhile, the War of the Army of Kraevoy against the Jewish population is awaiting its research. On her account thousands of ruined souls. The order of AK Commander General Bur-Komorowski (from 15 of September 1943 of the year) is known, in which local commanders were ordered to suppress Jewish partisan detachments. And the order was largely executed. Facts about this are in the publications of Polish historians.

The fate of the Jews and in post-war Poland. During the pogroms, only about the first year after the war about 400 Jews were killed. Sometimes, such as in August 1945 of the year in Krakow, the pogroms could be stopped only by the forces of the Polish and Soviet Army units.

A similar tragedy happened in the city of Kielce. Here, during the pogrom, about 40 Jews were killed (among them, children and pregnant women). More than 50 people were injured. Two Poles died in Kielce and tried to stop the pogromists. There is nothing surprising in the fact that the Jewish population gradually left Poland.

At first, they left in dozens, hundreds, then in the thousands. In September 1946, the Soviet Embassy in Warsaw reported to the USSR Foreign Ministry that more than 70-80 thousands of Jews left the country only from June of this year. The embassy found the reason for this outcome to be “anti-Semitic views” of the population, difficulties in determining employment, obstacles imposed on enterprises that “worked a significant number of Jews.”

If someone thinks that all these are events of bygone days, let him look at the data from one of the last censuses of the population of Poland. In 2002, the entire 1133 was counted here as a Jew. Before the war, they lived in Poland for more than three and a half million people. It was the largest Jewish diaspora in Europe.

Polish nationalism is becoming dangerous to the world. We see this from the frenzy with which the monuments and tombs of our soldiers are being crushed, intolerance towards the indigent migrants and temporary workers from neighboring countries. Now the turn has reached the Holocaust - the tragedy recognized as the most terrible genocide in the twentieth century.

Will the world keep silent this time, as in the case of the Poles scoffing at the memory of our soldiers-liberators, or shudder from indignation? On this depends not only the future behavior of Poland, but also the political prospects of the new Nazis, which are breeding today throughout the world ...

Ctrl Enter
Noticed oshЫbku Highlight text and press. Ctrl + Enter
We are
Warsaw accused Russia of falsifying historyResults of the week. "Well, do not change me because of every idiot!"
37 comments
Information
Dear reader, to leave comments on the publication, you must to register.