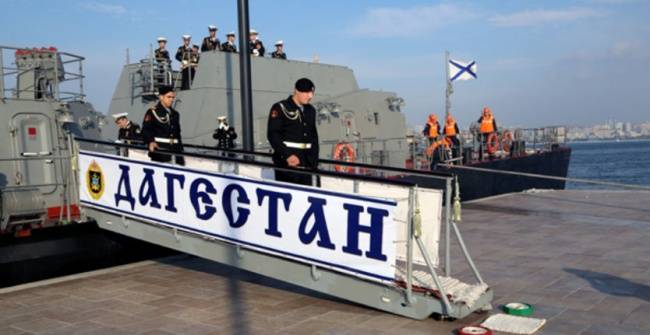 The ships were alerted to use and activated by means of electronic and visual disguise for disinformation of the air of the enemy. After detecting and identifying objects as a threat from air, the air defense calculations struck targets,
says release.

It is reported that "duty crews of more than 20 surface ships, boats and flotilla ships, including rocket ships Tatarstan and Dagestan, small rocket and artillery ships Grad Sviyazhsk, Uglich, Volgodonsk were involved in the exercise. , "Makhachkala", "Astrakhan" ”.

Also during the exercise, the "duty shift of the flotilla control center worked out for organizing the control of air defense forces and equipment while repelling enemy air strikes against basing sites and ships at sea." In addition, methods of targeting and setting fire missions in various communication channels to ships' air defense points were developed, they added in the district.

The press service added that these “training sessions are held as part of crew preparation for the forthcoming ship exits at sea, during which joint missile and artillery firing at sea, air, and coastal targets will be conducted, both as single ships and as part of the attack forces of the ships ".

Ctrl Enter
Noticed oshЫbku Highlight text and press. Ctrl + Enter
We are
New ships and missiles: the shock power of the Caspian flotillaMuscle shooting is not an obstacle
11 comments
Information
Dear reader, to leave comments on the publication, you must to register.