I do not want to such Russia, or Who will stop the Karelian mafia?

February 2 2018
167
Interesting things happen in a country called Russia. On the one hand, even irons and refrigerators talk about how we are stronger and prettier and how we will be even better after March 18.


On the other hand, in some regions, life turned out to be so beautiful that one can’t understand how great it is that up to the same Karelia there are more than 2 thousands of kilometers.

And, actually, what is there in Karelia?

And in Karelia, we have such a mess that just amazes. And it happens a long time ago. It recently came to the tragedy, as well as one of the leading bloggers, Sergey Kolyasnikov (aka Zergulio), has been fighting for quite a long time and is trying to help the citizens of Karelia.

This is not to say with success. Kolyasnikov is not Don Quixote, and it’s not the mills that oppose it. In general, those who are interested in the full picture, I recommend the page Sergey on the Internet. There are plenty of information, screenshots and copies of documents.

I, being limited to the framework of the article, will give a kind of squeeze.

Considering the weekly period I spent on familiarizing myself with the situation, this was the understanding.

In Karelia as a whole and in Petrozavodsk in particular, interesting things happen.

A group of persons, using privileged status, in simple terms, organized the robbery of the inhabitants of Karelia.

Of course, universal legal illiteracy played on their side, but in the first place - the complete patronage of all power structures, without exception. All

We are talking about a whole cohort of legal entities that work in the real estate market and deceive and rob people of Karelia with impunity. Under different signs.

Apartments that cost 2 million on the market cost people 3 as a result, or even 4 times more expensive. But it turns out, as they say, "in the course of the play." People cannot pay very heavy sums, return apartments - and still remain debtors, with the children find themselves on the street.

Not a single court in Karelia (and all the rotations around SANA and its offspring go more than one year) did not recognize any transaction as illegal or enslaving.

And at present, the housing business is conducted according to frankly fraudulent schemes, with forging signatures and without any chance of winning a case in court.

It's simple. All power without exception - "in the subject."

The prosecutor of Karelia Karen Gabrielyan, for example, calls for "not to politicize the conflict." He is convinced that these transactions cannot be called enslaving, and some intermediaries are to blame for everything. Against which a criminal case has been initiated and is being considered.

But not intermediaries brought to ruin and deprivation of housing and now to the suicide of the inhabitants of Karelia. And quite specific "successful businessmen."

And their names have long been announced. Yes, they do not hide. On the contrary, with enviable regularity they are shown in the courts, where they knock out “debts” from their clients and take housing from them.

This is, first of all, a certain Mr. Andrey Svidsky. The founder of a fair number of firms and individual entrepreneurs, including the most important robbers: Svidsky and SANA +. It is the responsibility of these firms, including for the death of a Petrozavodsk resident.

Svidsky has two hands. Brothers Shmaeniki. Victor and Anatoly. Anatoly Shmaenik is the brain of the entire SANA holding, but we are most interested in Victor.

Victor Shmaenik is a US citizen. In this, of course, there is nothing like that, US citizenship is not proof yet. Yes, Victor's children live there, and I think they live well.

But in 2008, Victor Shmaenik returned from the United States to get married. And here the most interesting begins.

I believe myself and I recommend others to believe what Kolyasnikov writes about himself. And he says that a disgusting situation has developed in Karelia. Which can be described as mafia.

And residents of Karelia can write complaints to various authorities as much as they like. It is just useless. Even Putin. By the way, Putin in particular. 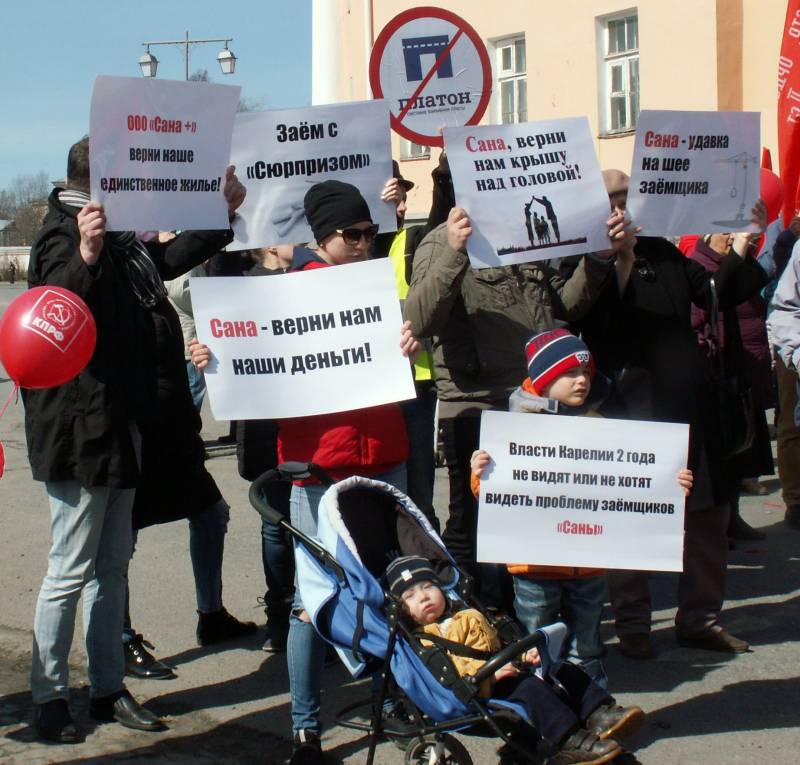 If for someone it is a secret, open it. If the complaint is received by the AP, it will be returned to the regional / regional administration for review. And go down by instance. Well, indeed, the presidential administration will not consider the stream of complaints that goes to Putin. Let's take it seriously.

And complaints will return to Karelia. Where everything is under control.

Here is the answer of the Deputy Prime Minister of the Republic of Karelia I. V. Shirshov. Two sheets of water, the last paragraph - on the topic. 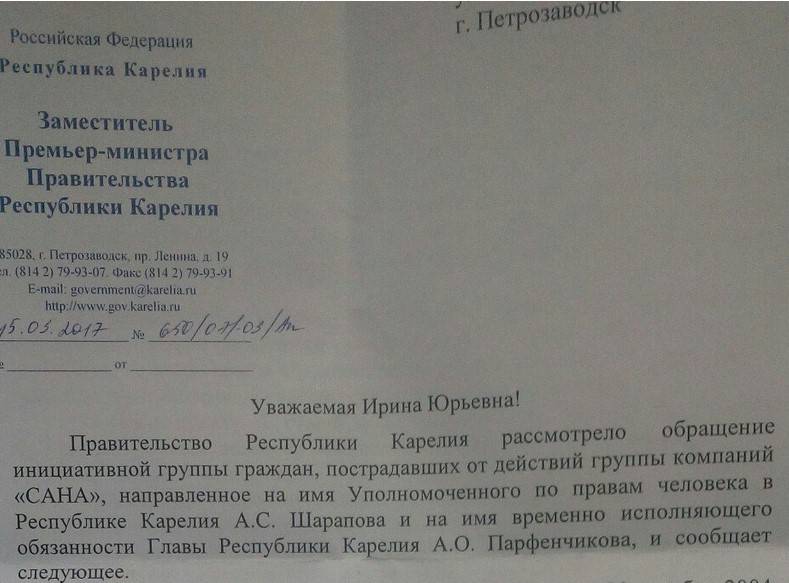 Prosecutor's office? But it was already said about the prosecutor of the republic Gabrielyan.

Courts? True, there is a rumor in Petrozavodsk that a deceived citizen won the court and got hers from Shmaenikov. City Court Judge ...

Even the Ombudsman of Karelia, Mr. Gennady Sarayev, is also in his own board. Since 2013, the head of the regional executive committee of the party ... United Russia!

Incidentally, in stories the suicide of the father of four children was also addressed to Sarajevo. The answer was: I keep the situation under control until the rights of the children are violated.

Indeed, while the children are not thrown out of the apartment, you can sleep well. Let's see what Mr. Saraev will take when it really lights up. And what will help children.

So far, the gentlemen Svidsky (Andrei, Nikolay and Alexander) and Shmenik (Anatoly, Victor and Olga) behave as full-fledged masters not only of their own lives, but of the whole republic.

And that, everything is under control. And the rest partigenos such as Sarajevo, Gabrielyan, Shirshov and other colleagues will continue to patronize the alliance of businessmen and politicians.

By the way, the press does not badly cover the case of suicide. Say, and the father of the deceased was not so hot (and in some cases, the father was not), and saw, and blasted ... As usual, by the way.

And the voices of relatives, friends, and (not least) children are so ...

Let me give you an example of one of those who are trying to achieve the truth.

The most vile in these stories: DESTRUCTION. You understand that you are nobody, zero. When Shmaenik realizes that a man goes to court, he tears off the mask of a good uncle and shows his true face. Court ... When I went to court, I was sure that I was a citizen of the Russian Federation, a patriot, I was born, I live, I’m raising my daughter in my small beautiful city. The court will protect me. I will pay a fine for canceling the contract and forget SANA, like a bad dream. But what is happening behind the doors of the court is the theater of the absurd, a show of freaks. Shmanyik is not only the director of SANA REAL ESTATE LLC (a million names using the word SANA), at the moment he is not the director of SANA + LLC, these rights have been transferred to Svidsky AA, but he is a representative in court from IP Svidsky A.A.

So, he shouts, waves his hands, gets dirty laundry from the depths of his folders. And in his hands is the main KOZYR: WE are defaulters, we are the lowest caste, we have no rights. He is the stricken side.

Therefore, he takes an apartment by court, keeps the amounts paid earlier, sues for reimbursement of court costs and has victims in everything that is possible.

Court decisions ... Also interesting. Many despair and finish everything at the city court, at one meeting. Longer rarely considered, because all the judges already know, matters as a carbon copy are considered since 2008, in large quantities.

What happens usually? People file for termination of the contract, are refused, they are charged with debt plus penalties.

The man moves out of the apartment, without a penny of money, on a removable ...

Not dozens. Hundreds of contracts. And no, I repeat, no opportunity to be heard. No opportunity to receive from the state what the citizen has the right to under the Constitution.

But no. And then there is only one question: what should happen to the situation suddenly changed?

There is no faith in the fact that the gentlemen “businessmen” Svidskys and Shmaeniki and their representatives who are in power will eventually get drunk. Money does not happen much.

Mr. Putin will intervene and short his officials (yes, they say that the head of the Republic of Kazakhstan is also “in the subject line”) with an angry cry? It is doubtful. There is still some way to reach Putin.

The vicious circle of deception, robbery and lawlessness. Under the strict control of the authorities.

Did Mr. President speak about this great Russia at the end of last year?

Something is not very desirable in it, to be honest.

Ctrl Enter
Noticed oshЫbku Highlight text and press. Ctrl + Enter
We are
Reports from the militia of New Russia for 27-28 September 2014 of the yearResults of the week. "Well, do not change me because of every idiot!"
167 comments
Information
Dear reader, to leave comments on the publication, you must to register.