February 2 2018
31
Anatoly Gritsenko, who previously worked as the Minister of Defense of Ukraine, came up with a “competitive” proposal: he appointed America as “candidate number one” for the supply of military equipment to Kiev. Think for money? Not really: either on lease, or for nothing. For some reason, the former minister didn’t tell about other “candidates”. 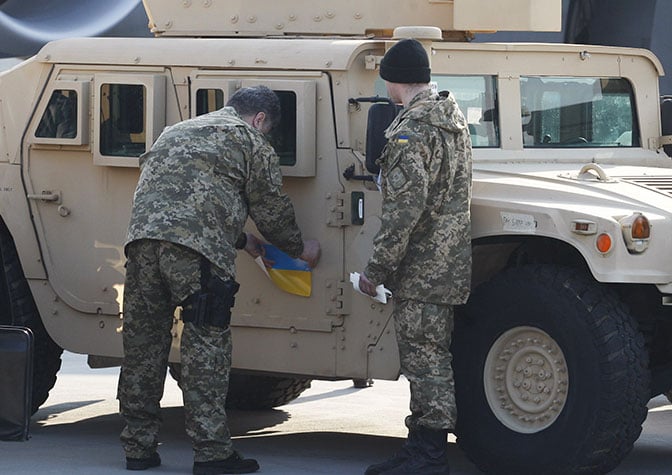 Ukrainian ex-defense minister Anatoly Gritsenko came up with a win-win version of military-technical cooperation with the United States. The APU needs to update outdated military equipment, which means that the United States should bring this equipment to Ukraine. It is impossible to allow that the Ukrainian soldiers used the equipment developed in the middle of the last century! The time has come to modernize the arsenals, the former defense minister has argued his proposal. Kiev has no other choice but to communicate its wishes to the West. "Western partners" are obliged to help.

Further, in his speech, which was broadcast by the TV channel NewsOne, the ex-minister narrowed the broad notion of "West" to the United States.

“The question arises: which country will go to a broader cooperation with us so that we have the opportunity [to receive military equipment] in the leasing mode, actually renting at the first stage, in the free mode for testing and testing, in the sale mode, co-production ... - quotes Anatoly Gritsenko RIA News". “And here the number one contender is America.”

Bach, and the challenger showed up! How did this happen? The applicant is, in fact, the one who claims something. Mr. Gritsenko seems to be an expert in mind manipulation and concept substitution. Because in this case he claims something. More precisely, Kiev. Claims for the supply of equipment - whether in leasing, or free. For Kiev, the first is almost equivalent to the second, for there is nothing to pay anyway.

Probably the reason for the speeches of Mr. Gritsenko was the information about the upcoming delivery to Kiev of thirty-five Javelin launchers and 210 missiles with a total price of 47 million dollars. "Javelins" will come to the people of Kiev this year. At least the Americans promise. True, Russia and the European Union simultaneously object to deliveries of the Javelins to the Kiev regime at the same time, but Washington’s relations with the first and the second are damaged, and you can spoil it further. But Ukraine is a loyal ally of America to the grave, and Ukraine should be supplied with military equipment for free.

On the other hand, there is still no exact date for Javelins, and therefore there is a big field for doubts and conjectures. how стало известно On January 31, Ukraine was visited by a special American inspectorate, which assessed the capabilities of the Ukrainian army in storing and using these anti-tank missile systems, but the results of the inspection are unknown. If the inspectorate considers that the Ukrainian armed forces should not trust things like “Javelins”, then there will be no supplies. The inspectorate from the United States came to have a look at the conditions in which the Javelins and their ammunition would be stored in Ukraine. Famous events in Balaklei, Kalinovka, Svatovo could lead inspectors to the correct idea: the security of warehouses is not so bad that things are bad, but worse than ever. And "in case of anything," a sharp question will arise: in whose hands will the Javelins fall?

Just in Europe, these "hands" and fear. Therefore, no matter how much the American Mr. McCain wants to arm Kiev, Mr. Trump would have better think about this topic. And pull with the decision until the end of his presidential term. And there, maybe, the warrior McCain will die - very old already.

As for the military equipment, free or almost free, which will be sent to Ukraine by the American “challenger”, Russian experts are ridiculing this idea.

Ivan Konovalov, director of the Center for Strategic Market Studies, commented on the idea of ​​Gritsenko as follows:

“In a country where civil war does not stop, we simply cannot talk about any leasing. Will they take it for a while, make war, and then give it back? ”

“Ukrainian military leaders,” he said. "Free Press"- As you know, they like to make amazing statements from time to time. But it is even difficult to comment ... When, for example, the Indian government leases an underwater nuclear submarine, this is understandable. They work on it. Sailors are preparing, officers are preparing. Then the boat is returned, but there are trained crews. And here what are they going to lease to Americans? F-16 fighters, which they immediately hit? .. "

As for the development by Kiev of its own defense industry, the expert does not see any achievements here. Sheer theft: “The problem is that the small money that they have or by tranches is transferred to them, they allegedly allow to strengthen the country's defense, but in fact they are simply being stolen”. And all the statements that the military-industrial complex in Ukraine is developing, new models are being created. weapons - "only empty bravado." Some “unsuccessful things” are created, the expert points out. They are shown to the public, and then "they are forgotten."

The deputy director of the Center for Analysis of the World Trade in Arms, Vladimir Shvaryov, recalls that the Ukrainian army was "brought up on Soviet traditions." That is, the Ukrainians "well mastered the Soviet-made weapons." “And I want to say,” the expert replied, “that even the old Soviet weapons are in good hands more efficiently than much more modern weapons, but on which the servicemen are poorly trained to work. After all, the effectiveness of any army and any military operations is not about who possesses more modern weapons. And in the one who is more trained to fight with the weapon that is available. ”

"If, for example, the Ukrainian army has Javelins, and the militia are some RPG-7, but are more trained to use it in armed confrontation, then any, even outdated weapons, will always win modern."

In addition, we add thirty-five rocket launchers and two hundred and ten missiles (and this is still questionable) will not be a turning point in the rearmament of the Ukrainian army. Neither Javelins, nor their ammunition, nor other military assistance from the United States (on the whole insignificant) will change the situation in the Armed Forces of Ukraine. Fully re-equip the Ukrainian army with the systems and equipment adopted by NATO is worth the money, about which it makes no sense to even talk. For example, the media Reported on the allocation to Ukraine of 350 million dollars of military assistance. However, with this money you can buy about three and a half military aircraft. And that’s it. But by air, tanks and rockets must still be able to use. Training, repairs, maintenance cost extra money. Kiev doesn’t have them, and no one will be ready to arm Kiev - neither the United States nor the other “Western partners” that Gritsenko spoke about. Ukraine with its passion for free weapons truly inspires fear.

Observed and commented on Oleg Chuvakin
- especially for topwar.ru
Ctrl Enter
Noticed oshЫbku Highlight text and press. Ctrl + Enter
We are
Weekly summary (30 January-5 February) on the military and social situation in the DPR from the military officer "Mag"Situational analysis of the death of the MH17 flight (Malaysian Boeing 777), made on the basis of engineering analysis from 15.08.2014
31 comment
Information
Dear reader, to leave comments on the publication, you must to register.