The most expensive seaplane in the world. ShinMaywa US-2 (Japan)

February 2 2018
25
Today in the world there are not many countries that can develop and produce seaplanes, but Japan is one of them. Currently, the Japanese Naval Self-Defense Forces use ShinMaywa US-2 multi-purpose amphibious aircraft for their needs. As part of the marine aviation fleet there are five such aircraft. In 2013, the Japanese government funded the purchase of the sixth ShinMaywa US-2 seaplane worth 12,5 billion yen (about $ 156 million), which makes the US-2 the most expensive amphibious aircraft in the world.


At present, this seaplane is actively moving forward for export, and there is interest in it on the international market. Subject interest in the seaplane show India, Indonesia and Thailand. India was the closest to the purchase, the Japanese seaplane won the tender for the supply of an amphibious search and rescue aircraft in 2014, in total, India could purchase such aircraft from 6 to 15, but the deal has not been concluded so far. In January, 2017 showed that official Delhi scared the cost of a Japanese seaplane, which ShinMaywa called the best in the world, is worth mentioning. In terms of seaworthiness, none of the modern production seaplanes can argue with the Japanese development.

Interest in the rescue version of the ShinMaywa seaplane US-2 in June 2016 of the year was shown by Thailand. In the same year, but in August, representatives of the Indonesian Defense Ministry held a meeting with their Japanese counterparts to discuss the purchase of military products, including the amphibian US-2. Indonesia was also interested in this plane in the aspect of conducting search and rescue operations at sea. At this circle of potential buyers of the Japanese seaplane so far ends.

ShinMaywa Industries has quite a long time. history and vast experience in creating amphibians for various purposes and sizes. The company was founded in 1949 year, while it became the heir of another Japanese aircraft manufacturer - Kawanishi Aircraft Company, which by that time had already become famous for its large flying boats, turning into a versatile industrial conglomerate and one of the flagships of Japanese industry. During the Second World War, it was the main supplier of flying boats for the Japanese military, its engineers had designed a giant seaplane H8K "Emily", which was recognized as one of the best flying boats of those years.

Since then, ShinMaywa has successfully retained its unique specialization in the field of hydroaviation. It is worth noting that this is a fairly narrow niche on a global scale. In 1962, the company began testing an experimental four-engine turboprop flying boat UF-XS (brand designation SS1), which was distinguished by the presence of an innovative boundary layer control system on the wing. In the UF-XS flying boat, a two-jet wing with slats and two-section flaps with a boundary layer blowing system was used. The implemented system of blowing the boundary layer provided the aircraft with better control at low flight speeds, including during takeoff and landing. To increase the stability of the wing floats were installed. The boundary layer blow-off system is still a proprietary feature of the ShinMaywa seaplane. The developer of the UF-XS aircraft was the creator of the former large amphibious aircraft from Kawanishi, Shizuo Kukihara.

After that, on the order of the Japanese Self-Defense Forces on the basis of the UF-XS, a large antisubmarine four-propulsion turboprop flying boat PS-1 (brand designation SS2) was created and mass-produced. From 1967 to 1978, the 23 aircraft of this type were assembled in Japan. Based on this seaplane, a US-1 / US-1A (SS2A) search and rescue version was created, it was mass-produced from 1975 to 2004, during which time 20 aircraft were built, only by the end of 2017 of the year . The new ShinMaywa US-2 flying boat is the most modern modernization of the US-1A aircraft. 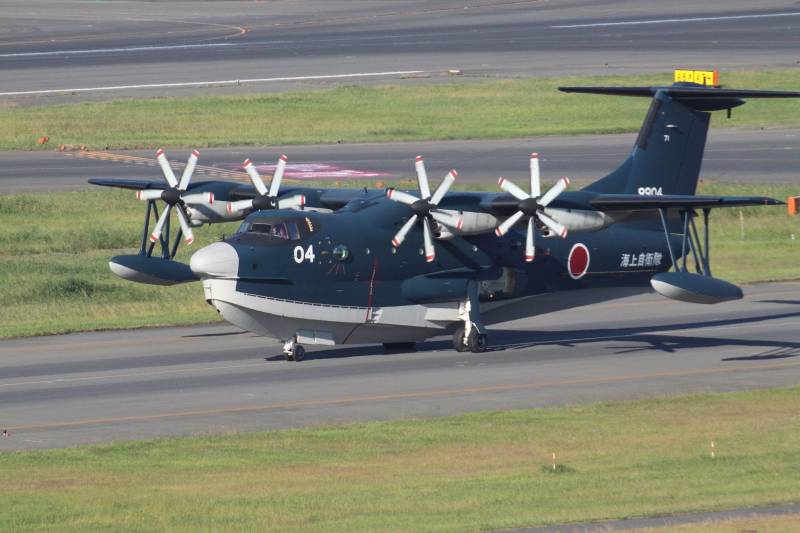 Work on the further development of the US-1A seaplane was launched in Japan in the 1996 year. In the course of these works, the ShinMaywa US-2 amphibious search and rescue aircraft appeared (it originally wore the designation US-1A Kai; the company designation of SS3). The aircraft, designed for the Japanese fleet, is produced literally by the piece. From 2004 to 2017, Japanese naval aviation received two experienced and five production aircraft, the US-2. Funding for the sixth aircraft in the amount of 156 million dollars was made in 2013 year. In this case, one of the serial seaplane crashed 28 April 2015 of the year. As part of the Japanese Self-Defense Forces, amphibious aircraft US-2 are in service with the 71 search and rescue squadron of the 31-wing of the fleet aviation, they are based on the air bases in Atsugi and Iwakuni.

One of the reasons for the intensification of work on the creation of an upgraded version of the four-engine seaplane US-1A was the lack of funding for the creation of a new amphibious aircraft US-X. The assembly of the first prototype of the new aircraft began in the year 2000. 22 April 2003 at the Konano Aviation Plant near Kobe held the official rollout ceremony of the first prototype. In addition to the prototypes, two fuselages of an amphibian designed for static tests were also created. The first flight of ShinMaywa US-2 made 18 on December 2003 of the year, it lasted only 15 minutes. Official military trials began in April 2004, with the 2007, the aircraft is mass-produced.

The aircraft received a completely sealed cockpit, more powerful engines Rolls-Royce AE2100J, developing the power of the 4600 hp. each, the crew cabin received new equipment. The “glass cabin” principle has been implemented, the crew members have modern LCD panels. A large number of improvements have been made to the design of the aircraft, making it possible to expand the possibility of its use in inclement weather (based on the operating experience of the predecessor aircraft). The design of the wings was also changed, with fuel tanks integrated into them. In addition, US-2 is the only seaplane in the world with a boundary layer control system (Boundary layer control, BLC), which employs an additional LHTEC T800 engine with an 1364 hp power. Thanks to this system, the aircraft can fly at very low speeds (of the order of 90 km / h) and take off and land from the water, being content with a very short distance for this. 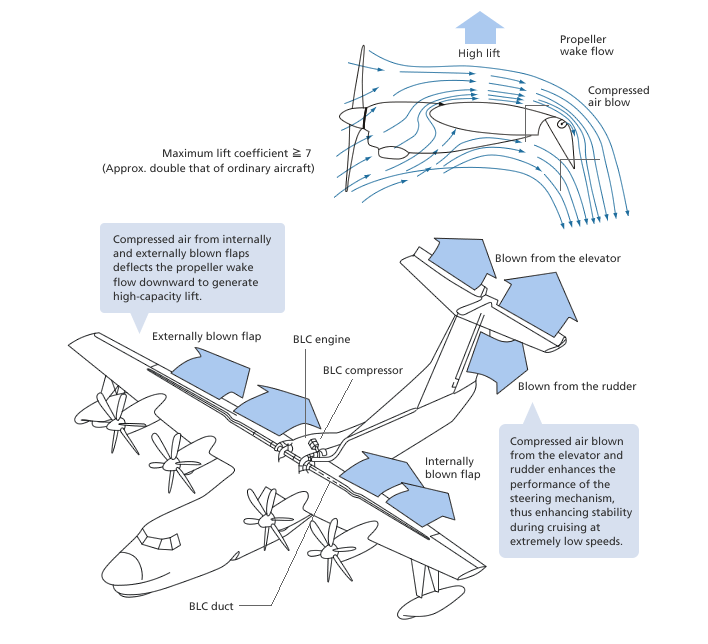 Amphibian ShinMaywa US-2 is a four-engine cantilever high-wing with a straight wing, to increase stability on the water on it there are floats, and a T-shaped tail. The fuselage is a tight all-metal type of semi-monocoque. The installation of the new Rolls-Royce AE2100J turboprop engines has increased cruising and maximum aircraft speed The aircraft can accelerate in the sky to 560 km / h, cruising speed is more than 480 km / h. At the same time, it can cover distances greater than 4500 km. Japanese seaplane is big enough. The maximum length of the US-2 is 33,3 meters, the wingspan is 33,2 meters, the maximum take-off weight is 47,7 tons. In size and weight, it exceeds its two main competitors - mass-produced seaplanes CL-415 (Bombardier) (Canada) and Be-200 (Russia). But very soon he will give way to the championship of another production model - the Chinese amphibian aircraft AG600which made its first flight 24 December 2017 of the year.

A distinctive feature of the US amphibious aircraft US-2 is excellent seaworthiness. This is the only aircraft in the world that can take off and land on the water when the sea is rough at 5 points and the height of the waves - 3 meters. The manufacturer emphasizes the fact that the aircraft can be operated at wave heights up to the height of the aircraft itself (the height of the US-1 is 3 meter) up to 2 / 9,8. This is especially important for the search and rescue machine, which is designed to help and save lives, even in harsh conditions. For comparison, the Be-200 can only be used at wave heights up to an 1,2 meter.

Indicative is the participation of US-2 in the Indian tender for an amphibious search and rescue aircraft, which the Japanese seaplane won in 2014, although the supply contract has not yet been concluded. In addition to US-2, the Canadian company Bombardier Aerospace with the Bombardier 415 aircraft, Rosoboronexport OJSC and TANTK named after G.M. Beriev ”with the Be-200 aircraft and the American firm Dornier Seaplane Company, which proposed an updated draft of the SeaStar CD2 aircraft. As experts noted, with the appearance in the Indian tender of the Japanese US-2, its result was foreshadowed in favor of the latter. The reason is the fact that the US-2 amphibious aircraft from ShinMaywa has outstanding takeoff and landing characteristics due to the use of a unique wing boundary layer control system on the wing driven by an additional fifth engine and excellent seaworthiness, superior to its competitors. A Japanese seaplane with a take-off weight of 43 tons is able to take off from the water with a takeoff of just 280 meters and land with a run - 330 meters. 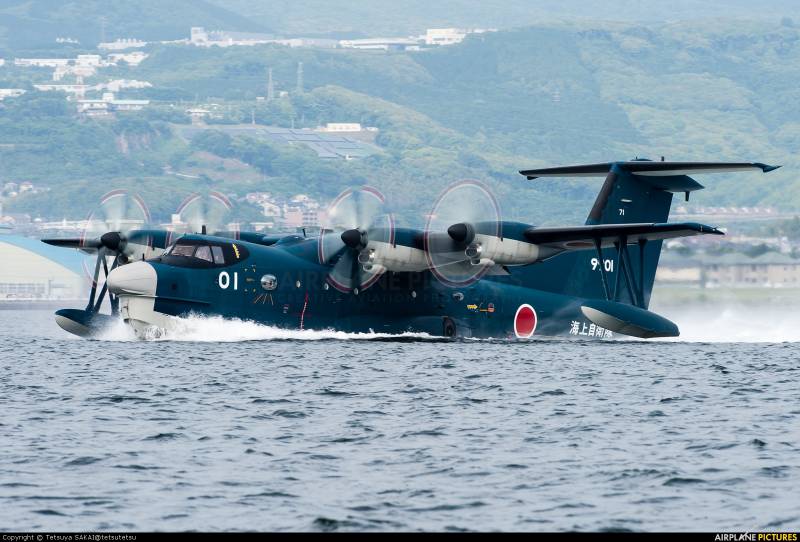 In addition to the existing US-2 amphibious search and rescue variant, ShinMaywa has also been promoting two other aircraft types to the market since the 2006 - the passenger version (capacity from 38 to 42 seats) and the fire-fighting option. A seaplane can safely be called a multi-purpose, after minor upgrades it can be used for transporting passengers and cargo, transporting the wounded and injured, patrolling the ocean and using it to help those who are injured in emergency situations. In 2010, the aircraft manufacturer declared the cost of a flying boat in the “commercial” version at the level of 7 billion yen (about 90 million dollars). 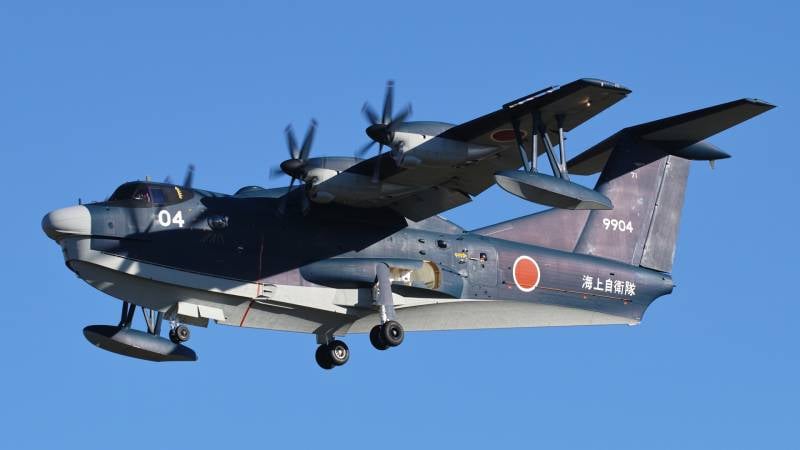 Information sources:
http://airwar.ru/enc/sea/ss2.html
https://bmpd.livejournal.com/709587.html
http://nevskii-bastion.ru/shinmaywa-us-2
http://www.shinmaywa.co.jp
Open source materials
Ctrl Enter
Noticed oshЫbku Highlight text and press. Ctrl + Enter
We are
Why does Japan strengthen the Self-Defense Forces?The global crisis and the “yellow threat” led to the arms race of the countries of the Asia-Pacific Region. Part of 2
25 comments
Information
Dear reader, to leave comments on the publication, you must to register.