Erdogan received a "first Chinese warning" from the Armed Forces of Syria. What happened at Hadera? 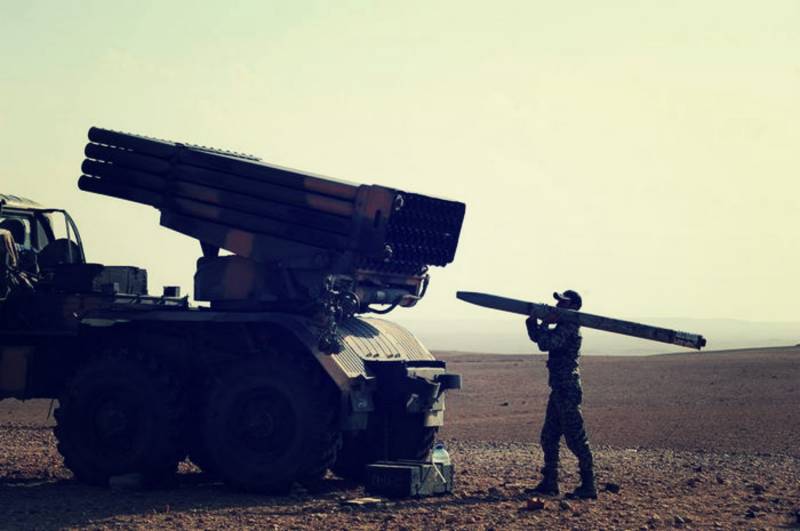 Despite the hopes initially assigned by high-ranking representatives of the Foreign Ministries of Russia, Syria and Iran, which was held from 29 to 30 in January, the Syrian National Dialogue Congress, neither the diplomatic nor the military-political concept of resolving the situation in the Idlib region and the canton of Afrin (Aleppo province) could not reach a level that allows the formation of the so-called Commission to discuss the constitution of Syria. The only moment that was implemented during this congress was the selection and coordination of 150 candidates for the creation of the aforementioned commission, the 100 people from whom will represent the government "front", and the opposition forces around 50. When considering the situation without a certain degree of engagement and in more detail, the quite adequate question arises: on what grounds are opposition forces in the CAP given the right to vote, and especially in matters of updating the Syrian constitution? After all, we all know well that the representatives of this opposition, supported by Turkey, continue to probe the defense of the Kurdish YPG detachments of the peaceful canton of Afrin to seize these lands. Moreover, the armed forces of the FSA ("Free Syrian Army"), patronized by representatives of the opposition, have already made many attempts to seize ATS settlements in the provinces of Idlib and Aleppo.

What is even more interesting, the high-level opposition negotiating group HNC (High Negotations Committee), as well as representatives of the SNC (Syrian National Council), actively cooperating with the FSA and other anti-government armed groups, decided to refuse to participate in the congress, calling it negotiations “Regime with regime”, while another group of anti-Assad delegates from Turkey boycotted the meeting immediately after arriving in Sochi, arguing their decision with “hateful flags” present on the logo of Gressa. In such a position of the opposition forces, the belligerent and unshakable position of the Republic of Turkey is clearly visible, which does not benefit from “freezing” the conflict with the canton of Afrin, nor suspending the “pumping” of the “Idlib gadyushnik” with weapons, because without looking at any agreements with the Russian Federation, Erdogan does not plan to retreat from the undisclosed part of the military operation “The Euphrates Shield” launched at the end of 16 of the year. As you remember, during the announcement of its launch, the Turkish president paid attention to the fact that one of the main tasks of the “Euphrates Shield” is to overthrow the regime of Bashar al-Assad. With this in mind, Tayip operates today.

Vivid evidence of this is not uninteresting events that occur during the last week of January in the northern and western parts of the Idlib Gadyushnik, divided into sectors of control of the Dzhebhat al-Nusra (Hayat Tahrir ash-Sham), scattered groups of armed "moderate opposition ”, As well as the pro-Turkish“ backbone ”of the FSA (CCA). About a week ago, according to the information on the syria.liveuamap.com online map, as well as some Kurdish and opposition resources, a huge military convoy of the Turkish army, which included KIRPI (4X4) armored vehicles and armored infantry fighting vehicles, entered the province of Idlib. more than a hundred infantrymen. The column proceeded from the Turkish checkpoint "Reyhanli" (Hatay province) in the direction of the city of Al Ays, located near the city of Khader (near the front line) controlled by the Syrian Arab Army.

The convoy stopped and took a wait-and-see attitude, as reported by eyewitnesses from Al-Ace. Obviously, in agreement with the Turkish armed forces, the Dzhebhat an-Nusra formations and the armed opposition were supposed to “soften” the defense of the Syrian army, partially exhausting artillery batteries and fortifications in the vicinity of Hadera, after which the Turkish army’s infantry formations from the convoy planned to seize this city "On the quiet" of mayhem "an-Nusra". Later, it became clear that the command of the Turkish Armed Forces greatly underestimated the CAA, apparently counting on the same neutral reaction as in the situation with the attack on Afrin. This was the strategic miscalculation of the Turks. 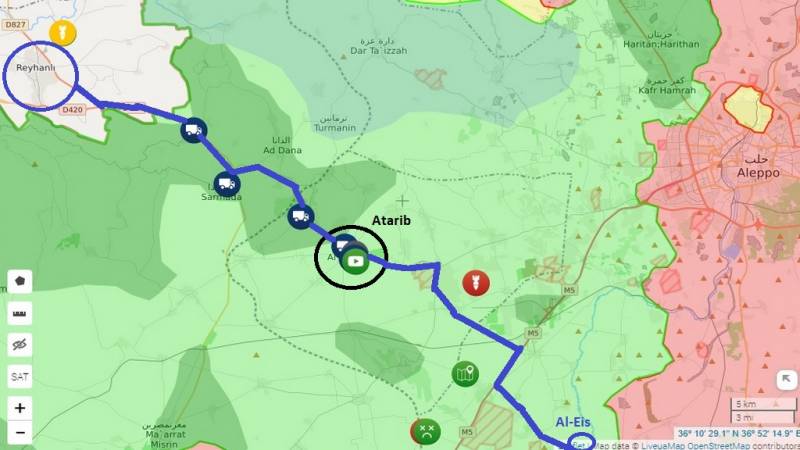 The route of the Turkish military convoy (map syria.liveuamap.com) 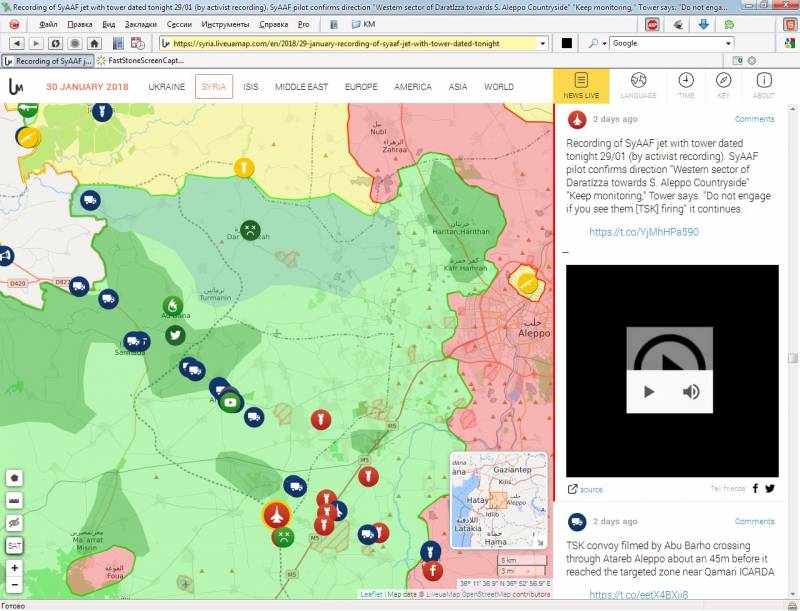 Tactical situation on the border of Aleppo and Idlib on 29.01.18. The light green area is the territory controlled by en-Nusra and other terrorist groups, the yellow is the southern sector of the canton of Afrin, the red is the territories liberated by the Syrian Arab Army. The blue “markers” reflect the locations of the Turkish convoy (there is a complete coordination of the actions of the Turkish Armed Forces with the terrorists from Tahrir ash-Sham), the red “markers” are the points of the AAA’s retaliatory artillery strikes against the terrorists and the promotional convoy

In the evening, 29 in January, red “markers” appeared on the syria.liveuamap.com map in the Al Ays area, denoting artillery strikes by the Syrian forces on the Kammari - Al Ais motorway, where the Turkish convoy was located. 2 days later, the well-known News Front resource, citing Syrian sources, reported that the Syrian Arab Army units advancing on the occupied Tahrir ash-Sham settlements of Foix and Kefrai faced a large mixed group of the enemy, among which were the al-Sham militants, as well as the Turkish military, who opened up heavy-caliber machine-guns and mortars at the assault forces of the government forces. The Syrian army responded with a powerful artillery "otvetku" from the positions deployed near Hadera, after which the Turks fired 7 NURSs in units of the Syrian army in Hadera (the type of missiles is not reported).

According to local sources, after the fire from the Turkish convoy and the Tahrir al-Sham terrorist groups, a tactical airspace appeared aviationwho worked for the convoy and terrorists in the ICARDA area (along the M5 “Damascus-Aleppo” motorway), as well as north of El Ais; she was supported by the Syrian barrel artillery. It is not known exactly whose aircraft operated according to the Turkish convoy and al-Nusra (Russian Air Force or Syrian Air Force), but the effect was already visible after a few hours. The convoy, consisting of almost 100 units, immediately began to return to the side of Kanatir, and later completely went back to Hatay. During retaliatory strikes by the Syrian artillery and the Air Force, several pieces of equipment were destroyed and damaged. 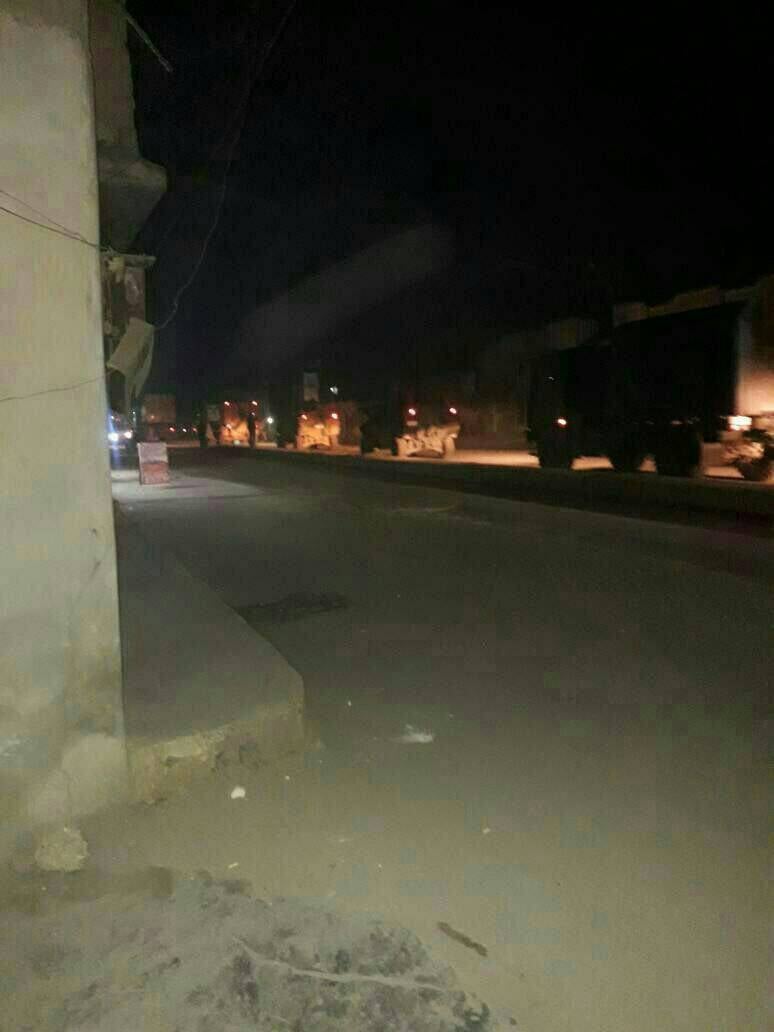 Return of the Turkish convoy towards Kanatir

As for the incident with the attack on the retreating convoy of the Turkish Armed Forces in Al-Atarib (the northern territories of the Idlib opposition-terrorist "enclave"), everything here remains under a veil of secrecy. The Turkish side, without any hard evidence, laid the blame on the YPG detachments from the Afrin canton, which are completely irrelevant to the north of Idlib, because the southern border of the Kurdish enclave is in 20 km north of the sector controlled by the Free Syrian Army. Later, responsibility for the attack on the convoy took over the IS, which the Al-Atarib area has not been controlling for a long time. In fact, having long-standing ties with LIH, the Turkish side could well have asked igilovtsev such a statement to divert media attention from a more resonant armed clash with the Syrian army near Hadera. Naturally, Ankara did not raise the hype around the incident under Khader, because the actions took place with the involvement of terrorist groups and in violation of all de-escalation agreements; And in the case of Afrin, Turkey’s reputation is very tarnished.

The countermeasures of the Syrian government forces implemented against the Turkish convoy and the accompanying Tahrir al-Sham 29 militants of January will have a sobering effect on the military leadership of Turkey, which will begin to more thoroughly analyze the possible consequences before boldly overstepping all limits permitted under international agreements on de-escalation into the SAR for its own territorial advantage.

Ctrl Enter
Noticed oshЫbku Highlight text and press. Ctrl + Enter
We are
Ankara went to unexpected measures in an attempt to beat Moscow and Damascus. Commando and "al-Nusra" in Tayip's cunning planBonuses from the possible failure of the "Olive Branch": the United States is looking for tools to deploy contingent in the west of Aleppo
69 comments
Information
Dear reader, to leave comments on the publication, you must to register.