January 31 2018
18
For the Indian Navy built a third submarine type Scorpene. According to the portal indiatimes.com, at the shipyard of Mazagon Dock Shipbuilders Ltd, located in the city of Mumbai, a solemn launching ceremony of the Karanj submarine took place.

Launching the Karanj submarine marked a significant departure from the philosophy of manning and training sailors, which was adopted for the first two submarines. Starting from the third submarine, our fleet will be completely independent in training and certification processes.
- said the commander of the Indian Navy, Admiral Sunil Lanba. 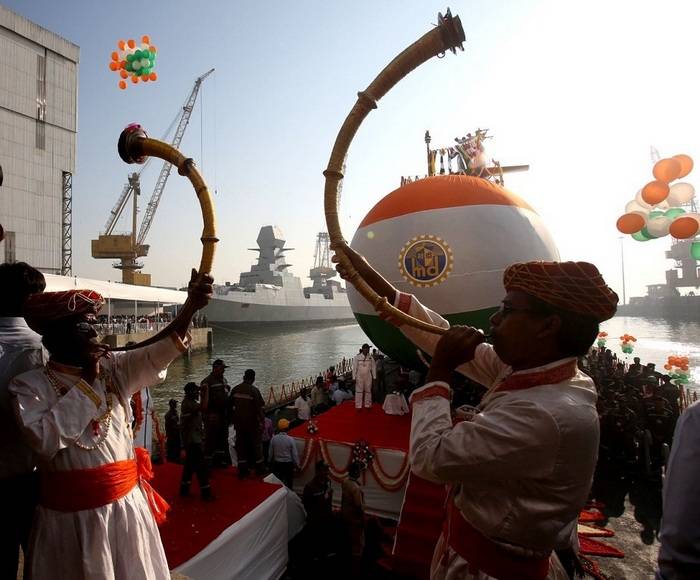 A contract worth $ 3 billion for the licensed construction of six non-nuclear Scorpene-type submarines was concluded by India with the French shipbuilding association DCN (now DCNS) in 2005. Under the terms of the agreement, six boats, which were to be built at the MDL plants with the assistance of DCNS, were scheduled for delivery to the Indian Navy in 2012 – 2018. However, the construction program was significantly delayed due to technological problems of the Indian side, as well as disagreements with the French regarding the amount of assistance provided.

Submarines of the Scorpene type were designed by the French company DCNS for the needs of the French Navy, but after the French military department abandoned diesel-electric submarines in favor of nuclear ones, the project became an export one. The first submarine of the Scorpene type for the Indian Navy was commissioned in December last year. More than two years have passed since its launch into service, since there were no heavy Black Shark torpedoes - the main armament of these submarines. The tender for their purchase was canceled in May 2016, due to a corruption scandal. What kind of torpedoes Indian submarines are arming now - they don’t specify in the military, reports "Warspot"