"Our army turns into student and workers' and peasants"

April 30 2010
2
The head of the Center for Military Forecasting - about the correct age of conscription, the "wrong" contract servicemen and the real enemies of Russia 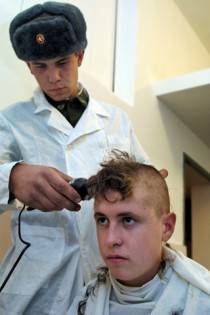 DeputyChiefand the Russian General Staff, Vasily Smirnov, said that the Ministry of Defense proposes to extend the term of spring conscription of citizens for military service until the end of August, raise the bar of military age from 27 to 30 years and make a number of other changes to the recruitment system of the Armed Forces. The main reason is that the Russian army lacks draftees. The head of the Center for Military Forecasting of the Institute for Political and Military Analysis, Anatoly Tsyganok, comments.

Russia has now entered the demographic hole, and in this hole it will be at least 5 – 6 years old. In this situation, it was necessary to clearly understand what kind of army we need, but first determine what real threats exist.

We are told that NATO is an enemy, but in fact it is not. NATO reduced its grouping by about 60% (however, the Russian army also reduced Moscow and Leningrad districts - by about 40%). And the real enemy is where there are conflicts - and they are in the south, with our southern neighbors.

Once we have entered the demographic hole, we can get out of it in two ways. Either calculate which army is needed and reduce the call, or do not count anything and increase the call. We will go for the worst option if we increase the term of the call to 30 years and deprive all students of any concessions.

Optimization of military education, which provides for a reduction in the number of military departments from the current 229 to 68, will cause enormous damage in the training of specialists in new specialties for the Russian army. The Minister of Defense made a decision to unilaterally sever relations with the Ministry of Education, warning that military departments would remain in 35 Russian higher educational institutions, where reserve officers will be trained. In 33 civilian higher educational institutions, the military departments will be transformed into military training centers (UCEC), which will train both reserve officers and officers for service in the Armed Forces.

At first glance, it is logical to reduce redundant, in the opinion of the military, military departments and the student army in 170 000 people who are currently being trained in these departments when there is a surplus of reserve officers: in many years, they have prepared mobilization kits for some specialties.

In fact, the transition to a new system of training reserve officers introduces the division of universities according to their attitude to military service into three grades. Graduates of "high school 1 grade" (the ones where the military department will remain) at the end of the military department will immediately be sent to the reserve. This list includes 12 metropolitan universities, five of St. Petersburg, two schools of Kazan and Novosibirsk, and one more from 14 cities of Russia.

The “second grade” includes 33 high school, when entering into which young people will enter into a contract with the Ministry of Defense. The contract means for them an increased scholarship in the period of study (five times higher than the federal one) and service in officer positions for at least three years. If the graduate wants to terminate the contract, he will have to return the scholarship in full.

The rest of the universities belong to the "third grade". Their graduates will be recruited and serve in the army in rank and file. In fact, it is about introducing (albeit behind the scenes) a kind of property qualification: coming from rural areas, even if gifted and talented, but having no means (it’s almost impossible to enroll in Moscow or St. Petersburg university with peripheral education without a bribe) posts. Urban young people in the complete absence of abilities have the opportunity to either avoid conscription altogether, or, having received an education in an elite university, immediately go to the reserve. The army at the same time turns into a "student - workers' and peasants". The logic of the army leadership is simple and clear. “We don’t need a platoon commander trained in a civilian university, but intellectual officers, programmers, computer scientists are needed, and in fact, they will do the same thing as in“ civilian ”, but only in military uniform from 9: 00 to 18: 00, ”said Nikolai Pankov, the head of the Personnel and Educational Service. It would be nice - but in real life it does not happen.

Without dwelling on the moral assessments of such an arbitrary division of higher education institutions in Russia, I think that these lists need serious adjustment for the simple reason that it undermines both the security of Russia and the combat readiness of the army.

In which regiment to serve

I have been teaching for many years and conducted a survey among students of 1-3 courses in my time - they absolutely refuse to go to the army. But the students of the 4 and 5 courses are ready to serve. It must be understood that the boy who goes to university in 18 for years, and almost the man who graduates in 23 for the year, are two completely different people. I am convinced that in Russia you need to change the age of conscription. Previously, the service was taken in 21 year. The fact is that a boy between the ages of 18 and up to about 21 has conflicts with the whole world, including himself. But if you give a person the opportunity to complete his studies, then by the 23 years he will most likely graduate from high school, and who does not want to study will never be. We need to achieve two things: to allow a person to get a higher education and at the same time enable our military-industrial complex to teach highly-educated specialists in military affairs.

But for this the army needs to be reformed, modernized.

The army, in essence, cannot carry out modernization. I think that it is necessary to do what Peter I. did. He understood that the archery troops were not being modernized. He left them and began to create two regiments — Semenovsky and Preobrazhensky. From these regiments grew new Russian army. Russia now had to do the same: leave the army, which is not being modernized, and start creating new separate units and divisions. But Russia is trying to create a new army structure and build a new weapon system — although it has not already implemented the new weapons program three times.

Now we must first give our military-industrial complex samples of the weapons that the army really needs. The military-industrial complex should create this weapon - and give priority to schools and academies. And when officers and sergeants learn how to handle it. weapons A new sample, it should start to flow in parts. And only then can we talk about reforming the army.

Today the Minister of Defense is completely unsuitable. The fact that he is trying to establish contact with society is completely understandable. But the way he does it is surprising to me. All the flaws in the structure of the Russian army are now completely obvious. When the head of the personnel department cannot explain what they should train in military schools and academies, this is puzzling and suggests that the person simply does not know the subject for which he is responsible to answer.

Military science is spent. This year there will be no military intellectuals in the Russian army. A military intellectual is a person who has studied at a school, then at an academy, after which he graduated from the Academy of the General Staff. All the commanders of divisions, regiments, individual battalions had an academic education. Now the situation is quite interesting: they reduce the courses to one year, explaining that to the lack of listeners. I am convinced: it is impossible to get an academic military education in one year. Trying to train a specialist with a higher military education in one year is useless. In this case, we do not pay attention to the soldiers. We do not understand for what purposes our army serves, we did not consider how much soldiers and sergeants we need, we could not prepare military equipment, and we still do not have a good regulatory framework. In addition, we are talking about a contract army. Personally, I am categorically against such an army. Contract soldiers are recruits who could not get a job. We seriously lumpenize the army institute.

I have a very negative attitude to the proposals of the Ministry of Defense. First we must identify the threat. After that, it is necessary to determine the composition of the army - this is impossible to do without understanding the threats. If we can deal with at least these two points, the contract will be halved.