January 31 2018
26
Russia and China are at this stage opponents of the United States, challenging American interests, the economy and values, reports TASS Statement by US President Donald Trump. 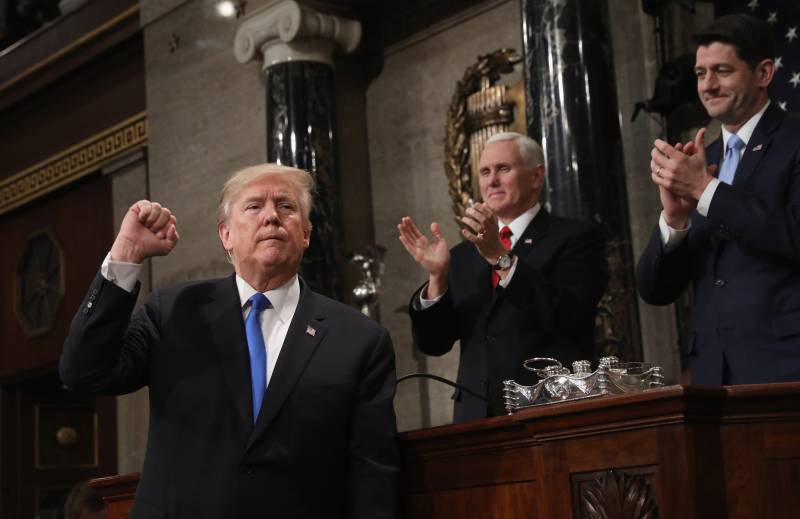 In the world, we are confronted with rogue regimes, terrorist groups and rivals like China and Russia that challenge our interests, our economy and our values,
Trump said, speaking with an annual message to the US Congress "On the situation of the country."

According to him, America needs to upgrade its nuclear arsenal.

We must modernize and rebuild our nuclear arsenal, relying on the fact that we will never have to use it, but making it so powerful that it will contain any acts of aggression,
declared the president.

He noted that at this stage the idea of ​​a nuclear-free world is unattainable.

Perhaps in the future a magical moment will come when the countries of the world will unite to eliminate nuclear weapons. Unfortunately, we have not come to this yet,
said trump.

He also spoke out against cuts in the country's defense budget.

I ask the US Congress to stop the practice of sequestering the US military budget and fully fund our military,
said the president.

The agency recalls that the threat of military budget sequestration arose from the fact that the Republicans and Democrats could not agree among themselves on the approval of a full-fledged budget for the 2018 fiscal year, which began even 4 a month ago. So that the government’s activity has not stopped, lawmakers are forced to enact laws on the temporary financing of federal ministries and departments. The validity of the next (already the fourth) delay expires on February 8.

As for the Pentagon, members of Congress at the end of 2017 of the year approved the country's maximum level of military spending in the amount of almost $ 700 billion for the current fiscal year. However, the bill on the allocation of these funds has not yet been approved.