Davos turned back to Kiev

January 31 2018
15
The 48 World Economic Forum last week in the Swiss Davos ended for the Ukrainian delegation almost scandalously. World media is still in different ways savor the refusal of US President Donald Trump to meet with the head of Ukraine Petro Poroshenko. This embarrassment was prepared by the Ukrainians themselves. A week before the forum, Ukrainian Foreign Minister Pavel Klimkin urged everyone that full-fledged bilateral negotiations were prepared in Davos, and not a meeting on their feet. Did not happen. 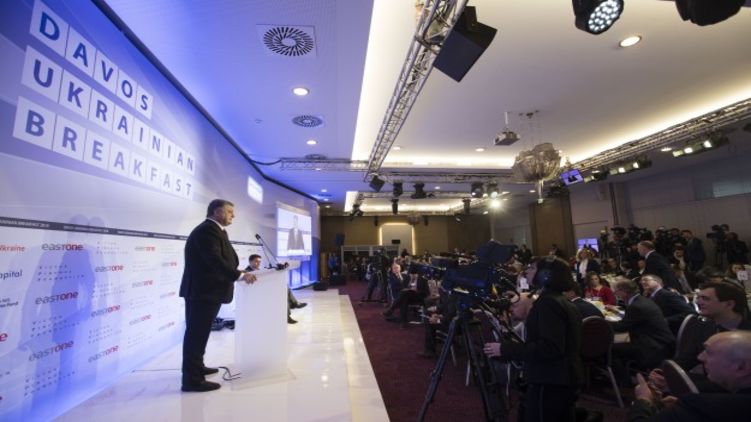 Donald Trump flew away without seeing. Instead, Poroshenko met and held "substantive and constructive negotiations" US Secretary of State Rex Tillerson. Ukrainians took advantage of this meeting in full. They had such an important photo session with an American partner, and Petro Poroshenko pleased the Ukrainian media with another comment on the “full support of the United States” of his policies.

Behind this propaganda hype from public attention the main thing was covered. The Ukrainian delegation returned home without investment contracts and agreements common for such a voyage. They were replaced by the Poria Poroshenko business breakfast with 80 potential investors that had been pushed into all propaganda pipes.

As the executive director of the Blazer International Fund, Ukrainian economist Oleg Ustenko, after last year’s Davos, Kiev barely scored $ 2.5 billion in foreign direct investment. Ustenko called them “starvation rations”. After all, "in the recent stories The countries were years when 10 billions of dollars of investments were pumped into us. Even then it seemed to me that this was not enough, ”the expert now laments.

The flow of capital into dollar positions in America itself, initiated by Donald Trump, left Ukraine today without such a small investment. News sad. Especially against the background of the growing debt crisis. As another Ukrainian economist, Viktor Skarshevsky, thought that in 2018-2020, Ukraine needed to repay $ 26 billions.

“As early as February 2018, Kiev should pay the IMF $ 450 million,” Skarshevsky draws bleak prospects. “And the total payments on foreign debts will amount to $ 7 billion, and that is without $ 2 billion, which Naftagaz may have to pay to Gazprom and $ 3 billion of Russian debt.”

The expert recalled the practice of Natalia Yaresko, the first Minister of Finance of Ukraine, of Ukrainian-American origin, and came to the conclusion: “We will have to sit down again at the negotiating table, negotiate restructuring, otherwise everything goes to default in 2019”.

It is unlikely that the authorities in Kiev will listen to this advice. They are quite satisfied with the cancellation of debt by obtaining new loans. There is no big economic reason for this practice. But clearly visible personal gain. She was noted by the Blazer Foundation already mentioned here. According to the fund, “during 2017 of the year, through various corruption channels in Ukraine, it was distributed from 5 to 10 billion dollars.”

Therefore, in Davos, Petro Poroshenko diligently courted the IMF Managing Director Kristin Logard. However, the selfie with her also turned out to be a failure and did not bring the expected credit tranche. However, the head of the Ukrainian delegation in Davos did not lose his ostentatious optimism.

“Probably,” Poroshenko’s fingers crossed the journalists superstitiously, “we’ll have a mission by April and we will receive the next tranche.” We at 80% have fulfilled the requirements of the Foundation and are determined to carry out further reforms. ” The President of Ukraine did not decipher what reforms he has in mind. Commentators agreed that this is, first of all, the fight against corruption, which is tormenting the country's budget today.

This situation does not add to Ukraine investment attractiveness. Moreover, work in Kiev, as well as economic contacts with him, in modern terms, make such persons and companies "toxic." There is no need to go far for examples. You can once again recall Natalia Yaresko, who ingloriously returned overseas as an ordinary employee of the Eurasian Center of the Atlantic Council.

“Vlyapalis in Ukraine” not only misled officials, but also world business giants, who, according to columnist Vesti.ua Taras Kozub, ruined their reputation because of the work in Kiev. “For four years, the new Ukrainian authorities managed, if not to“ bury, ”to significantly damage the reputation of dozens of serious international companies who risked coming and working in our country,” Kozub said.

RothschildTrust, who agreed to take over the management (“blind trust”) of President Poroshenko’s business, is considered to be the first in the series of discredited ones. It soon became clear that under the guise of a reputable international company Poroshenko went offshore to optimize taxation. So he multiplied his capital, including through the use of the resource of presidential power.

The second in terms of resonance was the scandal over the verification of the activities of PrivatBank by PriceWaterhouseCoopers, a company included in the Big Four of international auditing. At the beginning of 2016, PwC issued a conclusion to the bank about its financial well-being, and at the end of the year, the National Bank of Ukraine (NBU) declared PrivatBank insolvent.

Kiev authorities, "saving the largest Ukrainian financial institution," announced the nationalization of PrivatBank. In turn, the NBU accused PwC of frauds with assets of PB. According to the National Bank, the auditors deliberately overestimated the pledges of the bank - "many times more than their real value."

PriceWaterhouseCoopers was deprived of licenses to work in the country and excluded from the register of audit firms eligible for bank inspections. In vain the auditors appealed to the public, convinced her that the Kiev authorities did not nationalize PrivatBank, but simply “expropriated”. At the same time, they intentionally used the methods of the NBU, which did not take into account the decline in the country's economy. PwC nobody heard, and did not listen. But for the company for a long time the “spot” of the unfair auditor was fixed.

Another case is connected with Colliers International, one of the three world leaders in the provision of real estate services. The Ukrainian National Agency for the Identification, Search and Management of “Corruption” Assets (ARMA) has attracted it for joint activities.

Experts noted that ARMA provided CI with the ability to manage assets without participating in tenders and following other mandatory procedures. Further investigation showed: Colliers International is only the Ukrainian franchise of a well-known company, which received from it for a fee the right to conduct business under the CI brand.

The franchise company itself has a rich ancestry, leading through the Cyprus offshore companies to the NSDC Secretary Alexander Turchinov and his associates. Therefore, she allowed herself the liberties of dealing with real estate, often reminiscent of raider attacks. This activity did not add authority to Colliers International and shaken its position in the international market.

The world has already heard about these and other stories orally and through the press. The Washington Post, for example, made an unpleasant conclusion for its readers: “Even a Nigerian prince will envy corruption in Ukraine.” It is not by chance that companies that come to work in Ukraine “do not have the best fame in the world.”

These companies, according to expert Ruslan Bortnik, “cannot work effectively without involvement in corruption or awareness of the processes”. In other words, being in Ukraine for foreign business is “always having a certain stain, pollution of reputation”. Is it any wonder after this that “potential investors” limited themselves in Davos to a business breakfast with President Poroshenko?

The Ukrainian delegation went home without the concluded treaties and agreements. This is the best evidence of the degradation of the investment climate in the country, its apparent "toxicity" ...

Ctrl Enter
Noticed oshЫbku Highlight text and press. Ctrl + Enter
We are
One - Davos, the other - manure ...I, I, Kemskaya parish!
15 comments
Information
Dear reader, to leave comments on the publication, you must to register.