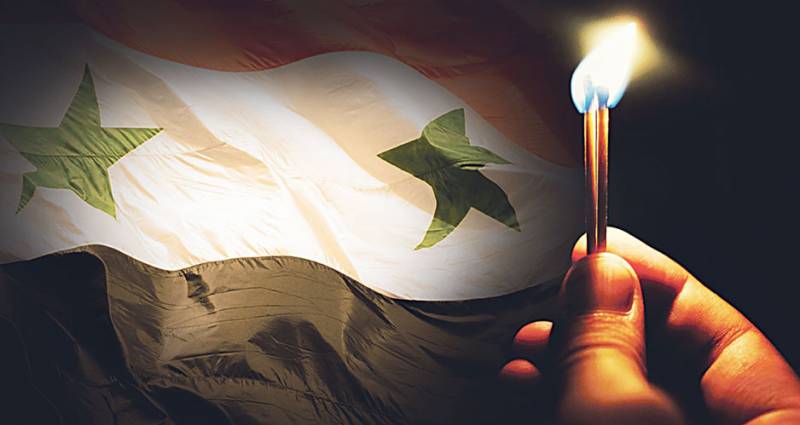 Two coalitions fought in Syria. The participants were united by one strategic goal - to overthrow the current government in the UAR. The other did everything to preserve the integrity of the country and its sovereignty.

The coalition of aggressors initially had deep contradictions, which to a decisive extent neutralized its economic, technical and strategic superiority. The interests of the defenders of Syrian statehood largely coincided, and this made it possible to effectively interact, which determined their success by the end of 2017.

Syrian Gazavat began in 2011 year. However, the most interesting stage when it intervened Russia. Thanks to the efforts of advisers, the Syrian army began to turn into a full-fledged military tool capable of conducting successful military operations against such a serious adversary as the IS (banned in the Russian Federation). At the same time, the armed forces of the United States, Turkey and other members of the Western coalition began to actively operate on the territory of the SAR.

The political goals of the aggressors differed, as did the forces and means involved, the weapons and military equipment, the particularities of manning and the methods of actions of the formations. The coalition was a rather complex structure. It has two specific components. The first is a union of states and a community of illegal armed groups. The main burden of fighting lay on the illegal armed groups, the first mainly giving them logistical, financial, informational and political support, for which the USA, Turkey, Saudi Arabia and Qatar were spent. This coalition was supported, Israel did not directly intervene in the conflict on a large scale. The second component includes the IG, “Dzhebhat en-Nusra” (also banned in the Russian Federation) and the Syrian Free Army. Al-Qaeda, as such, was clearly not functioning, as its subsidiaries played a major role. In addition to large terrorist organizations, a number of small ones robbed the SAR.

Religious Islamic, Pan-Turkic and liberal pro-Western components stood out on the basis of the religious ideological basis. Each had a curator state. The former saw the main purpose of creating a Sunni caliphate in Syria and Iraq under the auspices of KSA or Qatar. The second, represented by Turkey and the pro-Turkish IAFs, prepared the ground for the reconstruction of the Ottoman Empire. One of the stages was to be the intake of part or even of the entire territory of Syria under the auspices of the new Brilliant Ports. The political goal of the third was to turn the country torn apart by civil war into a bridgehead of the West, primarily the United States, which by 2015 had greatly lost influence in the Middle East. At the same time, there was and still is a struggle for leadership in the Islamic grouping. Fighting mainly KSA and Qatar for control over the leading terrorist forces.

A special place is for the Kurdish formations, which clearly did not pursue the goal of overthrowing the legitimate authorities and still wanted to secede from Syria, at least to gain wide autonomy, which is unacceptable for Damascus or Ankara.

The aggressor coalition, although mired in contradictions, was united by the desire to overthrow Assad. But during the fighting, various formations of opponents of the Syrian president began to clash. In particular, the radical Islamists defeated the Free Syrian Army, which the Americans then had to recreate. Those after the final loss of control over the IG and other radical groups even joined the fight against the Islamists. But the US goal was not to defeat, but to control, which explains the desire to knock out some of the jihadist commanders, while retaining the most sane, on which Washington can influence.

We note the low intellectual potential of the Western and transnational elites behind them, the lack of a legal basis for large-scale and open intervention in Syria or an acceptable excuse for a military invasion.

To the strengths of the “aggressors” we will attribute significant economic and technical power, domination in the information sphere, dominant influence in international organizations, primarily in the UN. It is also important that the militants who fought on the side of the Western coalition were and remain ideologically and religiously highly motivated, as well as considerable masses of social groups sympathizing with them in other countries. Strong trumps should include their developed military infrastructure in the region, as well as a favorable strategic location for coalition members regarding theater operations - they border Syria on most of its borders.

The union of defenders of the Syrian statehood was made up of the SAR proper, Russia, Iran and the militarized organization Hezbollah. But each had its own goals. Iran is vitally interested in the preservation of Syria as the main regional ally, providing access to the Mediterranean Sea. Hezbollah’s support for Tehran is vital. With the fall of the Assad regime, Russia inevitably received a war in the near future in the Caucasus and Central Asia, and in the medium term, a loss of the European energy market, where Qatari gas would pour through Syrian ports.

Thus, the benefits of the countries included in the coalition boiled down to one thing: to ensure the safety of the Syrian state. Naturally, the “defencists” differently see the resolution of private issues, but there was no conflict of interests, which determined the coordination of actions throughout the war, the operational assistance to each other. This is the most important strength of the coalition. We also note the high military-technical level of the Russian Armed Forces, the ideological motivation of both the personnel of the Syrian army, who maintained their combat capability, and the formations of its allies, and the availability of resources for completing the SAR.

The strength of the "defencists" is the legal basis for the intervention of the Russian Federation in the conflict, providing our group with a basing system, albeit rather limited both in operational capacity and in the possibility of dispersing military equipment.

It should be recognized, of course, that our military-political leadership has demonstrated intellectual potential that is substantially superior to Western elites. This was largely due to the fact that the command of the operation was given wide powers.

However, the weaknesses of the "defencists" are much more serious. This is above all a lower economic and military-technical potential. We will take into account the modest informational capabilities, the poorly developed system of reconnaissance of theater of operations and its remoteness, the high dependence of logistics on the countries included in the coalition of “aggressors”: the main stream of military equipment went by sea through the Bosporus and the Dardanelles. Affected by the destruction of most of the military infrastructure of the SAR, the collapse of industry, the loss at the previous stages of weapons and equipment, ammunition, and other items of material and technical support for the troops, including fuel and lubricants, which required delivery from Russia.

Thus, the starting conditions for September 2015 of the year were extremely difficult for the “defencists” coalition. Success was possible only when loud victories were achieved from the first days, and later due to the rapid restoration of the Syrian armed forces' combat potential, organizing in the shortest possible time the interaction of the military formations of coalition participants specific conditions damage. Judging by the course and outcome of the confrontation, the “defencists” realized their strengths in full, in contrast to the “aggressors”.

Note that in addition to coalition troops and satellites in the SAR, tribal, clan, and local armed groups operated, ensuring the security of the territory, town or village.

Arsenals and powers of verbal operations

The complex of tasks of the “aggressors” coalition included the defeat of the Syrian army and allied formations, the elimination of any possibility for the emergence of large-scale popular resistance, the suppression of the will of the citizens of the SAR and the destruction of the military-industrial potential of the country. Accordingly, the key tasks of the "defencists" were primarily the preservation and restoration of the combat potential of the Syrian armed forces, the defeat of the main groups of illegal armed groups, the liberation from them of most of the territory of Syria and the prevention of the division of the country.

In the Syrian war, all types of weapons and military equipment, including weapons of mass destruction, were used.

Both sides at all stages actively used information weapon, which is determined by the high secrecy of its impact on the enemy and the lack of a legal framework that effectively regulates use. This was done to suppress the will of the enemy to resist, destabilize the domestic political situation in Syria, create the moral and psychological base of aggression inside the country and in the international arena, justify their actions before the population and personnel of the Armed Forces, as well as gain superiority in public opinion. An important task on the part of the illegal armed groups was and remains to be recruited into the militants, conducting terrorist attacks against other states.

The main means of warfare were conventional weapons. There is an international legal and moral-psychological basis for this, which allows and justifies their application. If the first is priority for regular armed forces, the second is more important for illegal armed groups, since it determines the attitude of local people to their actions in the database areas, as well as the possibility of support from government agencies. The Syrian army and the IAF used everything available in the arsenals. The United States and the Russian Federation, bound by domestic and international restrictions, are mainly the Air Force (USA) and the Air Forces (Russia), and for especially important tasks - the Special Operations Forces. Turkey to address the "Kurdish issue" at its borders in addition to aviation involved ground forces in Syria.

Chemical weapons have been used, and repeatedly, by jihadist militants. Strictly speaking, when there is no clear front line and fortified bands, but there is a concentration of large masses of troops in confined spaces, with actions mainly in residential areas, where the number of civilians far exceeds the number of personnel of opposing formations, the use of weapons of mass destruction is impractical. The damage to the enemy is small, and the moral, psychological and political losses are enormous. However, the Islamists agreed to this in an attempt to create a legal and moral basis for a full-fledged NATO military invasion. They failed to achieve this - provocations were too rough.

Fortunately, the case did not reach nuclear weapons. Although it can be assumed that its presence indirectly influenced the course and outcome of the war in Syria. Nuclear balance between the Russian Federation and the United States, with guaranteed mutual destruction, kept the powers from direct armed clashes in the SAR. If this happened, the third world would become inevitable.

Ctrl Enter
Noticed oshЫbku Highlight text and press. Ctrl + Enter
We are
A great interview with Sergey Lavrov: about Ukraine, Obama and IranWhat you didn't want to know about England
3 comments
Information
Dear reader, to leave comments on the publication, you must to register.